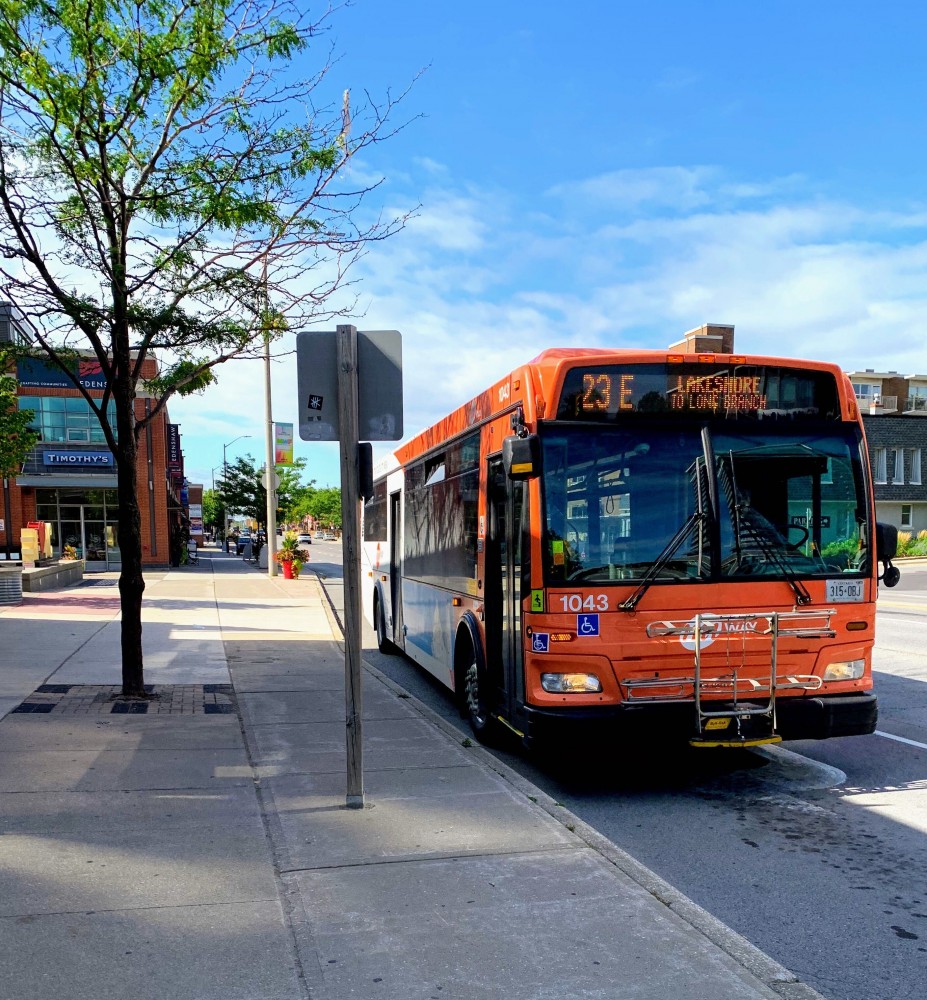 Photos from The Pointer files/Graphics and Renderings from Metrolinx

Mississauga has been offered a welcome boost for its future transit plans. On July 8, councillors voted to allow staff to enter into a cost-sharing agreement with provincial transit body Metrolinx to begin planning a rapid transit route along Dundas Street.

The agreement means Mississauga will pay half of what it was initially expected to cough up for studies and planning into a bus rapid transit (BRT) lane along one of its busiest streets. It also means the BRT will fit into a broader provincial plan to run a priority bus corridor from Kipling Avenue in Etobicoke across to the Village of Waterdown in the City of Hamilton.

A rapid transit route along Dundas Street is one of Mississaga’s transit priorities and is at the heart of its transportation goals for the next decade. The road has the second highest ridership for MiWay buses in the city with an average of 22,000 daily boardings. Only Hurontario Street is busier than Dundas, with construction already underway for the Hurontario light rail project to connect with bus travel to and from the spine road. 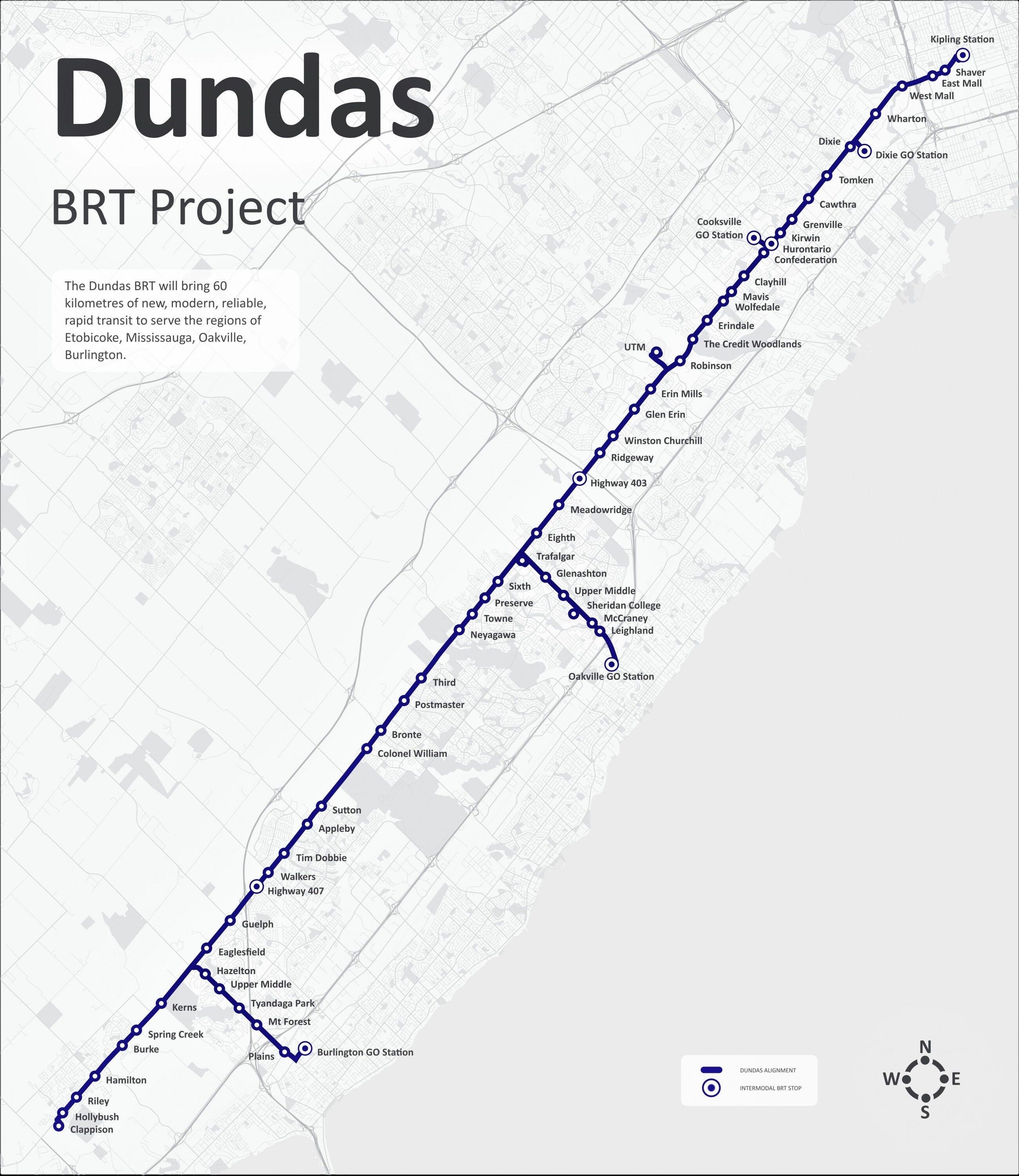 A map of the planned Dundas BRT project.

The Dundas route is particularly important due to its connections to the TTC subway in Etobicoke and, to a lesser extent, Oakville transit. Plans to open a new transit centre at Kipling Station – to be served by MiWay, GO Transit and the TTC – will only add to demand on the route and the urgent case for a rapid transit option. Originally, the new station was planned to open last year, then in 2020, but is now set to open its doors next year.

Under the current setup, two bus routes provide local and express service respectively on Dundas, but neither is given priority. Instead, the express route stops in fewer places than its local sister-service. Without priority access, both are susceptible to congestion-related delays and traffic-related incidents.

In 2016, the City of Mississauga launched Dundas Connects, an investigation into possible rapid transit options for the east/west road. Two years later, the framework, featuring plans for complete streets, with a price tag between $422 and $502 million, was endorsed by councillors and the City began to hunt for funding.

At the end of 2019, Mississauga submitted a request for the project to the federal and provincial governments under the Investing in Canada Infrastructure Plan (ICIP). In total, councillors asked for $847.5 million for the Dundas BRT, a Lakeshore BRT, the replacement of outdated buses and a few other more minor projects. If the federal government accepts Mississauga’s application, the City would be responsible for 27 percent of the cost of the projects. 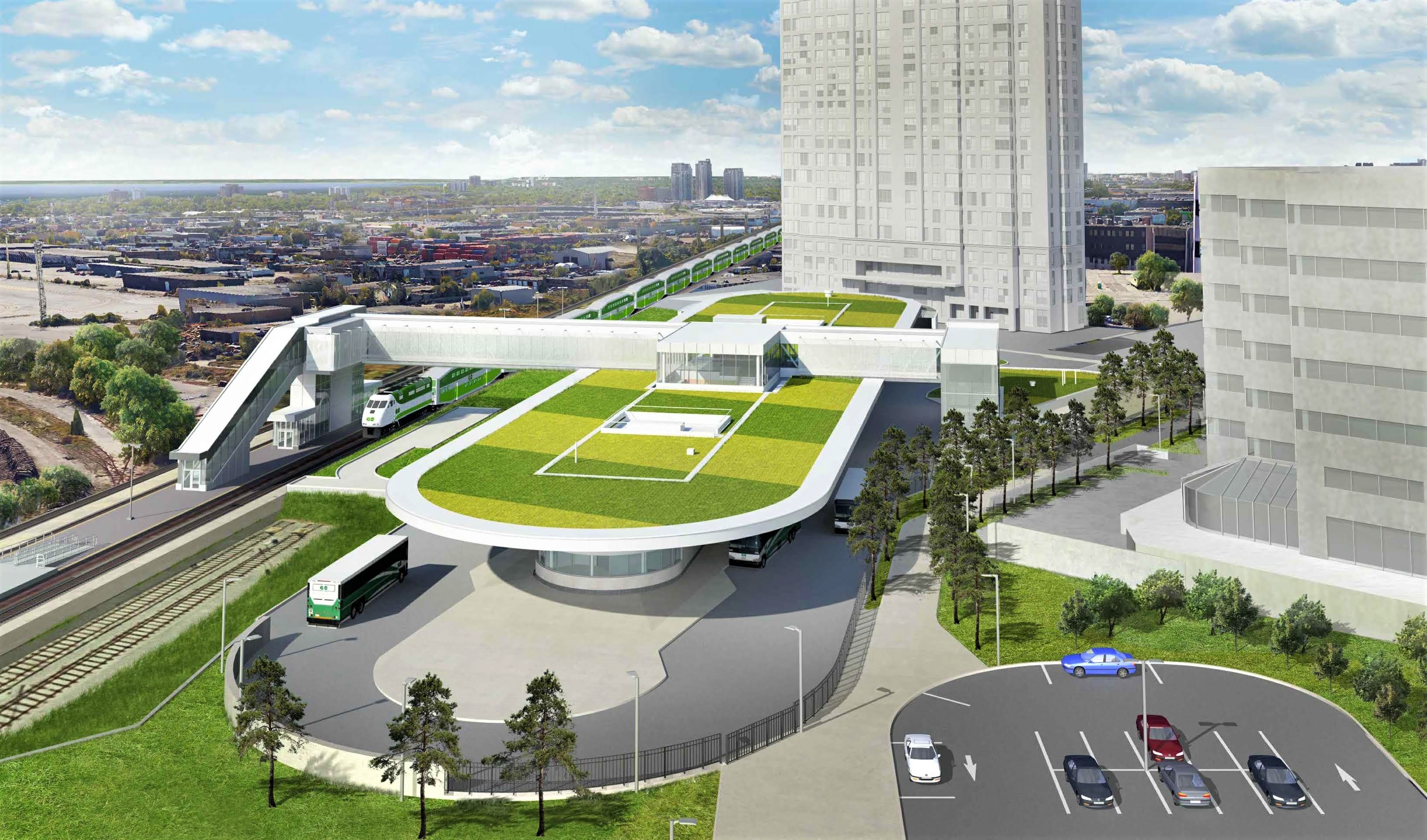 A rendering of the new Kipling Station set to open next year.

The deal with Metrolinx does not impact the ICIP application, instead it offers Mississauga a cost-saving on the work required before shovels enter the ground. Only planning work will take place with the provincial transit agency and construction will still be completed by the City with funding from all three levels of government.

“The City and Metrolinx share a mutual interest in advancing approvals for the Dundas BRT based upon our respective priorities,” staff wrote in a report approved by council. “While the overall work is to be undertaken based on the full Metrolinx corridor, the City will cost share the components and manage the study elements associated with the Mississauga segment to ensure they satisfy our ICIP application requirements and timelines of reaching substantial completion by March 31, 2027.”

Mississauga initially budgeted a total of $11 million for planning of the rapid transit corridor. The money was ear-marked for an Environmental Assessment (EA)/Transit Project Assessment Process (TPAP), which allows for critical investigative work that must take place before construction can begin on a route. The studies involve a variety of tests, including geological analysis and surveys of current traffic levels.

The cost-sharing agreement with Metrolinx could result in savings of as much as 50 percent, leaving the city to pay around $5.5 million instead of $11 million.

“The overall work is based on the full Metrolinx corridor,” Jerry Che, Manager Rapid Transit at the City, explained in a media release. “The next phase of work for the Dundas Bus Rapid Transit (BRT) corridor will be undertaken in cooperation with Metrolinx to complete the [TPAP] for the corridor and will include a public engagement plan that adheres to any municipal COVID-19 requirements. Public engagement for this phase of work is expected in late 2020 or early 2021… the procurement process is expected to be completed by the end of the summer.”

In the context of the COVID-19 pandemic, the move is a major saving.

In June, councillors received their first financial update of the 2021 budget year, with staff outlining a crushing reality. Preliminary recommendations from City Hall suggest suspending future investment in capital projects until a bailout from the provincial or federal governments is forthcoming, with even the provision of current services leading to a potential budget increase of more than 9 percent next year.

In March, at the beginning of the pandemic, the City was forced to stop charging fares for its buses and close recreation centres. These two areas provide significant revenue for the City to supplement property taxes (which account for 58 percent of Mississauga’s revenue) and losing them means the City is hurtling toward a major loss.

At a press conference last Wednesday, Mayor Bonnie Crombie reiterated her desire for a funding boost from other levels of government, saying her city’s COVID-19 losses could be at least $60 million by the end of the year.

Asked by The Pointer in April about a potential boost to federal infrastructure funding, Crombie reiterated the need for cash instead of investment in projects. “I’d like the government to focus on the needs list not the wants list,” she said. “We need operating revenue, we need to fund our day to day maintenance projects like road resurfacing, to help get our [recreation] centres, libraries [and] arenas back into operation. So that would be my priority.”

In order to shore up its finances and stave off some of the hardship of major service cuts, the City has laid off part-time staff, frozen new hires and reviewed its discretionary spending. The additional savings on the Dundas BRT project will be celebrated inside City Hall as they marginally reduce the load COVID-19 will put on the backs of Mississauga's taxpayers.

For residents across the Greater Toronto Hamilton Area, the decision is also a positive step. The move means Mississauga will collaborate with Metrolinx on a project that could see local buses and GO transit glide through Toronto, Mississauga, Oakville, Burlington and Hamilton.

An eventual BRT running from Hamilton to Toronto would encourage public transit use, with trip times at congestion plagued rush hour likely faster than driving. It would allow MiWay and the future Hurontario LRT to integrate more easily with the TTC and GO’s regional network.

A business case for the project was first completed by Metrolinx in 2010 and the project is listed in its 2041 priorities, alongside the Eglinton West LRT, Highway 7 West BRT extension and the Waterfront West LRT, all of which would benefit the Region of Peel.

Explaining the argument for bus corridors around the GTA in 2018, Metrolinx said they were one of the more versatile and cheaper rapid transit options. The agency explained the corridors could be converted at a later date to carry light rail, subway routes or even for the use of driverless autonomous shuttles.

The next stage for the project will be the confirmation of ICIP funding to deliver a BRT along Dundas in time for 2027.