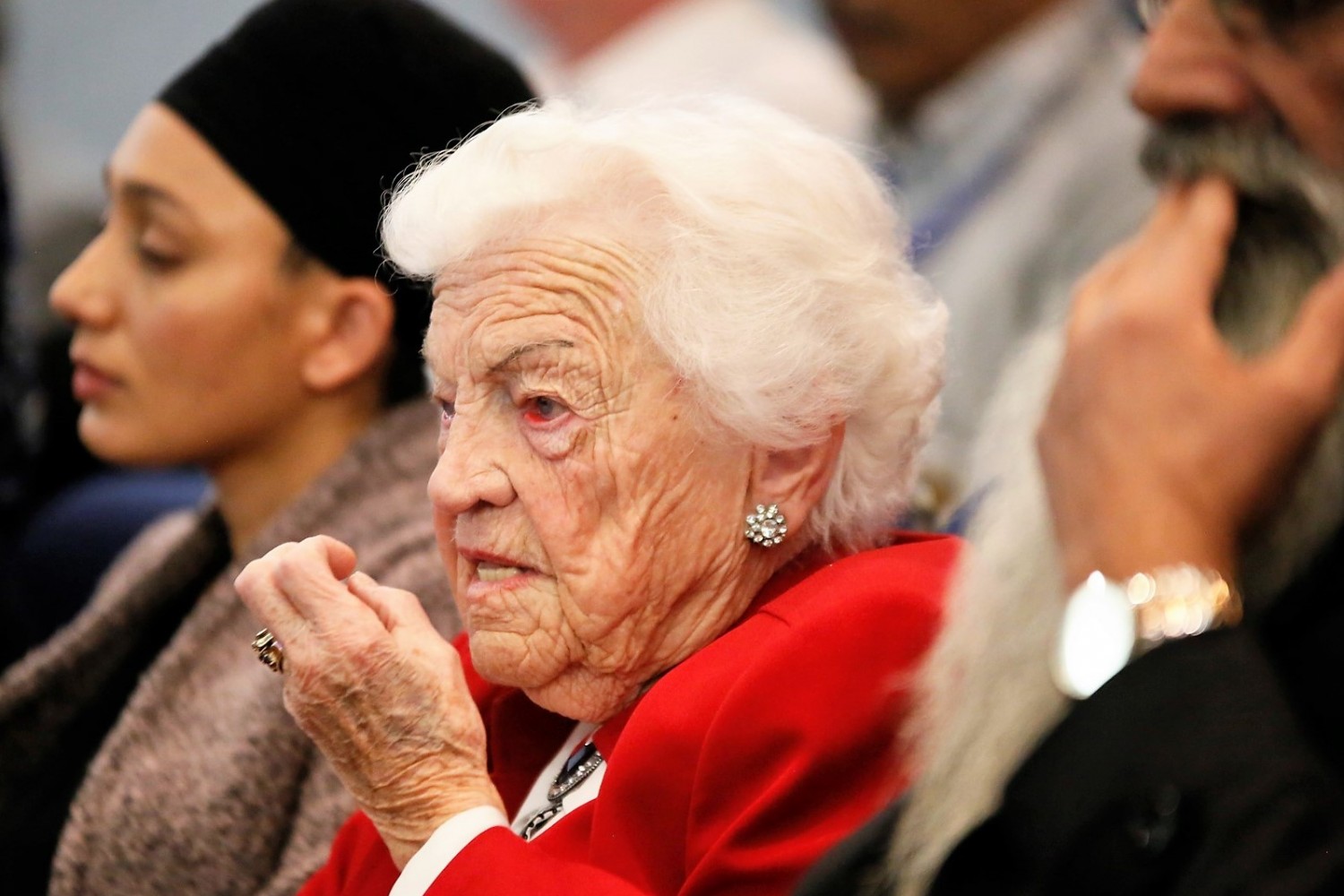 But that wasn’t how she was nicknamed ‘Hurricane’.

If you happened to cross her, she was all thunder and lightning. She could rain down invective that would make the boys down at the local legion blush. Her fury reached the Category 5 category.

She was the ‘Miss’ in Mississauga who won 12 straight elections by pluralities that would make Vladimir Putin green with envy. Her political and work/life philosophy was as blunt as a punch in the face: “Think like a man, act like a lady, and work like a dog.” All 5-foot-nothing of her took on the old boys' network and pounded it into submission. She ruled Mississauga with an iron fist for 36 years.

Her pre-politics work life ran straight through the Mad Men era that was ensnared by Don Draper types. In her later years, she slid comfortably into politics and again put the boots to the old boys’ hegemony.

After a debate in the 1978 campaign, then incumbent Mayor Ron Searle told a reporter at The Mississauga News that having a challenger who was a woman required him to pull his punches. “My instinct is to hammer the hell out of her,” he said, “but I can’t really do it. I’m really inhibited by the fact that she’s a woman.” When this quote appeared, his opponent lit up like a firecracker. But little did she or he know that this would lead to his undoing and her doing. She later told the Toronto Star: “It was so patronizing. And, believe me, I’m not the only woman who despises being patronized.”

McCallion’s win, pounding the bleep out of the man who couldn’t imagine doing the same to her, was followed by 11 more, and ended in 2014 with an electoral batting average of 1.000.

In our current age of #MeToo, gender equality and workplace inclusion, her work/life/political philosophy seems somewhat unmodern, but her biography, Hazel McCallion: A Life of Purpose, should be must-reading for any woman who wants to rise to her exalted status as the éminence grise of Canadian politics.

One of them is Sara Singh, MPP for Brampton Centre, and one of the two deputy leaders of the NDP party of Ontario, the official Opposition inside Queen’s Park, where such work has perhaps never been so important.

Singh is young (34), smart (working to complete her Ph.D. in Public Policy at Ryerson University), empathetic (former vice-president of Brampton Caledon Community Living), and is, in political parlance, a rising star. She is in many ways the true contemporary political counterbalance to the backward thinking, homogenous, anti-urban old-boys’ ‘50s-era ruling party that has plunged Ontario into the dark ages. Singh is the mirror opposite of Doug Ford.

She’s also scared, perhaps angry, and wondering what the hell she did to deserve run-ins with Bruce Marshall.

Yes, our calendar says 2019, but some men still cling desperately to their membership in the old boys’ club – much to our detriment, and Singh’s.

Last week, it came to light that Marshall, a former president of the federal Brampton Centre NDP riding association who helped get Singh elected to Queen’s Park in the 2018 election, was facing ongoing harassment allegations from her dating back to just months after they first met in October 2017.

The Ontario NDP is now considering legal action against Marshall.

What we know is this: In May 2018, Marshall was served notice by the Ontario NDP that a complaint had been filed against him under the party’s Anti-Harassment Policy, and an investigation eventually concluded that he had violated the policy.

The complaint included details of unwanted touching, repeated advances, inappropriate language toward her in person and via text, other inappropriate behaviour, and intimidating behavior. He was warned to stop interacting with her.

In February of last year, Marshall was asked to leave as a volunteer on the Singh campaign.

This week, Marshall provided a letter to The Pointer signed by Singh suggesting that she objected to his actions as late as February of this year. Lucy Watson, Ontario NDP Provincial Director told The Pointer, "Mr. Marshall repeatedly crossed the line in his pursuit of Ms. Singh.”

It appears, according to Watson’s observation of his recent public protestation, Marshall is still trying to harass Singh through the media.

Marshall is a divorced former Vaughan firefighter and a CHUM-FM host who took photographs, made campaign videos and attended strategic planning meetings during Singh’s run for office.

In the candidate’s original complaint, she quickly became uncomfortable with his behavior and the use of pet names and phrases. He repeatedly asked her to dinner, and she declined.

Singh’s creeping discomfort continued unabated, fueled by Marshall’s words and actions. She said she felt intimidated by him. He countered that many of the so-called “touching” incidents occurred in the winter when Singh appeared to be uncomfortable in the cold.

Four days before Singh sent a cease and desist letter in May, Marshall sent an angry, seven-page email, laden with insults and expletives to Watson, and said he was quitting the NDP. One comment given over to The Pointer is of interest: “I QUIT because older white males have a target on their backs at the ONDP ... I will not be any longer bullied by you sanctimonious a-holes.”

The Don Draper era, was captured in all its idiocy and ugliness – and truth – in the award-winning Mad Men TV series. It captured the frat-boy ethos where women were treated like ornaments in the workplace, and most were stymied in their attempt to climb into the higher levels of corporate culture when a certain type of white male ruled like the T-Rex (rex meaning “king” in Latin), before an extinction event wiped away millions of years of predatory evolution.

But hundreds of thousands of years of human ascendency only brought us to the civilized world of western culture.

Its blatant sexism manifested itself throughout history, rearing its head in every single realm of the exclusive and ultimately privileged. Even a sport such as golf – which has always operated by a set of distinguishing rules that has elevated the game’s status into an unparalleled place of honour among the rich and educated – betrays its ugliest truth, when it comes to women. The Honourable Company of Edinburgh Golfers (Muirfield) in Gullane, Scotland, a bastion of the sport’s history and pride, sported a sign near the clubhouse that read: No Dogs or Women Allowed!

That exclusionary practice lasted a tidy 273 years until it ran head-long into the 21st century. Muirfield was dumped from hosting The Open Championship until it recently changed its evil ways and added 20 women members. But it did so out of financial expediency.

Facing no such money issue, Augusta National Golf Club, the most revered and exclusive order in the sport’s American landscape, where the Masters Tournament is played every April, only agreed, under mounting international pressure, to admit women members in 2012. Think about that. Think about all the institutions that openly, willfully, mockingly carried on Augusta’s discrimination and blatant sexism, viewing women as inferior and not worthy of membership into their privileged white man’s world: The TV network, CBS, that broadcasts the annual event; America’s two political parties, whose politicians regularly played the course; every major corporation whose executives enjoyed membership; and the actual Augusta club itself, which still refuses to publicly disclose its list of paying members.

None of them raised any serious concern about the refusal to allow women, for almost 80 years.

It was part of the unspoken code.

The Code of Conduct portrayed on Mad Men had a boatload of other emissaries including the current president of the United States. Before winning office as the most powerful leader in the world, he was lording over women. When the Access Hollywood tape was released during the 2016 campaign, it showed how he felt about and treated women and where he liked to grab them, like some sort of big-game hunter who sets upon his helpless prey then mounts and displays his conquest for all his guffawing  buddies back at the private club to see. Twenty-one women have stepped forward charging Trump with inappropriate sexual misconduct, including the latest who said he actually committed rape. None of this has dimmed Trump’s standing in the eyes of his core followers, including evangelicals and thuggish politicians who claim the morality of religion as their guiding light. Even his support from white women remains strong. The view that women should know their place in society is unfortunately also still shared by many in certain ethnic communities, and for a certain generation of boomer-aged white men (which Marshall fits into nicely), that is a prevailing attitude.

When does good-natured banter morph into harassment, and touching become abuse?

By the end of Hazel McCallion’s business and political careers, she had a work ethic that would exhaust a Navy Seal, and a hide as thick as a rhino’s. Her shoot-from-the-hip style rubbed the old boys’ network the wrong way – but she couldn’t have cared less. Her ascendency as an icon in the women’s movement, wasn’t calculated, it just happened. She insists she wasn’t a forerunner to the #MeToo movement, but the “How-to” one. She showed women how to succeed against the odds and the ugly forces of male chauvinism, and the downright display of entitled male aggression.

Singh has worked as hard as anyone to achieve her status as a rising talent in Ontario’s political arena. She has also overcome discrimination as the first Indo-Caribbean-Canadian elected to Queen’s Park. She remains focused about what she wants to achieve in her career – building a society that’s fairer for all. There are many admirable qualities about her that shine through when discussing the issues that continue to dog us – poverty, housing shortages, plummeting healthcare. Her diverse and family-oriented life was captured recently in a feature story in The Pointer.

Still, as a woman she has had to face the tiresome task of fending off what her male counterparts don’t have to fend off – unwanted advances from the opposite sex.

What is normal behavior and what goes too far is what the Singh-Marshall situation is all about. Marshall has made clear his position. Like the members of all the old boys’ clubs of the past, he thinks the harassment complaints against him are much ado about nothing. He is firmly rooted in the world of those who think it’s perfectly fine to keep asking a woman out, even if she says “NO” a thousand times. And when someone like Singh stands up to the centuries of culture that created Marshall’s entitled belief that he has every right to possess her (and thus gets to keep trying until she gives up), he cries that “older white males have a target on their backs.”

The NDP isn’t relenting, it intends to protect one of its own.

It’s disheartening to think other women must continue to do battle in this rearguard action. Male politicians are allowed to focus on their work. Singh’s time is just as important. And in true McCallion fashion, she has stood up strongly for herself.

Let’s hope she soon gets back to a place where Marshall, or any other man who thinks like him, can’t prevent her from doing what she does best – serving the needs of the voters who put her into office.