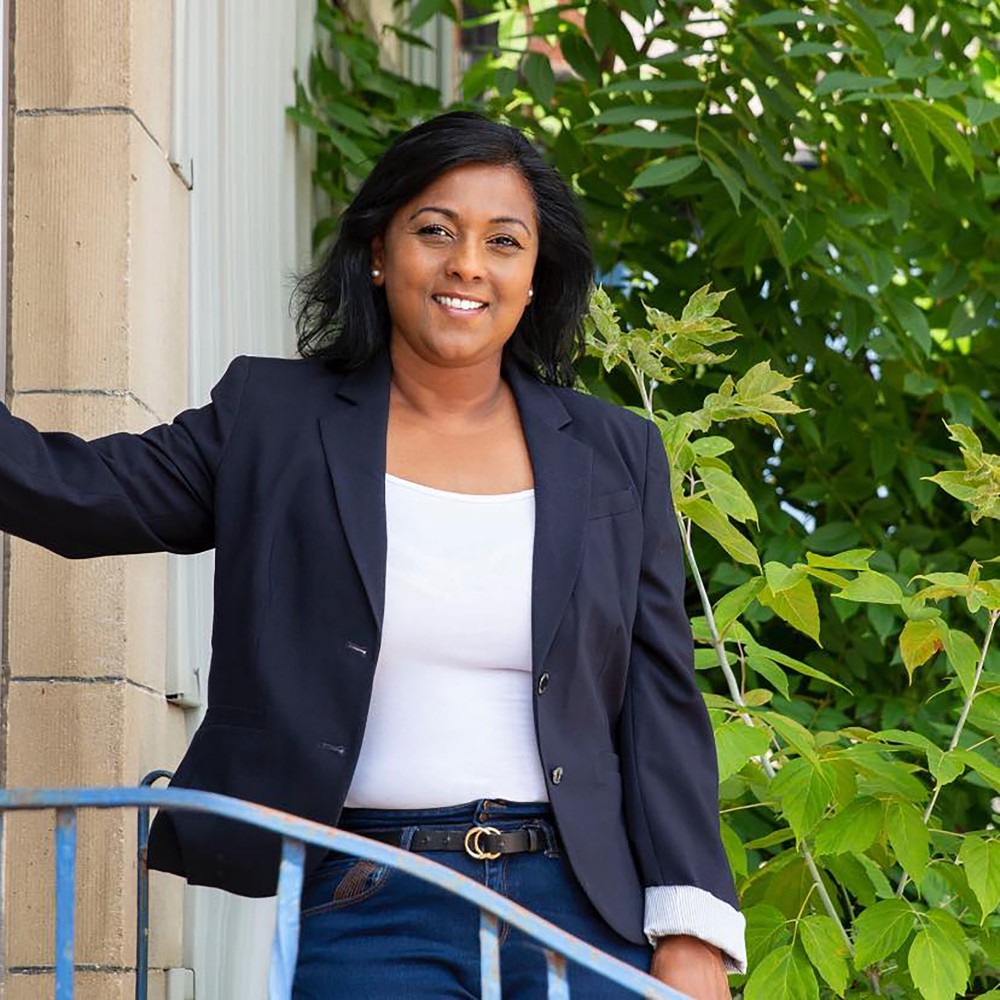 Annette Groves, new mayor of Caledon, promises to move the Town in new direction; will protect its natural beauty

Annette Groves is the new mayor of Caledon after receiving the support of just over 10,000 residents, beating out Jennifer Innis by 3,000 votes.

“I feel overwhelmed. I’m thrilled. I’m happy. I’m grateful,” Groves told The Pointer after her win. “I’m grateful to all these people who helped me.”

Groves thanked all those who worked tirelessly on her campaign, as well as her friends and family. Over 100 people came to show their support at her election night party Monday.

The suspenseful mood quickly turned into a celebration shortly after 9 p.m. when Groves received a call from her competitor Innis congratulating her on her win.

“This is only the beginning. We have so much work to do. We have tons and tons of work to do to clean things up in Caledon,” Groves said.

Her victory represents a break in the developer-driven planning and influence of the aggregate industry that has seen the Town’s vast expanses of agricultural and green spaces gobbled up by private interests over the last two decades. She said her win represents a promise for new policies in Caledon.

Groves, who first joined council in 2000, was unsuccessful in her first run for mayor in 2010. But after rejoining council in 2014 she was often the only voice pushing back against the powerful development industry. 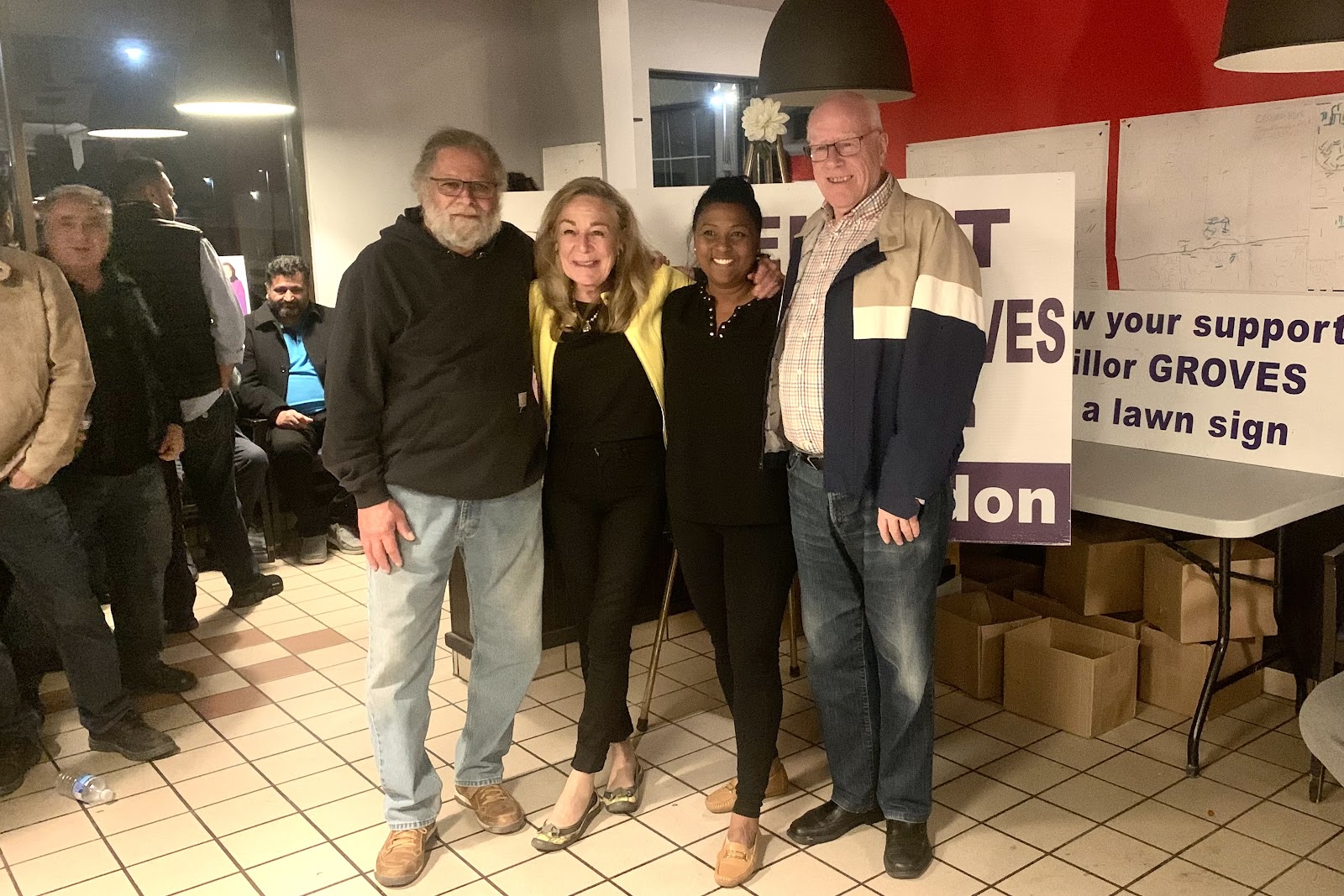 Annette Groves (second from right) at her election night party in Bolton.

In her almost 20 years on council, Groves was never a part of the group that dominated Town Hall. She was a representative of the community living in Bolton who was never afraid to ask the hard questions and stand up for what she truly believed in, according to supporters who came out to celebrate.

Her commitment to preserve the Town’s character and natural features was highlighted.

Caledon is a largely rural area of Peel and includes the southern part of the protected Greenbelt. In April, the Region of Peel voted to approve its Official Plan to 2051 which included expanding the urban boundary by nearly 11,000 acres, much of which covers prime farmland in southern Caledon.

The fear is this will create suburban sprawl and car dominated communities, the kind of growth that was so popular across much of the GTA over the past six decades.

“We really need to stop with the sprawl because sprawl is not a way to develop,” Groves told The Pointer in September. “If we're going to develop, we need to develop smartly.”

Groves pointed to the example of Southfields which is a community located along Kennedy Road between Old School Road and Mayfield Road. She said many residents are unhappy with the way the community was developed because there are subdivisions but no amenities. This means most residents are travelling to Brampton to get the things they need. Groves wants to build complete communities near existing infrastructure that contain the necessary services, public institutions and commercial features to support growth while keeping money within the local Caledon economy.

A longtime resident of Bolton, Groves has tried to keep the number of trucks in her community to a minimum, despite the policies pushed by her council colleagues, including Innis. In early 2020, Groves accused outgoing mayor Allan Thompson of making a request to the province to expand employment lands in Bolton in order to build a freight village. The warehouses and logistics operations have dramatically increased the number of trucks on the road, increasing air pollution and other environmental impacts.

Groves garnered much support throughout her campaign for her promise to get trucks off the road.

She wants to see Highway 50 less congested and widened, and Highway 427 needs to be expanded to help with that.

Unlike Innis, Thompson and most others on council, Groves has opposed the 413 Highway. While environmental reports showed the devastation the highway will cause (according to Environmental Defence, an additional 17 million tonnes of greenhouse gas emissions will be released into the atmosphere by 2050 if the highway is built) Caledon is one of the only municipalities along the proposed highway route that has not passed a motion in opposition.

In February, Groves brought forward a motion to oppose the construction of the 413. Her effort was voted down by Innis, Thompson and Nick de Boer. Groves’ main supporter was Councillor Ian Sinclair. He did not seek re-election.

At a Planning and Development Meeting on February 15, Councillor (and soon to be Mayor) Annette Groves along with Ian Sinclair were the only two who voted against the 413 Highway.

Despite reprenting Ward 5 in Bolton, Groves has not shied away from issues that are important to other parts of Caledon or the Town as a whole. At a meeting held by the Forks of the Credit Preservation Group October 12, Groves stood vehemently opposed to the St. Mary’s Blasting Quarry.

At the same meeting, Innis promised that if elected she would create an aggregate task force to work on issues related to the controversial aggregate industry. However, when a vote was brought forward in 2016 for a working group to address aggregate matters, Innis voted against it. The only current member of Caledon council who voted in support was Groves.

Groves recently retabled the idea of an aggregate task force but was told by Thompson to save the request for the new council. Residents can be assured that Groves will not back down from her opposition toward the aggregate industry.

“We do have a responsibility to protect those people in the area that are living nearby these pits and this potential quarry,” Groves said at the recent meeting.

The purpose of the special council meeting was to discuss and vote on an interim control bylaw that would prevent new aggregate proposals for up to one year. The meeting, which was called through Thompson by Ward 1 area councillor Lynn Kiernan and Innis, was seen as a last minute desperate grab for votes after Innis previously took votes in support of the industry. Groves on the other hand, has been the most vocal council member opposed to the use of prime land in Caledon to extract raw materials for use in the construction industry. She has repeatedly called for the preservation of Caledon’s greenspaces and has repeatedly been outvoted.

Another issue Groves says she will call attention to as mayor is bringing the skilled trades and other jobs of the future to Caledon, to create well-paying employment opportunities and attract high-return industries. She also said she wants to bring all members of the community together with a common purpose.

“I’m looking forward to moving Caledon ahead,” Groves said. “Taking it in the right direction with the help of the people by my side.”