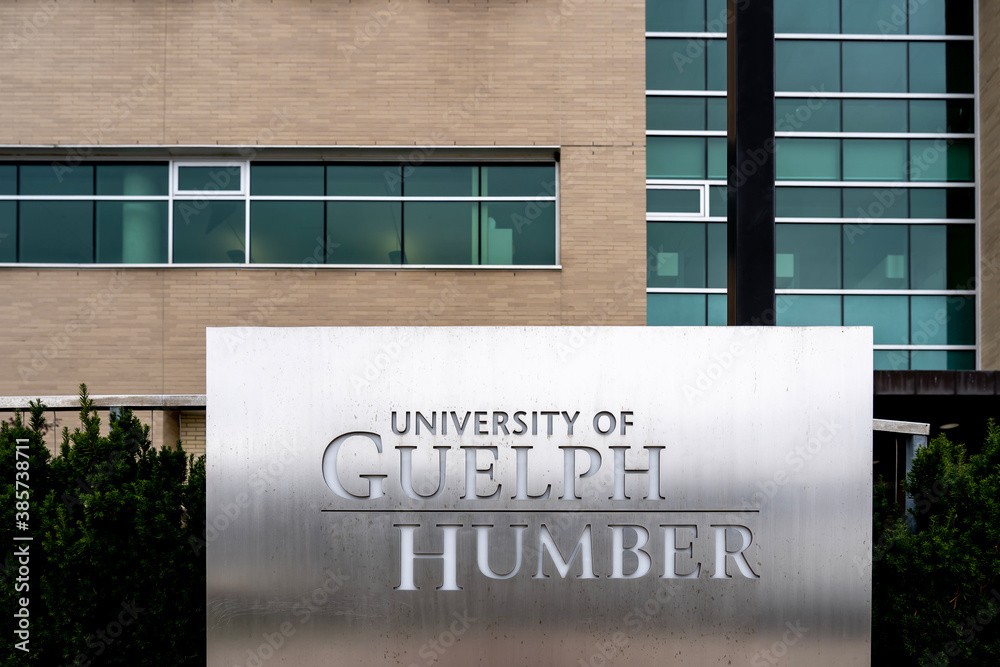 Another blow to Patrick Brown’s leadership: Guelph-Humber pulls out of Brampton’s university plan

The University of Guelph and Humber College have scrapped plans to create a campus in Brampton’s planned Centre for Innovation, citing a “significant concern” around space constraints and inaction around the project, raising more questions about Patrick Brown’s leadership.

The shocking news also puts the future of the innovation centre project in doubt, with no anchor tenant to fill the proposed space.

The University partnership was set to be the anchor tenant for the Centre For Innovation (CFI), which has been advertised as “an iconic gateway building that will offer a new central library, collaborative space for postsecondary institutions and office space.” The planned centre at 14 and 21 Nelson Street would also be a commuter hub for students and other train passengers entering or departing the city via the Brampton Downtown GO station.

“In recent months, attempts to find additional space to deliver the high-quality student experience of a comprehensive university that meet the standards of Guelph-Humber and its parent institutions have been unsuccessful. Additionally, the timing of the construction of the planned CFI has yet to be confirmed,” the University of Guelph-Humber announced in a public statement yesterday, October 6.

“This uncertainty creates a challenge when building a robust student recruitment plan. Timing is critical for us, as we are entering a new recruitment cycle. Current students, and those who are considering attending the university in the fall, as well as employees, must have certainty about where they will study and work in the coming years.”

But Brown’s refusal to expand the City budget following his election in late 2018 put a number of large capital projects in doubt. He immediately removed more than $200 million from the capital program, stalling plans on a number of approved projects.

By the time the 2022 budget was approved, the City had allocated $99.4 million for the CFI project but the delays led to new cost estimates of around $172 million. In the 2022 budget the City allocated another $20 million, but pushed back the build to 2024 in order to avoid budgeting for immediate costs as Brown refused to increase the overall City budget.

In a letter to the City of Brampton on Thursday, Charlotte Yates, President & Vice-Chancellor of University of Guelph, and Ann Marie Vaughan, President and CEO of Humber College, referenced raising their concerns about delays to Council in March.

Still unresolved, the university partners said that timing would be critical for them and they “no longer see the CFI as a timely or viable option for the relocation of Guelph-Humber.”

“This uncertainty around the construction of core academic, foundational space calls into question the feasibility of a move within the timelines originally discussed.”

The plan has been advertised on the campaign literature for incumbents Brown, Santos and Vicente, claiming they would be “re-locating 5,200 University of Guelph-Humber students to Brampton.”

Their efforts to play up the plan came right after all three voted to cancel a forensic investigation into the failed BramptonU project. Evidence from City staff and a third-party investigator revealed the extent of interference by Brown and Santos in the botched idea. Almost $630,000 was spent on firms with direct ties to the two, and evidence showed Santos worked to help her friend get one of the consultant contracts while Brown’s close friend was the point person for work that was either never done, handed in 18 months late or fell far short of what was required.

Their ill-conceived idea to launch an independent university was questioned from the beginning, as critics pointed out the consultants had no experience launching a university, the timelines claimed by Brown, Santos and Vicente for opening the university made little sense and the poorly planned vision did not align with plans to partner with Guelph-Humber.

After news spread that Brown and Santos were at the centre of the investigation into the handing out of almost $630,000 for the failed plan, and they then killed the investigation called in May by a majority of councillors, they, along with Vicente started sending out material claiming the mishandled BramptonU project helped pave the way for the Guelph-Humber plan. There was no connection between the two and now the two post-secondary partners have pulled out.

Humber College has told The Pointer it was not aware of its logo and name appearing on campaign material sent by Brown, Santos and Vicente. The material is featured along with the website “vidlink.ca/university” which leads to Patrick Brown’s campaign website.

“As a publicly assisted institution, the University of Guelph-Humber is impartial during all election periods, and we were not aware of the flyer as we are not involved with the creation of campaign materials,” Andrew Leopold, director of marketing and communications, told The Pointer on Friday. 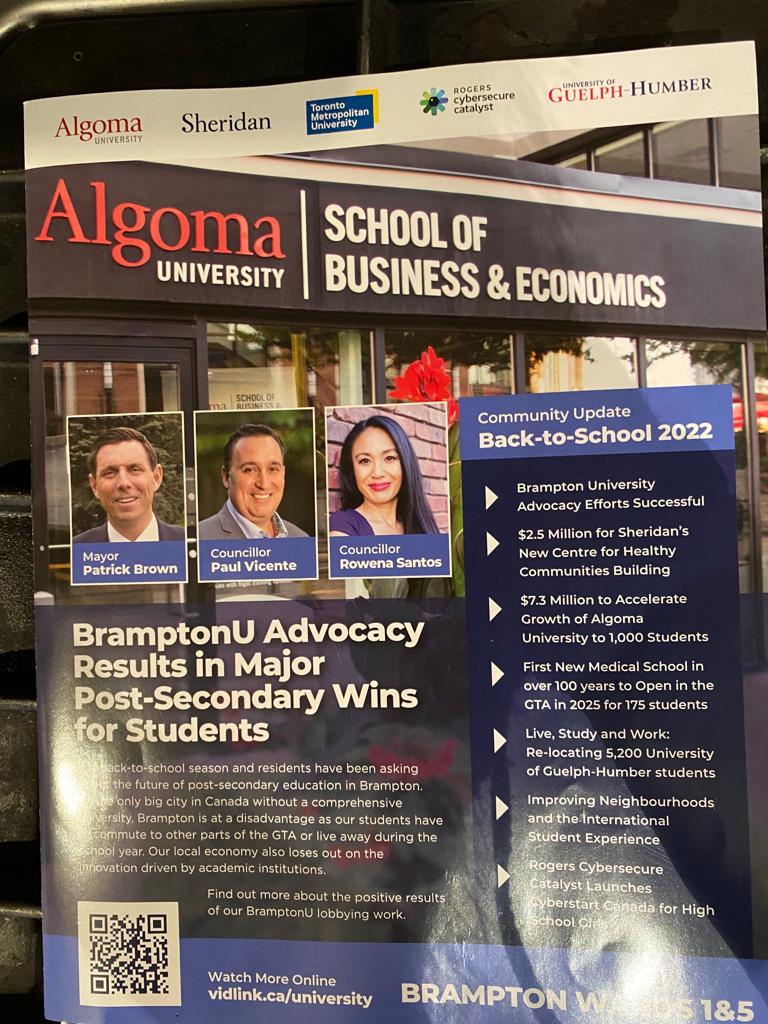 Campaign materials for Patrick Brown, Paul Vicente and Rowena Santos with the University of Guelph-Humber logo and name, which Humber College denies giving permission to use.

“The dysfunction and chaos of Patrick Brown’s tenure, his focus on his leadership race and all the fallout, got in the way of the city's business and Guelph and Humber have now bailed. This is yet another example of Brown’s mismanagement and another lost opportunity for Bramptonians. It’s time for change at City Hall”.

Brown’s office was asked for a statement but didn’t respond.

Brown, Santos and Vicente also continue to claim a medical school will be built in the city by 2025. The PC government has not brought forward any legislation about the future construction of a medical school in Brampton and no money to build a medical school has been put into the provincial budget ($1 million was approved to explore the idea).

Despite needing a teaching hospital (which Brampton does not have) and up to two decades to show a medical school can be supported by a university that has never had one before, Brown, Santos, Vicente and Harkirat Singh (one of their council allies) continue to claim the medical school is a done deal.

In a statement Friday, the City of Brampton said it will continue to work on expanding post-secondary opportunities.

“The Centre for Innovation (CFI) is a key piece of infrastructure to support Brampton's goal of driving investment to the downtown core through innovation and education.”

With no anchor tenant, a botched BramptonU plan and Brown’s refusal to invest the needed money, voters might have to rescue the city’s post-secondary future on October 24.