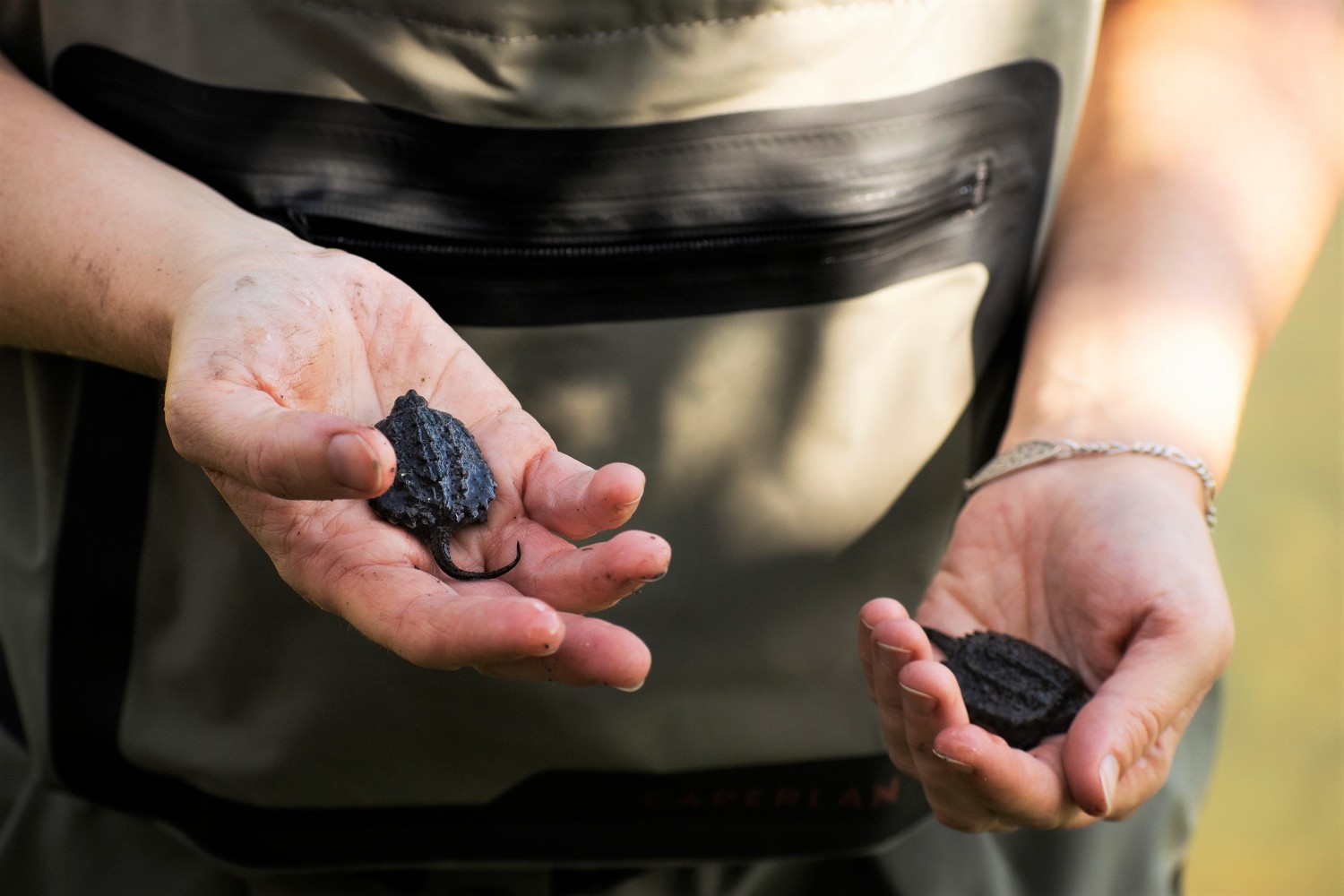 The critically sensitive ecosystem we are all a part of has countless features that are all interdependent; if even one is affected, the entire system has the potential to collapse. Scientists have warned of what happens when one species goes extinct – human factors being the most prominent recent cause – and what this means for life as we know it. Thanks to rescue operations many species have been rehabilitated which helps maintain their population, but because of constant threats like habitat loss due to urban development, a multitude of species – at risk or not – are still in rapid decline.

Every being has a role to play in the ecosystem, from the Earth worms travelling underground dramatically improving the health of soil, rabbits surviving on vegetation within greenspaces that would otherwise overgrow and make the environment less habitable, foxes feeding on creatures that left unchecked would destroy entire greenspaces, to turtles and racoons “cleaning up” after everyone around them.

A lot of destruction comes along with us. And with our population increasing at an unsustainable rate, we are destroying more and more vital ecosystems.

The biggest threat all animals face is habitat loss, and some of the main contributing factors are linked to development and climate change. Today, less than 30 percent of Ontario’s original wetlands remain. Hot roads and sidewalks, sprawling subdivisions, enormous warehouses, to name just a few of the features of our built form,  encroach into and fragment wild spaces, resulting in an alarming rate of preventable animal loss.

In 2016, after hundreds of hours and multiple phases throughout years of study, Brampton’s first wildlife culvert was installed along with eco fencing in a provincially significant wetland to direct animals toward the passage. The use and benefits were then studied with trail cameras, and two more culverts have since been added.

Despite these crucial efforts 21 turtles of breeding age were hit by vehicles so far this year on Heart Lake Road between Sandalwood Parkway and Countryside Drive. 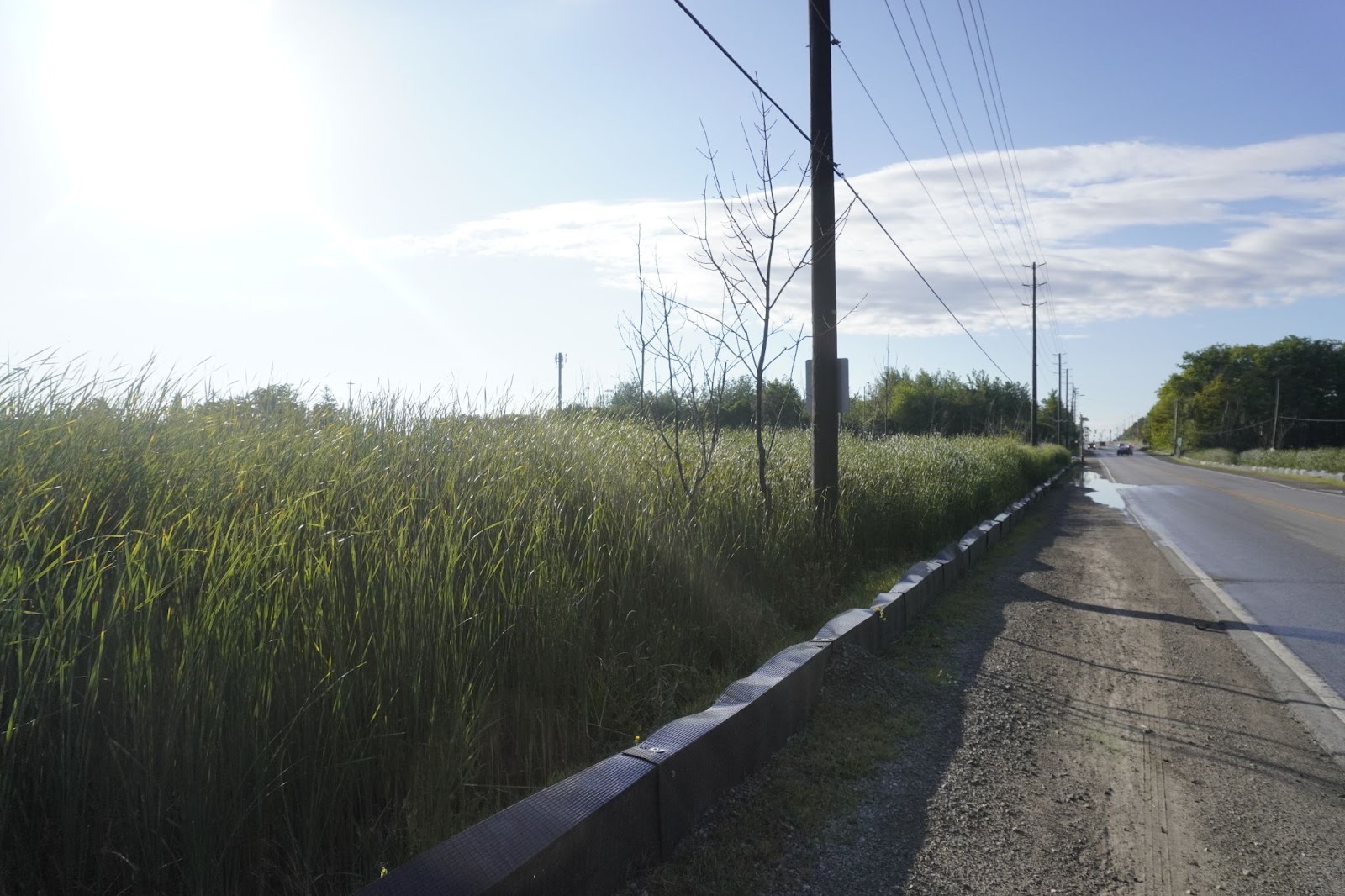 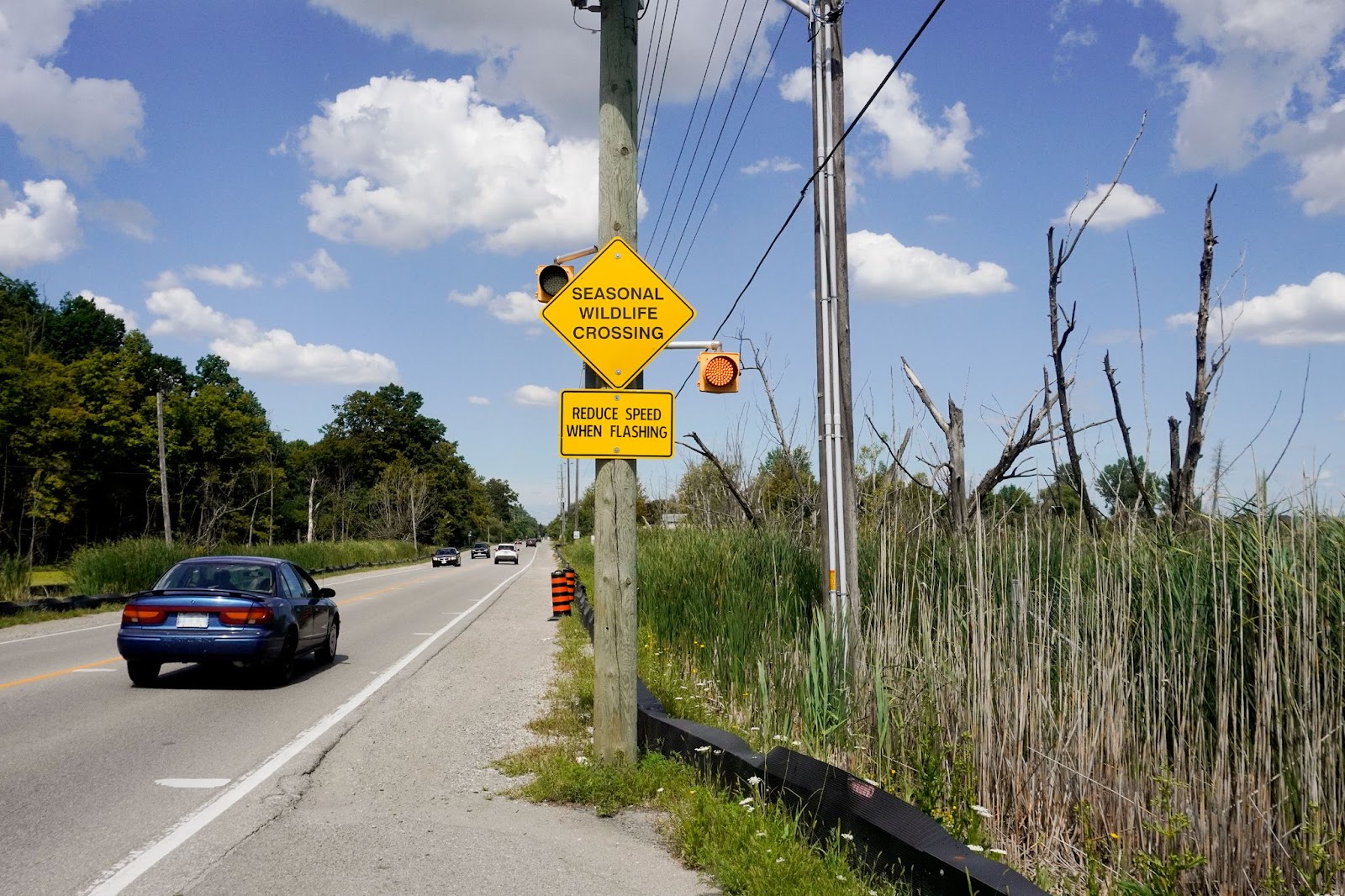 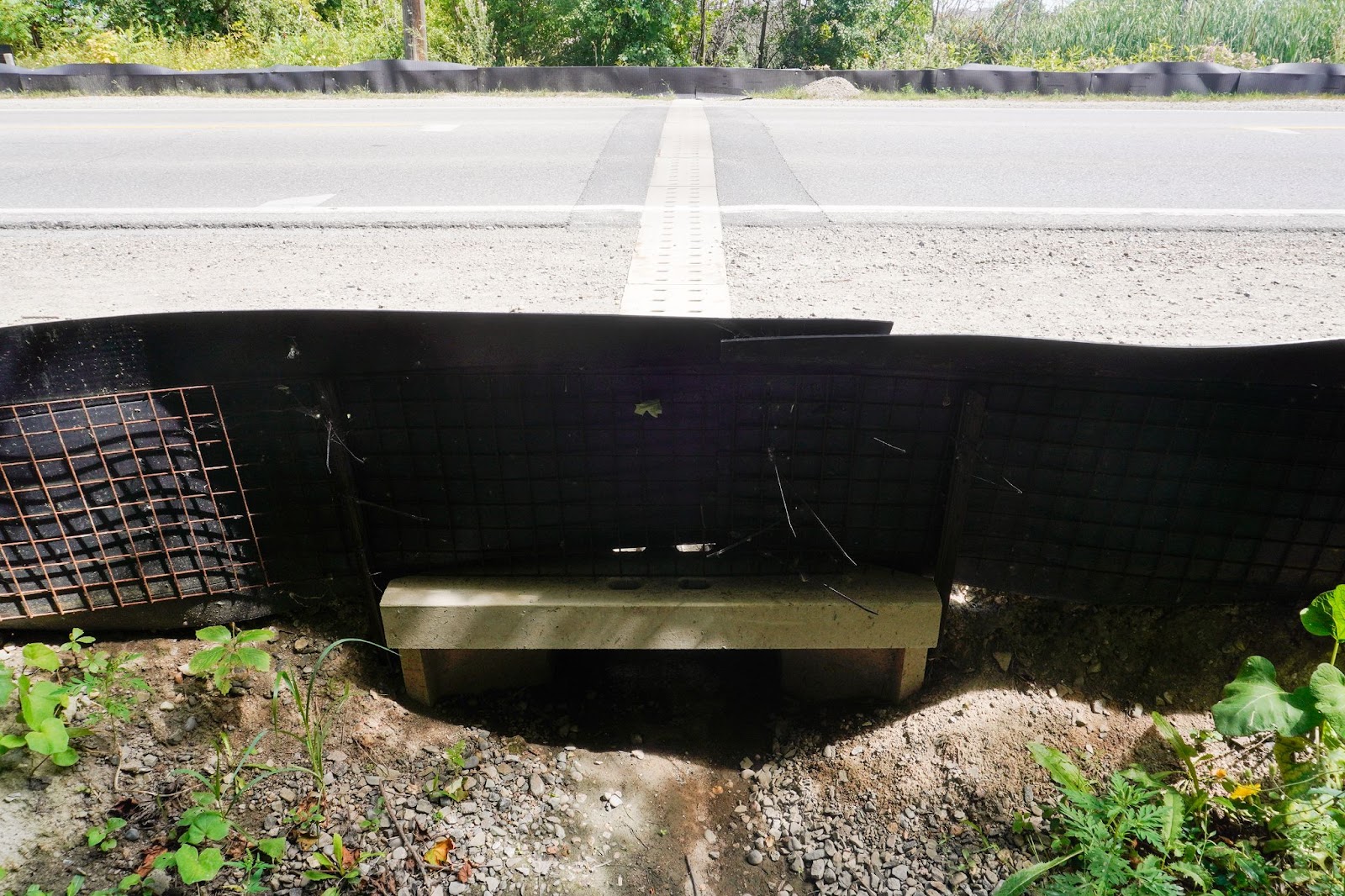 Eco fencing and a Wildlife Culvert along Heart Lake Road just north of Sandalwood. The fencing is meant to last long term, yet it is not permanent. It is also being damaged when not just snow but the gravel underneath is ploughed every year in the winter. The current solution is to fill in the displaced gravel in the spring which leaves breaks in the fencing.

That’s why Heart Lake Turtle Troopers (HLTT) was formed. Two years ago, concerned residents – Christina Cicconetti and Lori Leckie – met by chance while taking a walk along Loafer’s Lake in Brampton. Both started out with little knowledge yet wanting to get involved, they decided to make a Facebook group to see if others would be interested in turtle conservation, and along with their co-founders Jamie-Lee Ball, Maureen Mueller, Rebecca Zimmerman Bambrough, Leah Nacua, and Ruth Takayesu, HLTT now has almost 1,000 active members.

“Hundreds upon hundreds of turtles were dying every year in order to make this happen, so many that it dropped the population way down. Less turtles have been hit recently, partly because of the fencing, but partly because the population has decreased significantly so quickly,” Cicconetti says. “The reality is that we have to release over one thousand hatchlings to replace one breeding aged turtle.” 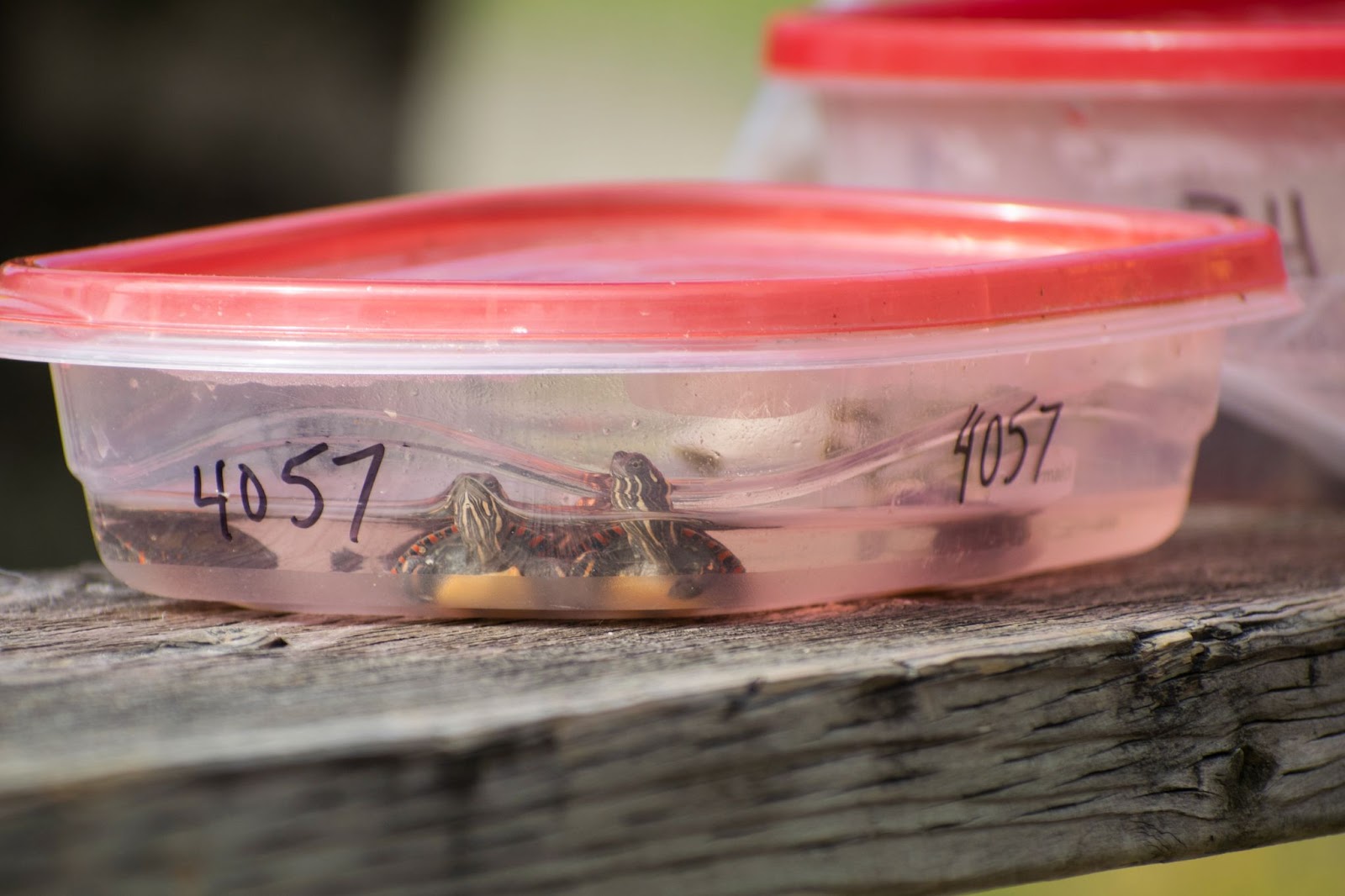 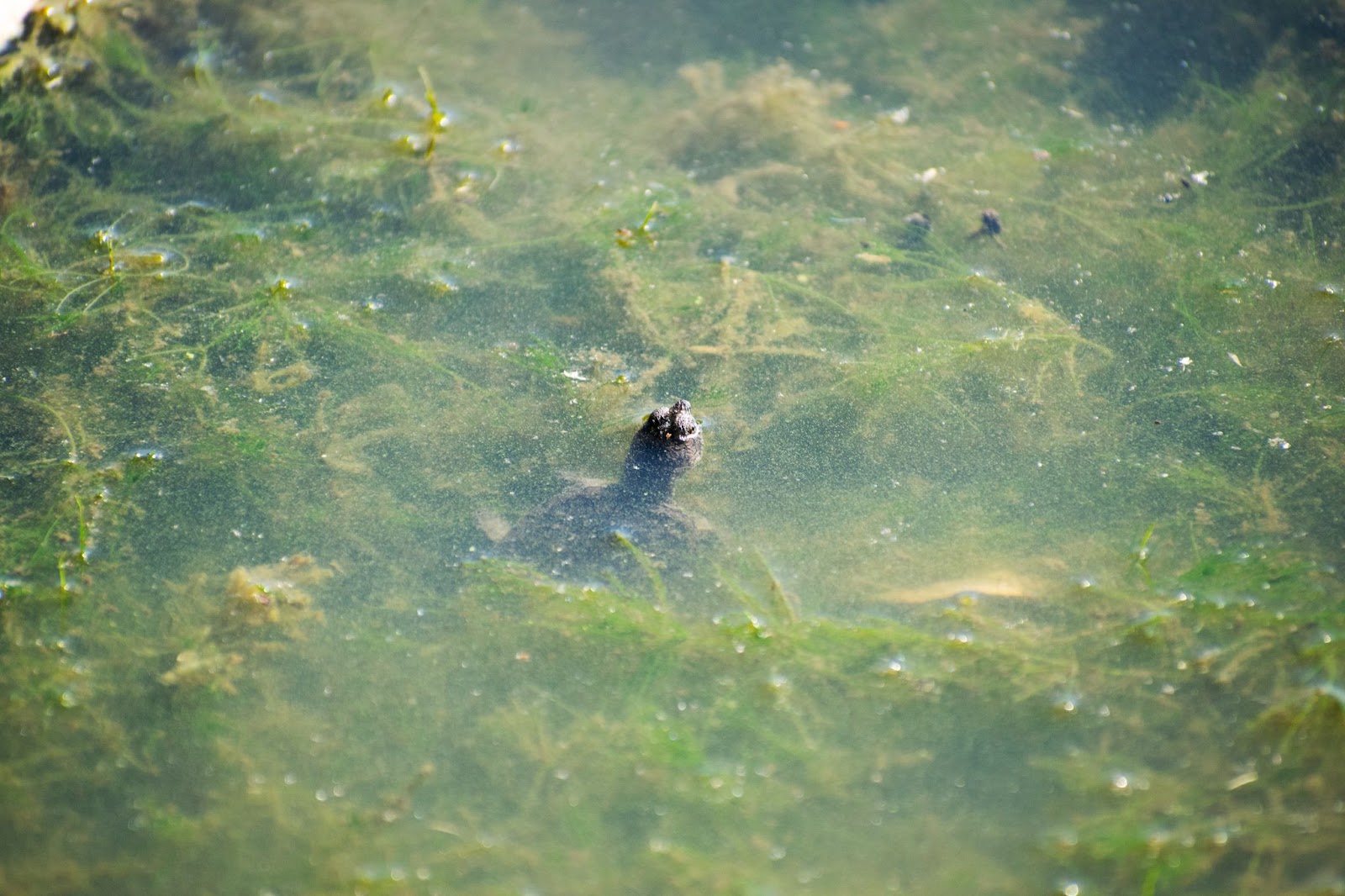 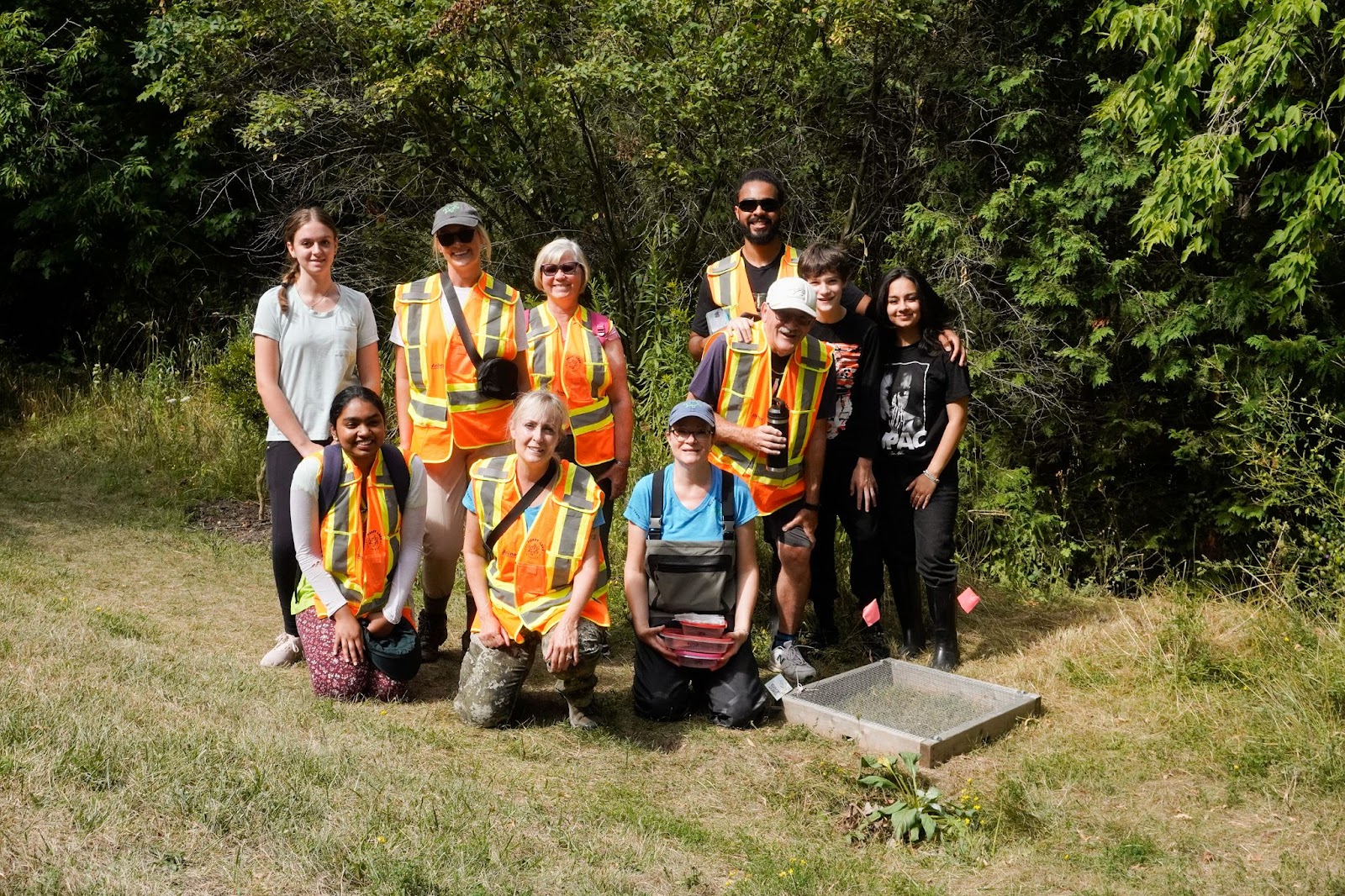 Painted Turtle Hatchlings in a temporary transport container marked with their clutch (group of eggs or hatchlings) are numbered to keep records; a released snapping turtle hatchling surfaces for some air before exploring more during his return home; the HLTT Group.

Freshwater turtles are the living and breathing filters of wetlands. Munching on a wide range of food these opportunistic eaters are the scavengers of the waters. Without the biodiversity of a variety of species of turtles, wetlands become overrun with mosquitoes, dead fish, and invasive plants, rendering them completely uninhabitable. Lack of fresh water then creates a chain reaction of devastation events that are capable of collapsing the ecosystem around it.

Painted turtles can live an average of 30 years in the wild when populations are healthy. However, as of 2018 these turtles have been designated as a species of Special Concern – meaning they along with seven other turtle species in Ontario are at risk of disappearing. Reaching maturity slowly – on average 5 and 12 years for males and females respectively – and laying small clutches of eggs makes the death of even one breeding turtle devastating to the entire population.

“A car at Countryside Drive made a left onto Heartlake Road and was either going too fast or cut someone off and went off the road right into our turtle nesting beach. The turtle nesting beach is still filled with car parts that we keep finding. Luckily there were no turtles nesting at the time. We’re noticing a lot more people are in a rush or just acting careless,” Cicconetti says.

“The eco fencing is a huge win and we are actually very lucky to have it because there are a lot of cities that don’t have any at all. The city does maintain it, they keep the brush trimmed a metre in so the animals have access to the passage on both sides. It’s not great the way they do it because I saw them with their trimmers during nesting season, so improvements can be made there, but I think that’s where our group comes in – hopefully we can work with everyone and continue to educate on how best to protect turtles beyond the fencing and nest boxes.” 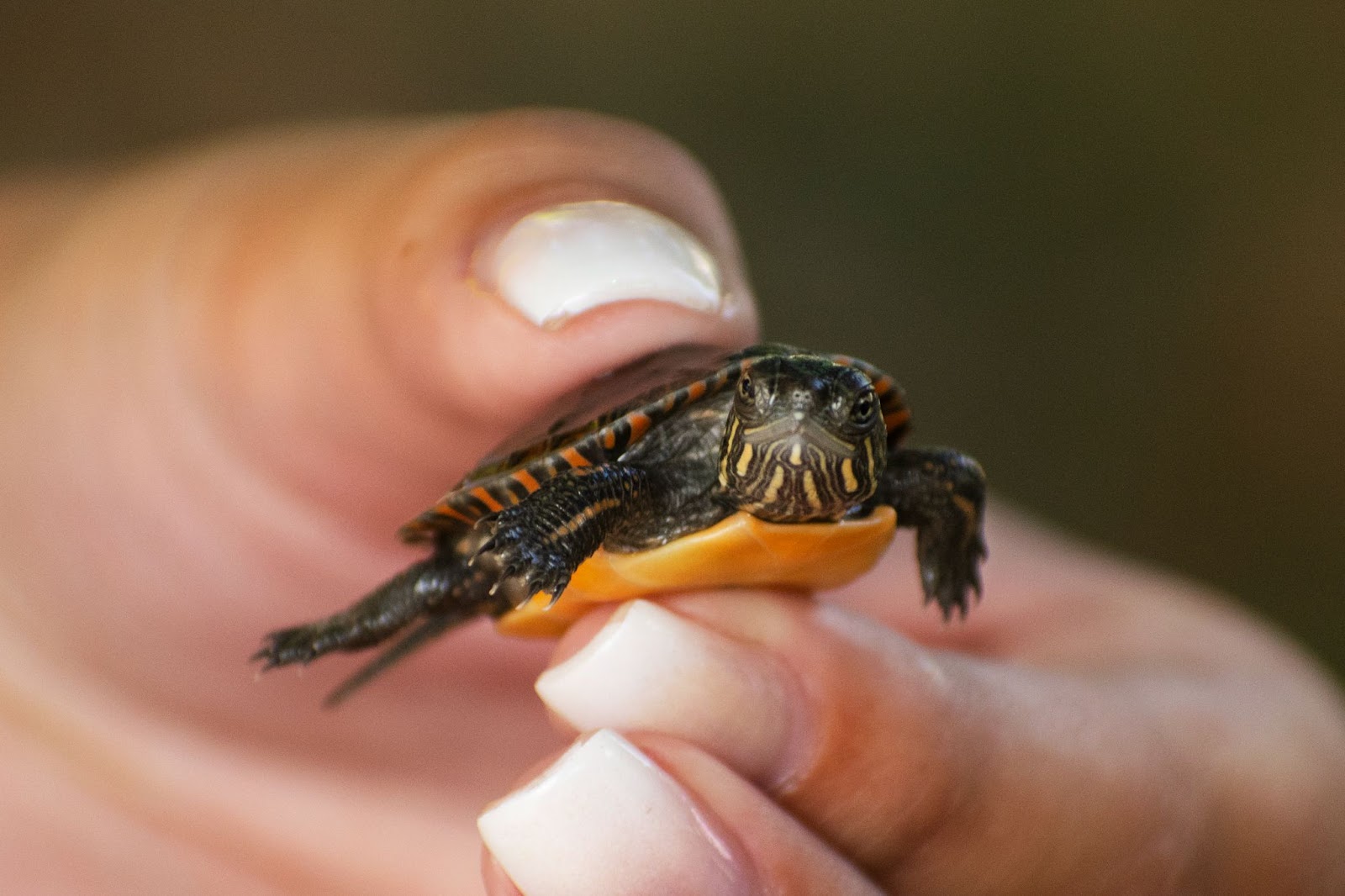 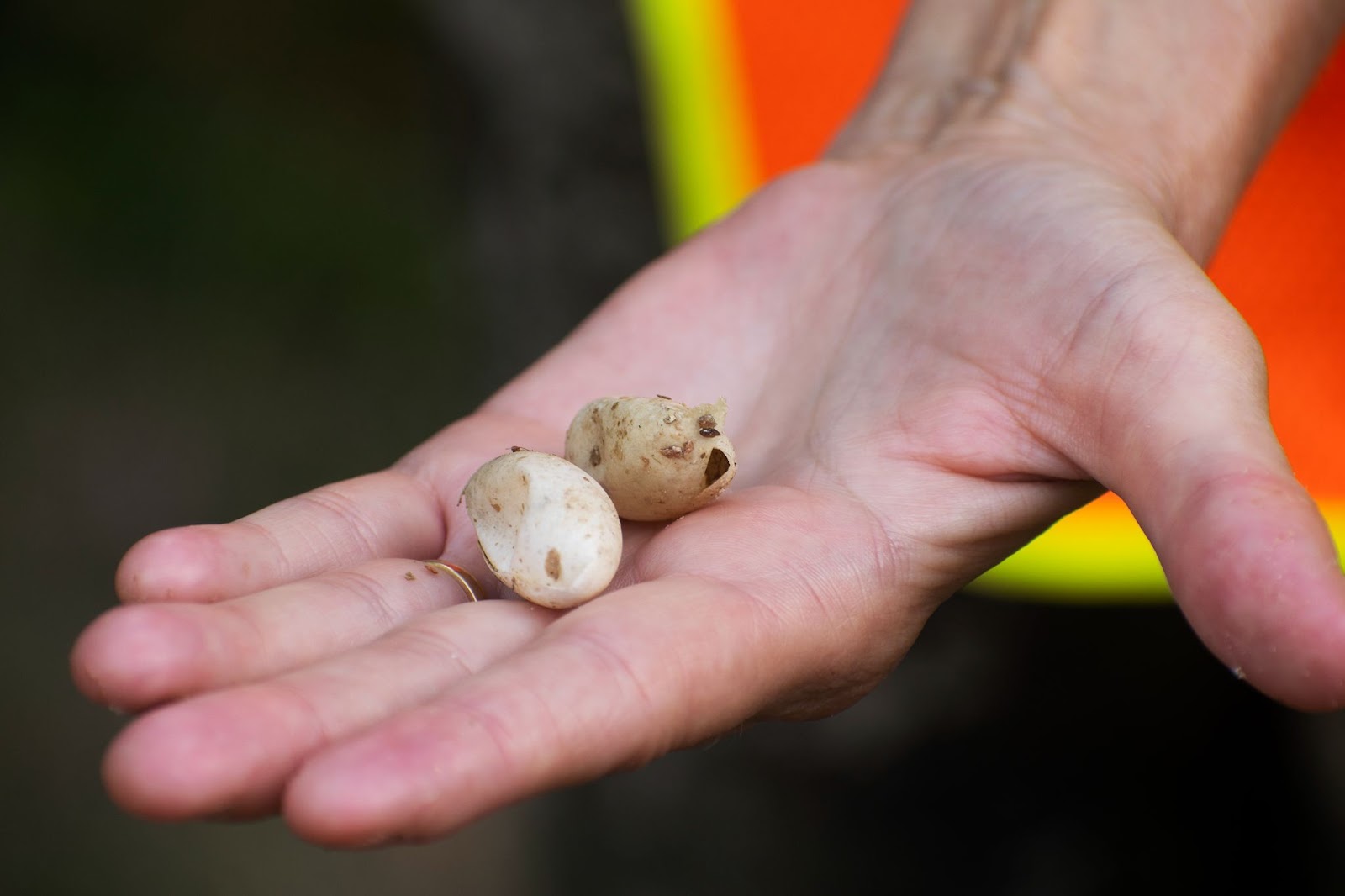 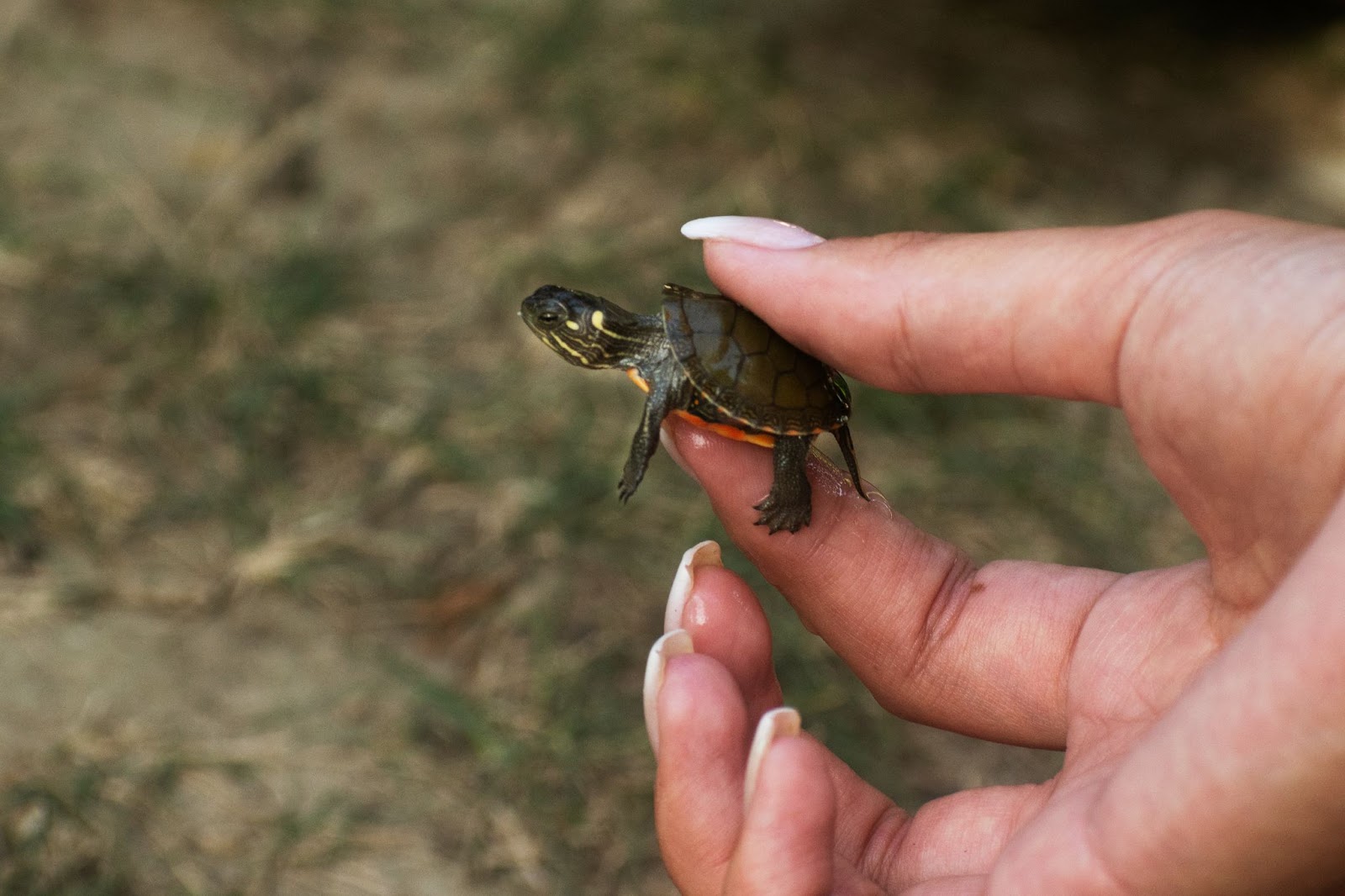 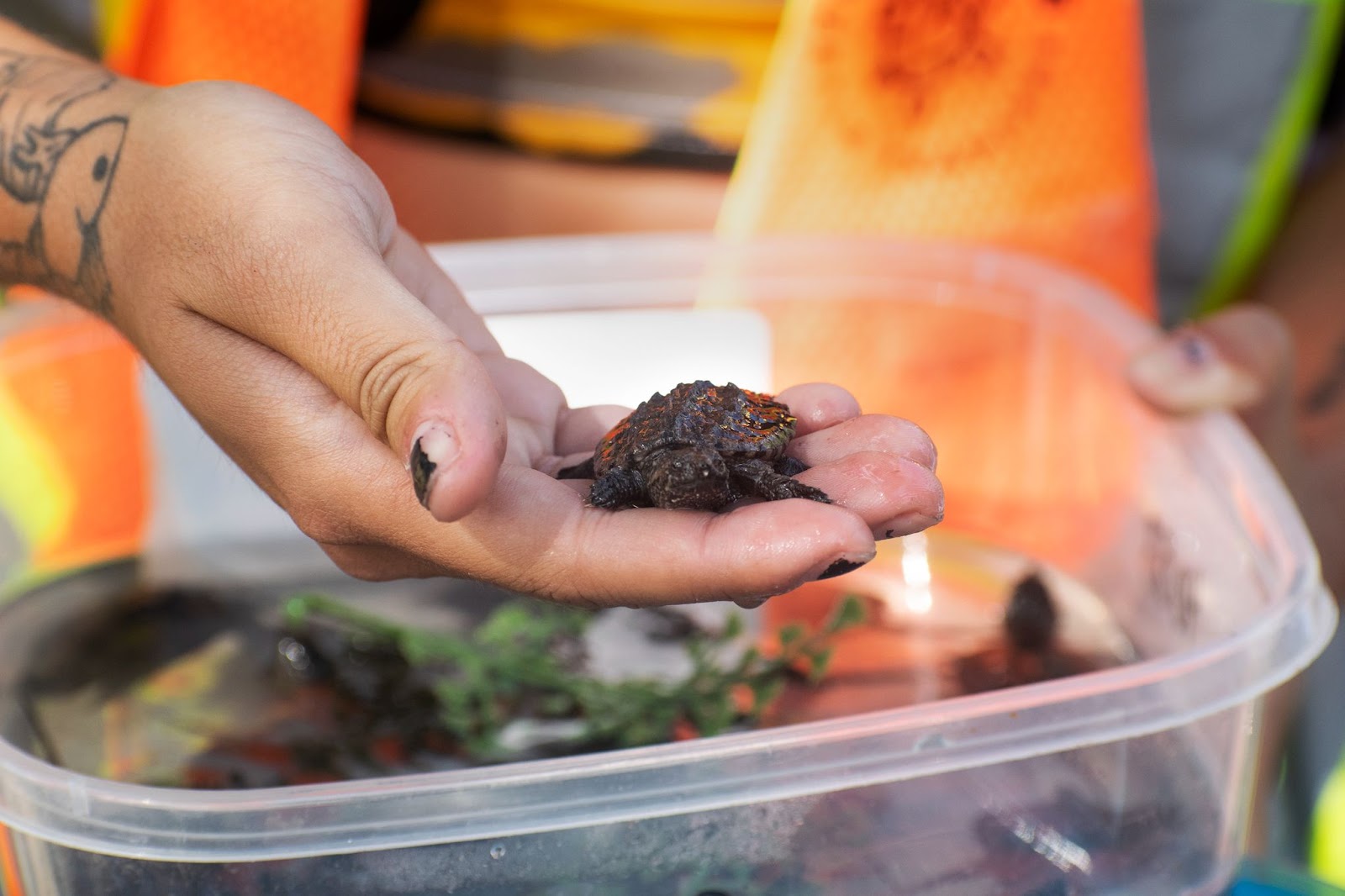 Painted Turtles are on average the size of a loonie when they are born. Adults will grow until sexual maturity and can be up to 25 cm long. Snappers, on the other hand, are much bigger. Starting out just wider than a golf ball, adults can reach up to 50 cm long, though this is becoming more and more rare due to their low reproductive and increasingly high mortality rate.
(Alexis Wright/The Pointer)

Snapping Turtles take even longer, sometimes reaching 15 to 20 years before maturation. All species prefer the gravel-sand substrate that shoulders of roads are made up of and is a big part of why there is such a high risk to breeding-age turtles specifically, yet all face the threat of habitat degradation through processes like fragmentation, when, for example, the construction of major highway corridors cuts through crucial ecosystems.

Since the development of Brampton’s 410 Highway, which has had severe consequences on the provincially significant wetland where the Heartlake Conservation Area is located, the local turtle population has suffered greatly as traffic volumes have exploded.

Mostly due to their millions of years of evolution, even minute-old babies have natural instincts to travel toward water and seek shelter immediately.

“Keya, our grandmother turtle here, was hit in June. She breached the eco fencing – she’s massive, she’s a dinosaur,” Cicconetti says. “She’s at least 80. I don’t know if she climbed right over it or what, but I think what she wanted was to cross over to the east side of the road to lay her eggs in the sun and someone drove right over her and hit her. The side of her face was damaged and part of her shell.”

“Luckily one of our Troopers drove by at just the right time and saw her bleeding on the side of the road, calls me and says come quick. Then he calls me back five minutes later and says she’s laying her eggs. She got hit by a car, laid 50 eggs in the ground, covered them perfectly, and started to boogie her way back to the wetland. So we grabbed her. We had to get a specialised bin to put her in because she is so massive. She went to the Ontario Turtle Conservation Centre (OTCC). They said she jumped out of the bin and started ‘running’ down the sidewalk. But her babies hatched and they’re actually being released today.” 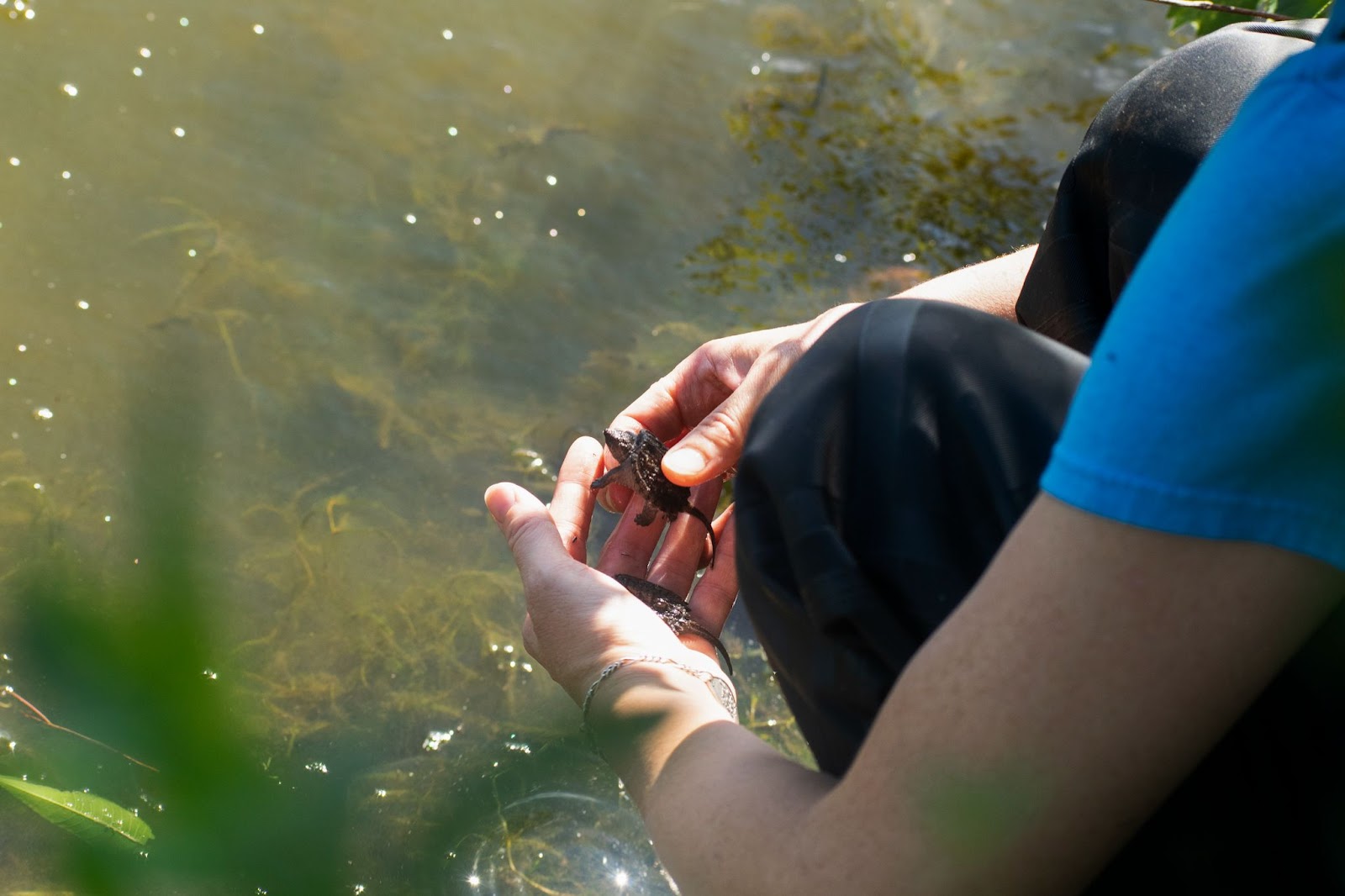 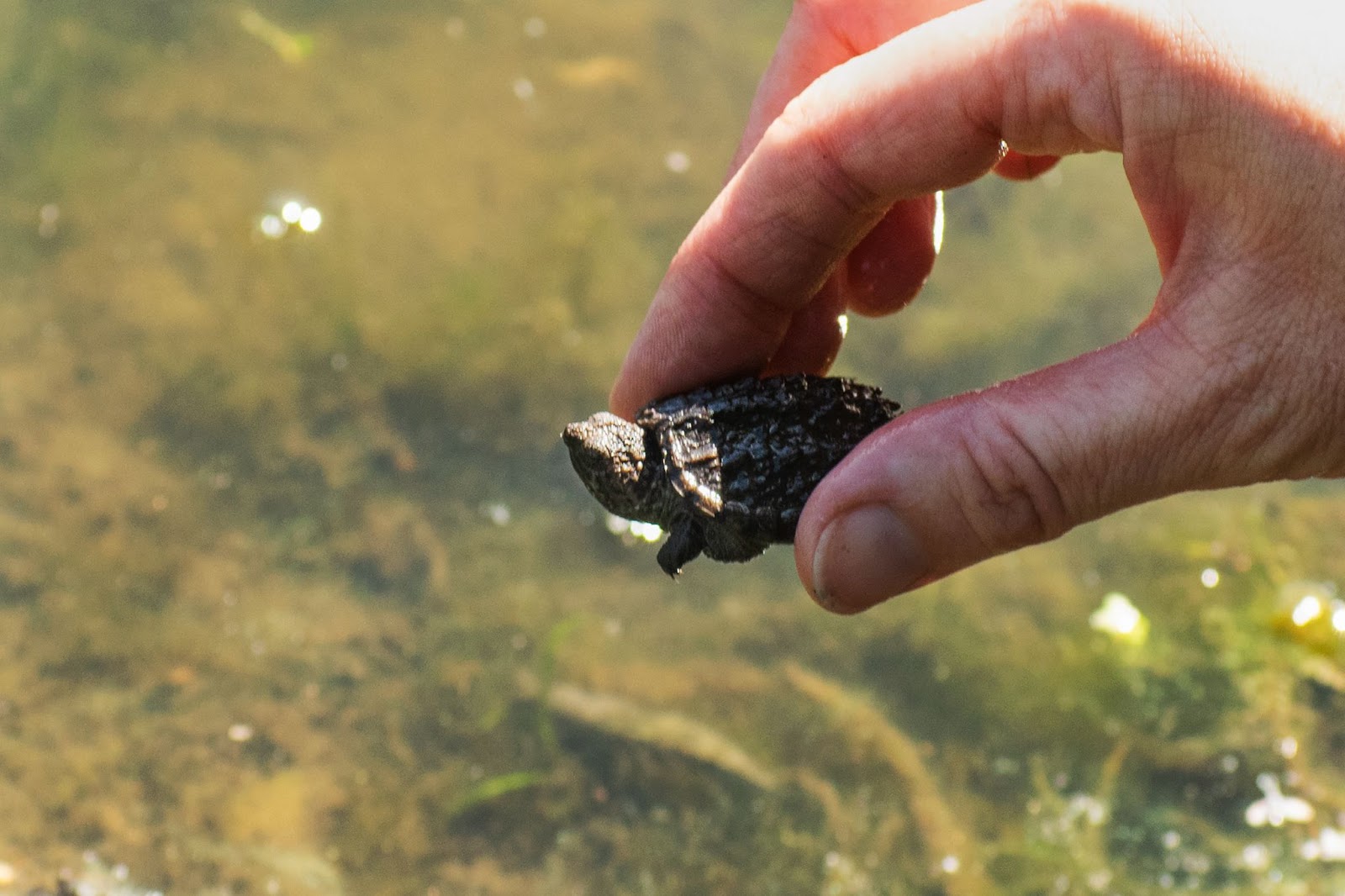 Outdoor education, especially for children, is one of the best ways to create relationships between humans and their natural surroundings.

Releasing many hatchlings at once requires patience and knowledge of wetland ecosystems. All turtles must be spread out along shorelines to decrease their chances of being eaten by predators. Naturally when freshwater hatchlings are born they tend to come out of their shells one by one which gives them a better chance to hide, so when controlled releases happen the Turtle Troopers try to emulate that natural protection.

Another type of development that can threaten breeding-age turtles is park expansions. As of June 2022, the Ministry of Natural Resources and Forestry Ontario (MNR) approved permits for HLTT to excavate nests from a baseball diamond that is in use by residents. A win-win situation allowing children to play outside safely at the same time being able to provide the ideal environment for the eggs to incubate away from predators.

Because of these permits, along with the Saving Turtles At Risk Today (START) program and partnership with Scales Nature Park and OTCC, as of August 14th over 80 snapping and painted turtle hatchlings have been released back into the habitats they were initially found in this year – with many more nesting boxes throughout the area nearing the end of the process too. The difference in timing between indoor and outdoor nest incubation is the varying weather elements. Indoors, temperature and moisture can be controlled, outdoors it cannot. 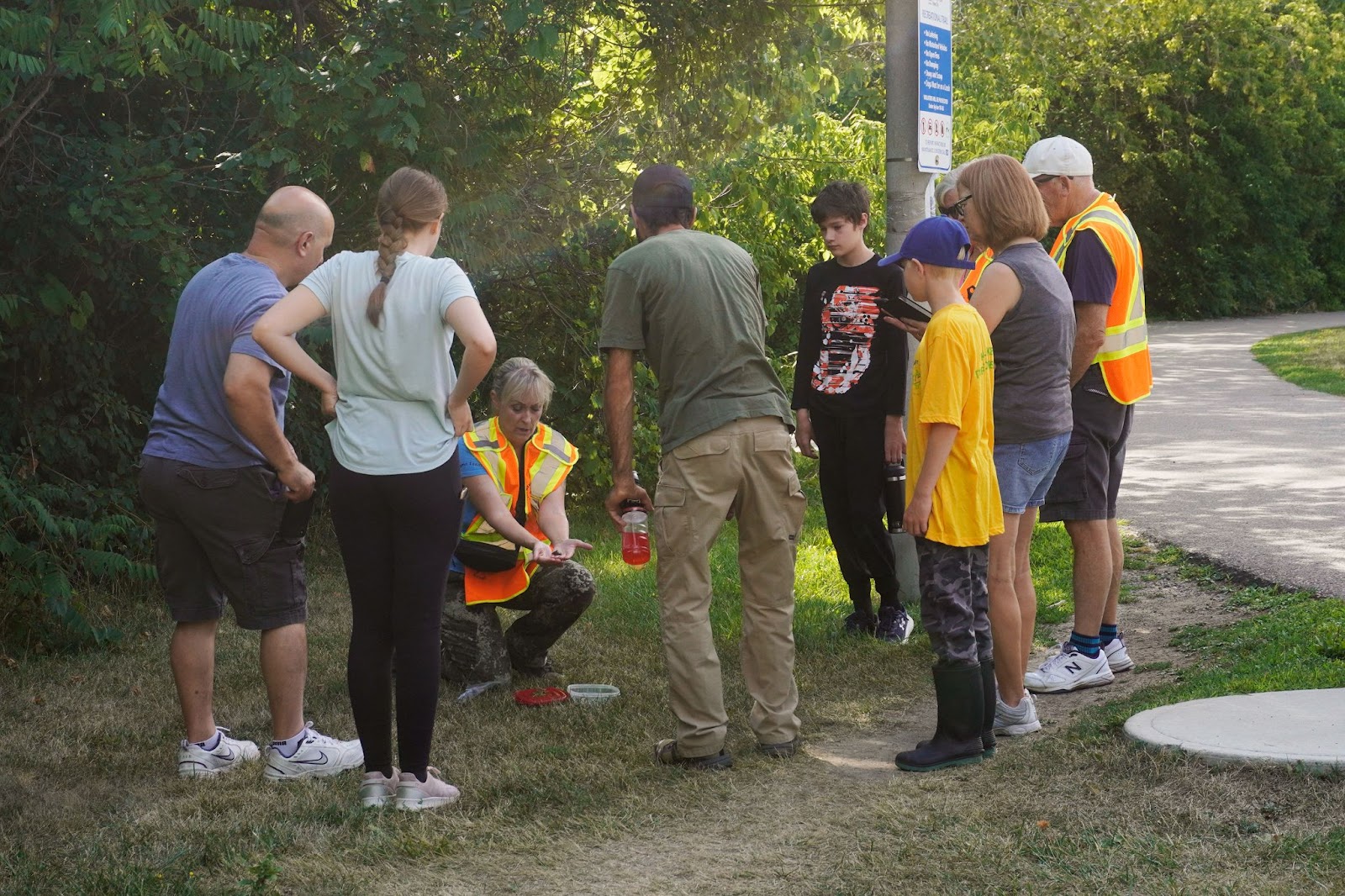 Lori Leckie (kneeling) holding a hatchling education talk with a breakoff group about turtles’ roles in the ecosystem. 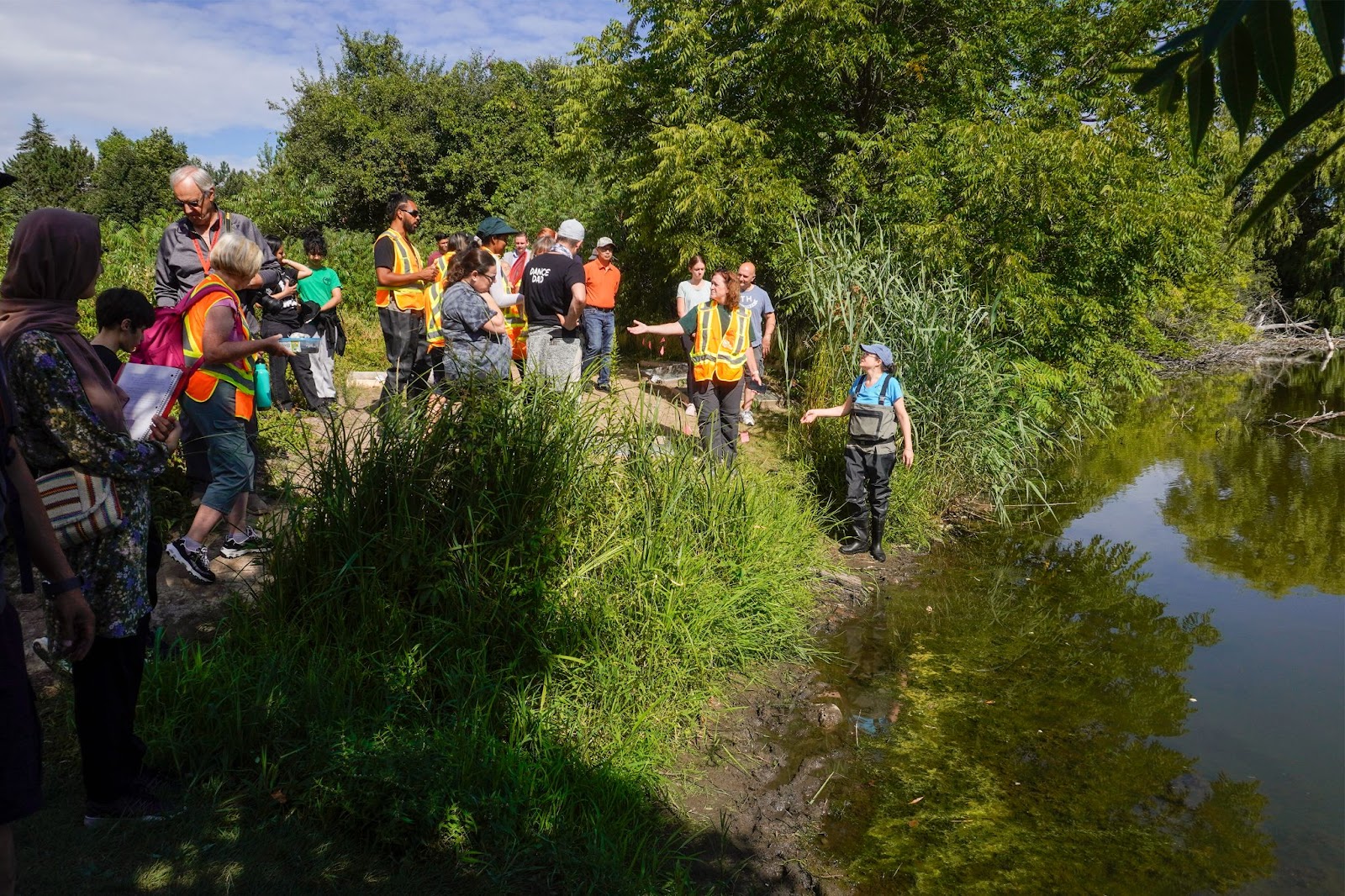 In addition to vital conservation efforts made by HLTT, it also provides education opportunities to anyone who is interested in learning more about the wildlife they share space with.

“I’m blown away,” Graham McGregor, MPP of Brampton North, said during the hatchling release. He noted the massive accomplishments the citizen-led organization has made within the last two years.

“Certainly I’ve heard a lot of concerns. It was an amazing project that happened years ago that brought down fatalities significantly. What I’ve heard from the community and what I’ve talked to the Turtle Troopers about is that it’s still not enough. There’s other things we need to do. I’m not a biologist to say ‘we need to put this fence here or this fence there,’ but what I can do and what politicians should be doing [is] listening to the experts that actually know what they’re talking about. Whatever the solution is, we have to work with the Conservation Authority, the Province, the Region, the City, we have to make sure we are doing whatever we can to preserve biodiversity.” 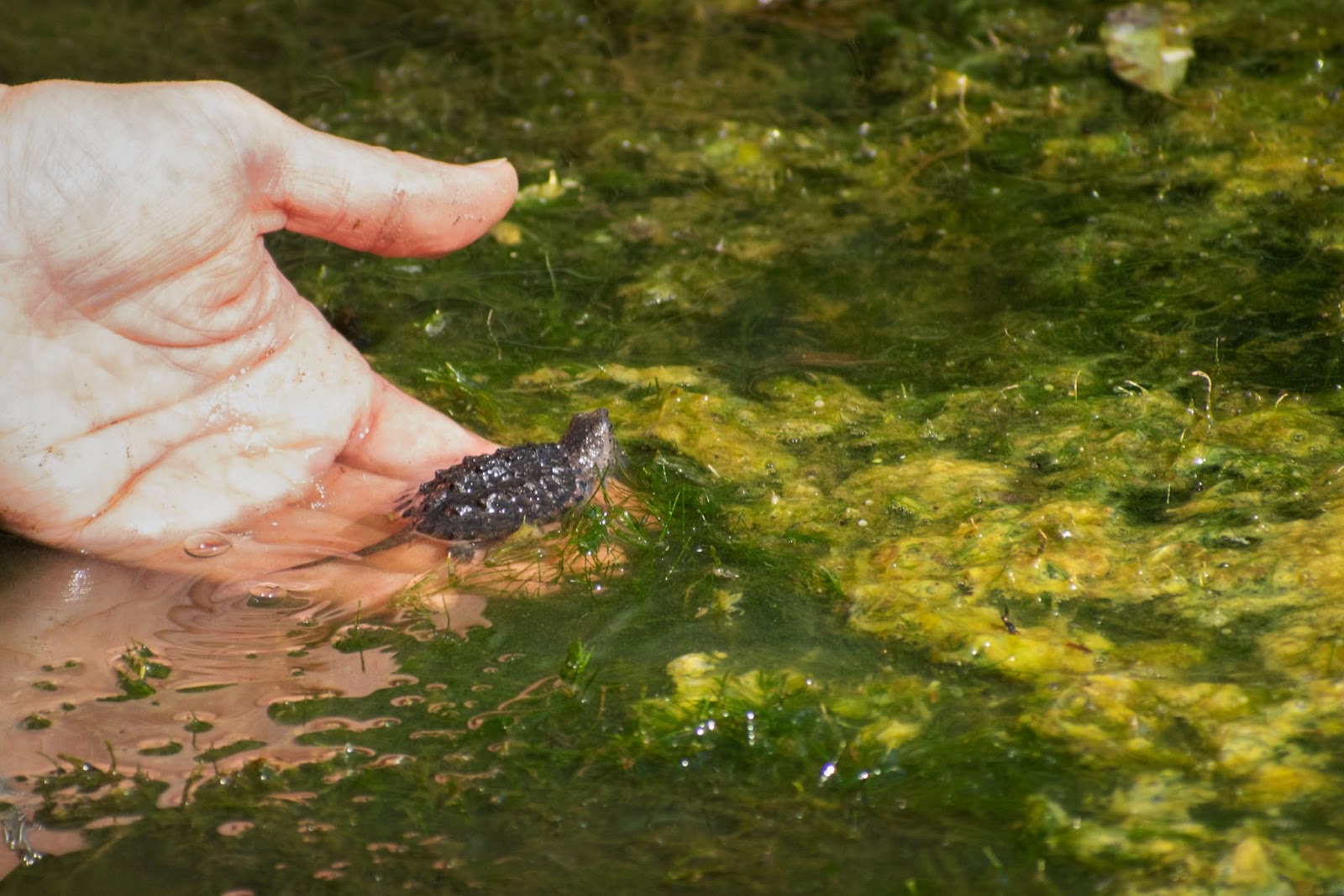 Snapping turtles, like other freshwater species, need dense aquatic vegetation in order to survive. Not only is it a staple in their diet, they need a variety of plants to use as camouflage from predators that they are vulnerable to for years. Pollution runoff from road salt, and garbage are two of many serious threats they face.

While wildlife rescues arguably are interfering with nature, they are merely responding to the already overwhelming interference that has gone unchecked for too long leaving many species in dire straits.

Taking preventative measures to protect species before they end up designated as a “Special Concern”, or worse, is crucial moving forward, in a climate as unpredictable as ours.