Marginalized students—particularly those who are Indigenous or Black—within the Peel District School Board are more likely to be labeled with behavioural problems, an annual report on the board’s Special Education Program has found.

A behavioural exceptionality is defined by the Ministry of Education as a learning disorder characterized by specific behaviour problems which adversely affects educational performance. It may be accompanied with an inability to build or to maintain interpersonal relationships; excessive fears or anxieties; a tendency to compulsive reaction; and an inability to learn that cannot be traced to intellectual, sensory, or other health factors.

Prepared by Jeffrey Blackwell, PDSB’s Acting Associate Director of School Improvement and Equity, and submitted by Rashmi Swarup, the Board’s Director of Education, the report presents data focusing on special education from the 2018-2019 school year. 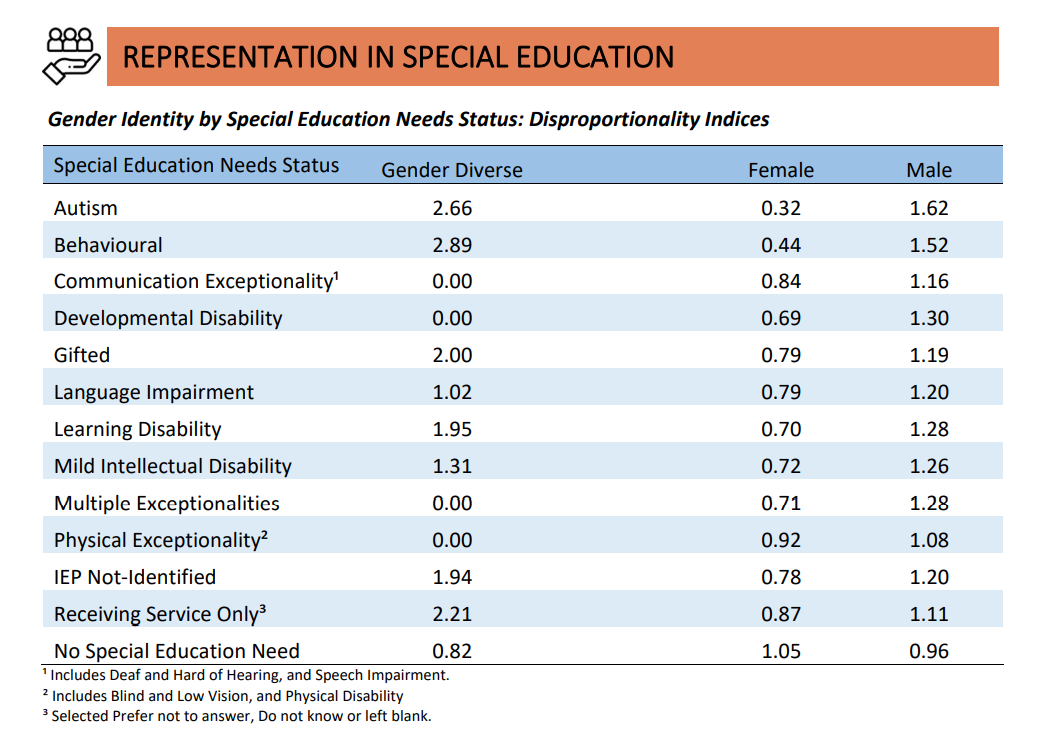 “Parekh and Brown (2019) note that the proportions of students referred to special education and their identified categories are inconsistent across Ontario school boards,” reads the report presented in March, citing the 2019 research article Changing Lanes: The Relationship Between Special Education Placement and Students’ Academic Futures by Gillian Parekh and Robert S. Brown.

“What is known however is that Black students are more likely to be referred to special education placement based on behavioural issues.”

The 2022 Annual Equity Accountability Report Card, which was reviewed by the Board in March, is part of the ongoing issue that stemmed from evidence of systemic bias and discrimination, including anti-Black racism, and serious issues related to governance, leadership and human resources practices within the PDSB, which led the Minister of Education Stephen Lecce to launch a formal review in November 2019.

2.2 times higher than their representation in the overall student body, with Black students making up only 10.2 percent of the secondary school population, but about 22.5 percent of students receiving suspensions.

Evidence from suspension records showed that white students faced no discipline for wearing hoodies, bandanas or things like hoop earrings, while Black students were often suspended for doing the same.

The 2022 Directive 9 - Equity Accountability Report Card: Understanding the Equity Gap in Special Education chart shows Indigenous students are most likely to be labeled with behavioural problems, followed by Black students.

“We also heard that unlike suspensions and expulsions, exclusions from classrooms are not recorded and parents are not notified. One vice-principal noted that children spend days staring at a white wall not learning and parents never know about this de facto form of suspension. Black students described an arbitrary disciplinary system that sought them out. Repeatedly we heard about Black students being suspended  from school, some as early as junior kindergarten. In response, we requested suspension data disaggregated not only by race, but also by grade. What we learned is alarming.” 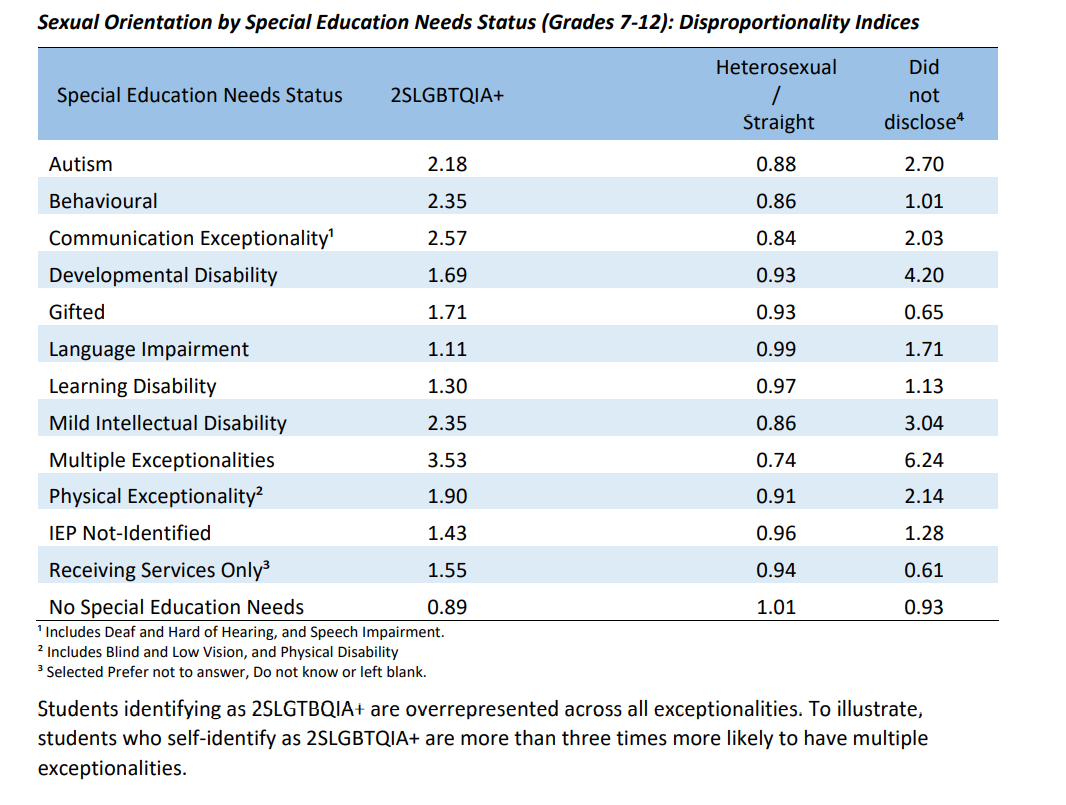 This chart shows 2SLGBTQIA+ students are almost three times more likely to be labeled with behavioural problems compared to their overall representation.

The review led to a series of 27 Ministry directives released in March, 2020, including one instructing the Board to develop and implement a comprehensive report that makes note of clearly defined ways the board plans to improve life for its students, including eliminating disparities in achievement of students from the Board’s various communities; establishing accountability measures and responsibilities for school and senior board leadership using disaggregated data; and assessing, evaluating, and reporting on progress toward improving outcomes for all students.

On April 28, 2020 the Minister of Education appointed Arleen Huggins to conduct an investigation of the PDSB to assess the Board's compliance with the Minister’s binding directives.

The following month, Huggins submitted her report and findings to the Minister of Education. She concluded that the PDSB did not have the ability or the will to provide good governance or to effectively carry out its responsibilities to oversee and ensure proper compliance with the directives.

On June 22, 2020, the Ministry appointed Bruce Rodrigues to supervise the Peel District School Board, taking over governance from elected trustees, most of whom have objected to the ministry’s involvement. This came days after students, families and staff held a protest called March for Justice, demanding equity and fair treatment within the PDSB.

It is the second largest school board in Ontario, serving a diverse student population across Brampton, Caledon, and Mississauga. The Board has 217 elementary schools and 42 secondary schools and over 155,000 students.

In PDSB’s 2021 Annual Equity Accountability Report Card: Baseline Data on the Equity Gap in Student Outcomes, it was found that Black girls were almost ten times less likely to be identified as gifted, whereas Black boys were 3.4 times less likely to be identified as gifted than their presence in the overall PDSB student population would predict. Giftedness is defined by the Ministry of Education as an unusually advanced degree of general intellectual ability that requires differentiated learning experiences beyond those normally provided in the regular school program to satisfy the level of educational potential indicated.

“Special education has drawn critique as being complicit in segregation across racial, class, and disability,” the PDSB March report highlights.

“Research indicates clear evidence of disproportionality of Black and racialized students within special education classes, pointing to a stronger focus on individual characteristics than on educational potential and attainment. Racialized students are overrepresented in every special education category including emotional/behavioural disorders, learning disabilities, intellectual disabilities, and speech and language disorders.”

The report presented to Peel’s Board drew similarities between their own special education program and the Toronto District School Board (TDSB) Home School Program (HSP). 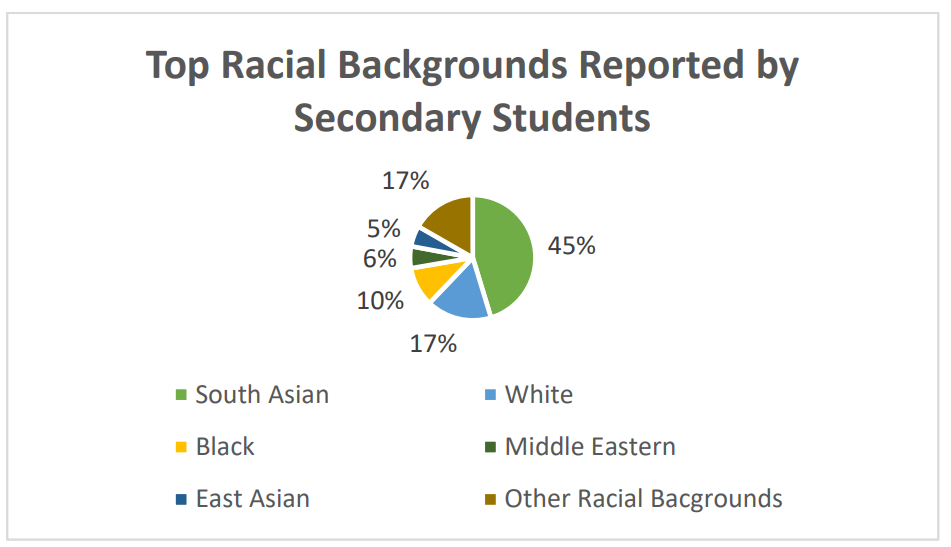 Within the HSP program, Black students were found to comprise 22 percent of students and were from primarily low-to-middle-income households with parents who were not afforded access to postsecondary education.

“Parekh and Brown (2019) found that the process of segregation implemented by the HSP directly correlated to student exclusion from academic programming in high school, which greatly limits future academic opportunities. In additional TDSB data, James and Turner (2017) found that fewer Black students than white students had no special education needs. When identified as having a special education need, a greater proportion of Black students than white students were identified as having non-gifted exceptionalities.”

It noted that in additional TDSB data, from 2017, researchers identified a significant impact that low expectations and stereotypes toward Black students have on academic recommendations and support toward educational pursuits.

The report said that this led to community members questioning the formal diagnostic tests used to determine placement and also questioned whether appropriate testing was used with Black students.

“These concerns centered on whether teachers used subjective methods to ‘diagnose’ students with learning disabilities without the use of formal processes or parental input.”

Indigenous students were found to be more than five times as likely to be identified with a learning disability compared to what their representation in the PDSB population would predict. 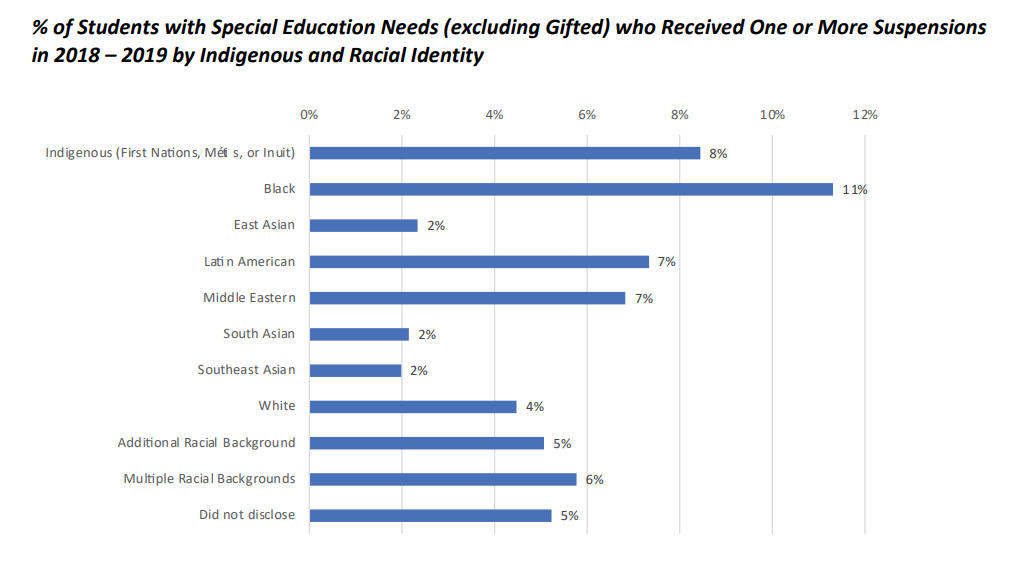 A range of actions for the PDSB are highlighted in the report. These include continuing to work with relevant parties to build understanding of the purpose of assessments for informing instruction and programming rather than for placements; as well as development of program descriptions and admission criteria to address the overrepresentation of Black, Indigenous and racialized students within special education.

Other recommended actions include: