Staff at the Region are looking to council to make services for human sex trafficking survivors a permanent fixture in Peel—an area that has become a hotbed for the crime in Canada.

The pandemic has made the situation worse.

“Given the adverse impacts that COVID-19 has had on service delivery, coupled with the rise in incidents of human sex trafficking, a permanent program in Peel during the restorative phases of the pandemic and ongoing is critical,” a staff report explains.

It will go before regional councillors on Thursday, along with the recommendation to make the $2.1 million in funding for support services and housing programs for victims and survivors, permanent. These supports, which include a hub for survivors—offering connections to mental health, financial and emplpyment assistance along with other aid—and dedicated supportive housing options, were created as part of a pilot Human Sex Trafficking Strategy approved by councillors in 2018.

The average age of recruitment or forced entry into the sex industry in Ontario is 13. According to Statistics Canada, there were 546 police-reported incidents of human trafficking in the country in 2019, a 57 percent increase from 2017, and the highest number of cases reported since the organization began tracking this data in 2009. The number decreased slightly in 2020 to 515, but Stats Can makes it clear, “the true scope of human trafficking in Canada is underestimated.”

The pandemic has only made data collection efforts more complicated, and stakeholders agree, the crime has spiked as COVID-19 has impacted economic livelihoods across the country, hampered police abilities to investigate complex crimes, and distracted government officials with one of the worst public health crises in decades.

“Capitalizing on people’s loss of livelihoods during the pandemic and the increasing amount of time both adults and children were spending on the internet, traffickers utilized social media and other online platforms to recruit victims,” reads a July 2021 report from the United Nations Office on Drugs and Crime. “[The pandemic] has skewed trafficking in persons statistics of officially detected cases. Figures suggesting a downward trend in trafficking in persons may hide the reality of the trafficking in persons situation during the pandemic – the scale of trafficking may, in fact, have increased, but the inability of the public to report suspected cases and the additional difficulties law enforcement face to investigate trafficking cases, may be temporarily hiding the reality of the situation,” the UN report details.

This is particularly concerning in the Region of Peel, where previous police-reported data show human trafficking happens here at almost twice the rate of the national average. According to those who provide assistance to victims and survivors, the pandemic has only “amplified” the need for services like housing and mental health supports.

As part of the Region’s pilot strategy to address human sex trafficking, a third-party was tasked with reviewing the work being done to ensure it was effective in achieving the desired goal of helping survivors with their most pressing needs. For the vast majority this means a safe place to live. That review—which has yet to be made publicly available—concludes the Region of Peel strategy was a success in increasing awareness about this crime in Peel and providing “coordinated access to dedicated and dignified services to victims, survivors and those at-risk of sex trafficking in Peel.” 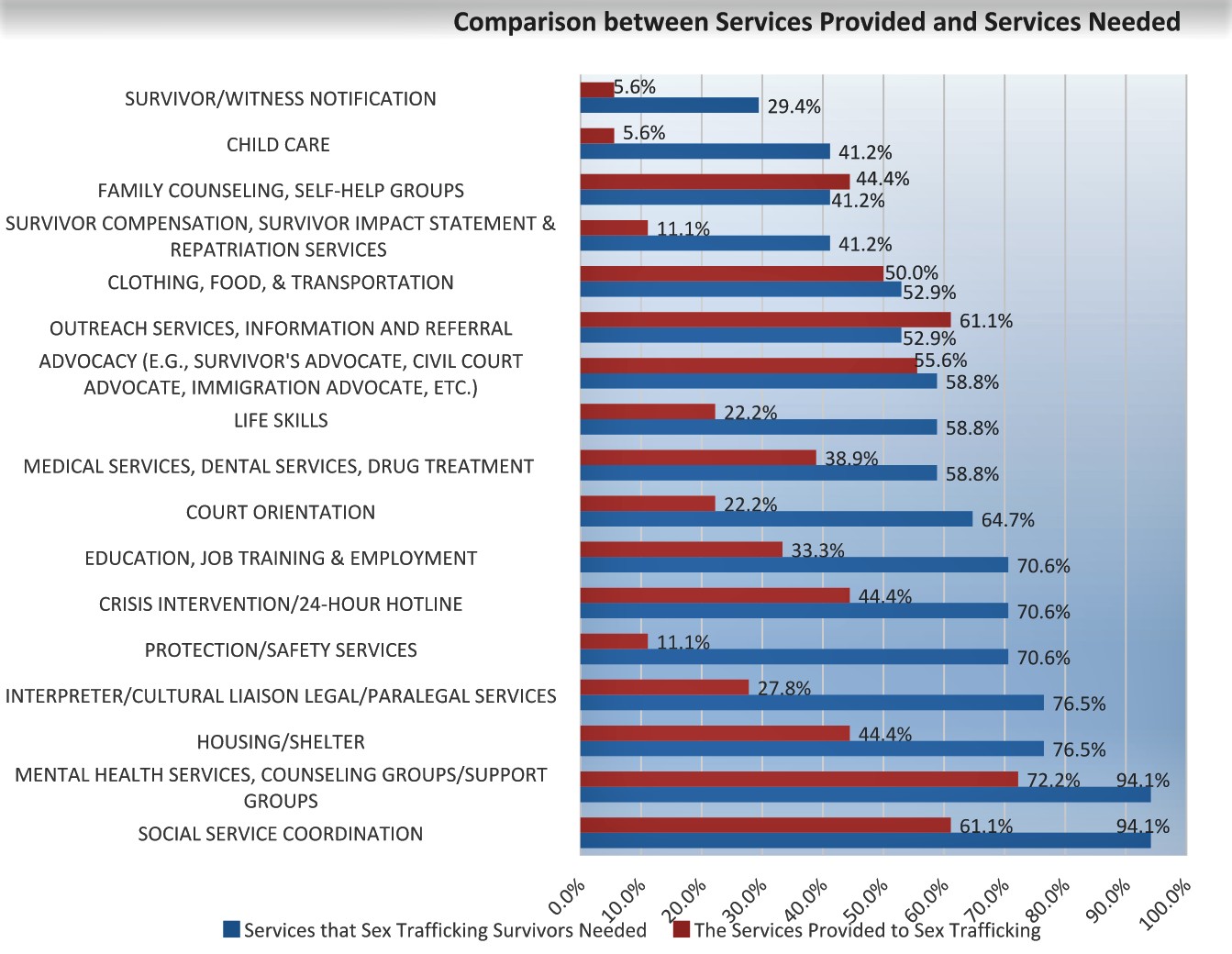 In many service sectors, there is a gap between what human trafficking survivors need, and what is actually offered in the Region of Peel.

The dire need among survivors for safe housing has been documented repeatedly by the Family Services of Peel (FSP), which has done in-depth research into human trafficking in Peel.

A 2019 study completed by FSP concluded housing was one of the most pressing needs for survivors and victims looking to exit the sex industry. This reality was reaffirmed by a report released by the Canadian Centre to End Human Trafficking last year with data from its Human Trafficking Hotline indicating the top request among those who called in was assistance with safe housing.

“Safe homes that have on-staff volunteers with human trafficking training can be excellent resources for victims, as often, victims do not know where to turn, to escape the complicated trade of sex trafficking,” FSP’s 2019 Human Trafficking Needs Assessment points out. “Adequate housing and shelter are immediate needs for many sex trafficking victims who wish to escape the sex trade. It is incredibly difficult for victims to become survivors if they cannot first escape the clutch of their pimps, who are often the ones housing them and providing this necessary resource.”

In their short time being operational, the Region’s pair of shelters have seen great success. The age of those who used these housing supports ranged from 12 to 24, and they stayed between 20 and 149 days. After leaving the shelter and accessing the Region’s dedicated services hub—which pulls all the needed supports for survivors under one roof—individuals reported “increased feelings of hopefulness for the future”; “a significant reduction in feelings of being unsupported and isolated”; and an increase in “mental and physical well-being and making progress on life goals.”

The Region’s overall strategy has also helped service providers that often operate with limited funding, and have trouble finding support for survivors, as their services are not comprehensive. According to the staff report, 71 percent of agencies reported the strategy has helped them enhance their trauma-informed services for clients, and 75 percent said their partnerships with other organizations have helped reduce barriers for survivors of sex trafficking, enhancing awareness among these individuals about what help is available to them—the 2019 FSP study showed one of the main reasons survivors do not come forward is they are unaware help is available.

There are many reasons why survivors of human trafficking do not come forward to police or seek other types of help.

On Thursday, councillors will have to decide whether to approve the $2.1 million program and make the housing supports and services hub permanent in Peel. The largest chunk of funding, nearly $1.4 million, supports the program’s housing for survivors, with the remainder going to the services hub.

Currently, regional taxpayers provide $858,454 toward these programs with the remainder coming from provincial taxpayers through Ontario’s government ($730,277) and a $600,000 draw from reserves.

With the uncertainty around future funding from the Province, it could mean the Region will be required to fund the full cost in upcoming budgets. The Province’s strategy is billed as a long-term solution for service providers, so, if the funding were reduced for Peel, it would mean a significant change of course for a PC government that made tackling this crime a priority during its first term in office.

An approval by councillors would signal to local agencies in Peel that the Region is a committed partner in the fight against the increasingly common crime of human trafficking. Research shows one of the main reasons victims, often tragically, do not try to escape, is because they don’t believe there is anywhere to go for help.

For decades, service agencies have been forced to make do with unreliable, inadequate short-term funding options for survivor supports that often mean the difference between life or death.