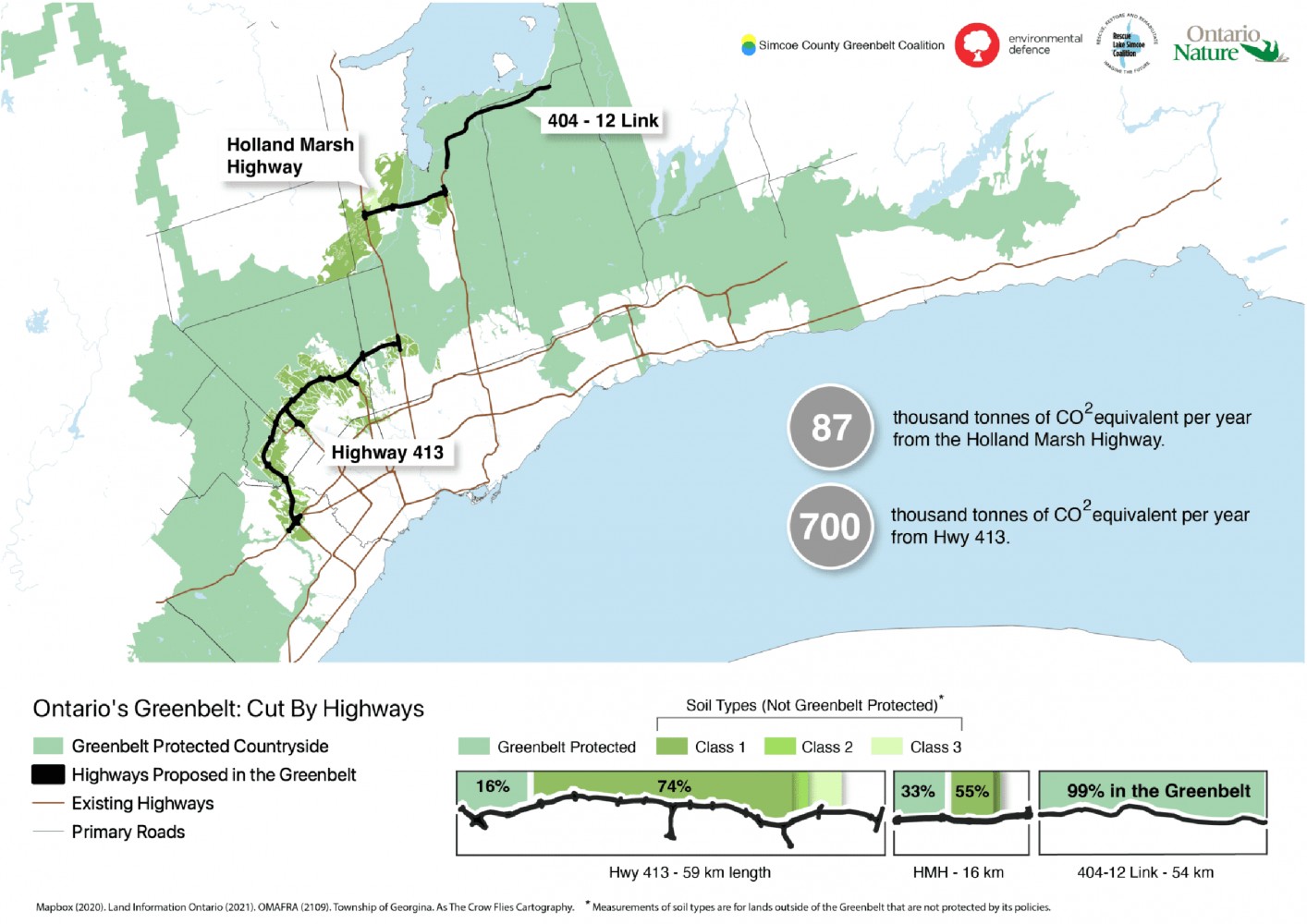 The PCs and Doug Ford have promised to build three 400-series highways through Ontario’s protected Greenbelt.

It’s a trio of projects Ford says are required to cure the congestion woes of the Greater Toronto Area. He has provided no valid studies or evidence to support how Highway 413, the Bradford Bypass or the 54-kilometre extension of Highway 404 south of Lake Simcoe will do anything to accomplish this goal. On the contrary, reams of transportation analysis, and decades of failed transportation planning in Ontario that relied on highway expansion, make it all but certain that these new highways would not solve long-term traffic issues. Neither Ford, his former transportation minister Caroline Mulroney, or his slate of candidates will acknowledge this fact.

Polling by EKOS for the David Suzuki Foundation shows Ontario residents do not support Ford’s highway agenda or his handling of the environmental file. 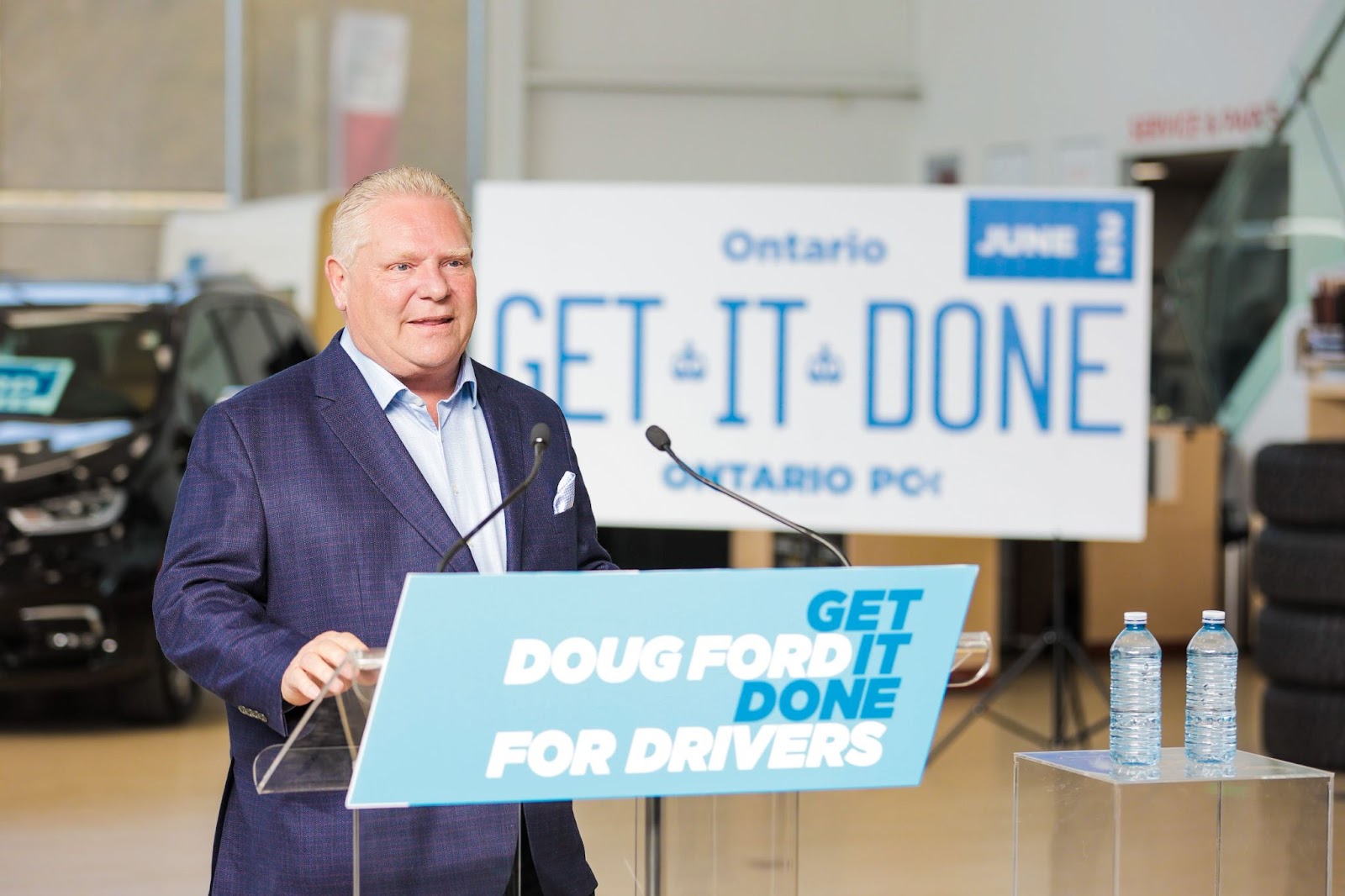 Doug Ford’s commuter-centric agenda may clash with the views of some voters with a recent poll finding the vast majority of GTA residents do not support his Highway 413 project.

Regardless of the overwhelming findings of the poll, and another similar one done by EKOS in the GTA for Nature Canada, which found only 39 percent of residents in and around Toronto believe the 400-series roadways will reduce congestion and only 29 percent support Highway 413, Ford and his PCs are charging ahead with the multibillion-dollar highway corridors at the top of their election platform.

The environmental degradation this highway-centric agenda would create is unprecedented in Ontario’s recent history and comes at a time when habitat loss and fragmentation are driving a global biodiversity crisis and Ontario is already seeing the impacts of a climate crisis that is being exacerbated by poor land use planning.

These highway projects have received strong opposition from environmental groups and dedicated local activists across southern Ontario. From demonstrations outside MPP offices, to delegations at councils across the GTA, to requesting the federal Impact Assessment Agency step in a review these projects—of which Ottawa has agreed to one, the 413—to even taking federal environment minister Steven Guilbeault to court for his lack of action, environmental groups have been dogged in their determination to save Ontario’s Greenbelt.

With the election just weeks away, they are making another attempt to halt these projects—and any future iterations.

A collaborative that includes the Simcoe County Greenbelt Coalition, Environmental Defence, Wilderness Committee, Ontario Nature and the Rescue Lake Simcoe Coalition are calling on Ford and other government leaders to alter the Greenbelt Act to prohibit 400-series highways within its boundaries.

Currently, the Act which governs what can and can not be constructed within the protected greenspace, includes an exemption for certain infrastructure, including highways. While it is arguable whether this exemption extends to massive 400-series highways—the author of the Greenbelt Plan Victor Doyle has previously told The Pointer that it does not—it is this exemption the PCs have relied upon to push forward with nearly 130 kilometres of highways that will impact approximately 2,200 acres of Greenbelt lands (not including the development that will follow), and 2,400 acres of prime farmland.

“All available research shows that building more highways increases traffic through a process called induced demand and attracts sprawl,” states Margaret Prophet, Executive Director of the Simcoe County Greenbelt Coalition in a press release. “Allowing these types of projects in the Greenbelt is a death by a thousand cuts and will change the Greenbelt from something that is supposed to be permanently protected to a land bank for developers and corporate interests.”

In a letter sent to Ford and other party leaders, Tim Gray, the executive director of Environmental Defence states it is imperative the legislative amendment go through not only to save the Greenbelt from becoming unlocked for future residential and industrial development, but for the protection of key watersheds in southern Ontario.

“The Greenbelt is helping keep Lake Simcoe clean by protecting the land around the lake from the impacts of development and punching highways through it weakens its ability to do that, and would add more salt, garbage, micro plastic (from tire wear) and oil residues into this delicate freshwater lake,” Gray states. “Ontarians believe it is time for our political leaders to step up and commit to stopping these proposed highways forever.”

New research made public by the partnership, spearheaded by the Simcoe County Greenbelt Coalition, shows the highways alone would pave over 2,200 acres of Greenbelt land, or 890 hectares. According to previous studies completed by the Ontario Greenbelt Foundation, these lands provide approximately $3,487 per hectare in natural capital annually to the province. This means that on top of the costs to construct these highways—between $6 and $10 billion for Highway 413 and between $800 million and $2.2 billion for the Bradford Bypass (the 404 extension costs remain unknown)—approximately $3.1 million in natural value annually will be destroyed. This means Ontario taxpayers will be on the hook not only for the exorbitant costs of these highways that will do nothing to solve Ontario’s traffic issues, but their taxes will feel the brunt of having to pay for the flood mitigation, the air quality control, the energy costs (from pumping AC during extreme heat days), and water purification which these natural assets are currently doing for free. 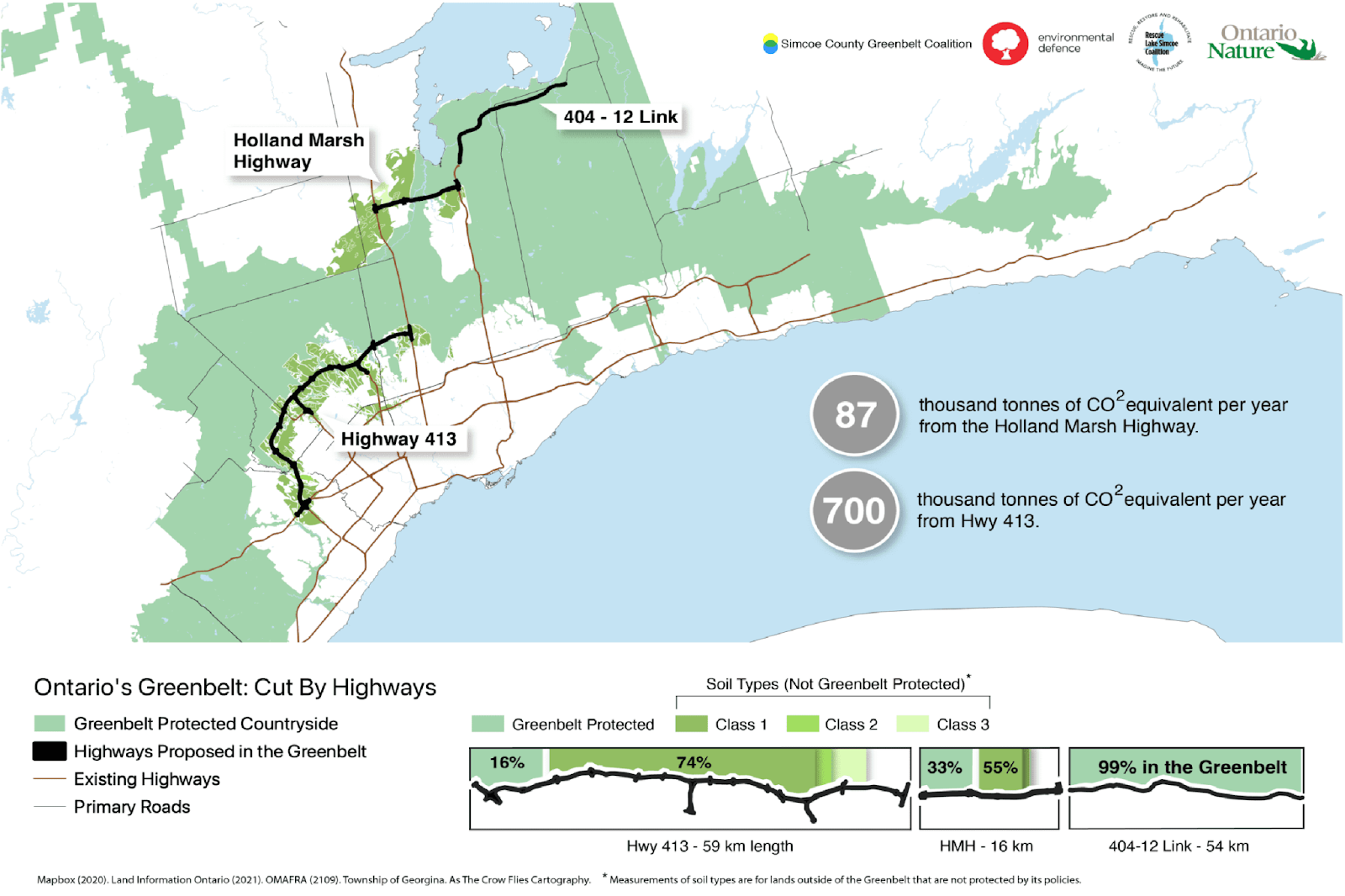 The PC government has refused to release any cost estimates related to these projects, despite issuing a Request for Proposals for “early works” on the Bradford Bypass, a process that is typically made public. The lack of transparency means Ontario taxpayers are handing over an unknown amount of money for highway projects that will provide them next to no benefits.

Also not acknowledged by the PCs is the impact the construction of these new highways will have on Ontario’s climate change goals. The Province has set a target of reducing greenhouse gas emissions by 30 percent below 2005 levels by 2030. This will require a 12 megatonne reduction in emissions from current levels. Highway 413 and Bradford Bypass will combine for an estimated release of 787,000 tonnes of CO2 equivalent per year after completion.

This is on top of the devastating impacts these projects will have on Ontario wildlife and species at risk. Previous investigations by The Pointer into Highway 413 and the Bradford Bypass have found 40 species listed as endangered, threatened or of special concern that rely on the habitat that will be destroyed by these highways. Experts have said the number is definitely higher. This persistent crush of urbanization has pushed many watersheds in southern Ontario to a near breaking point.

"The constant push of cities to grow and convert natural areas to shopping centres, residential developments, parking lots and roads threatens these plants and animals and their habitat,” reads a 2011 study of biodiversity in the Greenbelt. “Natural areas are paved over, split apart and whittled away to increasingly small fragments. Almost unbelievably in some instances—witness Jefferson salamanders crawling through the basements of homes built in the way of their migration paths to get to their breeding grounds—plants and animals continue to eke out their existence within this altered environment"

This compromised existence is a concern to anyone who cares about the preservation of the planet, but it also should concern politicians who preach fiscal responsibility. Numerous studies have outlined how the loss of species and their habitat has a direct impact on the economy and the health of the surrounding area.

“Ecosystems maintain a delicate balance where each life form acts in concert to allow the system to function. Changes to or losses of all or part of these systems, such as eradicating an animal population with pesticide or destroying a woodland through conversion to subdivisions, affect the ability of the system to provide the resources or services necessary for a healthy, functioning environment,” the 2011 study states. “All species, including humans, receive direct and indirect benefits from healthy, functioning ecosystems. The loss or weakening of these systems can have both anticipated and unforeseen consequences. For example, nature deficit disorder is a term coined to underline the negative health impacts (increased anxiety, depression, obesity) associated with childhoods spent largely indoors, dissociated from the natural world. Indeed, research indicates that many benefits arise from regular exposure to nature, ranging from improved academic achievement and family relationships to lower crime rates and increased longevity.”

The request to ban highways through the Greenbelt has been met with mixed response from political leaders.

Green Party Leader Mike Schreiner has been the only one to fully commit to the ban.

“We have been consistent and clear that we are opposed to any new highways in southern Ontario,” he said in a released statement. “Ontario Greens will continue to lead on stopping the sprawl and protecting nature. Doug Ford’s sprawl agenda is making life more expensive, polluting the air, and is making the climate emergency worse.”

The NDP did not make the same commitment, but have previously vowed to cancel both the Bradford Bypass and Highway 413 if elected—promises that have been inserted into their election platform.

The Liberal government, while critical of Ford’s “abysmal” environmental record, did not commit to amending the Act to ban highways in the Greenbelt.

“Their priority is letting their rich buddies bulldoze the Greenbelt and build highways like the 413 that will only lead to more greenhouse gas emissions and congestion. We do not believe that building new multi-lane highways through the Greenbelt are the answer to relieving gridlock and keeping people moving,” stated Will Wuehr, a spokesperson for the Liberal Leader Steven Del Duca in a statement to The Pointer. He reiterated the Liberal promise to cancel Highway 413 and pause work on the Bradford Bypass so an updated environmental assessment can be completed. The current study the PCs are using to support the highway project was completed over two decades ago.

“If this assessment fails to meet environmental and community standards, we’ll stop the Bradford Bypass just like Highway 413. We are committed to making Ontario a place to grow again by protecting and expanding the Greenbelt,” Wuehr stated.

It’s clear where the PCs stand. The government’s recently released transportation plan for the Greater Golden Horseshoe has a clear focus on new highway infrastructure. The GTA West Highway and the Bradford Bypass are two of the first projects mentioned in former transportation minister Caroline Mulroney’s opening statements. The word “highway” is mentioned over 100 times in the 68-page document. The term “public transit” appears only four times; “subway”, 24; and “climate change”, 16.

To make his priorities abundantly clear, Ford’s first stop on his campaign for reelection was in Brampton to promote Highway 413.

The provincial election is June 2.