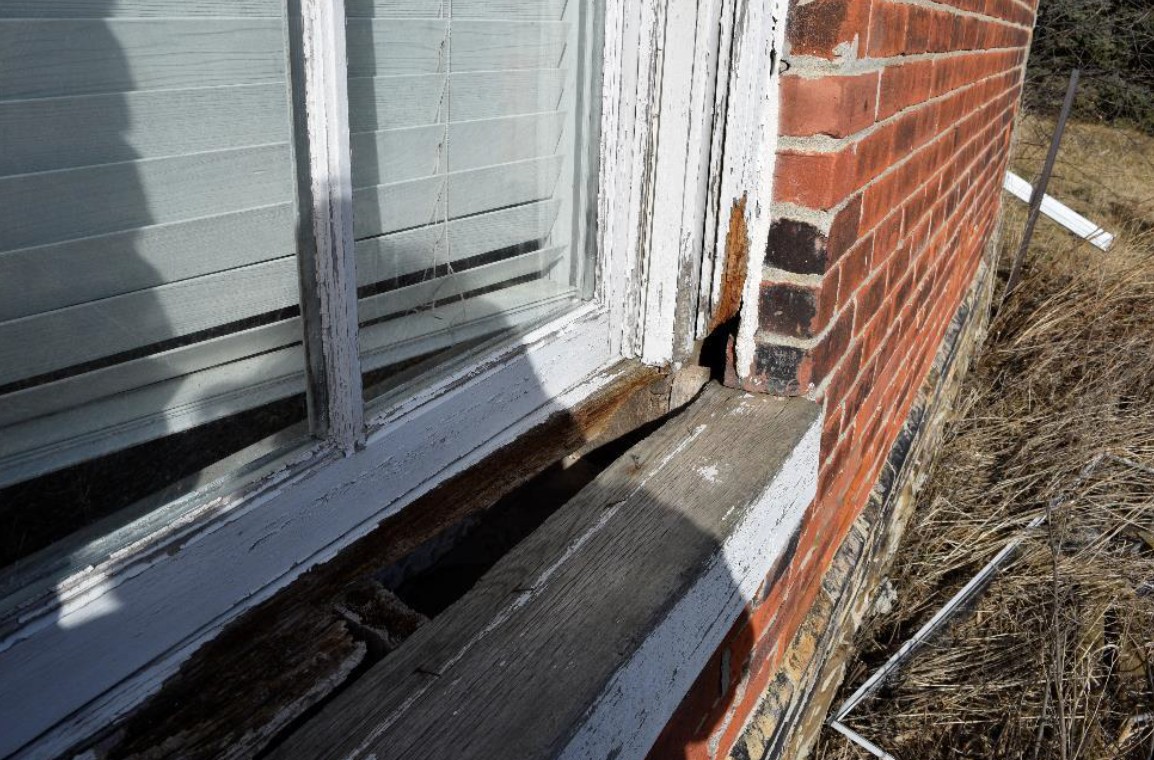 There are few places throughout Mississauga safe enough for residents to walk back in time. The Britannia Farm site fills visitors with a sense of nostalgia, educating them about life in the rural more than a century ago.

Labelled a cultural heritage landscape by the City of Mississauga, the current site consists of four structures, a schoolhouse and farmhouse—both original to the site—along with the Gardner-Dunton House and the Conover Barn, both of which were moved to the site from other locations.

All except the barn are designated heritage buildings listed with the City of Mississauga.

A heritage impact assessment by Parslow Heritage Consultancy (PHC) describes a number of other elements that offer visitors a glimpse into what farm life looked and felt like long before Mississauga became the sixth largest city in Canada. Remnants of the Suburban Electric Radial Railway—which previously ran from Guelph to Toronto—along with original hedgerows, field patterns and fence lines, “significant in terms of agricultural history of the site”, transport those who walk around the vast space.

It was designated and protected for future educational use almost two hundred years ago. 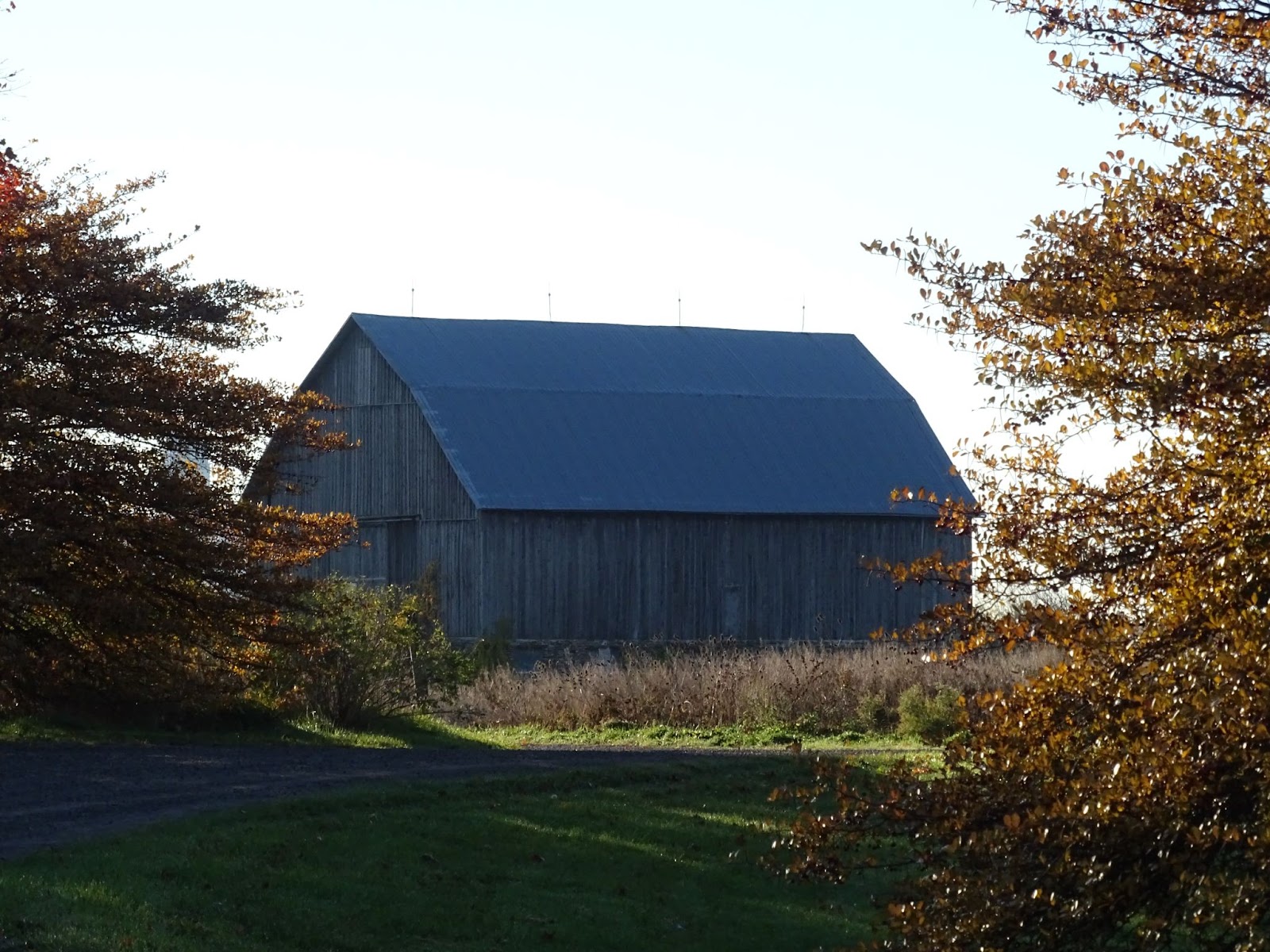 The Conover Barn on Britannia Farm.

While the site has been spared most of the effects of surrounding urbanization as Mississauga has rapidly urbanized, the city has encroached right onto the heritage landscape’s immediate edges. The PNC report was commissioned by Mobilinx—the consortium constructing the Hurontario LRT—to ensure the vibrations from heavy construction along Hurontario Street, which runs right along the property’s eastern edge, do not impact the heritage buildings on Britannia Farm.

The experts concluded the activity does not pose any direct threat to the buildings, but they made an unsettling discovery during their assessment—the sad state of the designated heritage buildings on the site.

In 1833, King William IV announced the land would be granted to trustees William Thompson, Reverend James McGrath and Joseph Gardner specifically for educational purposes. When a province-wide educational system was introduced the property continued to stay in the care and control of the Peel District School Board (PDSB).

Since PDSB owns the land, its board is in charge of making sure plans are in place to maintain the buildings. It's clear from the report that this has not been happening.

“Buildings have to evolve and their use has to, there needs to be a plan for it,” Matthew Wilkinson, a Mississauga historian told The Pointer. “I think what we're not seeing is the plan for what the care of those buildings will be, and future uses will be.”

Britannia Farmhouse, which historians believe dates back to 1840 with possible renovations or additions in the 1880s, is pretty much falling apart.

According to the consultants there are “multiple” examples of structural failure, the windows and trim are “degraded” so badly the interior is exposed.

In its heyday the farmhouse had clean outlines around windows and doors, polychromatic brickwork can still be recognized today, and a decorative board brings character to the overall look of the home. 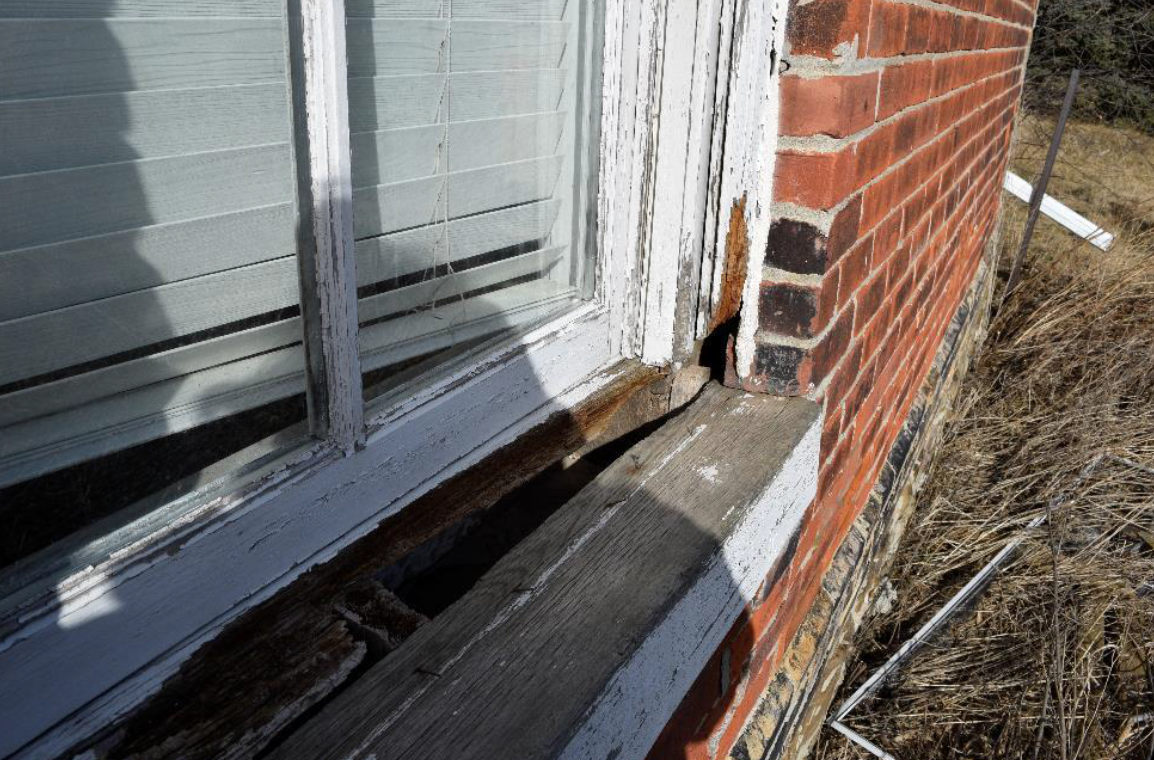 Some of the decaying features of the farmhouse include unprotected wood around windows.

The cedar shingles are not functioning, allowing water to seep inside. The brick once brightly gleaming in the sun is “suffering” from decades of neglect and exposure to the elements. It seems even simple maintenance tasks all homes need like trim painting have been ignored, “resulting in exposure of underlying wood.”

Window shutters are falling off hinges or missing entirely.

“At the time of inspection Britannia Farmhouse presented as abandoned, displaying no attempt to maintain the structure or the surrounding landscape,” the consultants report states.

The Pointer asked PDSB to comment on the apparent lack of attention to the heritage buildings it is responsible to preserve.

“The current COVID-19 pandemic and many safety measures resulted in long-term closure of facilities, staff working remotely, and the suspension of our use of many of the sites and some regular inspection programs,” a PDSB spokesperson said in an email. “Now, Facilities staff have begun re-implementing a more routine schedule of inspections and our Maintenance Department is identifying and addressing repairs.”

While the pandemic may have impacted maintenance in the short-term, the PHC report makes it clear the deterioration did not occur over a two-year period.

“Dilapidation is a slow process often,” Wilkson said. “Now that we're starting to see it as visible, that's not a good thing.”

Heritage structures owned by the City of Mississauga have extensive maintenance plans to ensure upkeep, allowing for consistent repairs to be done and preservation to continue into the future.

“The School House has also resumed welcoming students as part of our Field Study Centres programming, and the Gardner-Dunton House has been occupied over the last 20 years by various administrative offices,” the spokesperson said. “The Barn has been used for storage and other needs to support the Field Study Centres, and the farmhouse has remained vacant pending repairs that will be performed following a detailed review of the facility.”

As a historian and a member of the Mississauga Heritage Committee, Wilkinson says it would be a significant loss to the City to see the Britannia buildings decay to the point of no return.

Structures with foundational issues are harder to bring back from the dead. Michael Spaziani, a heritage architect in Mississauga said there are various different ways to save buildings, or pieces of them.

“There are other cases where simply the building isn't stable, but the facade is still functional and worth saving,” he told The Pointer in an interview. “In those cases, you actually prop up the walls and you rebuild all of the interior behind the wall, and then at the end of the day it looks like it has always been there, but in fact, it's a new building.”

The Gardner-Dunton House is in the same despicable state as the Farmhouse. The original structure is dated to 1825 and designated due to its Georgian Revival style, which can be seen in the symmetry of the five bay facing windows. 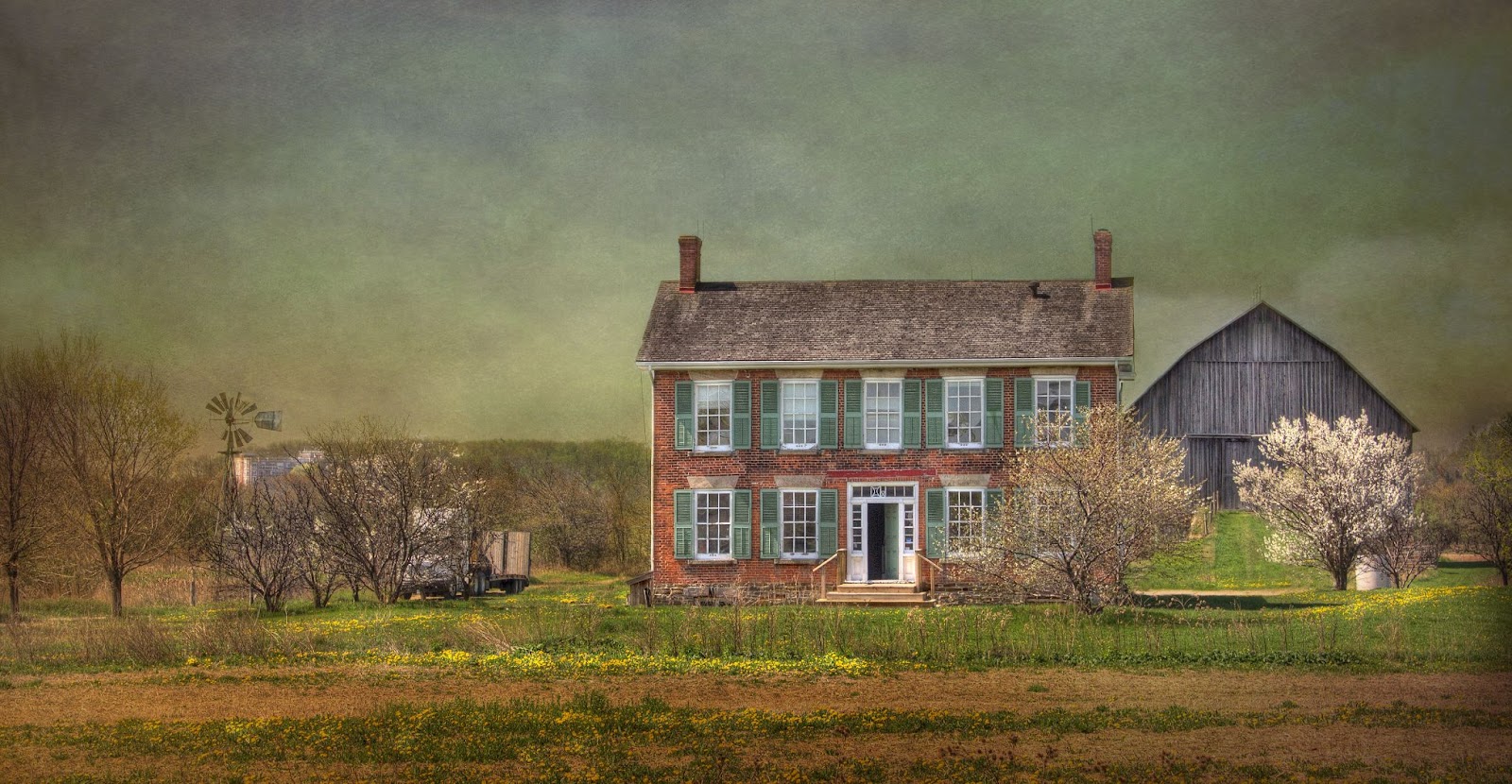 In its heyday the Gardner-Dunton House was magnificent and had generations of families living inside.

According to the report, the Gardner-Dunton House is one of two structures still standing with this distinct architecture, the Bell Hotel at 1090 Old Derry Road West is the other.

After its relocation from 5880 Hurontario Street (down the street from Britannia Farm), it was restored and a brick wing was added after the original was destroyed in a 1970 fire.

Similarly to the farmhouse, the Gardner-Dundon House “exhibits signs of neglect.”

The consultant did not believe annual maintenance has occurred because the windows have paint chipped away exposing the wood underneath. The shutters seemed to be intact according to the report, but need restoration.

Over the front door there is what architects call a rectangular transom which divides the doorway and window above. During this period of time, the transom would have patterns inside called tracery. The report explained this portion of the house is a “statement of cultural significance.”

This small, but beautiful piece of history is almost unrecognizable and a poor repair using commercial silicone seems to have been used. 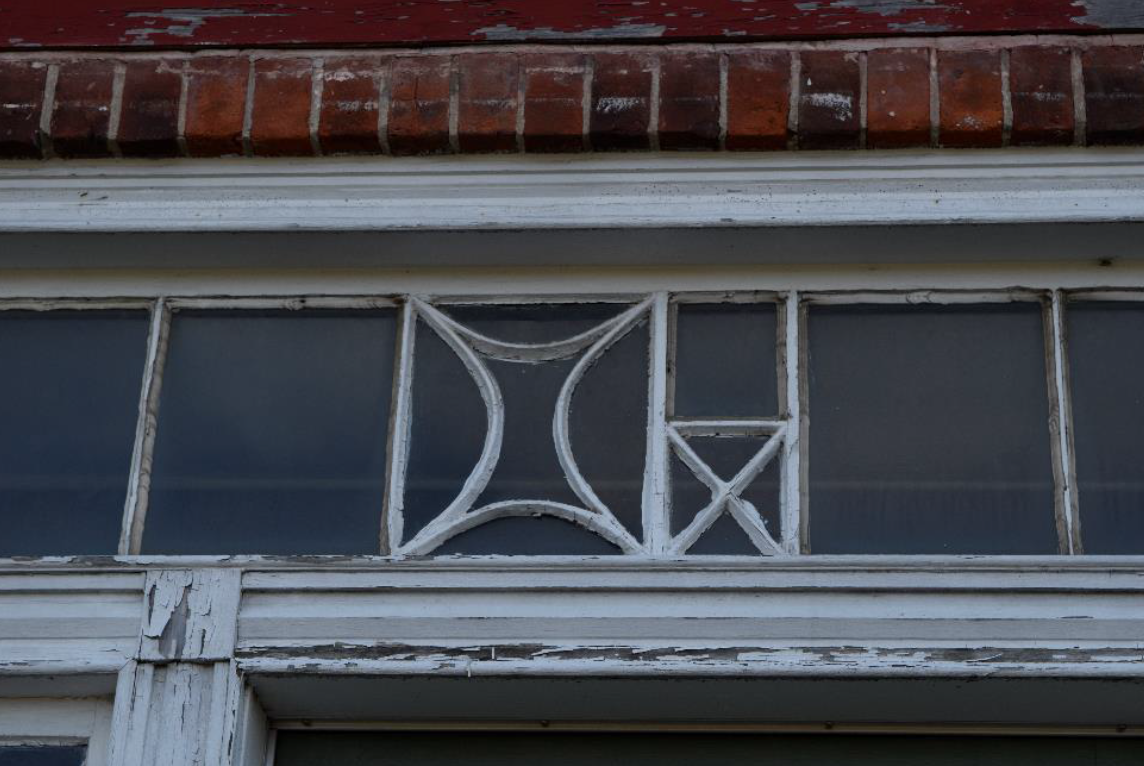 The small detailing on heritage buildings is what makes them unique today.

“Overall Gardner-Dunton house is in need of extensive repairs to all exterior woodwork and a detailed inspection of all mortar joints to identify deficiencies in need to repair,” the consultant concluded.

It’s clear from the report that PDSB has not been upkeeping the structures, and one potential reason for why could be the cost. According to Spaziani the more dire the structure is the more costly the repairs, and even with a good upkeep, heritage buildings can be expensive.

As someone who designs and creates plans to restore heritage buildings, Spaziani says today’s modern construction can recreate the elements of the past.

“You can recreate stone lintels, you can recreate very elaborate detail, of course, it adds cost,” he told The Pointer. “Today’s building is much more simplified, it seems that we have the skills to recreate it if we choose.”

History often repeats itself, and historians can often see timeless structures slowly being destroyed. Wilkinson refers to this as “demolition by neglect.”

Mississauga has seen this before with the Sanford Farm that once stood between Mavis Road and Eglinton Avenue West. According to Wilkinson, the land was bought by a developer and over the course of their ownership, caught fire three separate times, until only ruins stood.

Today, the foundation that once held a farmhouse is commemorated in the Sandford [different iteration] Park. 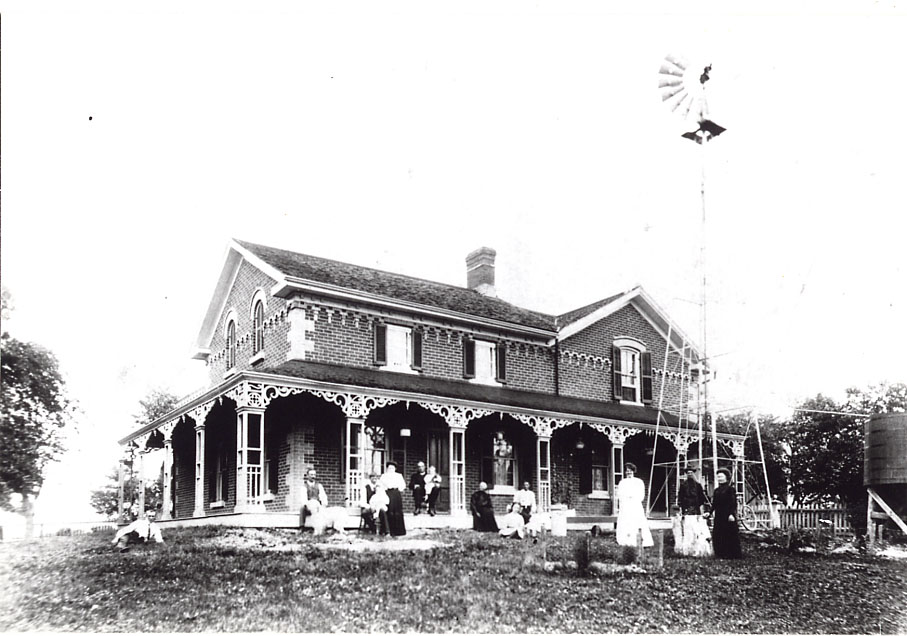 Pictured above in 1908 was the Sanford family. In 1999 the family left and the land was sold to Southlawn Developments. The house was demolished in 2006.

“But that's all that’s left of it,” Wilkinson said. “Long, sad story of gradual, but ultimate loss.”

An avoidable loss, one Wilkinson and other historians hope is not the inevitable fate of the Britannia Farm structures.

The schoolhouse sitting on the edge of busy Hurontario was constructed in 1870 to serve the school-aged rural children of that time. In 1959, the last students were taught inside, merely two decades before Mississauga became a city.

Unlike the two other designated heritage structures, the schoolhouse is in better condition, but the consultant explains there are no signs of annual maintenance.

There is chipped and peeling paint along the window sills and the trim around the door. Bricks have come loose around the front steps which the consultant noted were slippery.

In the same way small medical ailments left untreated can worsen over time, small cracks and chips in a buildings exterior, if left for a long period of time, could result in further deterioration of the structure and a costly repair bill. The report notes a long-term annual maintenance plan should be created.

“The school board will be undertaking a detailed review of all buildings on the farm, and guided by the findings of the review, we'll develop a short-term and long-term plan for the work required to ensure the preservation of the buildings,” a PDSB spokesperson told The Pointer.

It’s unclear why such plans were not already developed for the heritage structures.

Of all the buildings the Conover Barn was in the best shape. The report only mentioned “minor damage” to some of the siding. The barn was brought to Mississauga from Sheridan Oakville Nurseries and is believed to be from the late 1880s.

Councillor Carolyn Parrish told her fellow councillors the heritage committee was “appalled” by the findings in the report.

“The condition of them as they came to heritage this week was disgusting,” Parrish said April 20. “They [PDSB] have not heated those buildings, they've allowed rot to set in and all the windows, parts of them are collapsing. I hate to see what the inside looks like.”

Parrish along with Councillor George Carlson (a former PDSB trustee) moved a motion requesting the City write a letter to PDSB and the province “reminding” them of their duty to maintain the structures.

The buildings on Britannia Farm are not just structures, they are living stories from the past.

“Every heritage building has a story behind it,” Spaziani said.

“All of that is revealed when you dig into heritage, and when you preserve a building, you can tell that story.”