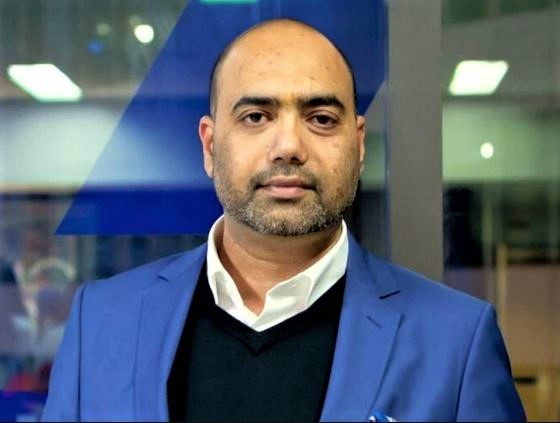 Snover Dhillon, a Brampton man with close ties to Mayor Patrick Brown, has been named by Punjab Police in India for allegedly masterminding the murder of a semi-professional athlete.

A Brown spokesperson says Dhillon has not worked with the mayor since he was elected in 2018.

Sandeep Singh, also known as Sandeep Nangal Ambia, was shot dead in Punjab on March 14 while playing in a kabaddi match. The sport is popular in the northwestern state, and the case has drawn national attention across India.

On March 19, Punjab Police announced four arrests in the case, and named another man, Brampton resident Snover Dhillon, as the alleged main conspirator. 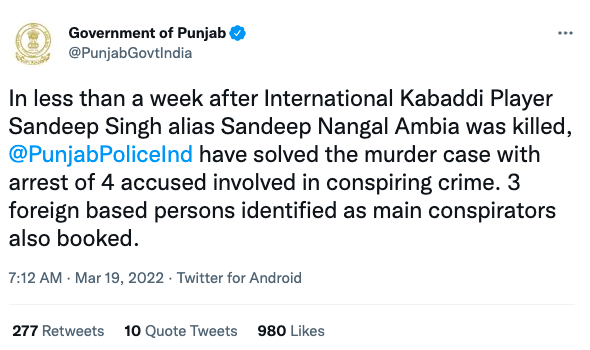 The Government of Punjab tweeted that Punjab Police has solved the high-profile murder case.

The Statesman, a prominent news publication in India, reported that during an interrogation of one of the four men arrested in connection with the shooting, he told police “Snover Dhillon had formed the ‘National Kabaddi Federation of Ontario’ and tried to convince different players to join his federation. However, most of the renowned players were associated with ‘Major League Kabaddi’ being managed by the victim Sandeep.”

The Statesman, along with numerous other Indian publications, reported that Punjab police allege the suspect confessed that Snover Dhillon had allegedly provided instructions to the man, which led to the killing of the victim.

The allegations made by Punjab Police against Dhillon have not been proven in court and police are now trying to have him extradited according to Indian media reports.

The Hindustan Times reported that Dhillon “denied the charges against him and said that he was in talks with lawyers in India and will pursue the matter legally.”

Dhillon, who is now wanted in connection with the murder, worked closesly with Patrick Brown for years when he was a Barrie area MP and then the Ontario PC leader.

The Pointer was not able to contact Dhillon. Some of his social media accounts appear to have been deleted or changed.

Corporate records identify Snover Singh Dhillon as one of the directors of the National Kabaddi Federation of Ontario.

Dhillon was involved in numerous controversies and was convicted of fraud while he was working with Brown.

The National Post reported that in 2011 Dhillon was sentenced to 41 days in prison after stealing $10,000 from the accounts of others he was working for using their bank cards. He has been fined for working as a real estate or mortgage broker without a licence, and regulators have released public notices cautioning people about the man’s business claims.

None of it stopped Brown from using Dhillon to further his political ambitions.

Dhillon signed up members in GTHA ridings who could then vote for preferred candidates to represent Brown’s party ahead of the 2018 provincial election, four Ontario PC members told the National Post.

The Post reported in 2018 that under Brown, “Dhillon played a controversial role in a number of the candidate-nomination votes that have resulted in accusations of voter fraud, ballot stuffing and other irregularities. A leaked email exchange among top party officials suggests Dhillon was paid $22,000 by a man vying to be the candidate in a Hamilton riding. Sources say the money was meant to buy memberships, so those people — or their substitutes — could then vote for the potential nominee.”

It was alleged that under Brown’s leadership and Dhillon’s orchestration some candidates bought memberships themselves, that newly signed members voted outside their ridings and that some cast ballots “using other people’s identities.” 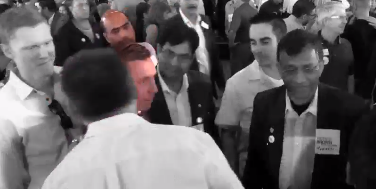 Patrick Brown and Snover Dhillon (in colour) during a campaign launch for Brown.

The Post reported that “Conservative activist John Mykytyshyn said he attended about 20 of the party’s nominations and saw Dhillon working at most of those.”

Another source told the newspaper Patrick Brown introduced Dhillon “to dozens of candidates across the province and money was earned (by Dhillon).”

“I’ve never seen so much money involved in local riding nominations than in the last year,” the source told the Post in 2018.

The Globe and Mail reported in 2018 that “Mr. Dhillon has connections to a variety of allegedly questionable nomination and campaign practices. He set up a shell company that received thousands of dollars from one PC contestant – ostensibly for work on his nomination campaign, which was unsuccessful – and worked for two others in nomination races that would later be overturned because of irregularities.” 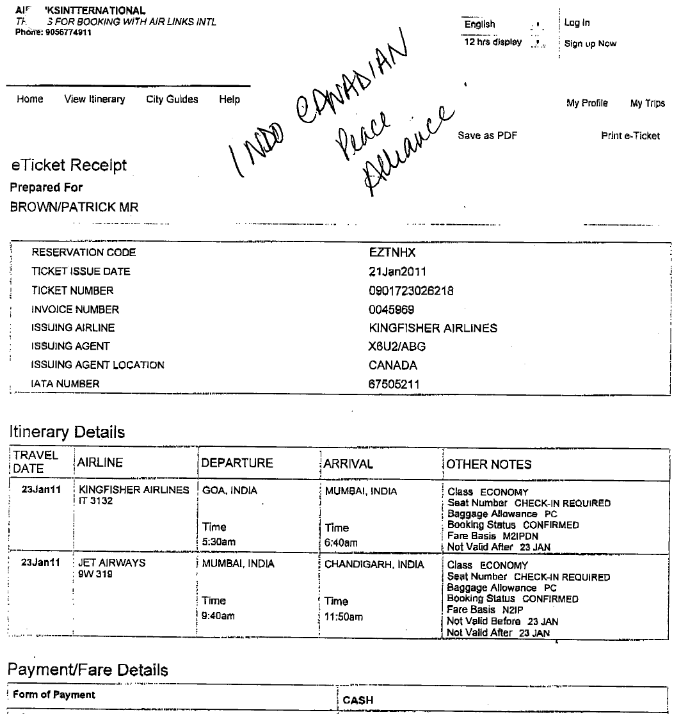 According to the National Post and Barrie area website The Brown Retort, which published public information about Brown while he was an MP there, Dhillon had previously sponsored trips to India for Brown in 2007 and 2010 and in 2011 an organization set up by Dhillon paid for flights Brown took inside India.

It’s unclear why Brown was there. He has taken more than 20 trips to the country and has continued doing so since becoming mayor of Brampton, as he prepared for his run for the CPC leadership.

Brown claimed to distance himself from Dhillon in 2011 after the man’s fraud conviction. But in early 2016, according to an article two years later by the Post, “Brown tweeted a photo of a billboard in Punjab that welcomed him to India, with a number linked to Dhillon listed at the bottom.”

In 2018, after Brown was forced to step down as PC leader following allegations of sexual misconduct, Dhillon took to Facebook to voice his support for the fallen Conservative leader whom he had worked to get elected as Ontario’s premier. “I appeal to all Patrick Brown supporters who love and respect him to revoke their memberships and to NOT vote for PC,” he wrote.

Following Brown’s departure six nominations under his leadership were later overturned when Doug Ford took over as PC leader in what he called an effort to clean up the “rot” created by Brown.

Gary Collins, a spokesperson for Brown who works in the mayor’s office, told The Pointer Dhillon has not worked with Brown since he was elected Brampton Mayor.

“Mr. Dhillon has not worked for Mayor Brown, nor has he provided advice, or even supported Mayor Brown and our office,” Collins wrote in an email last week.

The Pointer reached out to Punjab Police in India for information on the murder case involving allegations against Dhillon and the reported extradition effort. No response was received ahead of publication.