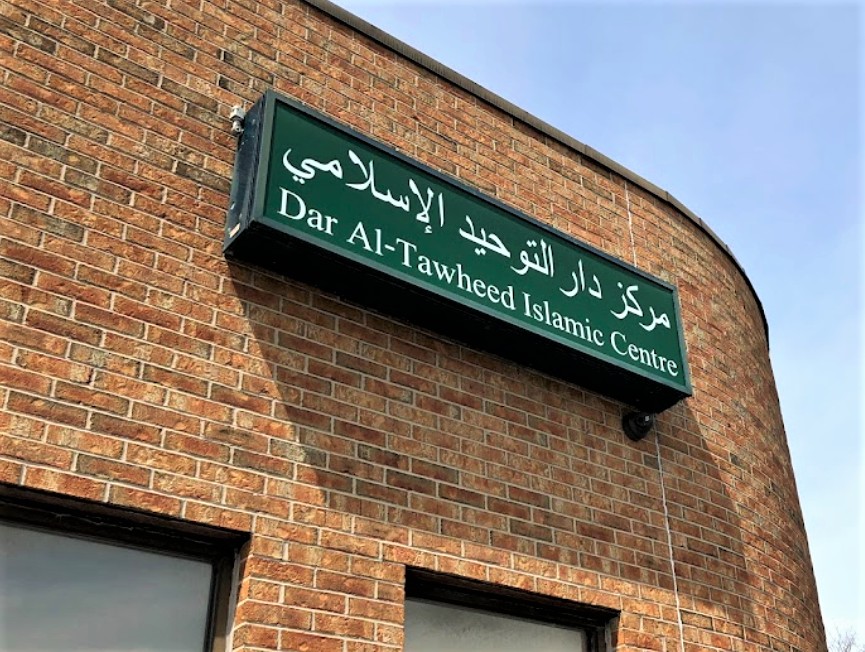 Saturday March 19, Noorani Sairally made his way to Dar Al-Tawheed Islamic Centre on McAdam Road in Mississauga, as he does everyday for his morning prayer.

As a practising Muslim, Sairally prays five times a day, twice daily at the Mosque inside the Islamic Centre. Sometimes he’s joined by his family but usually only during special celebrations like Eid al-Fitr.

He’s lived in Mississauga his entire life and has been active at the Mosque, volunteering for over ten years.

Saturday he was there early for Fajr the sunrise prayer. He headed into the Mosque with about 20 other men. He settled in at around 6:46 a.m. sitting on the right side. Sairally recalls eight minutes into his prayer, he heard a curious hissing noise, which he thought was coming over the speaker.

Following the sound a scream shrieked out that made his skin crawl. When he broke his prayer and looked left toward the startling noise he saw a man he didn’t recognize. He was standing with a canister that looked like pepper spray in his hand.

“That's when I saw all these commotions going on, and the first thing that came into my mind is that this guy has a gun,” Sairally tells The Pointer.

Two people jumped on the man, later identified as 24-year-old Mohammad Moiz Omar, and brought him to the ground. A hatchet Omar was carrying in his other hand was thrown aside before he could hurt anyone. 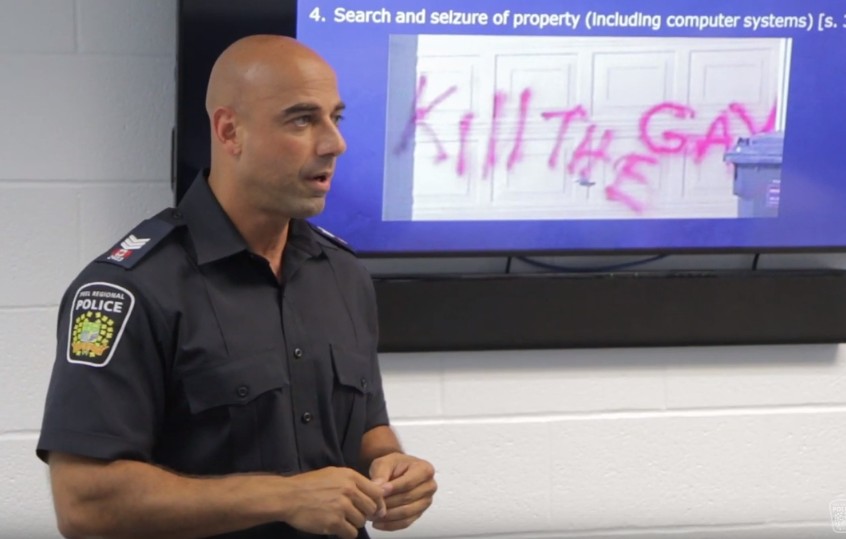 Peel Police Detective Feras Ismail says that even though the region consistently sees hate-motivated incidents, each case needs to be viewed individually to understand the specific motive.

The air was thick with toxic fumes, identified as bear spray after the incident. Similar to pepper spray, bear spray is made with oleoresin capsicum, an active ingredient derived from cayenne pepper. When ingested it can cause severe burning/swelling of the nose, eyes and restricts breathing. Pepper sprays used on humans have about 1 million scoville heat units (SHU), bear spray has closer to 3 million SHU.

The men who subdued Omar dragged him out of the Mosque to a front carpeted area and kept him on the ground until Peel Regional Police arrived. Sairally was given a laptop bag taken from Omar, inside he found ropes, knives, another axe and a pair of goggles.

“The only thing that he didn’t do when he walked in—I'm not sure if it was because he was in a haste of doing harm to us—he didn't even have protection for himself when he was spraying, so it got into his eyes also."

While Omar was on the ground, Sairally said the men holding him asked questions, but he did not answer and kept his eyes closed.

Police took Omar into custody and later charged him with assault with a weapon, administering noxious substance with intent to endanger life or cause bodily harm, possession of a weapon for a dangerous purpose, utter threat to cause death or bodily harm, carrying concealed weapon and mischief to religious property.

Police said in the press release published when the charges were laid on Saturday that the attack “is believed to be a hate-motivated incident”, different from a hate-motivated crime, which is a criminal act that can lead to a separate criminal charge.

No hate-motivated or bias-motivated charges have yet been laid, as such a decision is often only made after a detailed investigation and consultation with local Crown Attorneys after handing the file to them.

With the diversity of Mississauga and Brampton comes an often complex array of circumstances Peel police have to consider when investigating cases. The force goes to great lengths to communicate to the public the process when dealing with incidents such as the one that took place inside Al-Tawheed Islamic Centre Saturday.

These are different from a Hate-Motivated or Bias-Motivated criminal charge.

Peel Police highlights two sets of circumstances that must be present for one of these two charges to be brought forward: “A criminal offence must have occurred (e.g. an assault, damage to property, uttering threats etc.); Hate or Bias toward a victim must have motivated the criminal offence (e.g. because of the victim's race, nationality, ethnic origin, language, colour, religion, sex, age, mental or physical disability, sexual orientation etc.).”

The case currently being investigated could involve any combination of the following circumstances (there has been no suggestion by police that any of these factors are involved in the case) or none of the following: Omar could have been suffering a mental health crisis; he could have known an individual or individuals who frequent the Mosque; he could have targeted the Mosque due to a personal belief; other medical issues could have been a factor; he could have experienced a specific issue at the Mosque; or it could factor in a conflict (religious, political, personal, philosophical etc.) that Omar has experienced for a prolonged period.

Little has been said about the suspect since his arrest including any sort of history with violence or mental health issues.

The doors to the Islamic Centre are kept open allowing people to come in and out of the Mosque as they please. Sairally told The Pointer, Omar entred the room quietly, it wasn’t until the canister made noises that his presence was noticed.

Detective Feras Ismail who worked extensively in Peel Police’s diversity and equity office but now is in the force’s training bureau spoke with The Pointer generally about the complexities of investigating such cases and avoiding a rush to draw conclusions without any evidence.

When police investigate such incidents, the history of the accused, possible motives and dynamics around the mental health of the individual are investigated extensively. While he could not speak to the specific case, Detective Ismail did say, “we need to look at it individually, case by case and be careful not to overgeneralize.”

Even if police believe it was a hate-motivated incident, it does not exclude other factors that might have been at play.

“The reason for people's bias and ignorance and what motivates people in the context of hate; there's obviously sometimes various compounding factors. Sometimes it's their beliefs, some of the ideologies that are driven into them, either at a young age or through social circles or through media or through their parents,” Ismail explained. “It could be a variety of things, maybe some of their personal experiences with people that they believe represent a specific faith and maybe an inability to kind of better understand what that really means because of some potential existing mental health issues.”

Ismail said numerous factors need to be considered and investigated before police can make a decision on the motive.

“This is somewhat of an isolated incident [in Peel]… . Maybe once we understand a little bit more about this investigation and more information comes to light, maybe we can also find out ways to better mitigate it,” Ismail said. “If it does come to light that there were mental health issues, then again, it's time for us to refocus and kind of re-emphasize our organizational commitment to a more prosocial mental health model of community support. If not, then we need to understand what it is that drove this, what brought it to this point, and what we can do to help mitigate that with the community.”

Regardless of the evidence that emerges in the case now being investigated, and the reality that will be pieced together, advocates in diverse Muslim communities have recently demanded more action to address the increase in incidents involving their members.

“We need to move beyond condemnation, and supportive sentiments, and photo-ops,” Rabia Khedr, board member and spokesperson for the Muslim Council of Peel, previously told The Pointer.

After the attack, her organization put out a press release. “As the investigation unfolds, and until we have the correct information at hand, we should avoid speculations and creating or adding to rumours that divide the community itself,” it stated.

It also highlighted Peel police’s work to ensure Mosques in the area are being closely monitored to keep congregants safe.

Detective Ismail talked about the challenges and benefits of life in Peel, home to a melting pot of religions and cultures, where many residents are exposed on a daily basis to people from all backgrounds. To him this is a strength because it allows communities to understand one another and see through the false narratives spread throughout our society.

“As a community, to be able to better dispel some of the rhetoric and the propaganda that is unfortunately available through online media, movies, and just kind of misinformation. I think that that actually serves internally as being a deterrent to these types of things,” he said.

This can be particularly difficult when so-called leaders push forward dangerous narratives and stereotypes aimed to isolate and divide certain groups.

“Not long ago, we had world leaders that were pushing out tweets on their social media that can be construed as somewhat racist, these are people that ultimately we looked at—the leaders of countries—and we have to realize that we live within a socio-political climate where, unfortunately, that type of behaviour is by virtue of those individuals not being held truly accountable. What we are doing is we're normalizing that and we're empowering other people to do the same.”

Saturday’s attack came at a particularly sensitive time for Muslims who are getting ready for a month of observing and celebrating Ramadan. Sairally has been back to the scene everyday since Saturday vowing to not let the incident keep him from his place of worship.

Volunteers and coworkers have started conversations about increasing security at the Mosque to show people it will be safe to attend. The last thing the centre wants is for the community to feel like they need to look over their shoulders while attending prayer sessions. 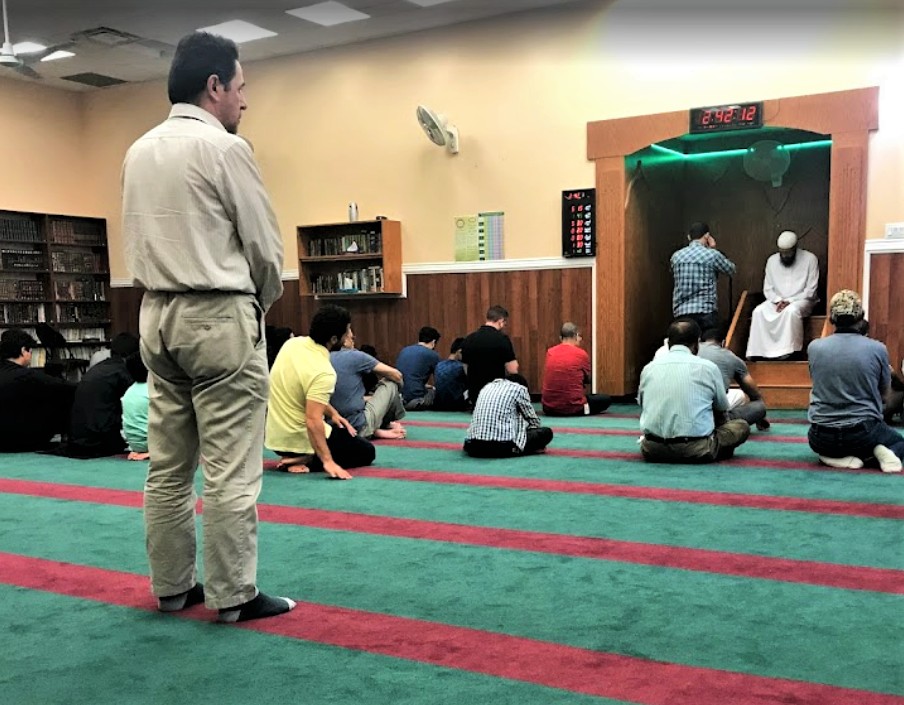 “We want to make sure that they have that tranquility, that ease, so that they can concentrate on the prayer rather than the mind going around,” he said.

After the incident, Sairally made his way back home trying to process what happened. He was met by his wife and their five children. His youngest is 10-years-old, the eldest 24. It was important for him to be honest with his family and explain the gravity of what he experienced firsthand.

“I made them understand that, given the situation, it's going to affect me, and it's going to maybe put me in a different type of mindset,” he said. “So I asked them [to] be patient, and be supportive.”

Sunday morning after the attack, Sairally said he was still feeling “shaky” from the incident, and he wasn’t the only one. Speaking with others at the Sunday morning prayer many said they were shaken.

“I know people who come regularly to the Mosque, and I know they're not in the best state of mind right now,” he said. “I was fortunate to speak to them, [and] you can see in the eyes, there’s something.”

One of the men he spoke to after the attack said his son had been acting paranoid since, double checking doors to make sure they were always locked.

“We just try to kind of make sense of what happened. We'll continue to go because this act will motivate us to be at the Mosque. We're not going to be scared because of this.”