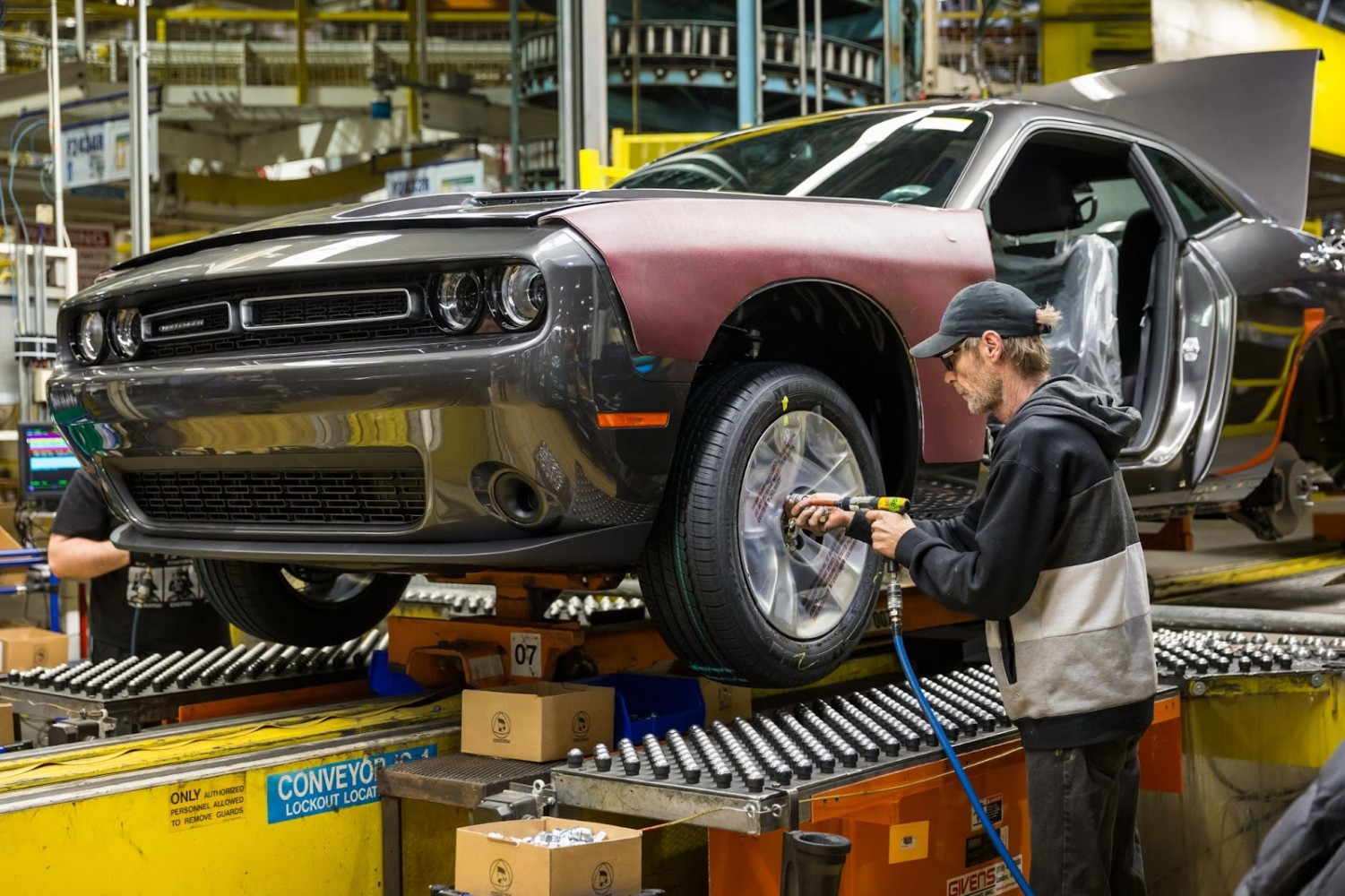 Autoworkers in Brampton are left in the dark, searching for clues in news items and press releases. Local councillors try to read between the lines of provincial announcements and City staff call contacts, desperate for any sign of what the future holds for one of Brampton’s top employers.

Next year, the deal between unionized workers and Stellantis, one of Brampton’s largest skilled employers, expires. That means 3,163 workers at the Williams Parkway Fiat/Chrysler assembly plant do not know what their future holds. A much-rumoured merger was completed in January 2021, putting the Brampton Chrysler plant under the umbrella of Stellantis, a large auto conglomerate that includes Chrysler, Dodge, Jeep, Ram, Fiat, Alfa Romeo, Lancia, Maserati, Citroën, DS, Opel, Peugeot and Vauxhall.

The massive Brampton plant has a contract to assemble three gas-powered Chrysler cars until the end of 2023, a deal that has not yet been extended or replaced with a new plan. The massive Brampton facility spreads across 269 acres and is viewed by the City of Brampton as a key employer.

“Our main role right now is to really put a spotlight on the fact that we do not have a mandate past 2023 for that plant,” Clare Barnett, director of economic development and culture, told The Pointer. “There are so many jobs that are dependent on that.”

Barnett outlined a series of advocacy moves that are taking place. Mayor Patrick Brown and Councillor Martin Medeiros will be sent to Windsor and Detroit to “knock on the door of the company” and raise Brampton’s concerns.

While there is a strong desire to see Brampton transition to the battery-electric cars of the future, City staff say there is still demand to buy gas-powered cars. Sales of the models assembled in Brampton stalled during the COVID-19 pandemic, but did not disappear completely. 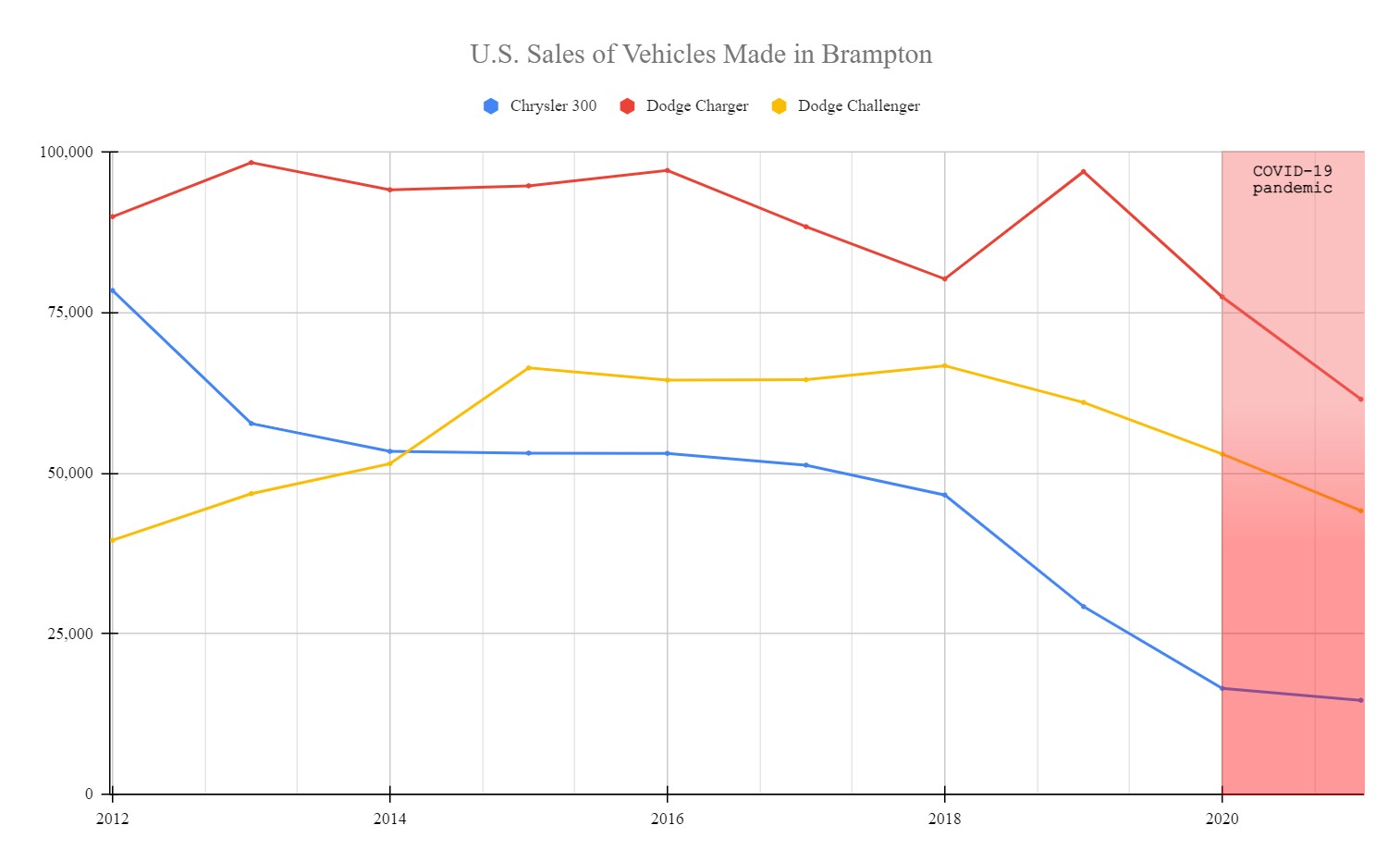 Sales of the vehicles manufactured in Brampton dipped during the pandemic.

“There won’t be enough electric vehicles produced in the next few years to meet market demand and that demand is still being figured out,” said Daryl Van Moorsel, sector manager of advanced manufacturing for the City of Brampton. “So there is still a role for the industrial combustion engine … in the next few years.”

In a situation Brampton admits is its worst-case scenario, the land would still be sold for advanced manufacturing. That could include a plant specializing in batteries.

“We are having those conversations … we hope it doesn’t come to that,” Barnett said. “For us, it’s [the] worst-case scenario: let’s see what we could do with that plant and with that workforce. And we would promote that internationally if it became available. There would be site selectors that would be very interested in hearing about that land.”

Stellantis, the parent company responsible for running the plant, has stayed silent among the speculation and lobbying efforts. On November 17, a business meeting between the union (Unifor) and Stellantis produced positive signals, but no firm promises.

“Mark Stewart [Chief Operating Officer] reiterated the company’s commitment to the Brampton Assembly Plant,” a briefing on the Unifor Local 1285 website explains. “On behalf of the corporation, he praised our members, highlighting the amazing quality and how we continuously achieve our daily build. He was elated with the amazing products our plant continues to provide for the customer.”

A few months later, Carlos Tavares, the Stellantis CEO, visited the Brampton plant, his first trip to Brampton since the 2021 merger was completed. Again, the company came empty-handed but “the tone of the meeting was positive,” according to the union. 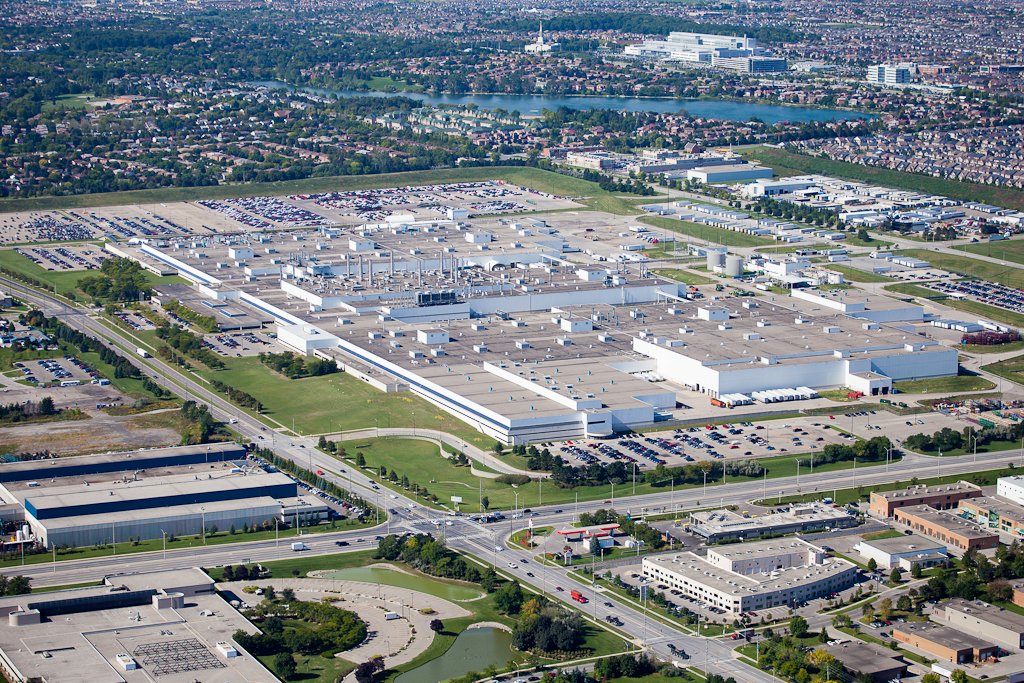 An overhead view shows the expansive size of the Brampton assembly plant.

Other announcements from the company have triggered hopeful speculation around the future of the Brampton assembly. A January announcement from Stellantis and Amazon confirmed the e-commerce giant would be the first customer for a new range of electric Ram ProMaster delivery vans to green its fleet. The announcement was one of many that raised questions; could the new line be assembled in Brampton?

“At present, the Company has not announced the production location of the Ram ProMaster EV,” Bradley Horn, product communications for Stellantis in Canada, told The Pointer.

The plant has been at the Brampton site since the 1980s – built by American Motors (AMC), then purchased by Chrysler. Much of its assembly infrastructure dates back to 2005.

Brampton will continue to make its three Chrysler products until the end of 2023. If there is a plan for what comes next, it has not been communicated to the workshop floor.

Any closure would have major consequences for Peel and the GTA. Alongside the 3,000-plus jobs in the plant itself, a range of companies and workers are tied up in the supply chains of Chrysler and Stellantis.

“You would think that there’s a prime opportunity for Brampton to be part of that shift, start producing electric vehicles right here in the city,” Councillor Medeiros told The Pointer.

Brampton says it has limited resources to convince Stellantis. Staff have taken small steps to make the car company’s operations easier, like changes to the programming of traffic lights around the assembly plant to speed up deliveries, but the City does not have the capacity to put forward any significant financial incentives.

“The kind of funding that projects like this will require really comes from the federal government and the provincial government working to provide that to the companies,” Barnett said.

Other levels of government have shown an increasing urgency in transitioning Canada to produce electric cars. Ontario Premier Doug Ford and Canadian Prime Minister Justin Trudeau have made promises to help companies retool, including hundreds of millions of dollars to help Ford Motors Canada transition its Oakville assembly line into a hub for battery-electric cars. However, Ford's commitment to increasing the presence of EVs in Ontario remains uncertain after cancelling a subsidy for residents purchasing EVs almost immediately after being elected. The move caused sales of the greener vehicles in Ontario to plummet.

In a December interview with Automotive News Canada, Ford accused Stellantis of stalling on Brampton’s future. He said he felt he was getting “mixed messages” from the company and told executives he did not want them to sell the plant for residential redevelopment.

“I just want someone to be honest,” he said. “If you need help, tell us, we’ll be there to support you. They’ve got to give me the straight goods here.”

As the City continues its advocacy campaign, Medeiros says the ultimate responsibility rests with other levels of government.

“I wouldn’t say that the ask is exclusive to Brampton because I would make the argument that MPPs and MPs should have the exact same concerns as we do, in fact, even more so because a lot of tools that can be used from the toolbox are really provincial, federal instruments,” he said. “So politically I would actually pass the baton on.”