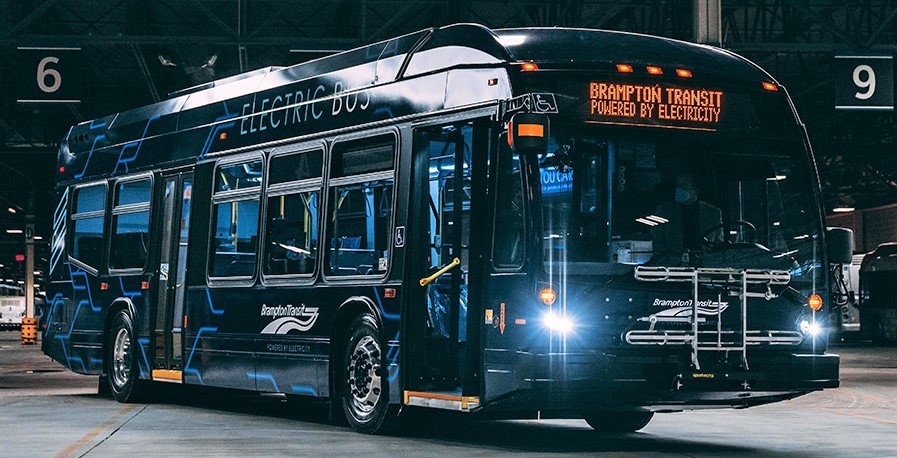 It’s official, the City of Brampton will have access to $400 million in financing between now and 2027 to help carry out the vital task of transitioning its public transit fleet from diesel to electric or other zero-emission buses (ZEB).

The agreement with the Canada Infrastructure Bank (CIB), a federal crown corporation, was announced last year with much fanfare in a city that, prior to the COVID-19 pandemic, was seeing significant increases in public transit usage.

Under the CIB’s Zero-Emission Buses Initiative, the agency aims to help municipalities and school boards across the country shift to environmentally friendly vehicles by offering direct loans that can cover the higher upfront capital cost of ZEBs and charging infrastructure versus diesel buses, a media release states. For example, the CIB states that with an electric bus costing approximately $1.3 million—compared to $700,000 for a diesel bus—the loan can be used to cover the $600,000 difference.

The up to $400 million in support will give Brampton the ability to borrow the price difference between diesel and electric buses at an interest rate of one percent. Brampton will have a repayment term of 15-years for each round of investment by CIB.

The loan is paid back though fuel savings from the transition.

With current fuel prices at upwards of 183.7 cents a litre, the 10 electric buses Brampton is looking to replace in 2022 could provide a small ounce of relief for a transit budget that has been strained by lost of revenue during the COVID-19 pandemic.

A City spokesperson told The Pointer that Brampton is only adding 10 ZEBs because that is the maximum number of electric buses that can be charged with existing charging infrastructure.

The CIB loan could help put 450 zero emission buses onto the streets of Brampton between now and 2027.

Brampton Transit staff anticipate that the majority of buses deployed over the next five years will be battery electric buses, not FCEBs.

The quieter and more comfortable ZEBs have lower maintenance costs, and could help Brampton fulfill its promise to reduce its greenhouse gas emissions by 80 percent by 2050.

The deployment of these 450 buses in Brampton will prevent approximately 57,000 tonnes of greenhouse gases from entering the atmosphere per year. Brampton Transit welcomed its first electric bus in 2021 and its current fleet includes eight battery electric buses and four overhead chargers saving approximately 235 tonnes of CO2 per bus per year, a 2021 media release says.

Brampton councillors have been sending mixed signals about their commitment to combating the climate crisis since they declared a climate emergency in 2019. Little progress has been made on the City’s environmental master plan and most recently councillors refused to reopen debate around the environmentally destructive Highway 413 early this year.

With the CIB contributing the extra dollars required for the City to green its fleet, Brampton is looking to purchase 450 new ZEBs by the end of 2027. It remains unclear how the city will be able to pay their share.

The deal significantly reduces the risk on City Hall as the loan is repayable only through cost savings during the lifespan of each bus, not from Brampton’s operating budget.

“If the deemed (actual) savings are not sufficient to fully repay the credit facility with interest, and Brampton Transit has done what is practical to minimize costs/maximize vehicle reliability, then the City is only required to pay back what has actually been saved. The shortfall will be absorbed by the CIB,” the staff report states.

In the highly unlikely scenario, Brampton saves more over the 15-year term and fully pays the principal amount and interest, any excess savings will remain with the city.

“This risk sharing between CIB and the City is a unique risk mitigation feature that would not be available under a traditional loan arrangement,” the City report states.

Without the CIB financing arrangement, “…the City has no other obvious comparably priced source of financing at this time other than higher cost debt financing or potential federal/provincial infrastructure programs,” the staff report states.

The budget also lists $3.75 million each for 2022 and 2023, for constructing electric vehicle charging stations. Despite the assurance the CIB loan brings, the path to paying for the full 450 ZEB complement remains uncertain.

In 2020, the City bought 28 diesel and hybrid buses to expand its fleet. If it is to take full advantage of the loan by 2027, Brampton would have to budget for an average of 75 new buses each year.

Following four consecutive tax freezes under Mayor Patrick Brown, City reserves have taken a beating and little forward-thinking investments have been made to better position Brampton to fund things like new transit projects or the charging infrastructure required for new ZEBs.

Unless the City prioritizes funding for ZEBs in future budgets, Brampton won’t be able to access the CIB funding.

Brampton is already looking for help with transit infrastructure investments, asking the federal government for $75 million to support the electrification of its third transit and maintenance facility—funding for the facility was delayed in the 2020 budget in order to achieve a tax freeze, despite the clear signs from Brampton Transit that its existing facilities were approaching what one report labelled as “crush capacity”.

Along with the CIB loan, Brampton has applied for funding to grow its existing bus fleet through the Investing In Canada Infrastructure Plan (ICIP), as The Pointer earlier reported.

The federal government’s website states a decision on the request has been made but provides no further details.

The staff report mentions Brampton Transit staff is working with external experts on charging infrastructure, but it does not say if any funding from CIB would go towards electrification of Brampton’s third transit garage.

“City staff have had preliminary discussions with Ontario Power Generation (PowerON) regarding potential future partnership opportunities. The City has sought input from Alectra Utilities regarding electrical utility needs for the electrification of the New Third Transit Facility,” City staff state.

The City’s master planning process originally called for two bus garages: one in 2021, another in 2028 which was cancelled by the city council in 2019 who changed gears in an attempt to build one large facility—North-America’s largest—in 2024. The decisions delayed the installation of much needed charging stations in Brampton.

To keep these ZEBs running Brampton has two options: the more affordable, but slower, in-depot charging stations or the faster-charging, but costlier on-street chargers.

“Brampton will soon be engaging a consultant to complete a ZEB Implementation Strategy and Rollout Plan. This strategy will look at, among many other things, the most efficient and appropriate distribution between in-depot and on-street charging,” City staff told The Pointer.

Staff are working closely with Infrastructure Canada (INFC), under the Zero Emission Transit Fund (ZETF) to submit funding applications for the charging infrastructure required to support the full fleet transition to ZEBs.