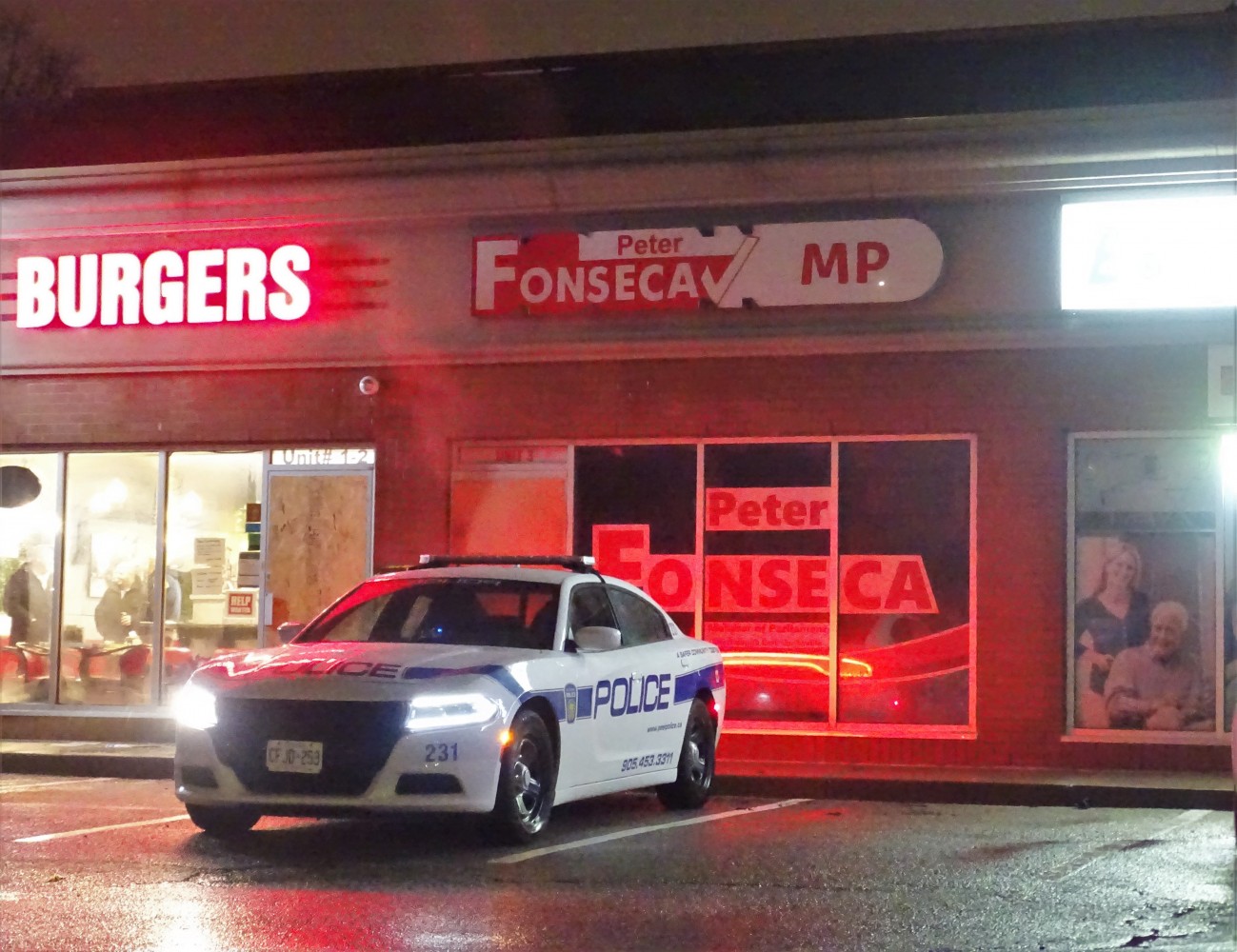 In the early hours of Tuesday morning, the constituency office of MP Peter Fonseca, the Liberal representative for Mississauga East-Cooksville, was set on fire. The blaze occurred only hours after Fonseca took part in a controversial vote in Ottawa to support the usage of the Emergencies Act to continue pushing back against protests in the nation’s capital. It remains unclear whether the two incidents are connected.

At approximately 4:17 a.m. Mississauga Fire and Emergency Services (MFES) received a call from a bystander that a unit at 980 Burnhamthorpe Road East was on fire.

MFES dispatched 24 firefighters to the scene and arrived to see the unit in the centre block of the plaza in flames. Crews described the fire as visible from outside the unit, but were quickly able to enter the front door and extinguish it from the inside.

Police were called to the scene at 4:19 a.m. to investigate. No injuries were reported. Peel Regional Police (PRP) have deemed the fire as “suspicious.” Investigators from the 12 Division Criminal Investigation Bureau and the Office of the Ontario Fire Marshall are investigating.

According to CityNews, police believe an incendiary device was thrown through the front door of the office and a security camera above the door was spray-painted over. PRP would not confirm these details to The Pointer.

A media spokesperson from PRP confirmed investigators believe the incident was “targeted.”

The Pointer reached out to Fonseca’s office for comment on the incident, but did not receive an answer.

In a statement provided to CityNews, Fonseca says the incident “is extremely disconcerting and has shaken his staff.”

His wife and local Mississauga Councillor for Ward 3 Chris Fonseca commented on the situation at City Council Wednesday morning.

“This is absolutely not acceptable, to break in and set fire to a community constituency office and location where local businesses are trying to thrive and support the local community is just not acceptable,” she said. “It is a threat to our safety, to all of us as a city that have worked so hard through the pandemic, and to this point, to support the safety, health and wellbeing of residents in business and in the community.”

Chris Fonseca told council her husband is looking for support from the federal government to deal with the disturbance.

Prior to the fire, at around 8:30 p.m. on Monday, Fonseca took part in a historic vote in Ottawa to confirm the usage of the Emergencies Act to end the ongoing blocades occurring at the foot of Parliament Hill. The move marks the first time the Act has been used since it replaced the War Measures Act in the 1980s.

The vote, which approves measures invoked a week ago, passed successfully 185 to 151, and allows the federal government and police to deploy extraneous tools, like freezing bank accounts or overriding provincial jurisdiction to dislodge protesters from the streets of Ottawa. 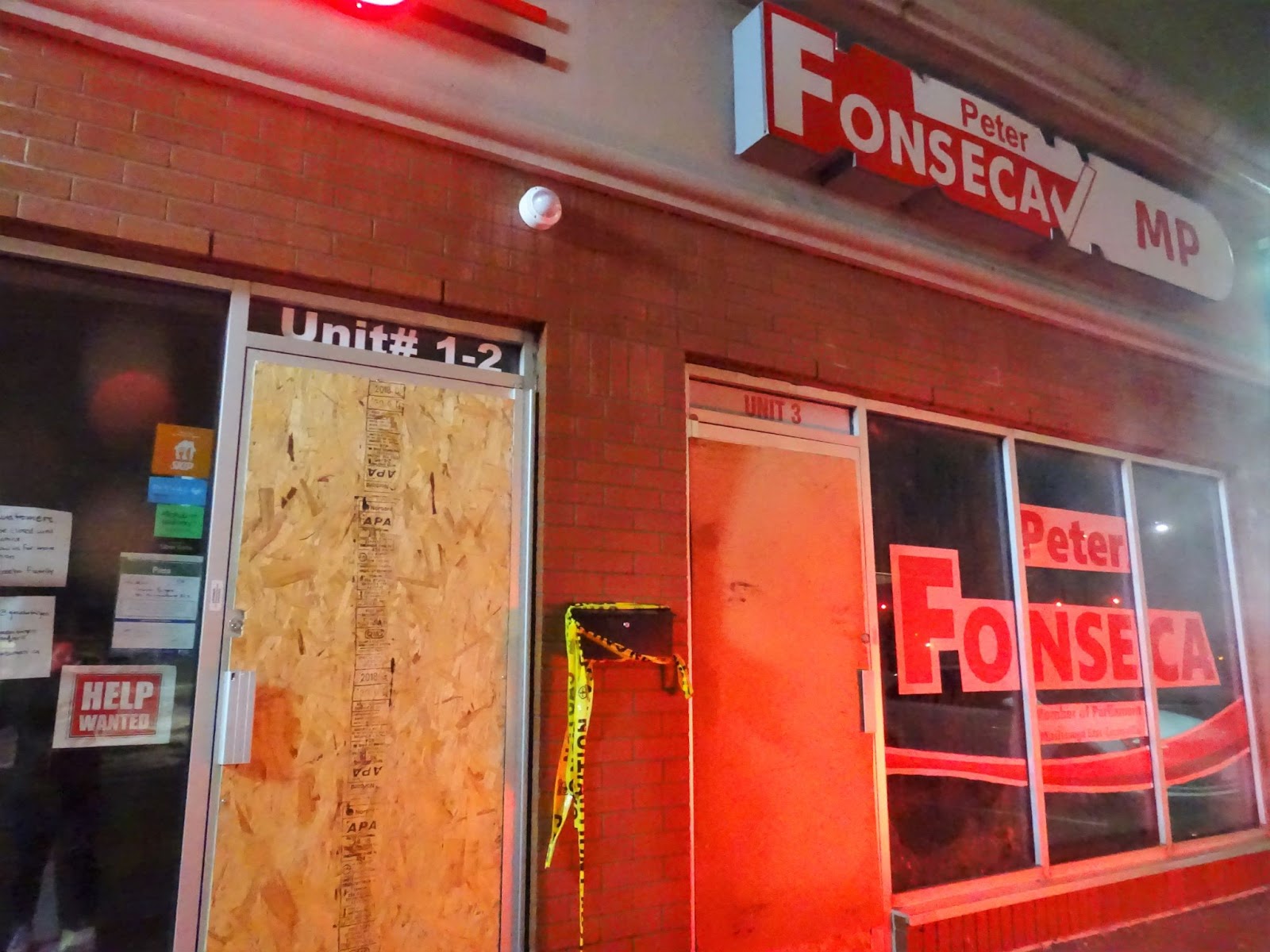 The structure is still standing, with no visible damage to the outside or the inside of the unit next to Peter Fonseca’s office.

“The Emergencies Act can be invoked to grant temporary additional and necessary powers to the federal government when provincial, territorial and federal tools are no longer sufficient to deal effectively with the serious issues being faced, such as the ability to make orders or regulations that are believed, on reasonable grounds, to be necessary to respond to the issues at hand,” the Government of Canada website reads. The Act has since been used to freeze the bank accounts of those involved in the protests, or who provided donations to the Freedom Convoy, with some reports stating up to $7.8 million in funds had been frozen by officials. According to the RCMP, work is underway with financial institutions to unfreeze most of these assets as of Wednesday.

Since the weekend of January 28, thousands of semi trucks and other vehicles, along with drivers and supporters, have occupied a large portion of downtown Ottawa.

In Ottawa at the time, a reporter for The Pointer observed a long line of trucks entering the nation’s capital. The stampede of vehicles adorned with Canadian flags had their horns blaring. Supporters amassed at overpasses urging drivers to honk louder and longer as they traversed across usually quiet suburban neighbourhoods.

Dubbed the “Freedom Convoy” by its organizers, the protest rolled into Ottawa on Saturday, January 29 and refused to leave. It was initially organized to protest vaccine mandates for truckers crossing between Canada and the United States, but quickly morphed into protests of COVID-19 public health restrictions and the handling of the pandemic by Prime Minister Justin Trudeau and his Liberal government.

Throughout the first weekend of the protest, thousands gathered on the lawn of Parliament Hill. Trucks idled in the streets throughout the day and night, constantly blaring horns and disrupting the lives of Centretown residents.

Ottawa Police reported the masses were largely peaceful with no incidents. However, there were reports of hateful messages shouted at passersby and the appearance of swastika flags, Confederate flags and the Canadian flag being flown upside down. It has also been reported that key organizers behind the convoy hold racist or white-nationalist views and are supporters of various conspiracy theories. 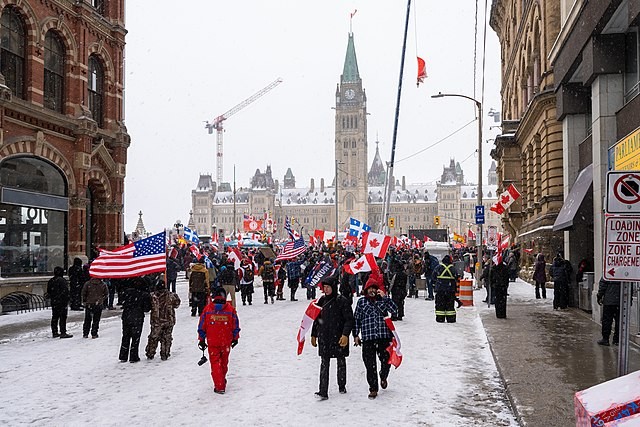 The Shepherds of Good Hope, an Ottawa homeless shelter, said some of their staff were harassed by protesters demanding food. The organization also said at least one staff member was assaulted in the altercation.

On Monday, the Liberals put forward a motion to continue employing the Emergencies Act, despite the fact that the majority of the trucks and encampments had been cleared from the streets of downtown Ottawa by Sunday morning, and border blockades set up between Canada and the U.S. had been cleared. The Liberals insisted the continued usage of the Act was necessary in order to avoid any resurgence of the blockades as protestors still remained in the Ottawa area.

Fonseca was one of the 184 MPs in favour of confirming the Act’s continued use. Hours after he cast his vote, his Mississauga office was in flames.

The Pointer reached out to the other Liberal MPs who hold seats in Mississauga to check if they’ve also received threats. They did not respond in time of publication.

The incident caused a unit next door, Gazebo Burgers and Grill, to shut its doors as well. Late Tuesday evening, two PRP officers were stationed at the two entrances of the plaza. The door to Fonseca’s office is boarded up and the windows are covered. There are no visible signs of damage to the structure and the wall connecting the office and restaurant is still visibly intact.