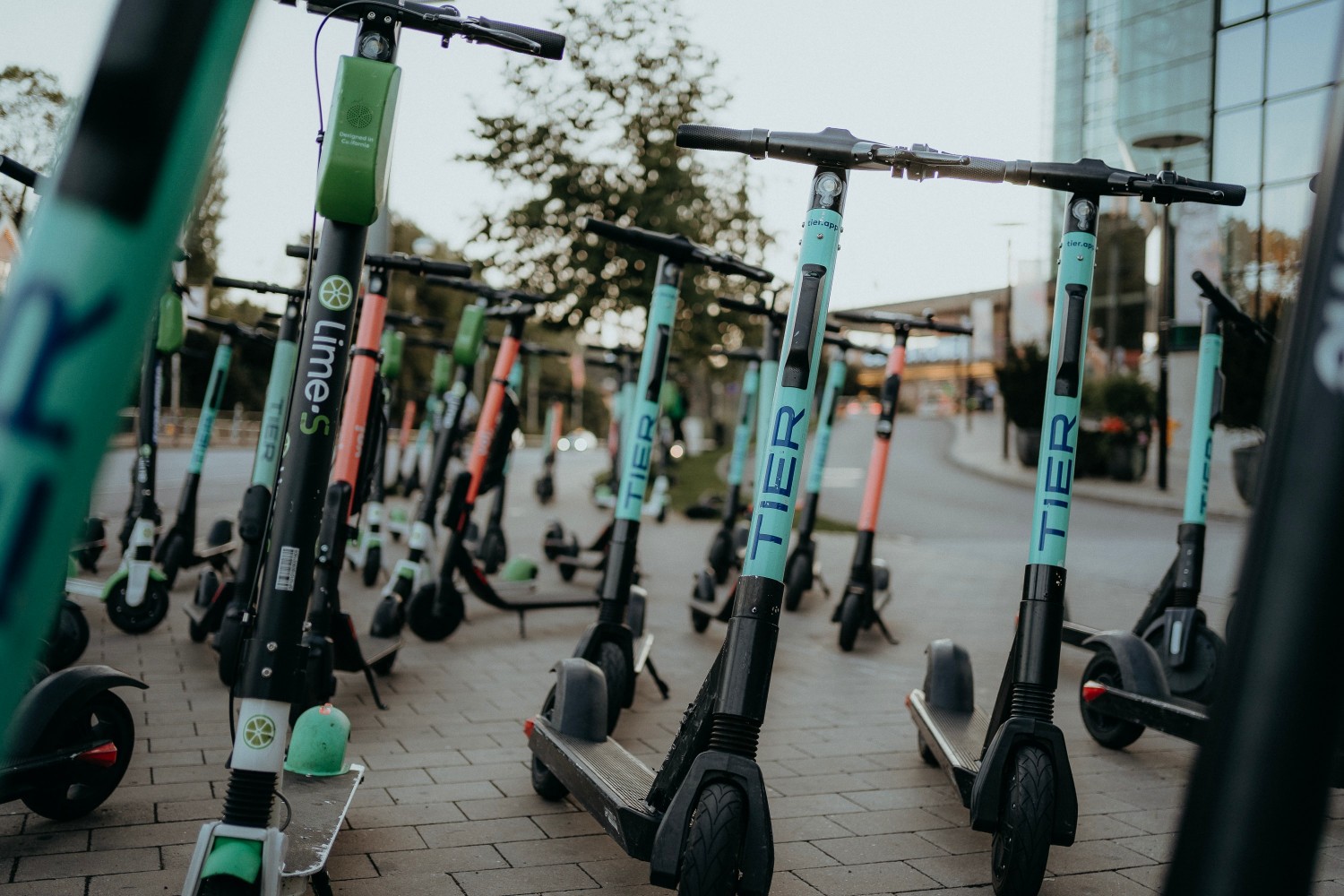 Brampton, with its gaping boulevards and suburban-style planning built around the car, does not seem like an ideal setting for the use of commuter e-scooters. But it’s set to be the first GTA municipality to authorize rentals of the increasingly popular electrified two-wheelers, under a pilot program.

The move raises a range of questions about safety and regulation and leaves council open to significant backlash from accessibility advocates.

The viability of the idea, in a bedroom community that lacks cycling infrastructure, required density, local employment options and a culture that supports active transportation, is another concern.

Nonetheless, at Wednesday's Committee of Council meeting, Brampton council members unanimously directed staff to begin the process of introducing e-scooters through a pilot program, after pitches from companies pushing the idea to generate revenues for themselves. Brampton will now offer e-scooter rental providers the chance to become one of three companies that will operate in the city.

The two-year pilot program will involve 250 to 500 scooters per company, for a maximum of 1,500 between the three companies, which will agree to the areas of the city in which each will operate.

The decision will not be official until it is ratified at next week’s full council meeting.

The provisional approval was celebrated Wednesday by representatives of e-scooter companies and council. In theory, the micro mobility devices offer an alternative to driving for short trips and a route toward reducing emissions in the city.

“Every city has GHG emission targets and a larger goal to reduce vehicle traffic,” Stewart Lyons, CEO of Bird Canada, told councillors. “In my opinion, there's nothing that is quite as quick and as substantial in terms of decreasing vehicle traffic than a scooter programme. Particularly given the amount of investment a city has to invest in it, which is fairly minimal.”

A range of companies across the world have spent years extolling the benefits of these devices. Asian cities, such as Bangkok and Singapore (a city-state) offer examples of the popularity of e-scooters, but also provide a cautionary warning.

Tokyo police began cracking down on their use last year, after 39 accidents that caused injury in a six-month period. 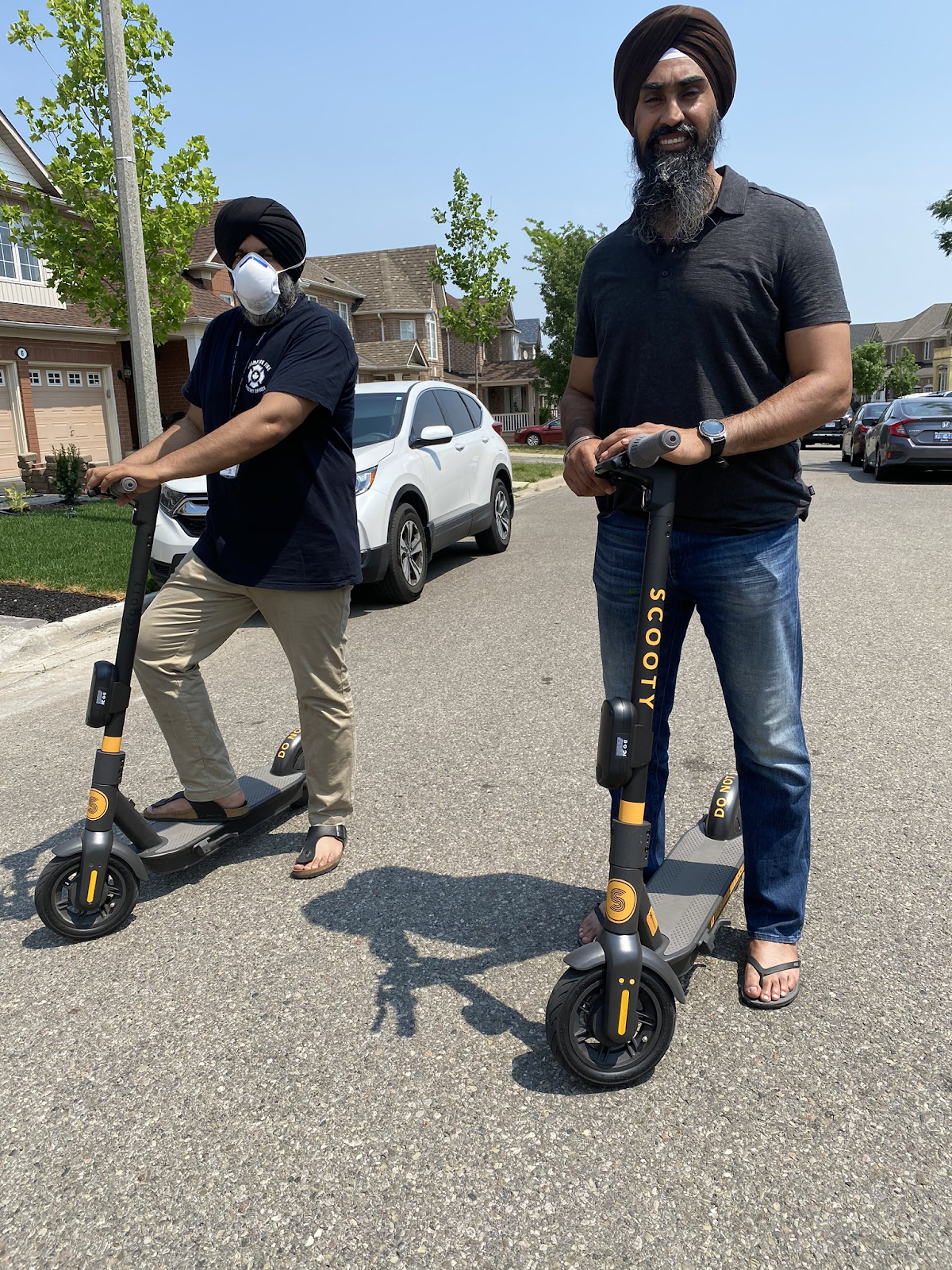 The potential introduction of e-scooters to Brampton is now raising concerns.

Drivers in the city, where auto insurance rates are among the highest in Canada, already contend with rush hour congestion and high speeds, which could worsen by residents zipping around on scooters.

“This is all a fog of unenforceability,” David Lepofsky, a leading lawyer and advocate for people with disabilities, told The Pointer. Lepofsky fought relentlessly and successfully against the introduction of e-scooters in Toronto due to concerns that those with particular disabilities would face another obstacle when trying to use city streets and sidewalks safely. He said he was frustrated that Brampton staff had not canvassed him or his organization, the Accessibility for Ontarians with Disabilities Act Alliance, to hear concerns.

“We are publicly visible, audibly public on this issue,” he said. “So they have no excuse for reaching this, other than simply giving in to the corporate lobbyists and so on and failing to consider our concerns.”

Safety concerns from advocates have been wide ranging. The disability advisory committees for Toronto, Mississauga and London all recommended against introducing scooters to their cities’ streets. Some councils, like Toronto, listened to disability advocates, others, including Ottawa, have not.

A study of e-scooters in Sweden highlights Lepofsky’s concerns. Research funded by the Swedish Transport Administration found that 13 percent of e-scooter-related accidents resulted in another road user being injured after interacting with a moving or parked e-scooter. It means that more than one in ten e-scooter injuries are to people who have made no active decision to ride one of the devices. 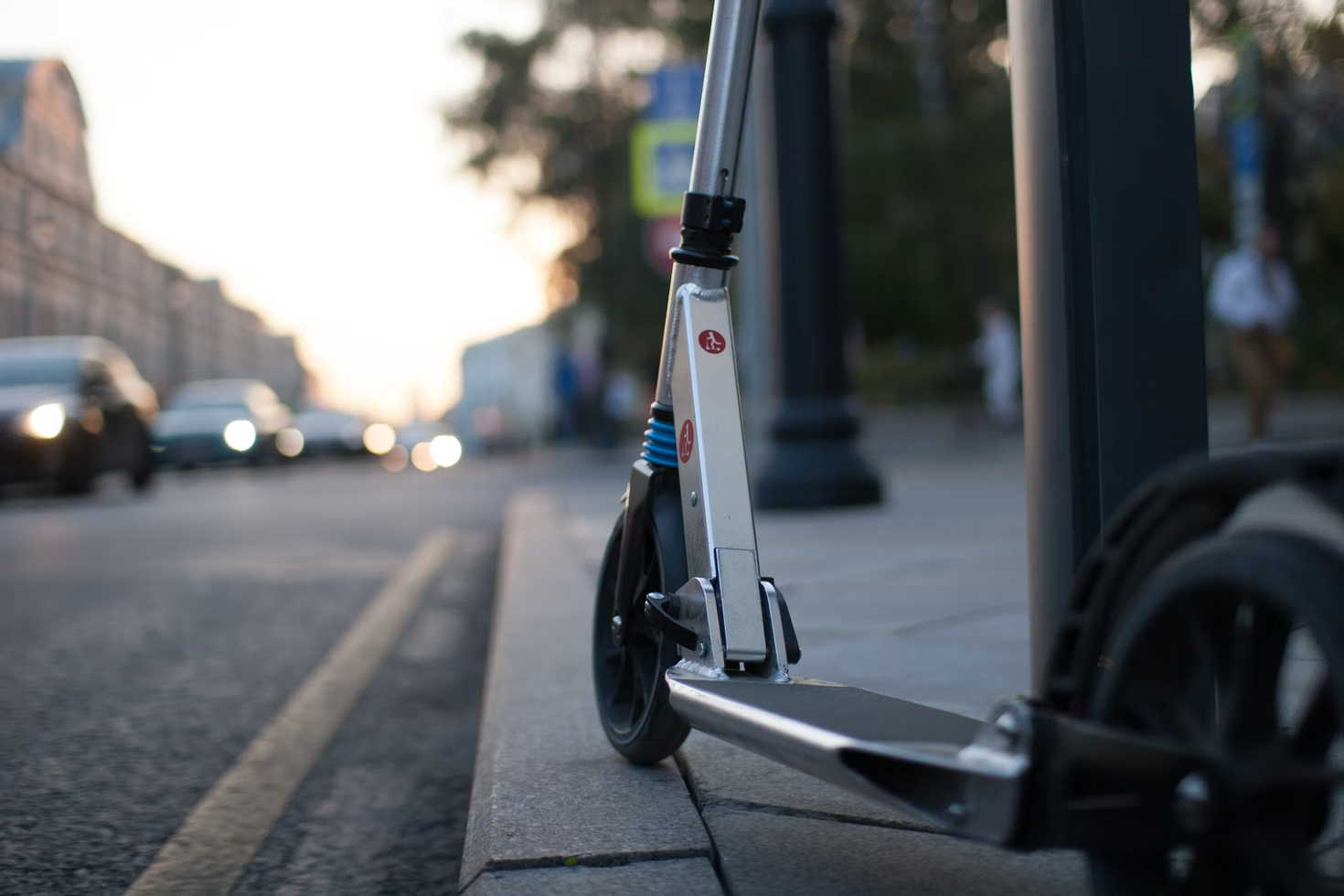 There can be safety risks associated with e-scooters, especially on streets not designed for modes of transportation other than the car.

There is limited data on investigations into the safety risks associated with e-scooters. Many cities in North America are still operating pilots and have only recently introduced the devices to their streets. Ontario itself is in a five-year pilot period for municipalities to test and regulate e-scooters that began in 2019.

Figures from the National Electronic Injury Surveillance System, assembled and analyzed by academics at the University of California, registered a 354 percent rise of e-scooter-related injuries in United States adults between 2014 and 2018 (the figure should be placed into context, as take-up of the products increased significantly over this period). The research noted almost one third of injuries involved riders with a head injury.

“Despite being unable to account for ridership exposure, the nearly doubling of incident e-scooter trauma calls for improved rider safety measures and regulation,” the study advised.

Brampton’s draft plan goes in the opposite direction, leaving the vast majority of decisions in the hands of private companies.

This could leave the City vulnerable to potential legal action.

Staff have recommended the City allow three private companies to operate and manage the day-to-day regulation of e-scooters on its streets. The process will invite companies to operate under two-year agreements, with each company choosing their own service area within the city. It’s unclear how this would be decided, as some corridors would be much more lucrative than others. E-scooters will operate on roads with speeds below 60 kilometres per hour, bike lanes, multi-use paths and recreation trails.

Currently, Brampton has hardly any on-street bike lanes, raising questions of how viable the scooter plan is. With about 11 kilometres of on-street bike lanes, mostly in and around residential subdivisions (two temporary bike-lane routes were also created during the pandemic to give residents more options to get outside) it raises questions about how elected officials could support the use of e-scooters while continuing to ignore the need for active transportation infrastructure.

Mississauga has initiated a plan to add 56 kilometres of bike lanes to the 51 kilometres it has previously maintained. That would be about ten times the length that Brampton has.

Toronto had 587 kilometres of on-street bike lanes before it launched its plan prior to the pandemic to add more than 500 additional kilometres of bike lanes. Brampton has one percent of this total, and Toronto is often criticized by active transportation advocates for its lack of on-street cycling infrastructure. 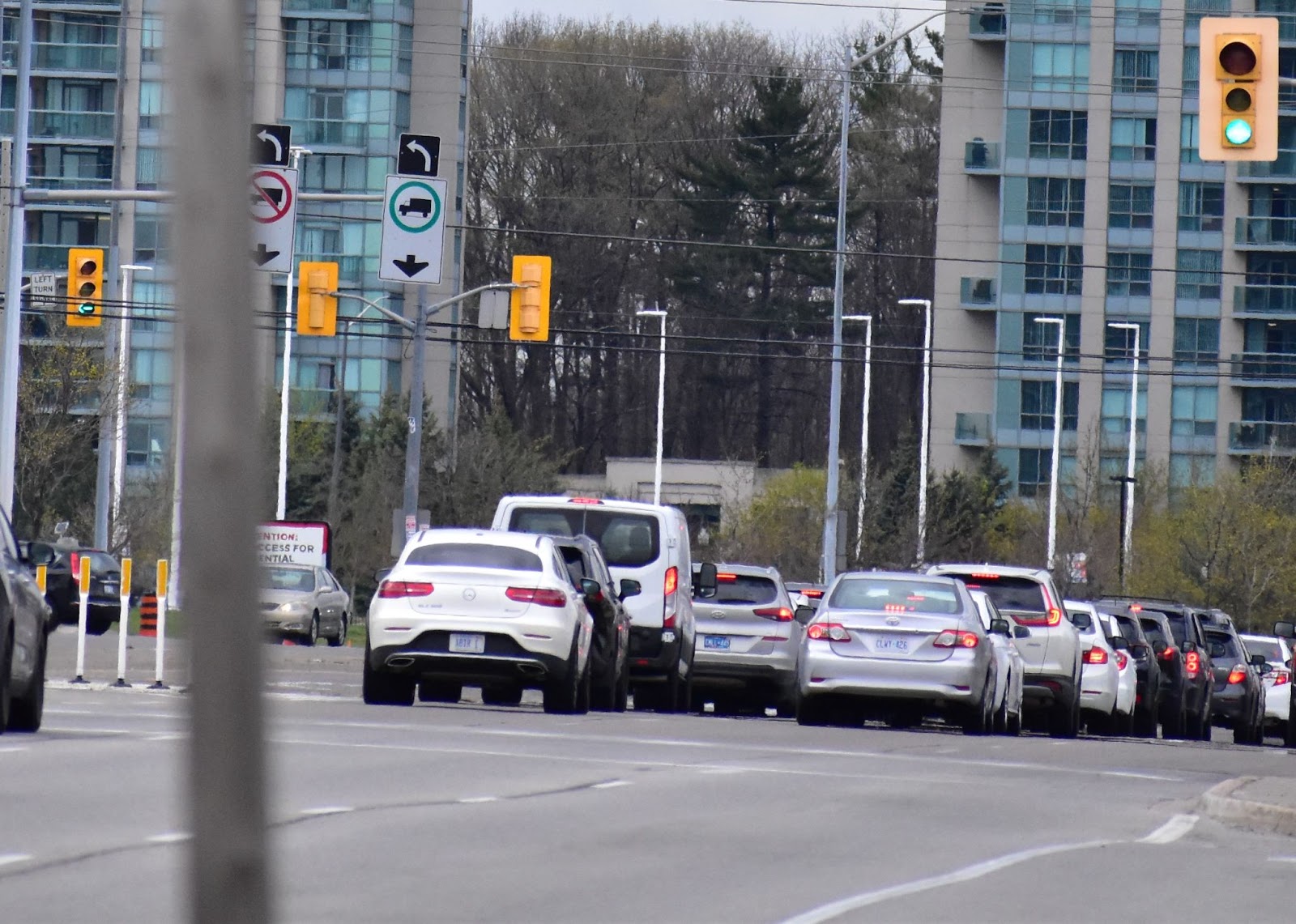 It is unclear what e-scooters would mean for Brampton’s busy roads.

How the Brampton program would be regulated, and the possible cost to taxpayers for enforcement, not to mention potential healthcare costs that would be borne by taxpayers, are issues that received little attention before council members provisionally approved the idea on the advice of private companies.

E-scooter companies have relied extensively on technology to enforce rules with their scooters.

During presentations to Brampton Committee of Council on Wednesday, Lyons of Bird Canada and Shoaib Ahmed, CEO of SCOOTY, highlighted smart GPS capabilities as a key control. They said their companies could enforce helmet wearing by requiring a selfie from users and use geofencing to slow riders down or stop them from riding or parking in areas where e-scooters are forbidden.

“We have all kinds of technology surrounding other safety features related to this,” Lyons said.

Brampton is putting all its eggs in that basket. The system staff have proposed will leave e-scooter companies almost entirely in charge of their own enforcement of their own rules. The City, under Mayor Patrick Brown’s massive budget cuts, has been unable to keep up with enforcement of other issues, recently deciding to hire a private company to handle the registration of illegal secondary suites because internal staff were overwhelmed by applications.

Other enforcement needs in the city have also suffered due to underfunding.

“Commercial operators will be required [to] identify and implement e-scooter parking/docking areas,” the staff report says. “They will also be required to educate users on proper parking procedures, such as not blocking the sidewalk clearway path of travel, obstructing features such as utility accesses, garbage bins, or doorways, or curbside zones reserved for uses such as buses, taxis or loading.”

The City and the Peel Regional Police will have a role in enforcement. “Enforcement requirements for personal e-scooters are expected to be fairly modest but depend on uptake,” the report says. It’s unclear how staff came to this conclusion.

“Participating municipalities are required to monitor all collisions from motor vehicle collision reports (MVCR) involving e-scooters on road segments within the Municipality and to provide information to MTO upon request,” a spokesperson for the Region of Peel told The Pointer. The Peel Regional Police did not respond to a request for comment ahead of publication.

Brampton will be in a position to generate revenue from the program. It will charge an annual administrative fee of $5,000 to companies operating in the city, with an additional $50 per scooter per year. The City will collect five cents for every trip.

The approval process is central to why Lepofsky says e-scooters are nothing but a menace. The rollout is being led by private companies with the blessing of municipal governments that have done little research and have limited oversight of the operation.

The City of Calgary was repeatedly used as an example by the e-scooter representatives to convince council members the pilot is a good idea. The Alberta city ran a pilot between 2019 and 2020, before confirming the continued use of e-scooters last year. A 2020 study by the City of Toronto suggested Calgary’s e-scooter program would be 350 times more likely to result in serious injury per kilometre than the Toronto bike share program.

Stephanie VandenBerg, a University of Calgary clinical assistant professor and emergency physician who spoke to The Pointer, studied the impacts of e-scooter use around the city’s pilot in detail. Between 2019 and 2020, she recorded 1.87 million e-scooter trips by around 200,000 riders in Calgary. A total of 1,272 ended up in emergency or urgent care (around 3.5 percent of the traumas seen over that period), with a rate of one hospital injury for every 1,400 rides.

This happened despite the fact Calgary, with a vast cycling network and established enforcement experience, is in a better position to protect e-scooter riders than Brampton. “Calgary has the most extensive urban pathway and bikeway network in North America,” the City’s website says.

The majority of injuries in Calgary occurred at night, between 8 p.m. and midnight. “They were probably being used to travel between social events, with or without some level of intoxication,”  VandenBerg told The Pointer.

Experience did not necessarily improve the situation.

A total of 33 e-scooter riders required ambulances in Calgary in 2019, rising to 69 in 2020. The total number of e-scooters in the city stayed constant during that time, although VandenBerg was unable to discern if the total number of trips also rose.

“[E-scooter companies] have an immense amount of data… that would help us understand crash and injury characteristics but companies have not been willing to share that information,” she said.

Lepofsky is concerned Brampton will open the floodgates to an unregulated industry that could further disadvantage residents with disabilities from going about their day. Unconvinced by the technological promises and talk of enforcement, he has pushed hard to keep the GTA e-scooter free.

“This is real human beings,” he said. “So the question is, does Patrick Brown and the City council care about people with disabilities or do they just care about the corporate lobbyists?”