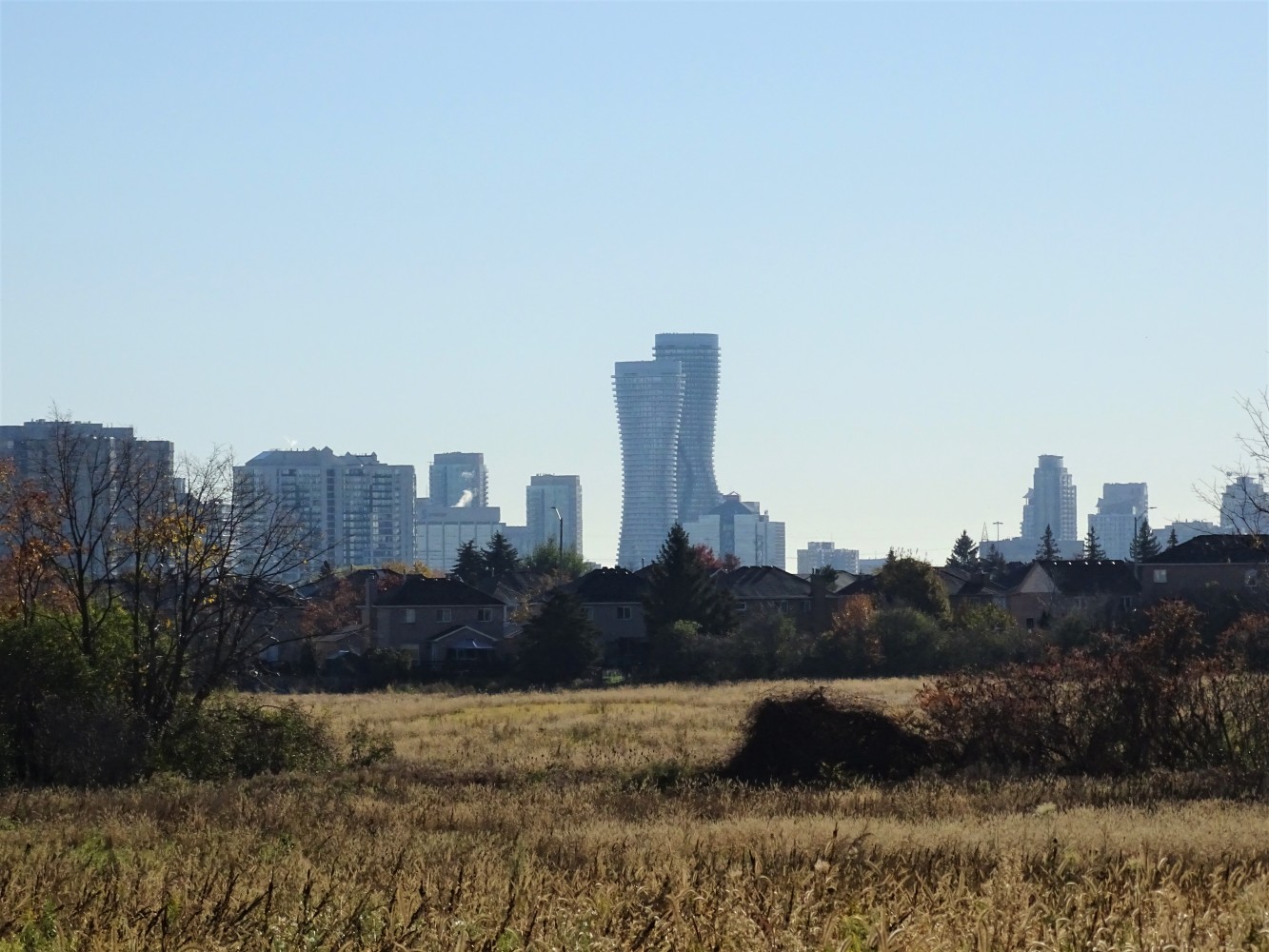 Those who routinely drive along Hurontario Street might not even register the giant 200-acres of open space being crowded out by the booming city, but for many, Britannia Farm is a green oasis surrounded by the urban landscape of modern Mississauga.

For centuries, this sprawling plot of land has stayed largely untouched from the rise of the postwar city. Hosting a mix of ecosystems and wildlife, the breathtaking terrain is one of the city’s best kept secrets — fenced off even from its immediate neighbours.

Bristol Road to the south, Matheson Boulevard sitting to the north, McLaughlin to the west and Hurontario on the east, Britannia Farm has stayed largely untouched since The Mississauga walked lightly on the land. 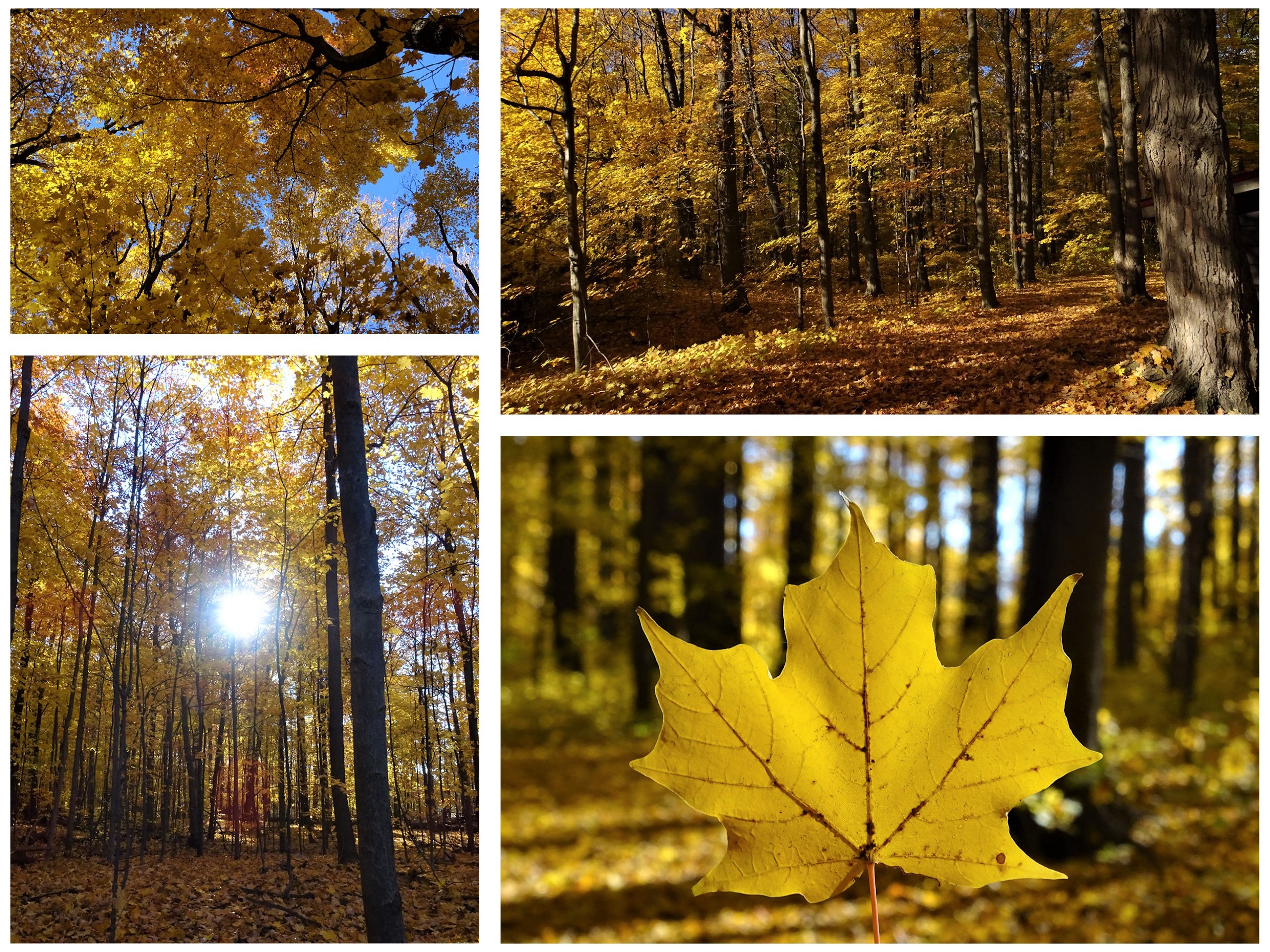 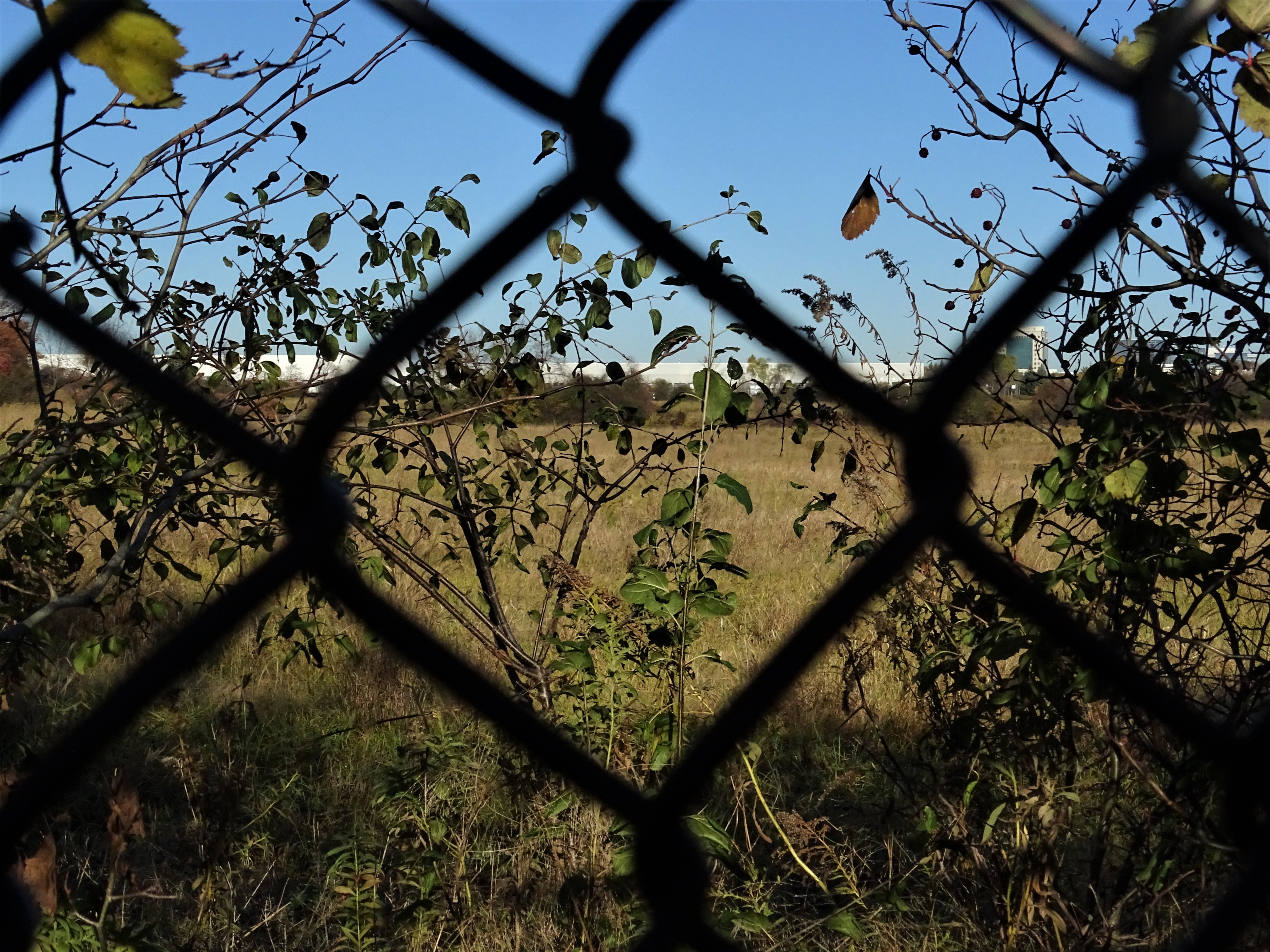 Years of brutalities, famine and disease left the colonizers with the upper hand. The Mississauga surrendered the land in Treaty 13A (present day Mississauga) to the British. An influx of Loyalist, British and American immigrants came and took the countryside along Dundas Street and west of the Credit River for their own.

As more settlers arrived in the area, the bustling beginnings of urbanization came with them.

The original townships of Mississauga each identified with a specific occupation. Cooksville and Dixie were the farm service centres, Erindale, Streetsville and Meadowvale were millsites and Port Credit, Clarkson and Malton were hosts of the railway stations and seaways. Between these bustling villages, one area was left untouched.

Centre Road was dominated by farm properties on each side. The structures dotting Britannia Farm today are not the original buildings, but show a re-creation of what likely would have been found on the property in the early 1800s. Later the roadway became more popular for travel and was called Hurontario since it stretched as far north as Lake Huron and south to Lake Ontario. 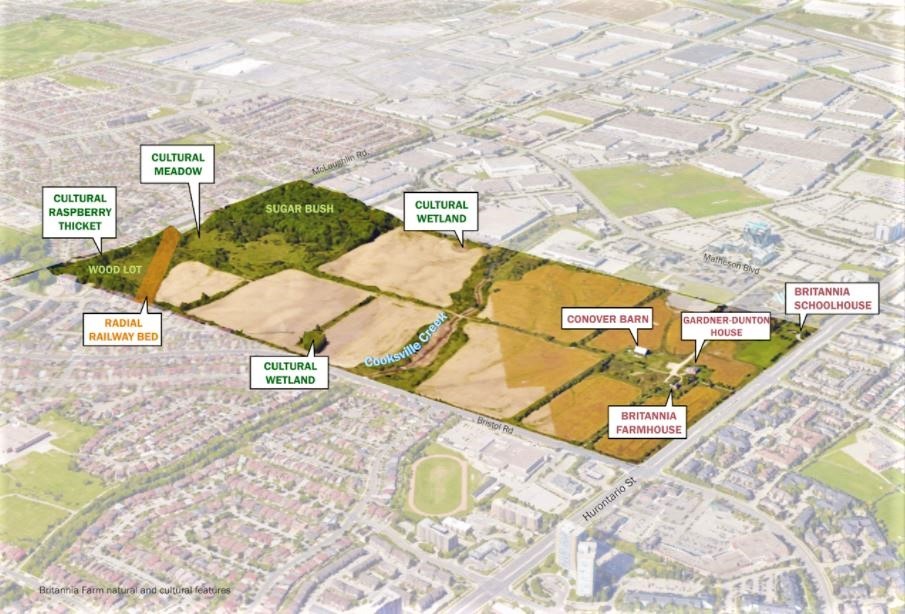 In 1833, King William IV announced the 200-acre plot would be granted to trustees William Thompson, Reverend James McGrath and Joseph Gardner specifically for educational purposes. To fund the initiative, the parcel was leased to farmers for 20 year periods. Schooling was privately funded then, taught at home or non-existent to many young families.

Despite the restrictions, many school-aged children found themselves for a few months out of the year in schoolhouses. It’s believed shortly after the land was given its educational title, with a strict and statute-barred proofed designation from the king himself that it could only ever be used for education purposes, a school building was erected on Britannia Farm, likely built in the mid-1830s. The province established a more well-rounded school system and appointed Egerton Ryerson as the Superintendent of Education and Methodist Minister. While Ryerson is applauded for his progressive views on free and mandatory education for all, his inhumane views toward Indigenous peoples and their culture also shaped the genocidal Residential School system. 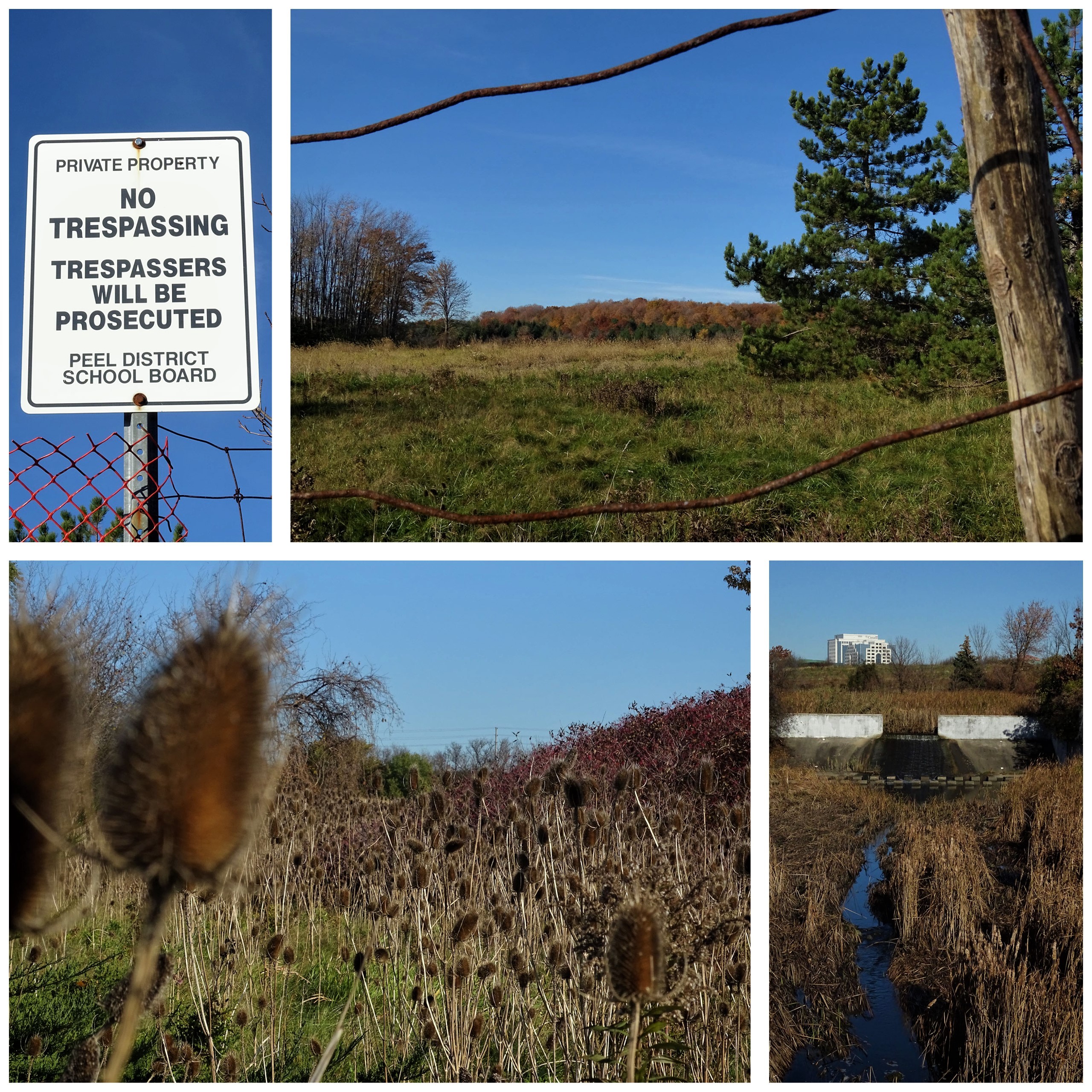 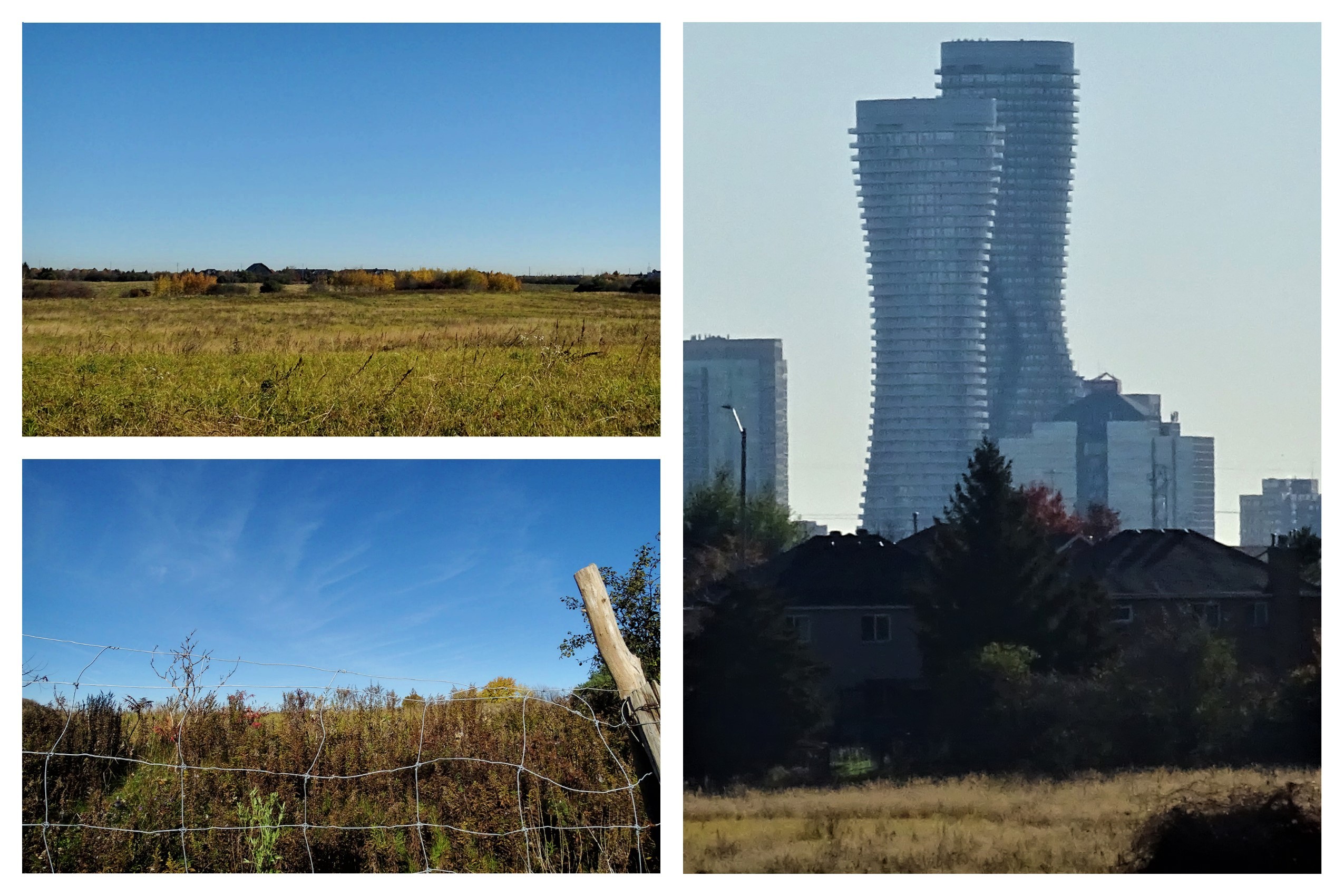 Post confederation, George Ross held the position of Minister of Education, when systems for schooling relied heavily on standardization of school sites and school houses. Early records of the system from Britannia indicated the schoolhouse frame was in poor condition and was rebuilt or renewed between 1852 and 1857 for $5,000 — close to a $200 million value in 2021.

The schoolhouse that sits on the property today was constructed in 1870 in agreement with the provincial regulations and served rural communities until 1959, two decades before Mississauga became a city.

The other historical building on the opposite end of the land on Hurontario Street is the farmhouse; architecturally it represents a second generation of farmhouse from the 20th Century. Other features still present from the early days of the rural pre-Mississauga era include a set of train tracks on the southwestern part of the property from the Toronto-Guelph Radial Line. 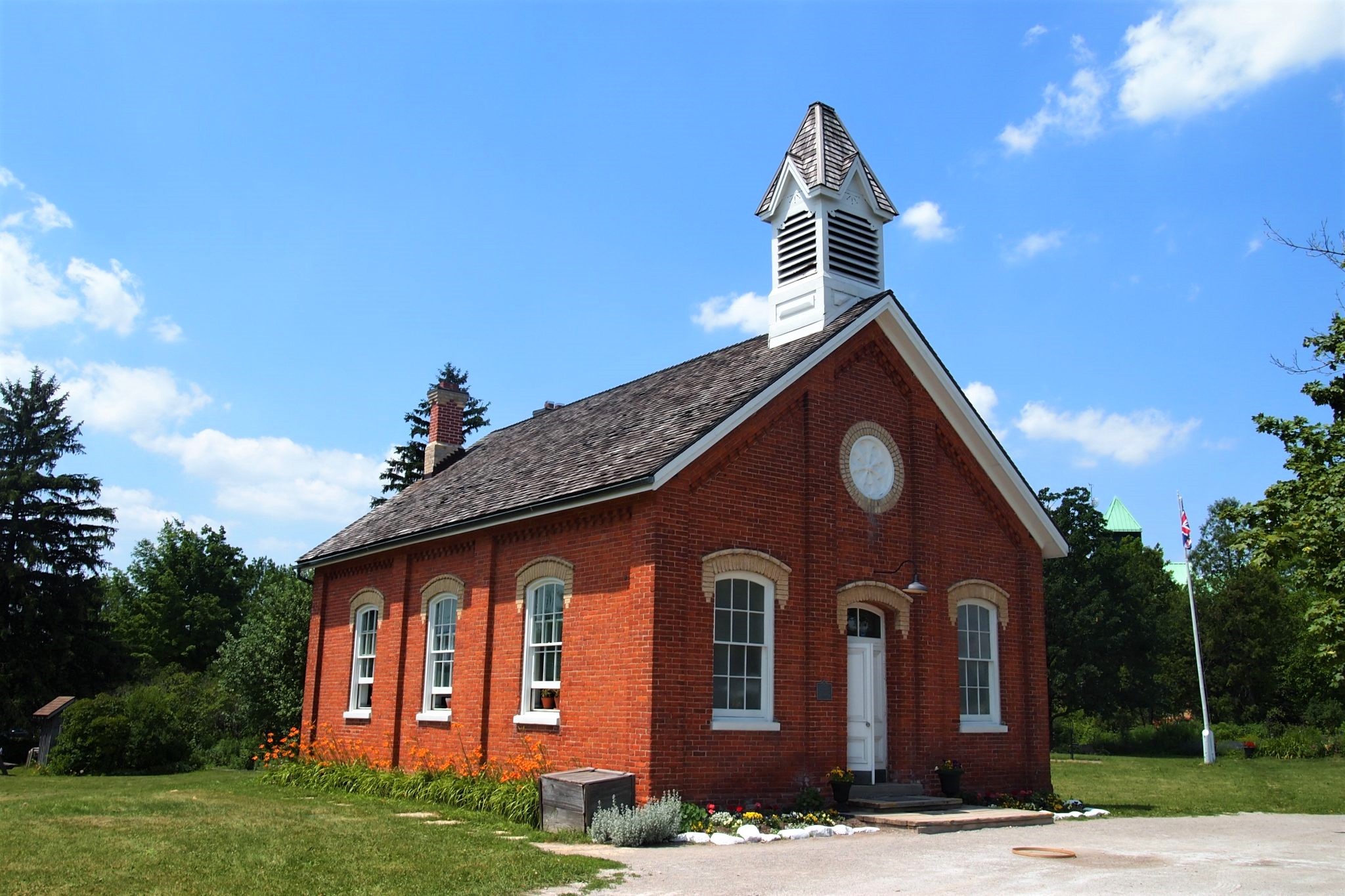 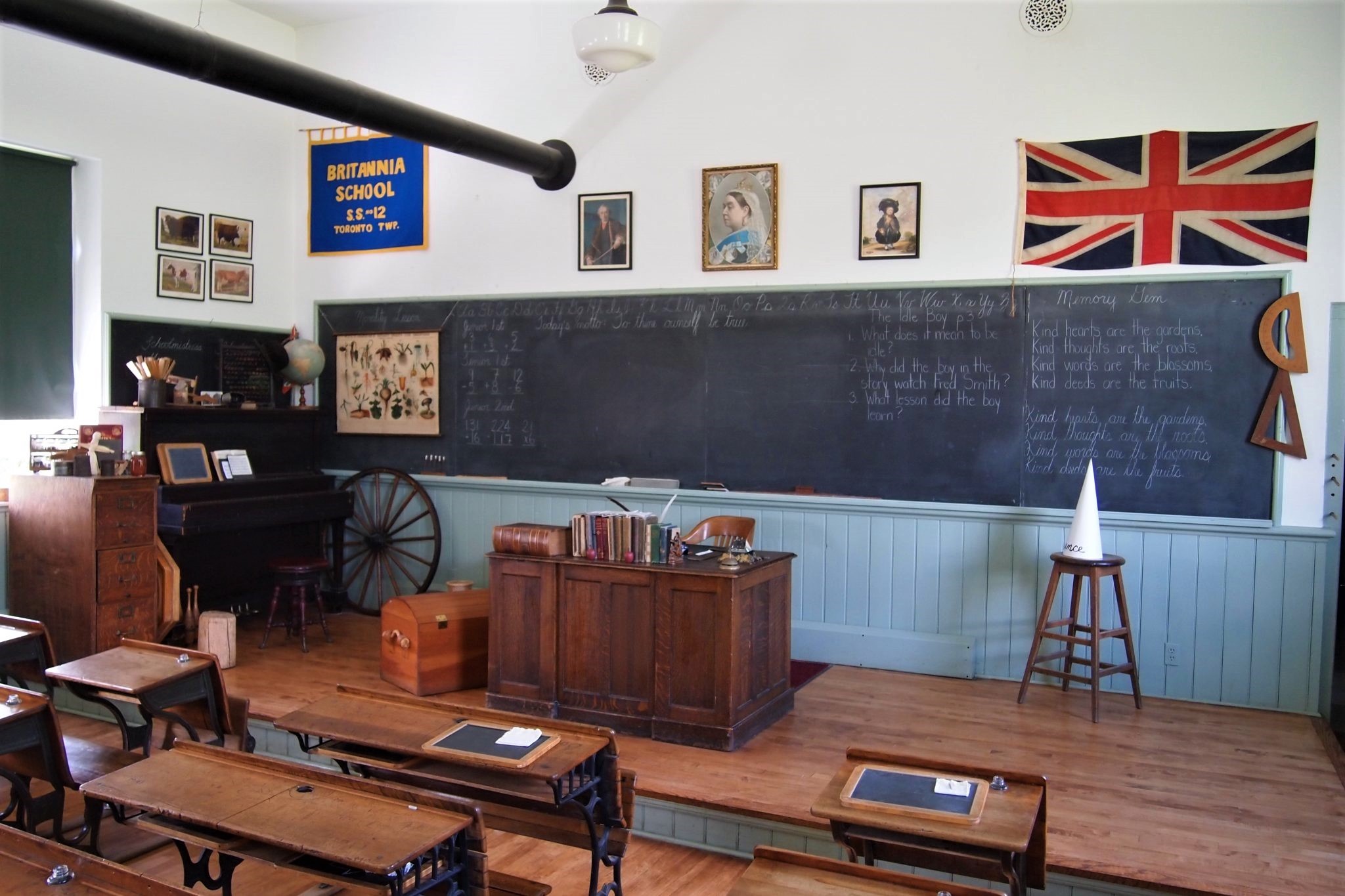 In the later 1900s, the property gained two new buildings, the Gardner-Dunton House and the Conover Barn, both of which were relocated. They were placed at Britannia Farm in 1989 to showcase how education and agriculture could be intertwined for the benefit of Peel District School Board (PDSB) students, after the entire parcel was transferred to the local education system under the agreement stemming back to the days of King William IV.

The Gardner-Dunton House is a two storey red brick home dating back to 1830 and was moved from the corner of Britannia Road and Hurontario. Conover Barn was brought to Mississauga from Sheridan Oakville Nurseries and is believed to be as old as the late 1880s.

On the furthest edge of the property lining McLaughlin Road is an old growth forest of mostly maple trees. In the past, PDSB students were brought to the area and could immerse themselves in the ways of the pioneers. Lessons on maple sap harvesting brought real world experiences to young learners in an interactive and wondrous new environment.

In the fall the forest beams a golden spectrum of colours and tempts nearby residents to trespass the various fences around the property. Cooksville Creek cuts through the land and flows down toward Lake Ontario. The water feature produces wetlands, a decreasingly scarce natural feature in southern Ontario, and gives many birds and amphibians a place to call home. 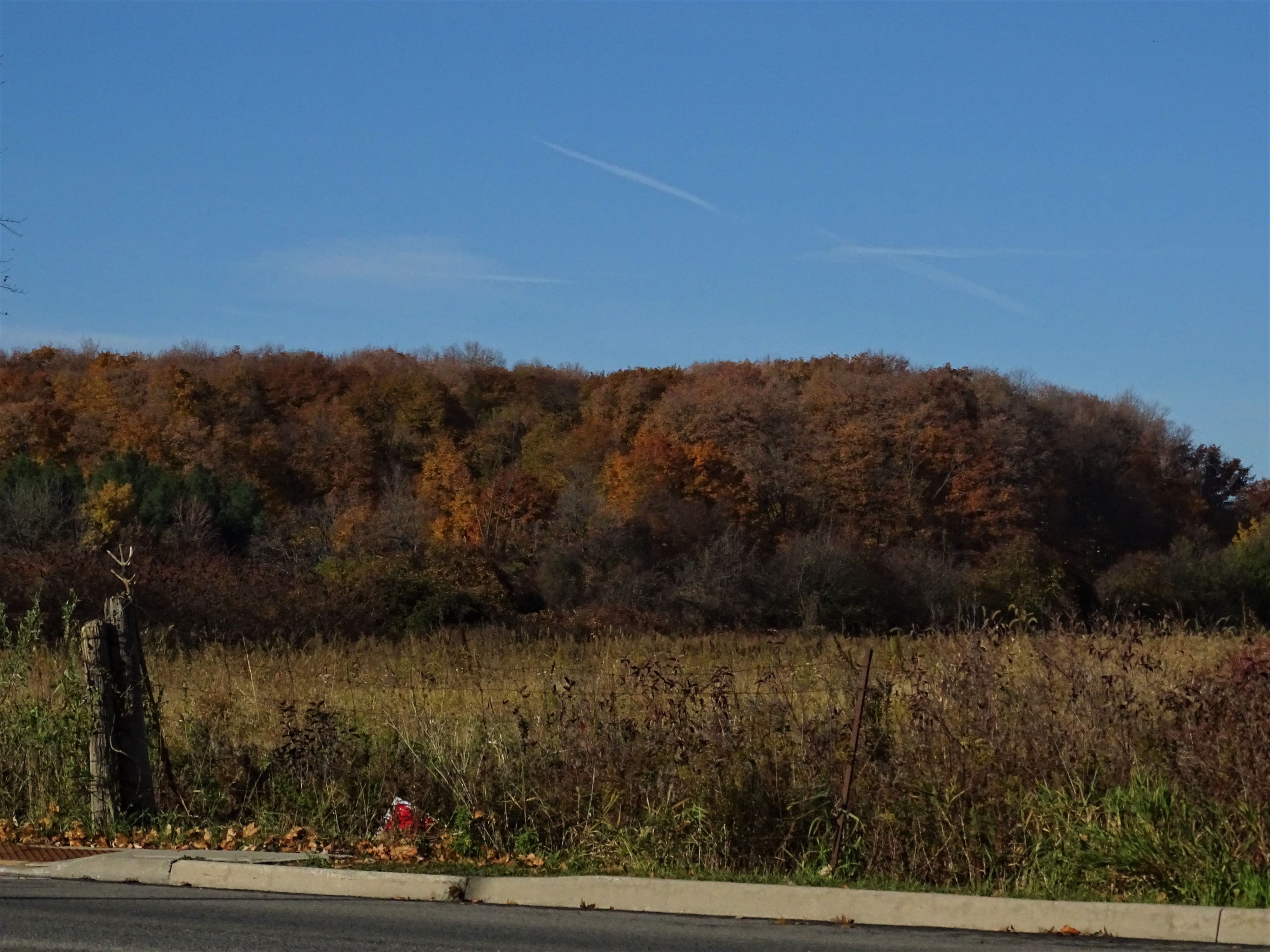 As Mississauga grew quickly from the ‘70s, eager developers wanted to redefine Britannia Farm. The blank canvas offers endless possibilities and huge financial rewards, and many people including former mayor Hazel McCallion wanted to cash in with more suburban sprawl splayed across the barren fields. Due to the designation of the plot to the school board, rezoning of the land would be necessary in order for residential or employment development to occur. Instead of barring public access to the hidden jewel, Ward 5 Councillor Carolyn Parrish wanted something to be done in partnership with the residents of the area. Armed with her usual determination, the former Mississauga MP sought out conversations with PDSB and residents to understand their ideas for the farm. Collaboratively the Britannia Farm Master Plan Refresh was created and endorsed in 2016.

Monetary constraints left the board with few funds to construct the visionary education centre desired. Instead of leaving the project for another day, Parrish worked with the City to rezone 33 acres of land to residential and mixed use medium-height buildings. The profit from the land sold would finance the rest of the 167-acre master plan and help PDSB maintain the education buildings and programs for years to come.

In collaboration with residents, the plan created open trails and opportunities for learning by exploring, while uplifting the natural elements. Ideas include community gardens where the public and PDSB students alike could participate in urban agriculture and understand how to produce food. Designated areas for a public park and trails through the sugar bush along with ecological observation decks along Cooksville Creek, will allow visitors to observe ecosystems at work without disturbing the habitats.

The plan also touches on restoration efforts for the historical buildings, allowing them to be repaired to their original historical look and feel for those welcomed to the site. Extra foliage and shrubs will be planted to section off different aspects of the farm giving each ecosystem its own unique experience. Ecological restoration of wetlands and the creek is also included in the master plan, to better assist rebirth of stronger vegetation.

The built up area will have a focus on sustainable practices and respect for the surrounding land while being sensitive to the low density community.

A champion for affordable housing, Councillor Parrish hopes the houses could be constructed for a mix-use community offering a variety of housing options and employment space.

In 2018, the lands were rezoned and the project was opened to developers. Given its proximity to Mississauga’s downtown and access to the adjacent Hurontario LRT, property values for developers looking to capitalize on the land that will be opened up for construction are not cheap. Parrish says PDSB had narrowed the search to two bids but the process was halted shortly after because of sweeping internal problems within the troubled board. It was stripped of its autonomy by the Province due to widespread discrimination including anti-Black racism, and then the COVID-19 pandemic was declared.

The project has been on hold indefinitely. 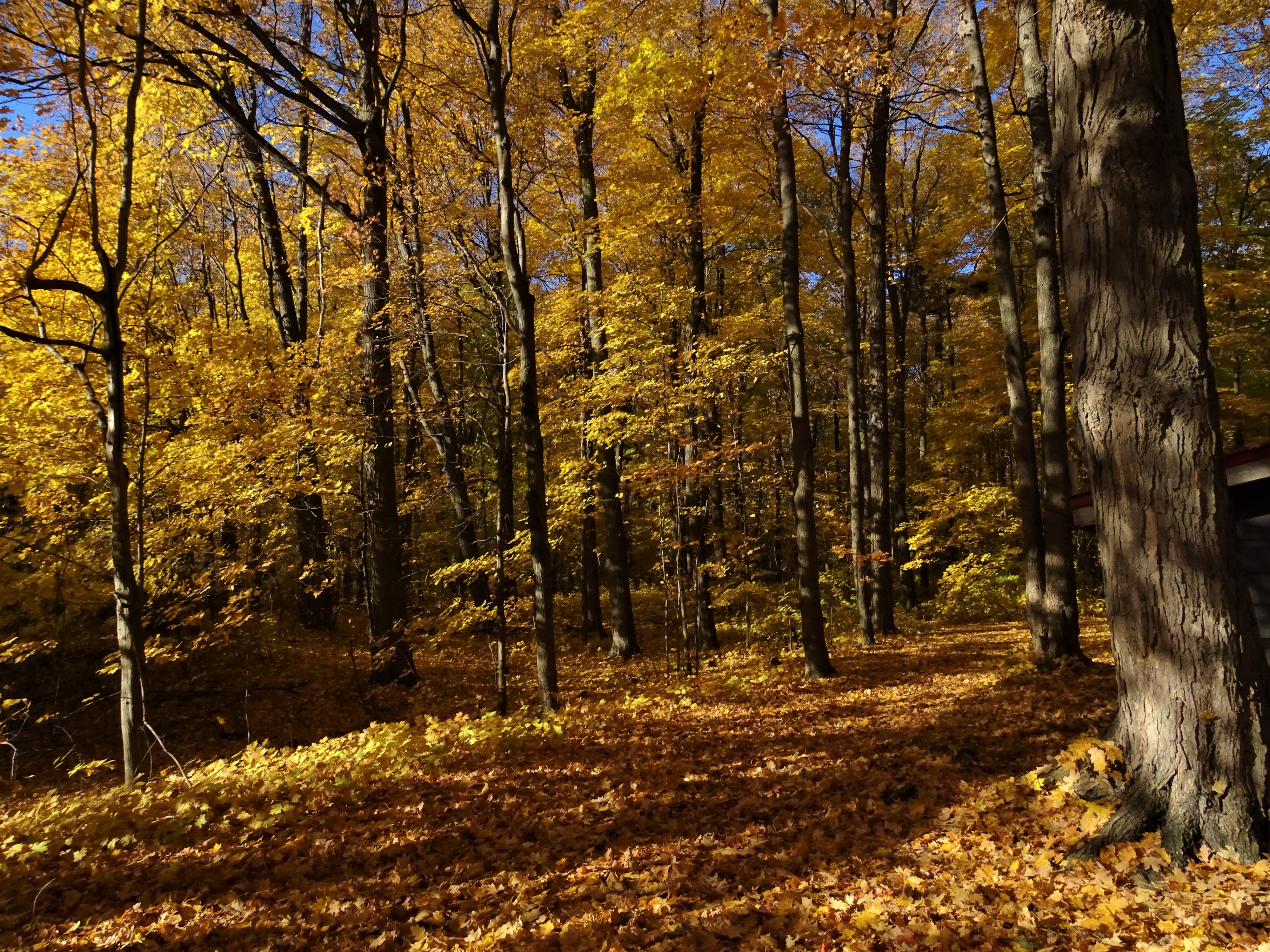 The unique parcel of land remains just as it was centuries ago, untouched and largely undiscovered by most of the area’s inhabitants, leaving residents with little but a dream of having a closer connection with nature and the history of this spectacular land that surrounds them.