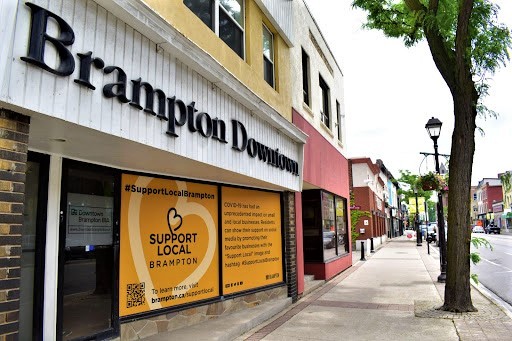 Brampton City Council has approved a $16.6-million streetscaping project for the downtown, construction work that will place more pressure on strained businesses, and will deliver only part of the work initially promised by the previously approved Downtown Reimagined plan that was quashed by Mayor Patrick Brown shortly after his election.

Instead, the city will get the first phase of the newly branded “Integrated Downtown Plan”. The first step is a pared down version of the project scrapped by Brown, who claimed there might have been hidden costs around Downtown Reimagined, despite assurances from the Region of Peel, which has taken the lead on the revitalization work because it primarily involves the replacement of aging underground water and sewer mains that have become a potentially dangerous liability. 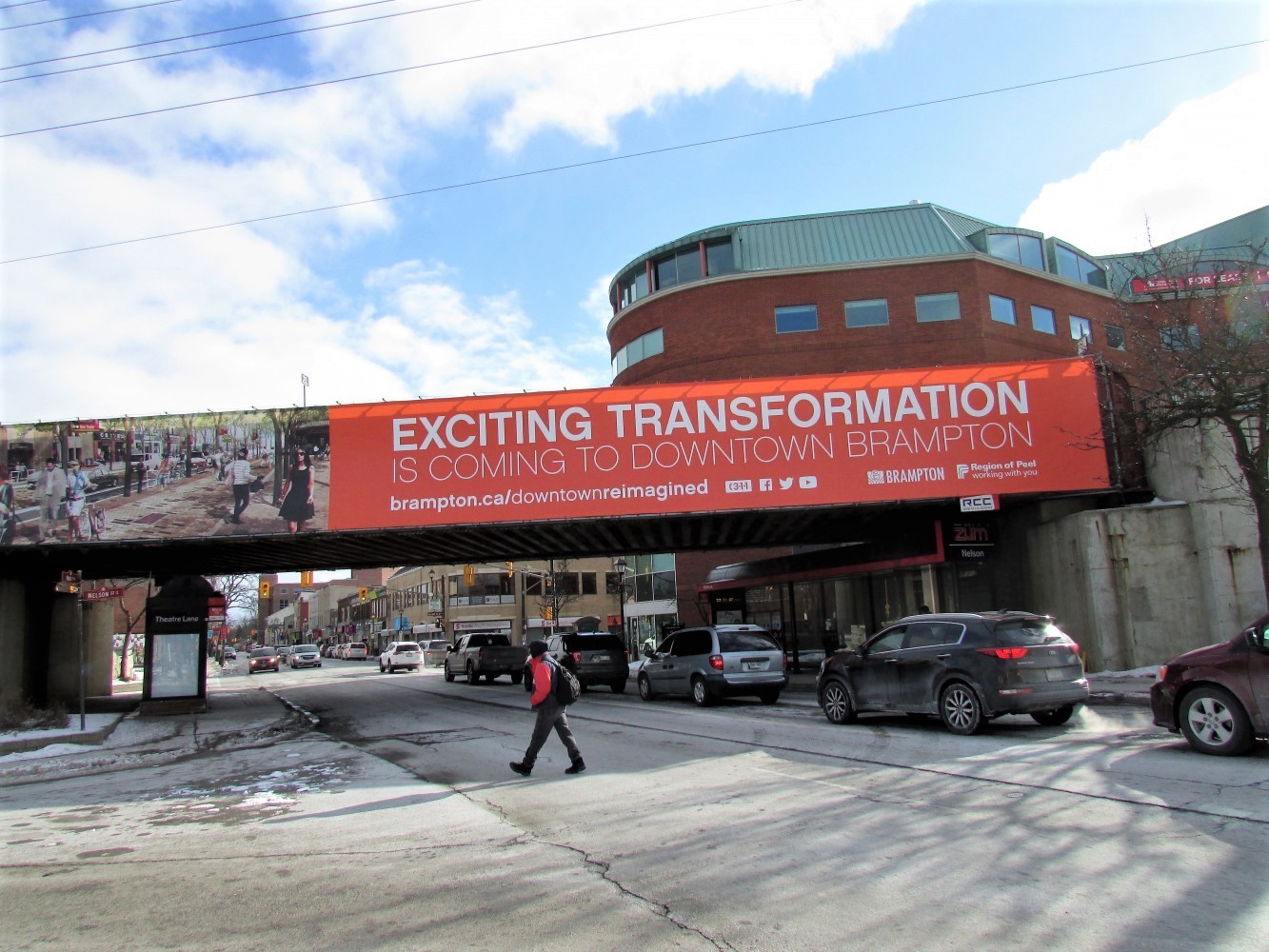 The continuous disruption for the next three-and-a-half years as the initial phase is completed will prevent pedestrians and vehicle traffic from having direct access to the area, creating more challenges for many small businesses finally starting to come out from the crippling effects of the pandemic.

For months, council has been flat-footed in its response to downtown retailers and residents desperate for improvements that have been promised for almost a decade.

Council was presented a report from staff in September that included five options with timelines and costs. Councillors unanimously voted for option #2 which is a partial revitalization leaving room for other updates later on.

The chosen plan widens sidewalks to 3 metres on Main Street and Queen Street, replaces the surface with stone pavers and will cost the City an estimated $16.6 million to design and construct within four years.

Most of the Integrated Downtown Plan (IDP) first phase will involve a budget increase, as the project was not dealt with when it should have been more than a year ago, prior to the Region establishing its infrastructure work and the City’s budget process for 2021, which failed to even address the demands of area businesses and residents, many of whom were angered by Brown’s heavy-handed move to cancel the previously approved comprehensive revitalization project. He scrapped Downtown Reimagined immediately after promising voters to freeze taxes, which would have been hard to do in his first year of office, if the long-planned work had gone forward. One of the submitted bids to do the sweeping redevelopment of the streetscape came in at more than $70 million.

The new, last minute option, ahead of the Region’s work, which will likely begin in November, allows the City to only disrupt businesses once, as the revitalization work and the infrastructure replacements will now be coordinated.

Had Brown not quashed the original plan, which was much larger in scope, all of the work would have been completed this past summer. It would have been ideal timing with the pandemic as many businesses were closed throughout stretches anyway, while most downtown stores are only now starting to return to pre-pandemic capacity. 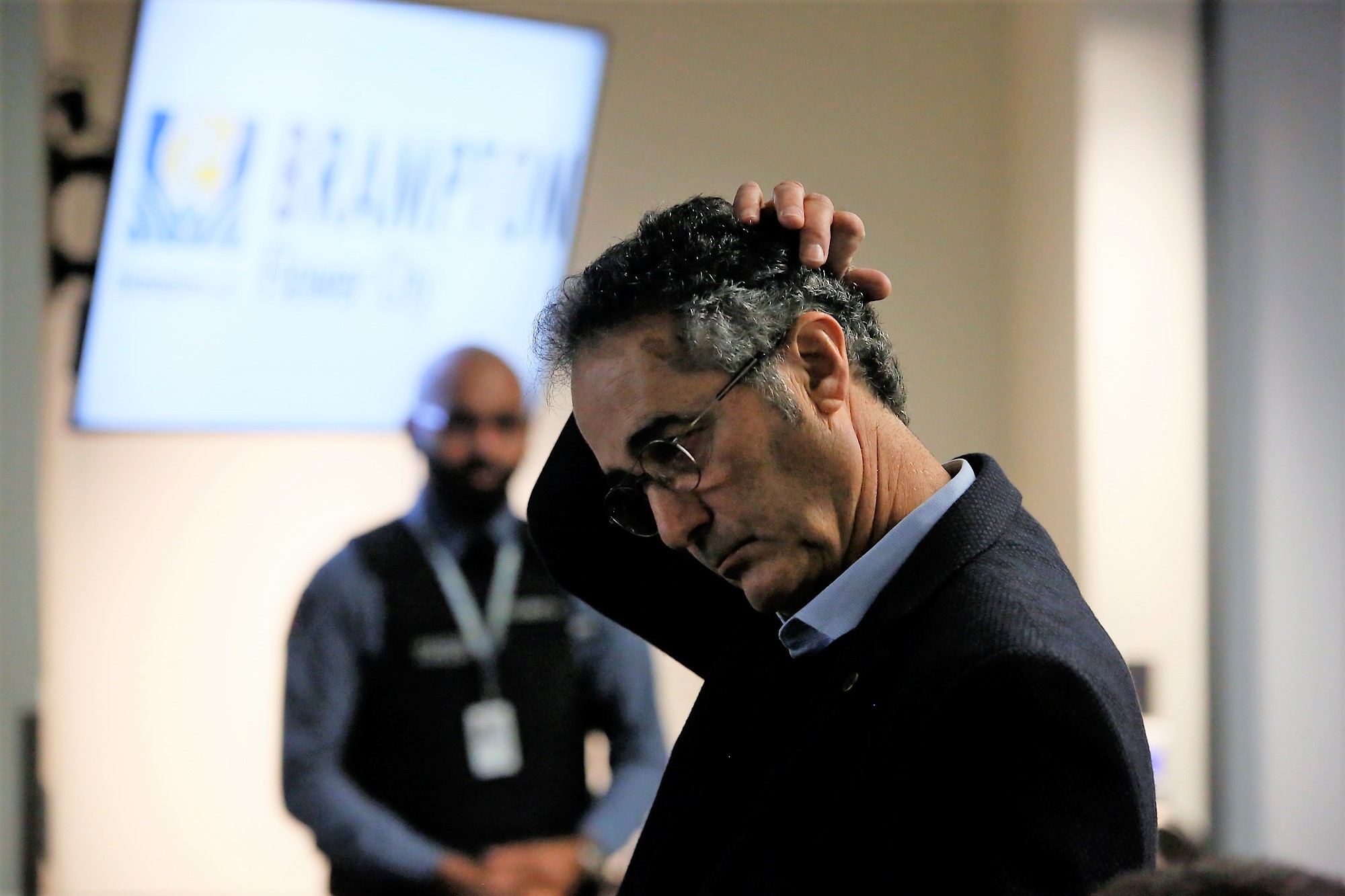 Instead, the construction work about to begin could pose further challenges to entrepreneurs that have barely been able to survive the past 18 months.

Beyond the sidewalk widening and stone features that have been approved, council could decide to budget for movable planters, mountable curbs and on-road bike lanes through much of the historic downtown area. The decision to add more items to beautify the streetscape will come at a later date.

With the widening of sidewalks, the positioning of existing storm sewers and gutters will conflict with existing utilities like hydro, telephone and gas lines. Brampton says it will work with the Region of Peel to adapt a design for the utilities and the wider sidewalks to coordinate plans with the sewer and water-main work. The design is expected to take 1.5 years and will tack on further construction into spring 2025.

Before the last minute response to residents, commercial property owners and entrepreneurs demanding improvements, Peel Region was set to complete its construction by 2023.

October 18, Brampton issued a “Change Request” to ask Peel if its upcoming November construction could include council’s option-2 decision.

“Option 2 allows the Regional work to proceed and the streetscaping design and construction to follow,” a City spokesperson told The Pointer. “Any opportunities for synergies to align work will be incorporated through the next steps.”

The request didn’t need to be approved by Regional Council, and Peel staff told The Pointer they will continue to work collaboratively with Brampton on the matter. Regional staff said the tender on the project is closed. Any ballpark estimate of additional costs to the City will have to be determined after the work begins, if cost escalations are encountered, which could cause further delay.

“If there is an issue with including any of the work in the Region’s project, a separate tender may be released by the City,” the Brampton spokesperson said in an email. “Brampton's streetscaping initiative is not contingent on the Region’s approval."

In a much anticipated decision for the downtown business community, council has finally made a concrete step forward on the process that likely can’t be reversed the way Brown back-tracked on Downtown Reimagined. Unlike the 2018 municipal election, which introduced an entire layer of politics driven by the new mayor, next fall’s election will take place after work has already begun.

Evans is hopeful the project will create momentum for the area and give businesses hope for a future, potentially reanimating a downtown that has seen many shuttered establishments. As someone who has lived almost his entire life in the city, he really believes downtown could be the place to be, once the project is complete. 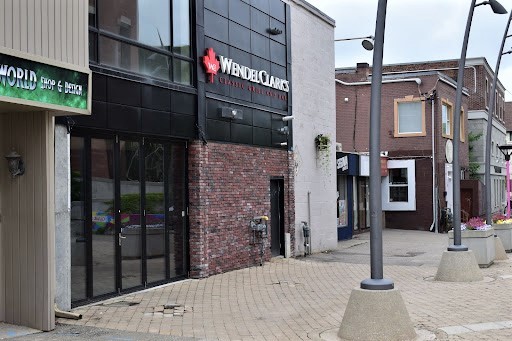 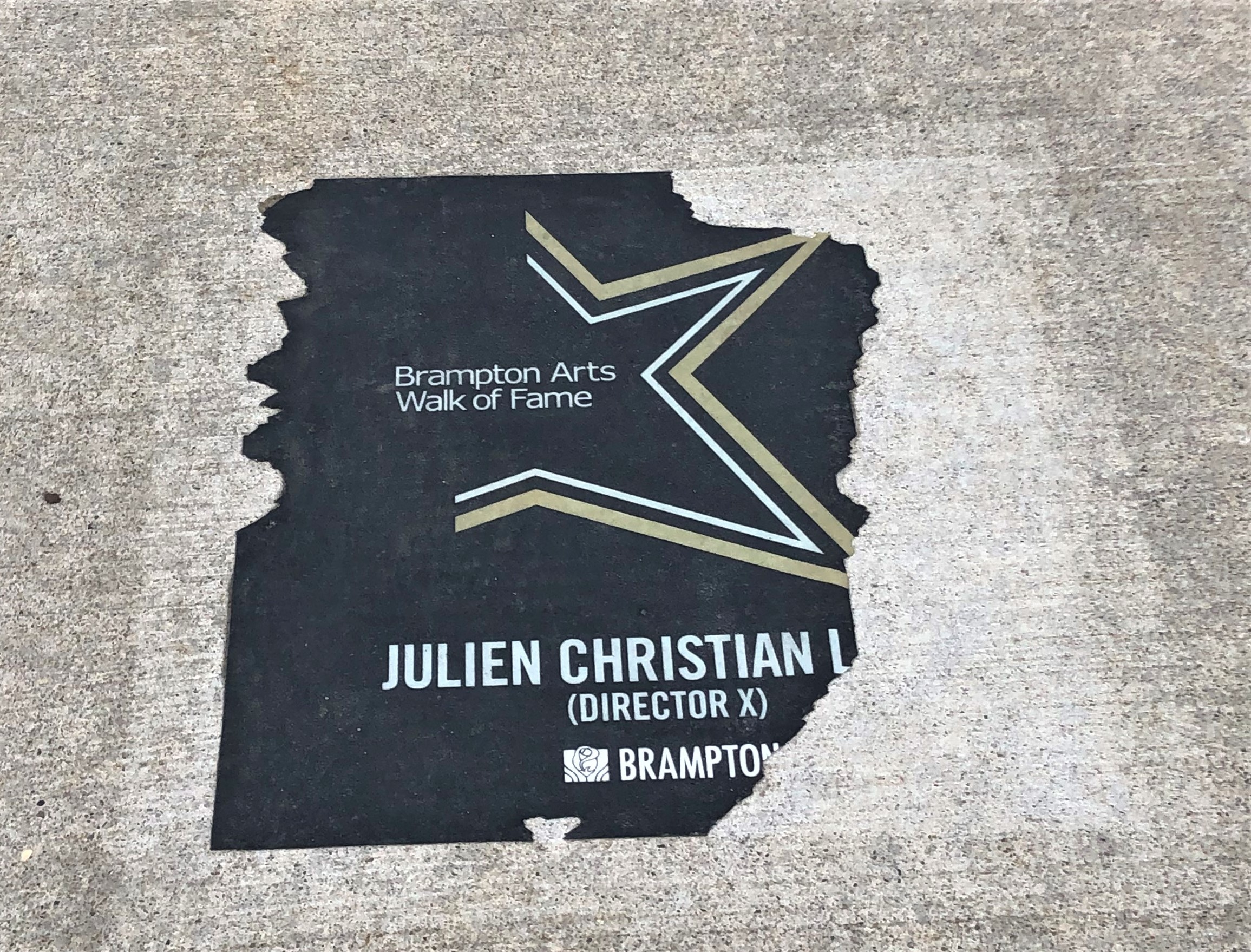 Sidewalks and roads are in desperate need of repairs and updates, even the city's Walk of Fame is looking shabby.

“If you get a foothold now, where are you going to be three-and-a-half years from now? I think you're going to be in just an exquisite place,” Evans said.

If his dream comes true, it will be no thanks to Brown, who has failed to bring any economic activity into the area, and pushed his populist tax claims despite the desperate needs of downtown stakeholders, many of whom have pointed out that the mayor’s fiscal claims are misleading, as utilities and services have continued to rise on his watch, while all the costs he has deferred, such as the local contribution for the upcoming expansion of Peel Memorial, will be even more burdensome to taxpayers when the tax bills balloon in the future. Brown could be gone by then, as he’s spent much of his mayoralty more focused on the federal Conservative Party, which he used to represent.

For now, the curtailed downtown project will move ahead but some of the work could be ripped up and redone if the City decides to proceed with a full streetscaping including narrowing of pavement, more landscaping, improved street lighting and traffic signals, along with accommodations for an LRT that many council members are determined to bring up Main Street.

Rowena Santos has been particularly confusing, asking for an eleventh-hour change to the Region’s work earlier in the year, to accommodate a last-minute notion around an LRT that has not even been approved and has no funding. Regional councillors criticized the move and questioned why Santos wasted three years before coming forward with a plan that made no sense, right before the Region’s infrastructure work was set to begin.

The work finally set to move forward has been accepted as the best alternative to the expansive Downtown Reimagined project Brown cancelled.

“I was satisfied [with what] option 2 provided,” area councillor Martin Medeiros told The Pointer.

When asked why council moved forward with option 2 rather than the similar — less expensive — option 1, Medeiros said there was more flexibility in providing a phased approach to the downtown redevelopment.

“It really gives us the flexibility to sort of scale up or scale down what we want in the downtown, because everything ultimately goes to cost and what we can afford.”

Three other options were presented to council which offered a full streetscaping project, each planned around different concepts for a surface or underground LRT route. All three would have cost the city upward of $70 million and would have taken much longer to complete. They are almost identical to what the previous council had decided when Downtown Reimagined was approved.

Staff also indicated revitalization work of Ken Whillans Square and Garden Square can move forward as part of Brampton’s new downtown plan, which could be constructed at the same time or be done outside of the approved work.

The Garden Square plan would take approximately two-and-a-half years of designing and five years of construction. It would cost $4.4 million overall. The new plan for Ken Whillans Square would cost $16.5 million and be designed and built within five years. 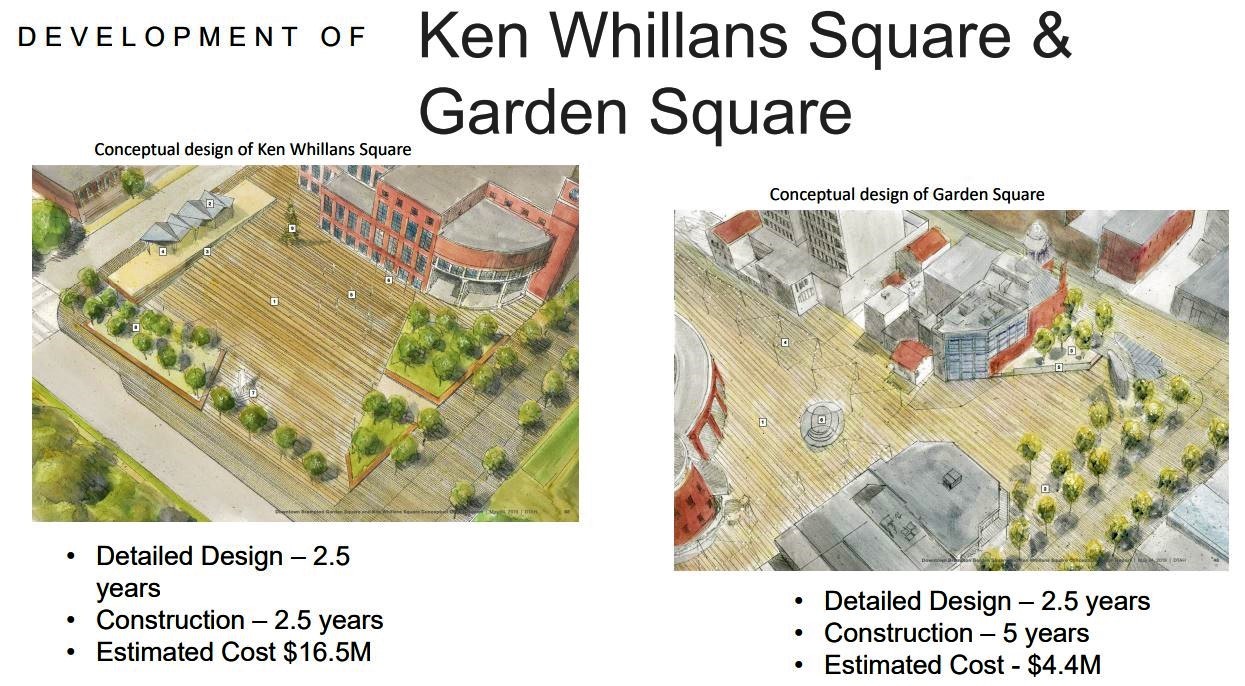 Aspirational plans presented to Brampton City Council could become reality, if elected officials are willing to invest the money into the area.

The lack of revitalization in downtown and delays from the current council have been an ongoing issue this term. Before Brown and the current council were elected in 2018, Downtown Reimagined was set to create a beautiful and vibrant city centre to attract locals and tourists alike.

Huge murals had even been hung around the decaying Four Corners area, showing off what the transformative work would look like.

The Region had already undertaken the tendering and everything was ready to move forward as the 2018 election neared.

If not for Brown’s refusal to pay for the already approved transformation property owners had waited years for, the entire project, including the Region’s water main and sewer work, would have been completed this year.

It was supposed to be a one-time cohesive plan in coordination with the Region so the construction could be completed with as little disruption to businesses as possible.

The Region eventually said it could not wait for Brown, Santos and the other Brampton council members who seemed to be stringing stakeholders along, promising help one day, then stalling or remaining silent for months.

Regional Council rejected Brampton’s request to pause its plans, as the sewer and water lines are in desperate need of repair. One section of the pipes on Queen Street was installed between 1969 and 1970. Another section on Main Street dates back to 1995. Businesses are worried these pipes could burst any minute, as they have in the past. In December 2017, a rupture on George Street caused surrounding businesses to shut down, caused tens of thousands of dollars in damage and a residential unit had to be evacuated.

Evans, who works as an advocate for the downtown businesses, says the upcoming three-and-a-half years under construction will be difficult for owners. Strategies to help businesses cope with the years of work and mitigate issues when they arise will be key in keeping them afloat.

“My conversations with staff lead me to believe that they're absolutely cognizant of the burden that this is going to create for the businesses downtown,” Evans said. “Councillors are now fully aware of that, and there will be some kinds of mitigation strategies.”