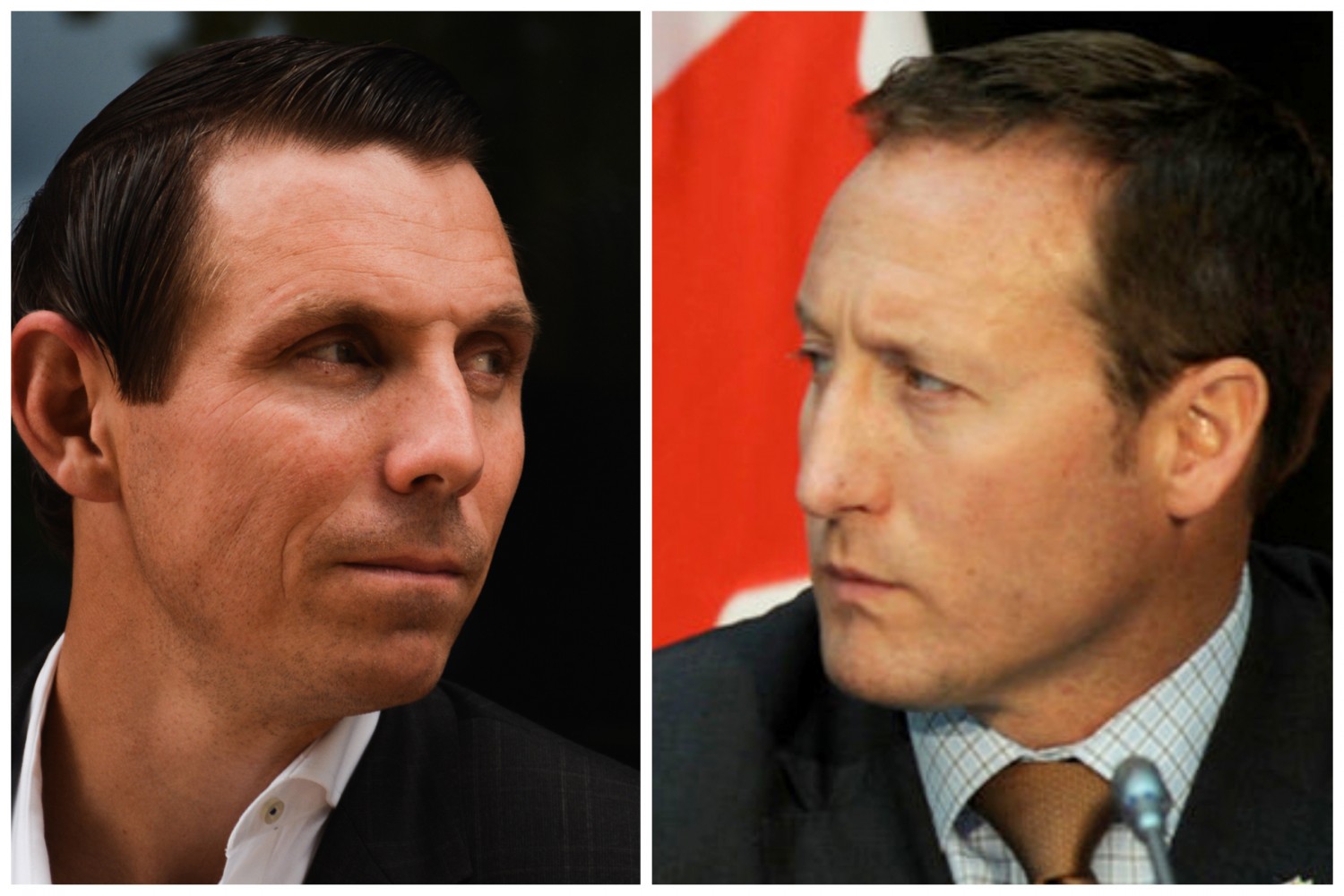 The Pointer has learned Peter MacKay was hired by Deloitte in December, months before the firm was retained by the City of Brampton to conduct an investigation into sweeping allegations of corruption within the highest ranks of the city’s government, including that Mayor Patrick Brown had secretly directed senior staff to work on MacKay’s bid to win the Conservative leadership last year.

Deloitte made no mention of MacKay in its recently completed investigation report and none of the allegations or evidence against Brown are addressed, even though the firm was hired specifically to probe allegations brought forward by senior staffer Gurdeep (Nikki) Kaur.

She stated in her bombshell email sent widely to the public, members of the media and city councillors on April 22 that Brown had engaged in misconduct when he directed city resources for prohibited uses.

At the time, Kaur provided her personal phone to The Pointer and pointed to messages Brown sent her, directing Kaur to work on MacKay’s campaign, telling her to sell memberships.

In a series of messages on and immediately around May 11, 2020, Brown gives Kaur directions.

“Please sign up membership before May 15 to support to Peter McKay (sic)”, Brown instructed her on May 11.

Another one gives her specific orders: “Meet membership sellers and then do meet and greets with members after the membership deadline is over.”

Then: “Let’s aim for 10’to 20 membership sellers. People who can do a minimum of 100 each.” Brown was attempting to sell as many Conservative Party memberships through the local riding association in Hamilton-Stoney Creek.

Robert D’Amboise is also a senior City of Brampton staffer. Neither he nor Kaur works in the mayor’s office, and Brown is not supposed to have any direct authority over them.

In other messages, Brown instructs Kaur to show up at locations during weekday work hours to help with MacKay’s leadership bid.

“The Mayor openly supported Peter McKay (sic) (a federal leadership candidate) where was the conflict of interest when the Mayor brought Peter McKay to City Hall and we were made to support this,” Kaur’s original email on April 22 alleges.

The mayor has refused to answer questions from The Pointer since April about his use of City staff and other resources to help MacKay.

Now a strategic advisor with Deloitte, MacKay told The Pointer he was unaware of the allegations against Brown.

“Your correspondence was the first that I had heard of these allegations,” MacKay wrote in an email. “I have had no conversations with anyone on the matter other than to notify my employer.”

MacKay did not respond to follow-up questions asking when he notified Deloitte, when he last communicated with Brown and if he knew the mayor was actively supporting his campaign. The Pointer published Kaur’s original allegations in a widely-read story on April 24 that named MacKay and Brown.

Screenshots of the messages from Brown to Kaur instructing her and other City staff to work on MacKay’s campaign were also published. 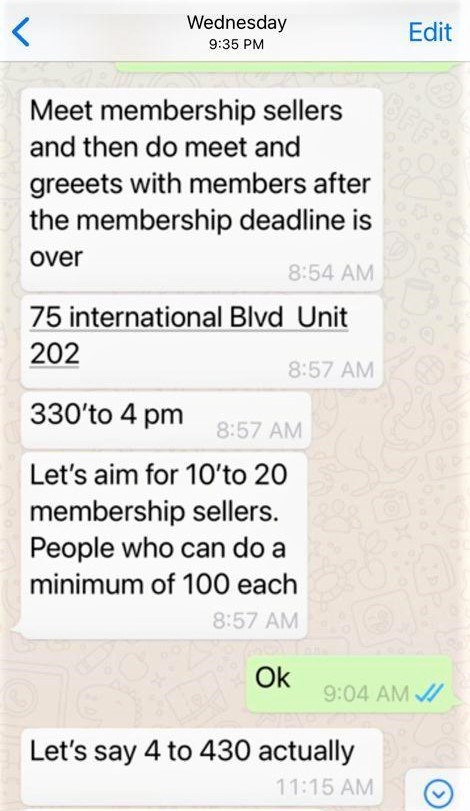 There is no evidence that MacKay was aware of what Brown was doing or that he asked or instructed the mayor to use City resources to further his campaign.

It is unclear why Deloitte made no mention of MacKay or the allegations against Brown in its investigation report. The authors, who conducted the probe, said their work was incomplete and a final interview that was scheduled with Kaur, never took place. The two Deloitte investigators refused to present their report to council and did not show up to the meeting when it went before elected officials, some of whom expressed disappointment over Deloitte’s refusal to appear and answer questions.

It appears Brown violated the City’s own rules, which should have been within the scope of the Deloitte investigation.

Brown sent the text messages to Kaur during work hours, and directed her and other senior City staff to perform tasks for MacKay during the workday. The City’s corporate resource policy states: “City staff shall not perform any work in support of a candidate or registered third party (e.g. campaign), during hours in which a person is receiving any compensation from the City, except during scheduled time off (e.g. scheduled vacation time).”

His actions also appear to violate the Council Code of Conduct. It states: “No member shall use for personal purposes any City property, equipment, services, supplies, or services of consequences.”

Despite the concerns laid out in writing by Kaur and backed up by screenshots, Deloitte did not look into them. The firm did not disclose MacKay’s position within the company to councillors and no steps were publicized that would signal transparency around the potential conflict.

“Council did not specifically exclude any of the allegations made by the whistleblower; I felt it was understood that they would all be investigated,” Councillor Jeff Bowman told The Pointer.

Councillor Gurpreet Dhillon suggested the allegations against Brown will eventually be dealt with.

“There are many concerning factors surrounding the way this review was handled,” Dhillon told The Pointer. “Some members of Council are currently looking at options to ensure accountability for the Brampton taxpayers.”

MacKay’s employment with Deloitte adds another layer to the mounting questions being raised over the investigation.

“Peter joins Deloitte Canada with tremendous leadership experience as a former senior cabinet minister in the country’s federal government,” Anthony Viel, CEO of Deloitte Canada, said in a December 2020 media release. “He will continue to be a champion of our country’s future as a thriving nation and we’re pleased to welcome him to the firm.”

Though MacKay told The Pointer he was unaware of the allegations, he was hosted for a private gathering at City Hall by the mayor during last year’s leadership bid. 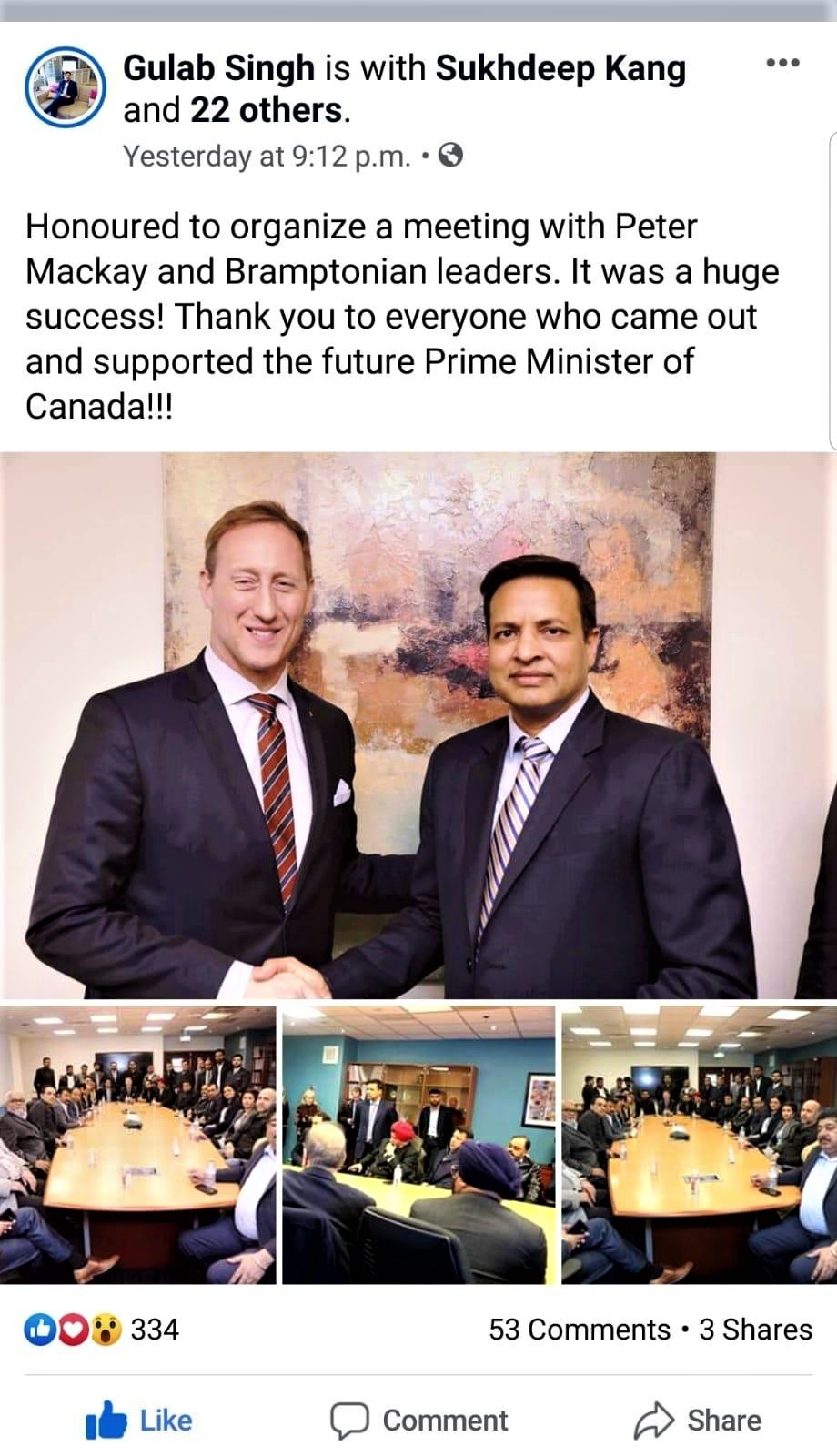 The investigators finally released their findings at the end of September in a wafer-thin document that cleared CAO David Barrick of wrongdoing on a series of technicalities. It documented an alarming subversion of the hiring process by the controversial CAO which has led to unqualified staff members holding key positions inside City Hall.

Page six of the report includes the heading: “Scope of investigation and limitations”.

It lists several key barriers to completing a fulsome investigation. They include the fact investigators could not access Barrick’s WhatsApp messages (a confidential source of communication for the embattled CAO who is supposed to use official City communication platforms to conduct all business of the City), a failure to complete six scheduled interviews and water damage that prevented the firm from accessing the City-issued device of the whistleblower. 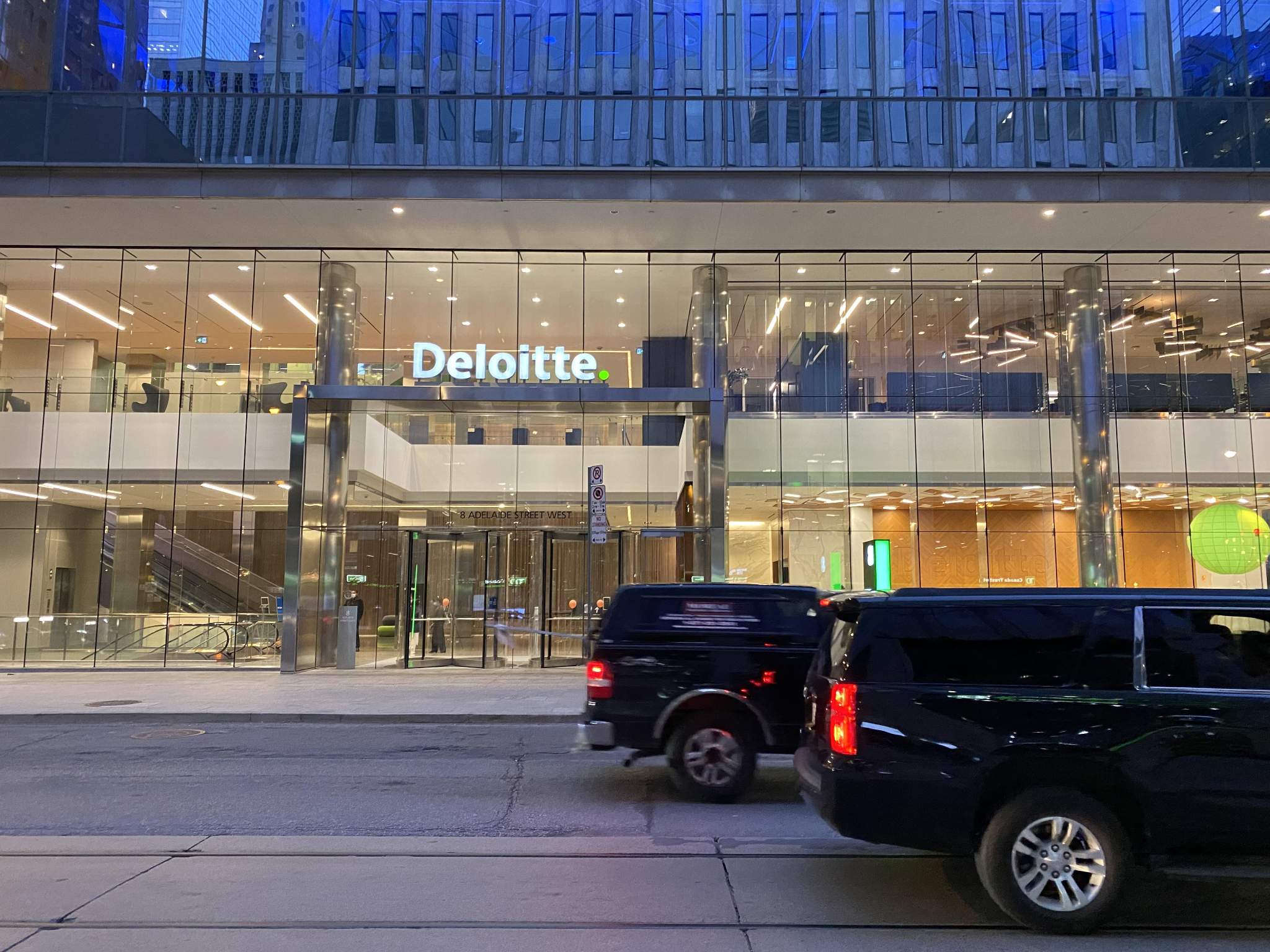 Deloitte was retained to investigate allegations in Brampton.

Bowman said he could not comment on any potential conflict of interest between MacKay, Deloitte and the investigation.

MacKay, Brown and Deloitte did not declare any conflict of interest over the firm’s role in the investigation of the allegations, allegations MacKay says he was not aware of. Brown did not respond to questions sent to his City email and director of communications; Deloitte sent a short statement.

“Deloitte LLP performs its work in strict accordance with the highest professional standards and takes very seriously the confidentiality requirements of the work we do for our clients,” Tonya Johnson, public relations lead for Deloitte Canada, told The Pointer. “Our policies and the rules of professional conduct prohibit us from discussing any matters relating to our clients.”

The City of Brampton also did not respond to questions about a potential conflict of interest, or why the allegations against Brown were not discussed in the report.

Brown directed Kaur to be at a commercial unit at 3:30 p.m. on May 11 of last year, then changed the time to 4 p.m. It appears the location is in Etobicoke, near Pearson Airport. He was attempting to sell Conservative Party memberships through local riding associations.

Kaur and D’Amboise, and the rest of the bureaucratic staff are not supposed to favour any member of council and are mandated as civil servants to work for the taxpayers, not politicians.

It remains unclear why Deloitte was chosen to investigate allegations inside Brampton City Hall, but sources have told The Pointer Brown controlled the decision and made sure Deloitte was hired for the work. The decision was made in camera, behind closed doors and the details have not been released to the public, despite attempts by some councillors for greater transparency including the disclosure of in camera minutes.

The only potential reference in the report to the allegations against Brown was a vague statement about potential future avenues for investigation. The report says concerns relating to elected officials might be forwarded to Brampton’s integrity commissioner.

The Integrity Commissioner’s office did not respond to a request for clarification.

Alongside the messages he sent directing staffers to help with MacKay’s campaign during work hours, Brown also hosted the former Conservative cabinet minister at Brampton City Hall. He also appeared alongside MacKay at Montreal Murugan Temple in Quebec in August 2020 while MacKay was trying to shore up support for his leadership bid. 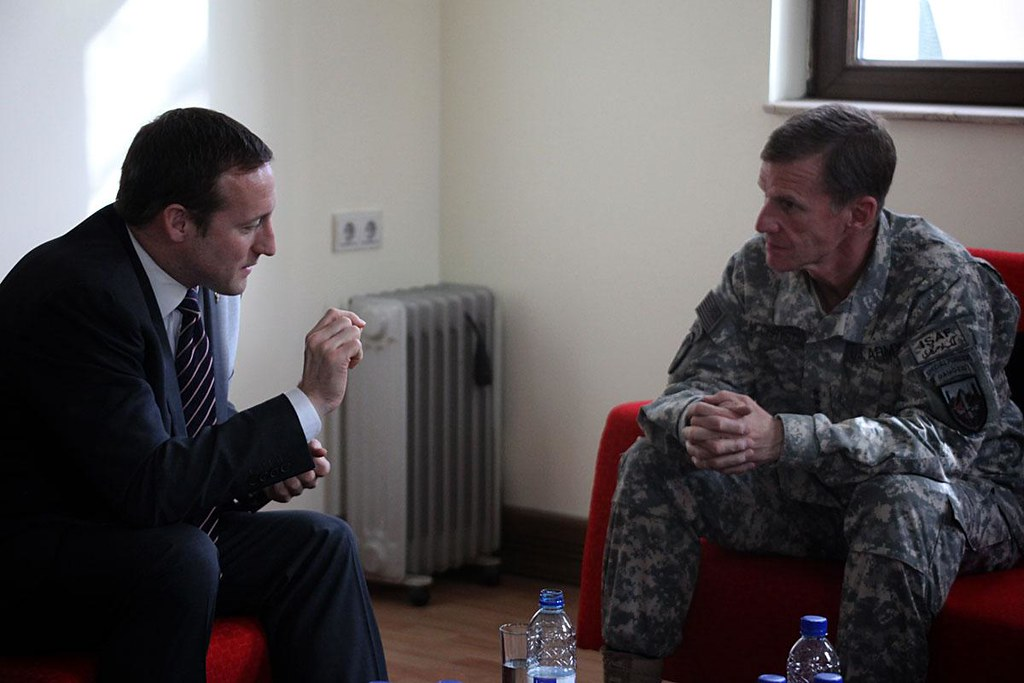 Images on Facebook show MacKay speaking in a City Hall meeting room. Brown and MacKay have a long relationship that dates back to Brown’s time as a federal Conservative MP and Brown has publicly acknowledged MacKay’s support after allegations of sexual misconduct against Brown were brought forward in 2018.

MacKay’s employment with Deloitte was never brought up to councillors.

“The subject’s name was never raised in conjunction with any role at the third party firm,” Bowman said. “I found out doing my own research a few weeks ago, when I read a press release.”