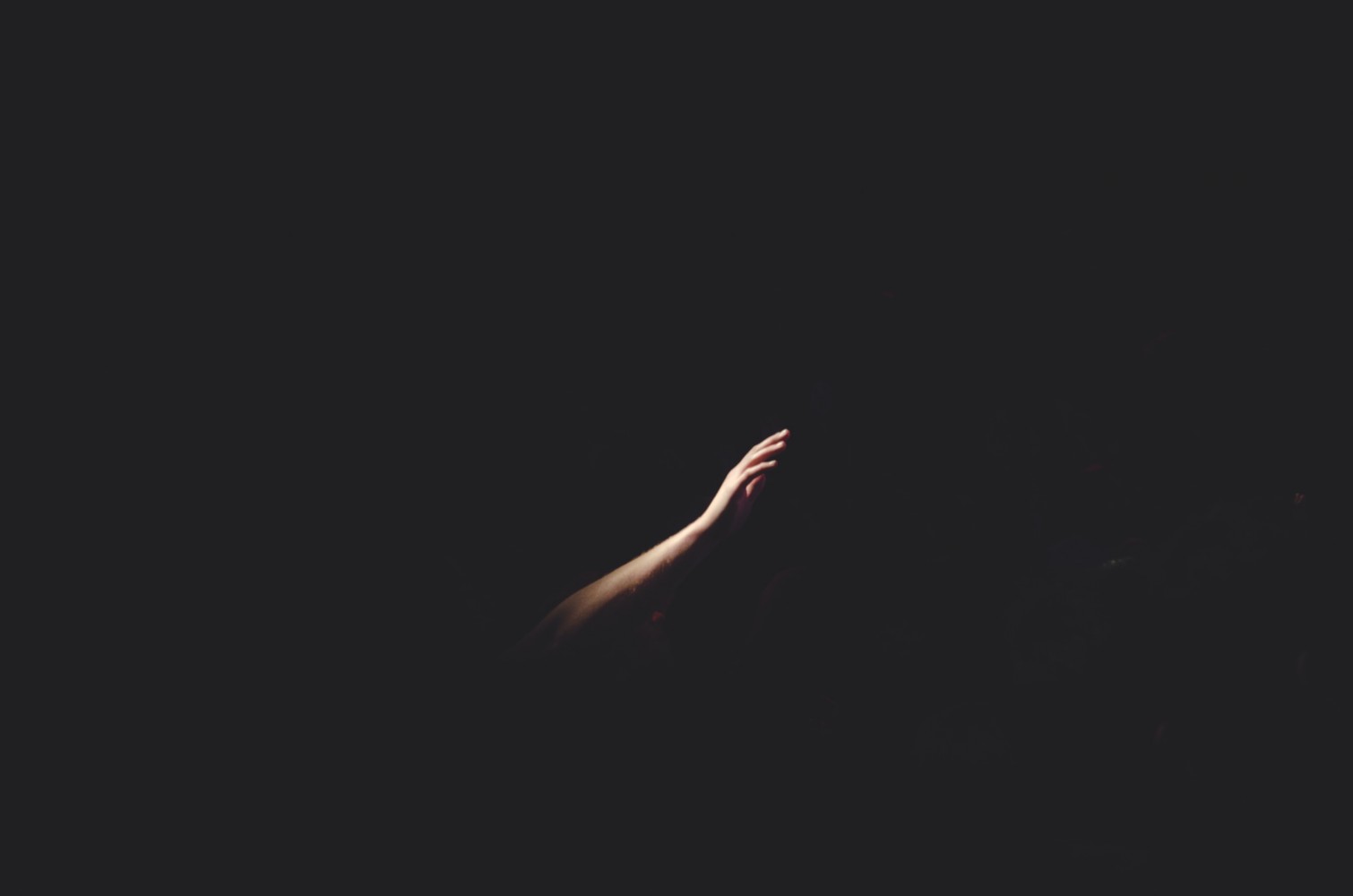 The pandemic pushed modern-day slavery into the shadows, it needs to be brought back into the light

With the world distracted by the COVID-19 pandemic, human traffickers have flourished.

Police, governments and social services have all been sidelined by the unprecedented impact COVID has had globally, forcing lockdowns and business closures, but also hampering what law enforcement agencies can do to slow down criminals, especially those who operate in the dark corners of the internet.

Traffickers were able to quickly adapt, and exploit this “new normal” for their own gain. While borders were closed, cross-border traffickers focused on exploiting local victims. While hotels and massage parlours shut their doors, traffickers turned to luring victims, particularly children, online and took to private residences or short-term rentals to conduct their business.

“Capitalizing on people’s loss of livelihoods during the pandemic and the increasing amount of time both adults and children were spending on the internet, traffickers utilized social media and other online platforms to recruit victims,” reads a July 2021 report from the United Nations Office on Drugs and Crime.

Service agencies across the globe have noted numerous changes to the methods traffickers are using and the impact on victims.

(Graphic from United Nations Office on Drugs and Crime)

Traffickers target vulnerable people, and the pandemic has exacerbated a lot of existing weak spots, as financial difficulties from job losses spread, while emotional strain from deteriorating mental health is felt by more and more people.

The vast majority of trafficking victims are women, and according to the UN the pandemic has been particularly hard on them. A staggering 114 million people lost their jobs across the globe in 2020, the majority of them were women. In Canada, 95 percent of trafficking victims are women and girls. The statistics are already suggesting more people are being exploited by traffickers because of the conditions created by the ongoing public health crisis.

An April 2020 analysis completed by Polaris in the U.S. studied two 30-day periods before the shelter-in-place orders were enacted on March 15th and compared them to one 30-day period after the emergency orders. It discovered crisis calls to the Human Trafficking Hotline increased almost 50 percent, from approximately 60 in a typical 30-day period before the pandemic, to 90 during the emergency declarations. Crisis situations include anything from someone in desperate need of shelter to escape a trafficker, to a lack of mobility to get out of a dangerous situation that requires police assistance.

“One of the systemic issues that forces individuals into human trafficking is poverty, and with the increase in poverty around the world and within Canada, we’re going to see a lot more of this exploitation happening,” says Barbara Gosse, the former CEO of the Canadian Centre to End Human Trafficking, and executive director of Trellis Canada, a national not-for-profit looking to improve government policy surrounding modern day slavery. “Individuals who are extremely poor and are living in subsistence are doing whatever they can and they are at a higher risk of exploitation in that case.”

Pandemic recovery, both in our public health system and our economic one, has been front and centre throughout the federal election campaign. Yet, the leaders of each main political party have avoided any discussion about their plans to address the increase in exploitation that COVID has indirectly created — this increase could be masked by the lack of attention paid by law enforcement sidelined by the pandemic, and the inability of the public to report cases. 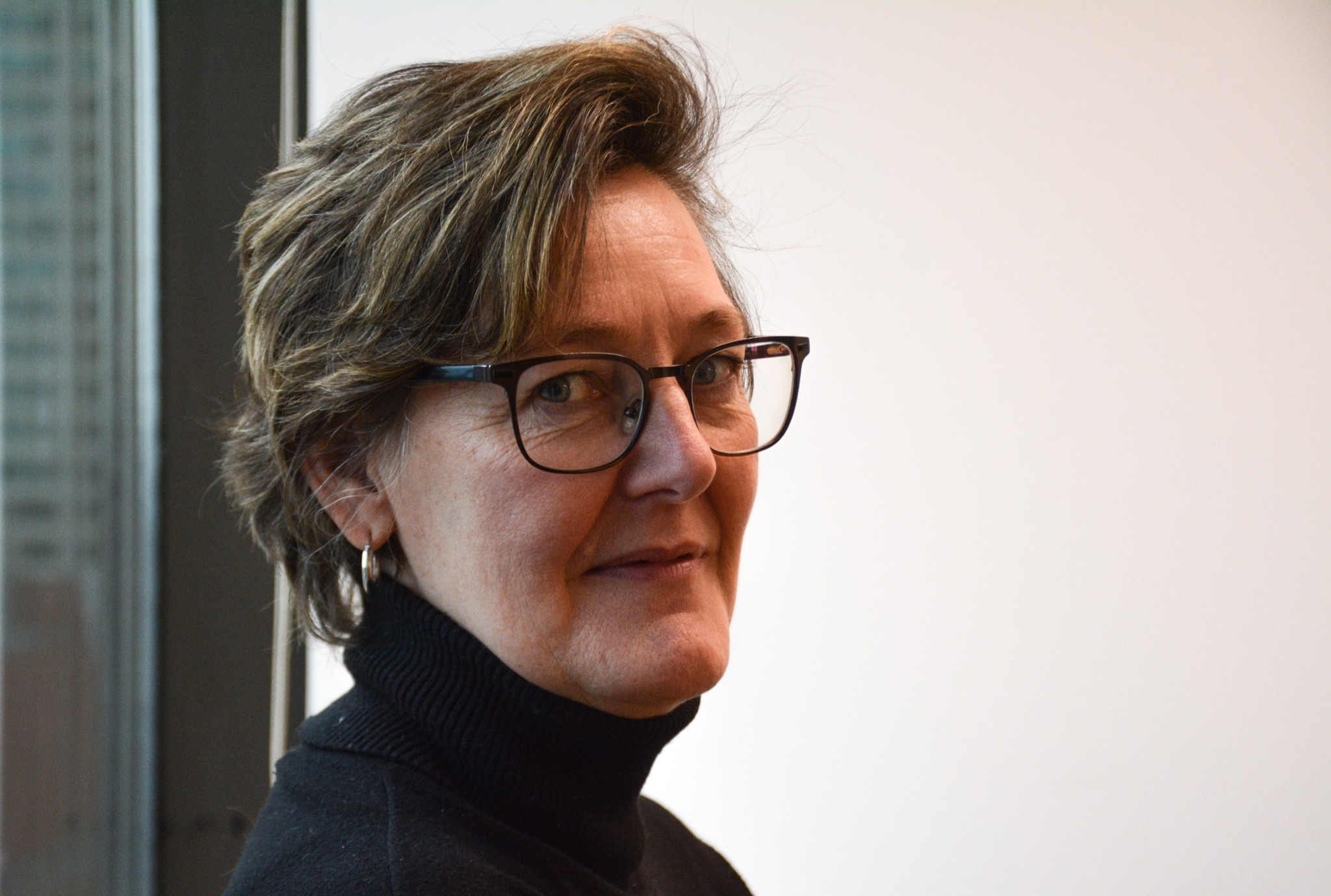 Barbara Gosse, the former CEO of the Canadian Centre to End Human Trafficking, believes exploitation has increased during the pandemic, and will more than likely continue unless action is taken.

Prior to the pandemic, Canada did not have proper mechanisms in place to measure the true scale of trafficking in the country, and with the UN reporting that cases are likely on the rise, these types of mechanisms will be critical for a government to capture a full picture of the current situation in order to dissect it and apply pressure in the right places. Canada has known for over a decade that its data measurement systems on human trafficking are inadequate, yet successive governments have done nothing about it. None of this has been discussed on the campaign trail.

No comprehensive plan to address human trafficking is found in the platforms of Canada’s three big political parties. Whether it’s forced labour, or sex trafficking, both require significant attention and action from government to effectively halt these deeply traumatic practices.

The Liberal party mentions the topic only once, to say it “clamped down” on the crime — to their credit, they did approve a new national strategy to address human trafficking in 2019, though progress on many of its initiatives has been slow. The Conservatives have plans to create harsher penalties for traffickers — something the United States Department of Justice has been recommending for several years — including the removal of requirements that fear or intimidation must be proven in court in order to successfully prosecute trafficking charges, a very difficult task; and amending the Criminal Code to ensure traffickers serve consecutive sentences for multiple human trafficking offences. Human trafficking does not appear in the NDP platform.

There is no mention of improving data collection to improve government response to both sex and labour trafficking.

As the UN report stated, any data received during the pandemic is skewed by lockdown restrictions and compromised reporting mechanisms.

Canada’s data collection was insufficient prior to COVID and with more vulnerable victims and traffickers expanding their tools and trafficking routes, the need to understand the true extent of this crime is more important than ever.

For years, the United States Department of Justice has been telling Canada to get its act together. The country needs to “continue efforts to improve trafficking data collection; and strengthen coordination among national and provincial governments on law enforcement and victim services,” reads the department’s Trafficking in Persons report from 2011.

The very same was mentioned in the 2021 report published in June.

“Although the government meets the minimum standards, it did not provide comprehensive data on investigations, prosecutions, and convictions during the reporting period or on victims provided with services nationwide,” the document reads. “The government’s efforts to identify victims, provide protections to all victims—particularly forced labor victims—and investigate and prosecute forced labor crimes, remained inadequate.”

In Canada, police-reported cases of human trafficking increased steadily between 2010 and 2019 rising from less than 50 to more than 500. Ontario accounted for 62 percent of the country’s human trafficking cases in 2019, and many of these cases have roots in the Region of Peel, which has been a nexus for traffickers for many years due to its location near major highways and the country’s largest airport. These police-reported numbers only provide a snapshot of the problem, as human trafficking is known to be vastly underreported. It’s something Statistics Canada noted in the report along with its 2019 data. 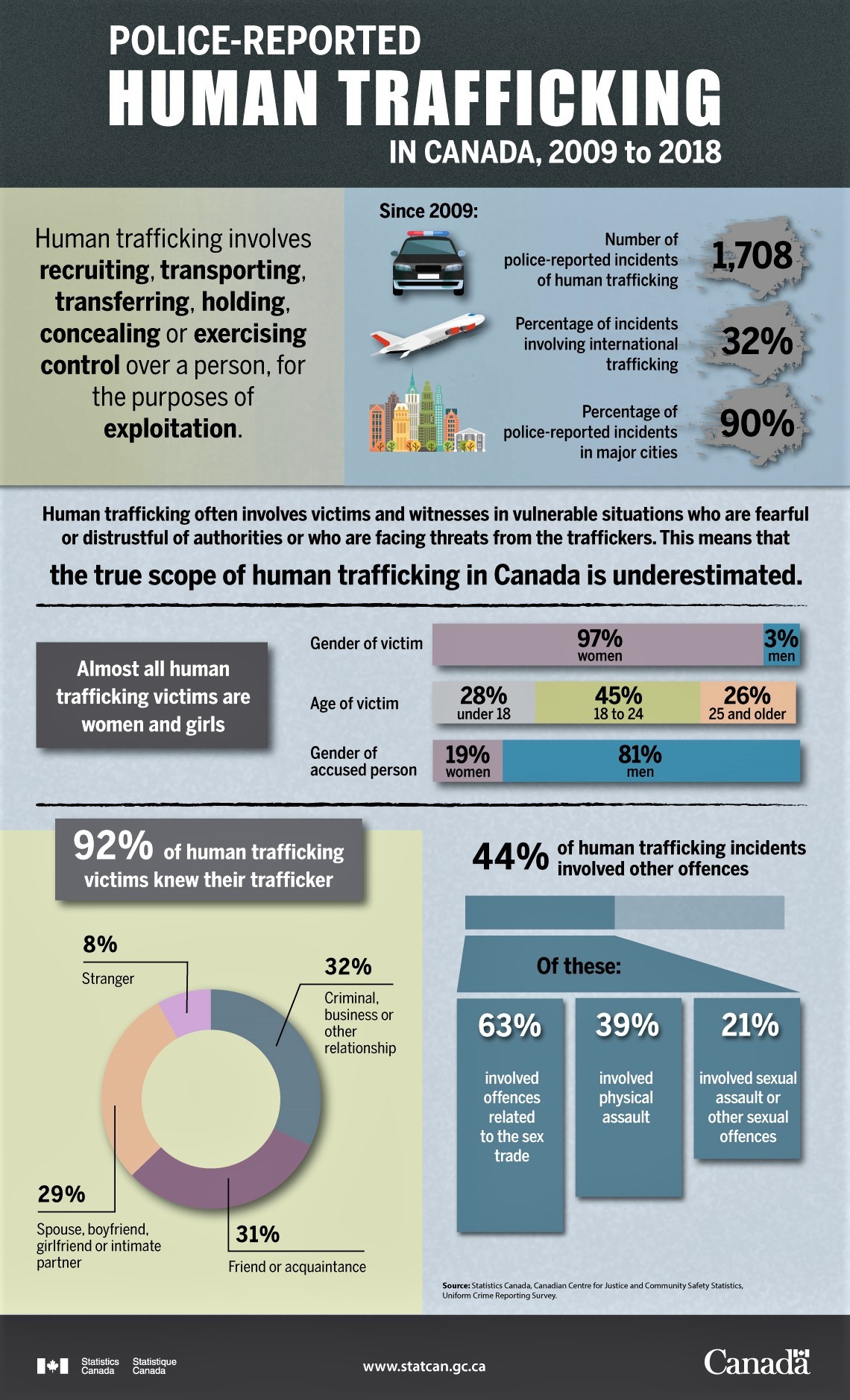 Human trafficking data from Statistics Canada only provides a small snapshot of the true scale of the crime.

“The hidden nature of this crime makes it difficult to detect and, as such, these data present an underestimation of its true magnitude,” the report states.

“Without data we’re really limited in understanding what the real picture is, where this is happening and what we can do about it,” Gosse says.

Both the Liberals and Conservatives promise to introduce legislation to ensure the Canadian government’s supply chains are free of forced labour. Canada is far behind on this, Gosse says, and not just on government supply chains, but those of many businesses currently importing goods into the country.

“Businesses are under absolutely no restrictions right now to eradicate forced labour or even sex trafficking or child labour from any of their supply chains,” Gosse says.

A Bill is currently before the Canadian Senate that would create a new system that forces companies to report measures being taken to eliminate forced labour from their supply chains, and create enforcement mechanisms to stop companies from importing goods suspected of being made with forced labour. However, even after its approval (the timeline is unknown), it could take a long time, possibly more than a year, to come into force. It means without a government committed to the issue of human trafficking, seriously, victims of forced labour and sex trafficking across the globe will continue to suffer.

It could take years for Canada to develop a system that functions adequately to meaningfully disrupt supply chains that rely on slave labour.

The United Kingdom’s Modern Slavery Act, viewed as precedent-setting when it was approved in 2015, created a system for companies to report measures they are taking to eliminate slave labour from all their business practices. In six years, it has not achieved much success.

“It is clear the UK Modern Slavery Act has failed in its stated intentions,” reads a February 2021 report analyzing the Act’s progress. “Despite six years of persistent non-compliance by two in five (40%) of companies, not one injunction or administrative penalty (such as exclusion from lucrative public procurement contracts) has been applied to a company for failing to report.”

The UK example shows that these new pieces of legislation take time to become effective tools to hold companies accountable. Gosse says Canadian lawmakers and politicians should be paying attention.

“What the legislators need to do is look at these reports, look at the reports that are coming out on the existing legislation that looked like it was going to do something, and let’s learn from that and let’s build something that will actually be effective,” she says.