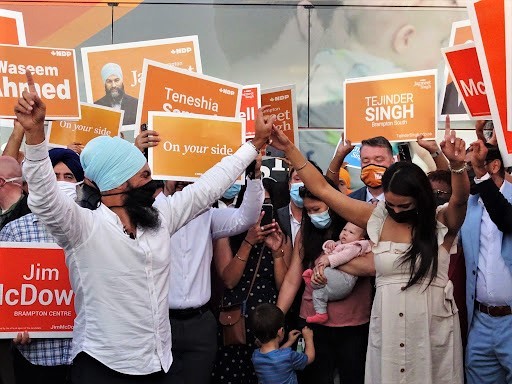 Singh feels the love in his adopted hometown but will Brampton finally deliver him a seat?

It’s a tag he played up in the 2019 federal election as he relentlessly, and unsuccessfully, targeted the city's five federal ridings. His younger brother Gurratan Singh is Brampton East’s MPP, the seat his big brother used to hold, when the future federal NDP leader got his start in politics.

This year, Singh has not paid as much attention to the Flower City on the campaign trail, as are the ways of party politics, driven by internal polling and spread sheets that dictate which ridings are in play and which can be bypassed.

On Wednesday he was back for the second time since kicking off his campaign, staying quiet about promises he failed to fulfill two years ago while he addressed his adopted hometown crowd.

But the city has not listened in the past, with two Liberal sweeps in a row, and a Conservative one before that, in 2011.

Singh obviously thinks Brampton East is in play this time around, after making a push for all five seats in 2019, when he visited the city a number of times and made direct promises for local investments, including his pledge for a new hospital. This campaign has been different. Not as many stops and no specific promises for his adopted hometown, where he still draws big crowds wherever he goes.

From the time he stepped off the bus to greet supporters little attention was paid to social distancing as people swarmed the magnetic Leader when he concluded his remarks. Singh enjoys celebrity status among Brampton’s huge Punjabi-Canadian community, which helped catapult him into the Ontario spotlight as the provincial NDP’s deputy leader, before he made the leap to the big stage, nationally. 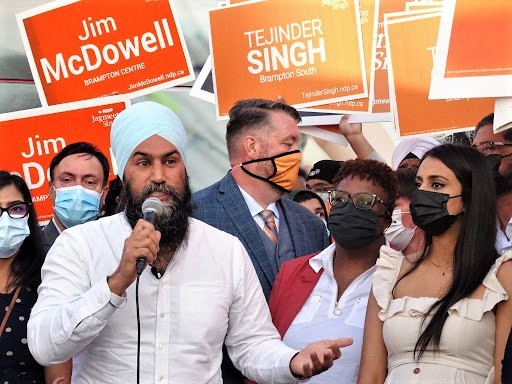 The Pointer asked Singh about his unfulfilled promise to bring a second full-service hospital to Brampton and why residents should vote for his party.

“The only way for it to happen is that they make us a government,” Singh replied. “If we're a new democratic government, we can deliver it.”

What will happen if he isn’t elected on Monday, he was asked. “We're gonna keep on fighting. We're never going to give up. We're going to keep on fighting for people. And if people want these changes, they have to vote for New Democrats.”

At the opening of his rally Singh spoke about his visit to Neskantaga First Nations in Northern Ontario. The remote surroundings and lack of funding from previous federal governments has left the people there without clean drinking water for over 25 years.

In his address Singh answered a frequently asked question by other members of the opposition and media on how he plans to pay for the infrastructure and universal pharmacare costs, and dental coverage he has promised. The NDP platform is widely viewed as having sharp spending increases for a range of promised programs, with few details on how they will be funded.

He repeated his well-worn, but cryptic campaign refrain.

“We're going to ask the billionaires, those at the very, very top, to start paying their fair share,” he said, as the crowd cheered the idea, which has few details about how exactly the rich will be targeted without causing a wide scale departure of the wealthy.

Singh has also pledged to make corporations pay more in taxes, to cover many of his ambitious plans for programs such as pharmacare, universal dental coverage, a national housing strategy and better childcare.

Brampton East, where Singh held the rally, has a gap that’s close to the polling margin of error between the NDP and Liberal frontrunner, incumbent Maninder Sidhu. NDP candidate Gail Bannister-Clarke is a well known figure in the community and is the current president of Peel’s local Elementary Teachers’ Federation of Ontario (ETFO) union.

According to an aggregation of polls, she sits at 32 percent support, trailing Sidhu’s 41 percent as of Thursday. Conservative Party of Canada (CPC) candidate Naval Bajaj was in third with 24 percent support. The NDP are in third in most of the other ten ridings across Brampton and Mississauga, according to polling aggregator 338Canada.com. 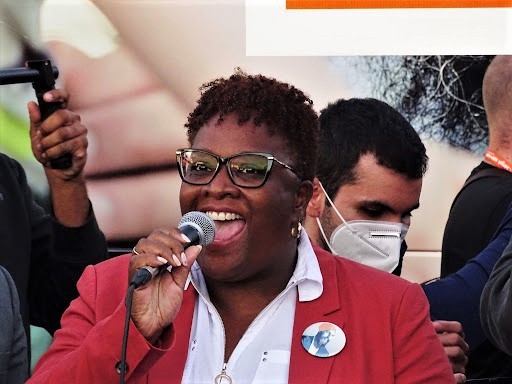 In 2019, Singh promised the NDP would bring a second hospital to Brampton, something he campaigned aggressively on.

“We are committed to building a new hospital in Brampton,” the NDP Leader said at a 2019 campaign rally in the city, which has been in a healthcare crisis even before his time as a local MPP.

Singh has been asked numerous times during the campaign how he would provide funding for specific projects and programs that are currently under the jurisdiction of the provinces, and he has responded vaguely that a good leader will always find a way.

While a federal NDP government could provide enhanced funding generally through the national health transfer, the provincial government, under current legislation, determines how it will spend that money.

As has been reported extensively, Brampton is in desperate need of more hospital beds, but voters will have to take a chance on Singh and his five local candidates to find out if they would make good on his earlier promise to bring another badly needed hospital to the city where he cut his political teeth.