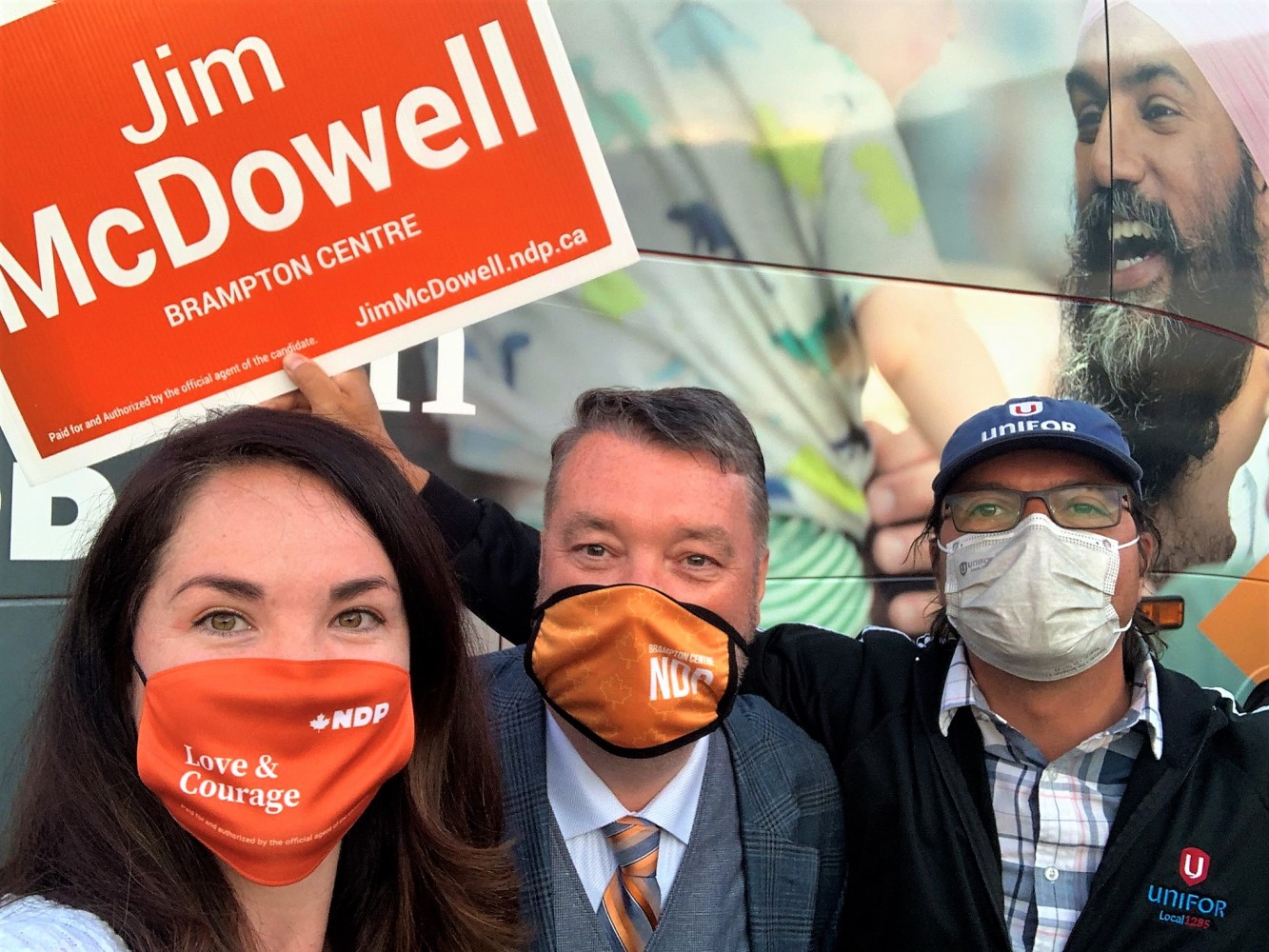 For most of his political career Jim McDowell has been behind the scenes.

A loyal staffer who helped other promising politicians spread their message across ridings, this year, it’s his name on the ballot box and his face on the big orange signs.

The NDP candidate for Brampton Centre has deep ties to politics and the party, recruited this year by none other than Gurratan Singh—federal NDP Leader Jagmeet Singh’s younger brother, and the NDP MPP for Brampton East.

McDowell’s relationship with the brothers goes back to when he was a staffer on Jagmeet’s provincial campaign for Bramalea-Gore-Malton in 2011 (which later became part of the recently created Brampton East riding). The older Singh won a seat as an MPP in a tight race, with the help of McDowell. In the 44th federal election, Gurratan told McDowell he wanted him to be a part of team orange again. 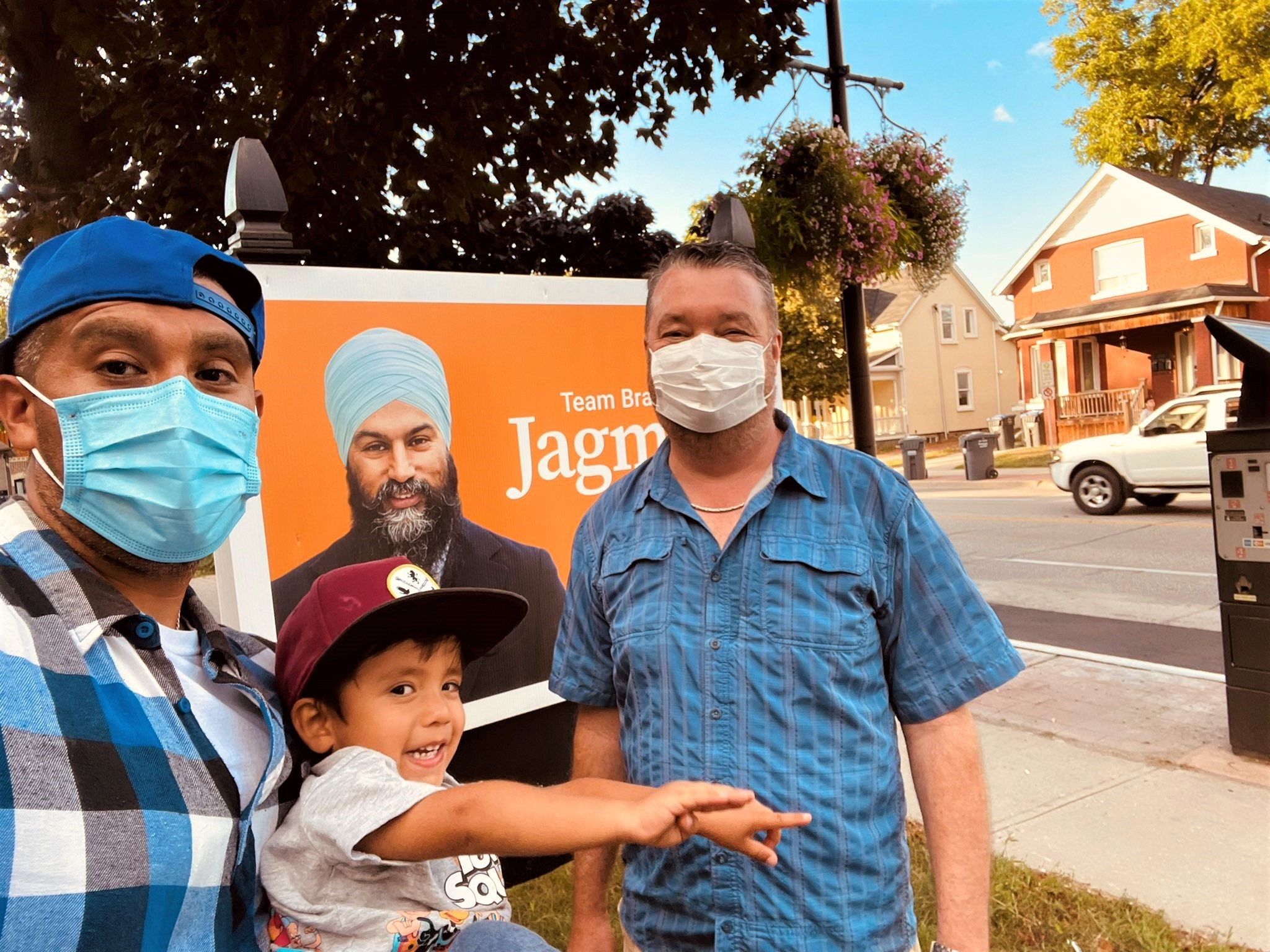 He is the former president of the Peel Region labour council and has been closely involved with the Brampton Health Coalition for more than 15 years, previously serving as its chair while fighting for the needs of his city. His experience with the group has fine tuned his priority for this election, as healthcare disparities between Brampton and other cities continue to grow.

“Brampton is reaching almost a million people now. And we have one hospital, which is totally underfunded,” McDowell told The Pointer.

He referenced the difference between Brampton and Sudbury, whose population is merely a fraction of the Flower City but has three hospitals to Brampton’s one. Even when Brampton Civic Hospital first opened in 2007, it was unable to provide for the population. The hospital opened with fewer beds than needed while simultaneously Peel Memorial was closed, leaving the exploding city with just one option for families in need of acute care.

Horror stories of patients being treated in the hallway of Civic with no privacy and hours after being admitted continue to emerge from the city’s lone hospital, which is chronically over capacity. The current wait time at Brampton Civic for someone who is admitted from the emergency department is 20 hours, two-and-a-half-times the provincial target. For years it has been operating with not enough beds and staff to support the country’s ninth largest city, while wait-times for patients have failed to even come close to standards set by the Province. Throughout the pandemic the already dire situation has been even worse.

The issue of inadequate healthcare funding in Brampton is not new, it’s been on-going since the early ‘90s. When McDowell ran for Brampton City Councillor in Wards 2 and 6, he knocked on thousands of doors and heard firsthand what families have suffered through.

“People were on the edge back in 2018. Now they feel that they're just about to fall over the edge there,” he said.

He spoke with residents of all ages who are living paycheque to paycheque in order to pay for medical expenses not covered by the government, while also struggling to pay rent.

McDowell said the pandemic has “intensified” the situation.

The healthcare disparity hit close to home when McDowell’s mother was diagnosed with lung cancer and passed away within three months. Until Christmas 2015, a spot on her lung was being monitored closely but was not being treated, then the cancer spread rapidly throughout her entire body.

“How is it possible that our medical system is so incapable of actually diagnosing cancer to that extent?” McDowell asked.

He believes if they would have taken his mother to any other hospital than Brampton Civic, where doctors had more time to do a proper examination and monitor her, she might have had more of a chance to fight the disease.

Along with funding to get Brampton more hospitals, McDowell emphasized his commitment to fight for the NDP’s pledge to create a national pharmacare program, and provide universal dental coverage as well as widely expanded mental health support. The pressure he sees on families financially, compounded by the ongoing pandemic, causes heightened anxiety which in turn can create long-term mental health issues.

“I was talking to this one woman, she has three jobs. Her husband was laid off, just after the pandemic happened. He's dealing with, with some severe depression, and their daughter was bullied in school,” McDowell said. “And she has mental health issues as well. And they don't have the ability to access the mental health care system in this country.”

Some children in Peel have to wait seven months before seeing a mental health professional. Many residents go to the already gridlocked emergency department at Civic, to stop from hurting themselves.

The Canadian Mental Health Association’s Peel-Dufferin branch is one of the lowest funded in the province. It receives about a third of what other sister agencies in the province get per capita. The Central West Local Health Integration Network (LHIN), which includes Brampton, receives $66 per capita from the provincial government for mental health and addictions support, well below the Ontario average of $107 per capita.

COVID-19 and the effects on frontline workers is also top of mind this election for McDowell and the residents of Brampton Centre. A close friend of his passed away after contracting the virus. He was a bus driver who drove a local route along Steeles Avenue.

McDowell believes the protection of frontline workers like his friend has been ignored, and must be a priority for the next federal government.

If elected he would work closely with current Member of Provincial Parliament Sara Singh to assist communication between the two tiers of government. He also promises to host regular town hall meetings to speak with citizens and keep their day-to-day situation at the forefront of policy decisions, both short and long-term.

McDowell said constituents come before party loyalty and even his own personal beliefs.

“The only way we can truly have proper implementation is with the conversations that we have with the residents of Brampton Centre,” McDowell said. “Because I don't know exactly what people are faced with until we actually start speaking to them.”

The NDP candidate emphasized to The Pointer just how important this election is. For him, he’s seen and met the people on the edge of poverty and knows action must be taken to help them, as the pandemic has created an unprecedented situation for many Brampton residents. McDowell said, “Please vote for me, please vote for the NDP, but please get out and vote.”