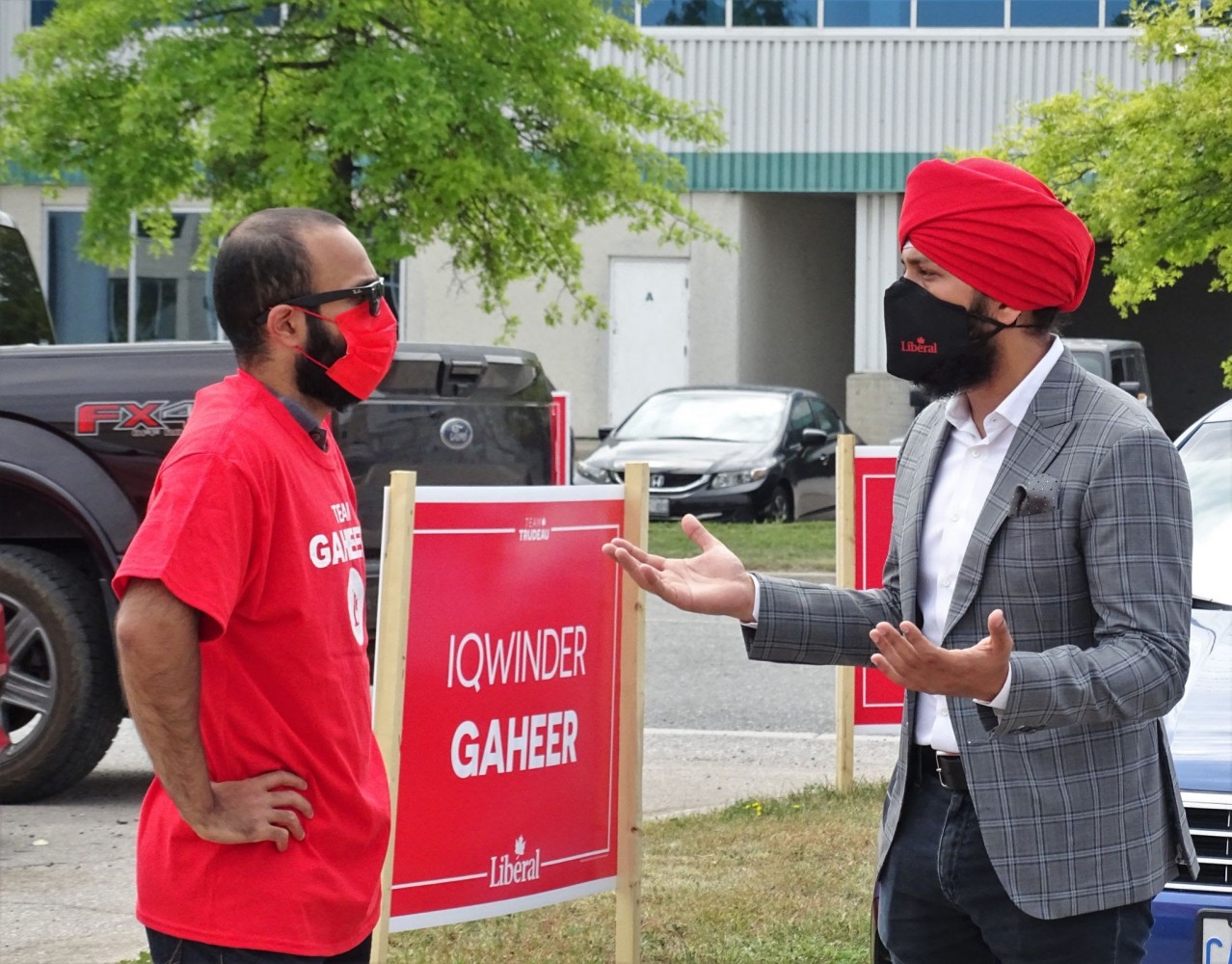 The stifling humid heatwave that blanketed Southern Ontario did not deter the supporters of Iqwinder Gaheer at his campaign launch party in late August.

Instead of trapped moisture, excitement was felt in the air for the young Liberal candidate hoping to represent the riding of Mississauga—Malton. From rambunctious kids, to high school students and those among older generations, they came together for what felt more like a backyard barbeque than a campaign launch.

Gaheer floated around the parking lot of his campaign headquarters in his riding, speaking with constituents and listening to their concerns. Overhead, low flying planes landing and taking off at Toronto Pearson International Airport momentarily interrupted conversations before the chatter resumed.

Of the many concerns for residents ahead of the September 20 election, affordable housing was by far mentioned most often at Gaheer’s event. The rising cost of food, gas and housing across the country has left many residents concerned about their future and that of their children.

In Peel, any form of housing is expensive; rent and property ownership are currently both out of reach for about 80 percent of the region’s residents, according to a recent report by the Region of Peel, leaving many in precarious situations. The 2020 Regional report on the 10-year Peel Housing and Homelessness Plan (2018-2028) revealed rapidly climbing rental prices in Mississauga and Brampton are unaffordable for many residents who need stable housing most, with children and other family members facing the ripple effects of precarious living situations.

The Region’s centralized waitlist exploded over 2020 and had grown to 22,445 households waiting for subsidies to secure proper housing. It was a huge jump from the 14,997 households on the list at the end of 2019, illustrating just how damaging the pandemic has been on the economic reality for thousands of families.

Instead of the streets many people also turn to unsafe basement suites or other forms of illegal housing to keep a roof over their heads. Estimates on the number of illegal basement units in Mississauga put the figure at about 33,000. They offer the bare necessities for people looking to make their tight budgets work, but often put tenants in harm’s way, with a host of fire code and other building requirements ignored by landlords who don’t play by the rules.

Being a young millennial, Gaheer knows he must tackle the housing crisis. 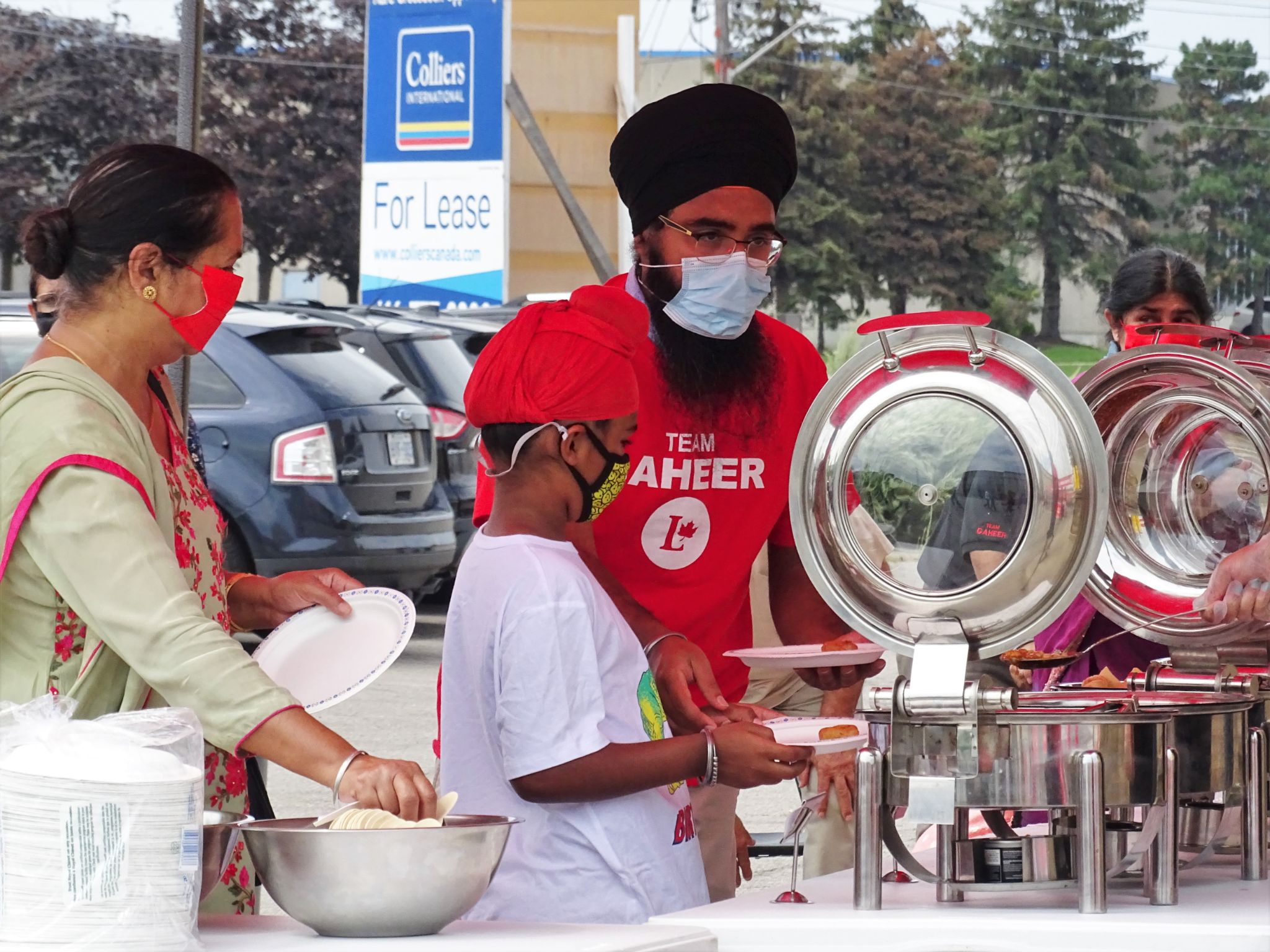 Punjabi food was provided at Gaheer’s launch party and helped create an intimate atmosphere for guests.

Spending his nights door-knocking, Gaheer knows child care and climate change are pressing concerns for many of his fellow Mississaugans. His riding had a median age of 36.9, according to the 2016 census, and the 28-year-old says many of the same concerns among younger residents resonate with him.

“There are lots of kids, lots of young families, we're meeting them as we go door knocking. So the Liberal policy is to bring childcare down to $10 a day, within five years,” Gaheer said.

When asked how he is qualified to represent his riding in Ottawa, as a member of Parliament, Gaheer said he knows the community and its needs intimately.

Like many of the residents within the North Mississauga riding, Gaheer is an immigrant, whose parents sought to move to Canada for a better life. His father emigrated to Canada in 1992, from a small village in Punjab, the northwestern Indian state that is home to a large Sikh population, the faith Gaheer practices.

“If I'm being very clear, we're actually from a very poor family.”

Speaking about his upbringing, he explained how his father never had the chance to pursue higher education and was denied good job opportunities in India. Hoping for a fresh start, his father left for Canada, merely months before Gaheer was born.

“I met him for the first time in Pearson Airport when I was six-years-old,” Gaheer told The Pointer. “I still vividly remember that incident, the elevator doors opened for the first time, and this stranger came running at me. And he hugged me tightly, and I sort of started crying a little bit, because I don't know who this person was.”

The reason Gaheer entered the political fray, seeking out his riding’s nomination, was so he could give back to the community, he said. Without the opportunities Canada presented to his father, Gaheer said he wouldn’t be where he is today. There was never a plan to become a Liberal candidate, but now he wants to showcase his passion.

When long-time Mississauga—Malton Liberal MP Navdeep Bains decided not to run again, Gaheer threw his name into the ring, and it is widely believed Bains helped him secure the nomination.

“We always had this deep passion towards this country, a deep loyalty. And the idea that was always in our heads: if there's ever a chance where we can give back to the community, where we can contribute to Canadian society in any way, shape, or form then we're going to take and we're going to jump,” he said.

The hometown boy from Mississauga—Malton is hoping the connections he’s made throughout his entire life will be a big help in the race.

Gaheer attended Bramalea Secondary School and pursued a Bachelor of Business Administration from the Schulich School of Business at York University. He then graduated from Harvard Law School where he received his Juris Doctorate in 2019.

Over the past few years Gaheer has been practicing as a lawyer, at Kirkland & Ellis LLP and as a summer student at Blake, Cassels & Graydon LLP in Toronto.

Since the redistribution of ridings in 2012, Mississauga—Malton has belonged to the Liberals under Bains. In 2015 and 2019, the former cabinet minister won the seat with 59 percent and 57.5 percent of the vote respectively.

If Gaheer wins, he will represent one of the most immigrant-rich ridings in Canada, as Malton has seen massive demographic shifts over the last 30 years, with a huge influx of immigrants and many challenges, such as large numbers of residents who work in essential jobs, without proper labour protections in Ontario, such as a lack of paid sick days.

Malton is cut off from the rest of Mississauga because of its location just north of Pearson Airport and this has resulted in complaints about rising violent crime due to a lack of police presence. Other concerns, such as poor public transit access, have also been raised by residents.