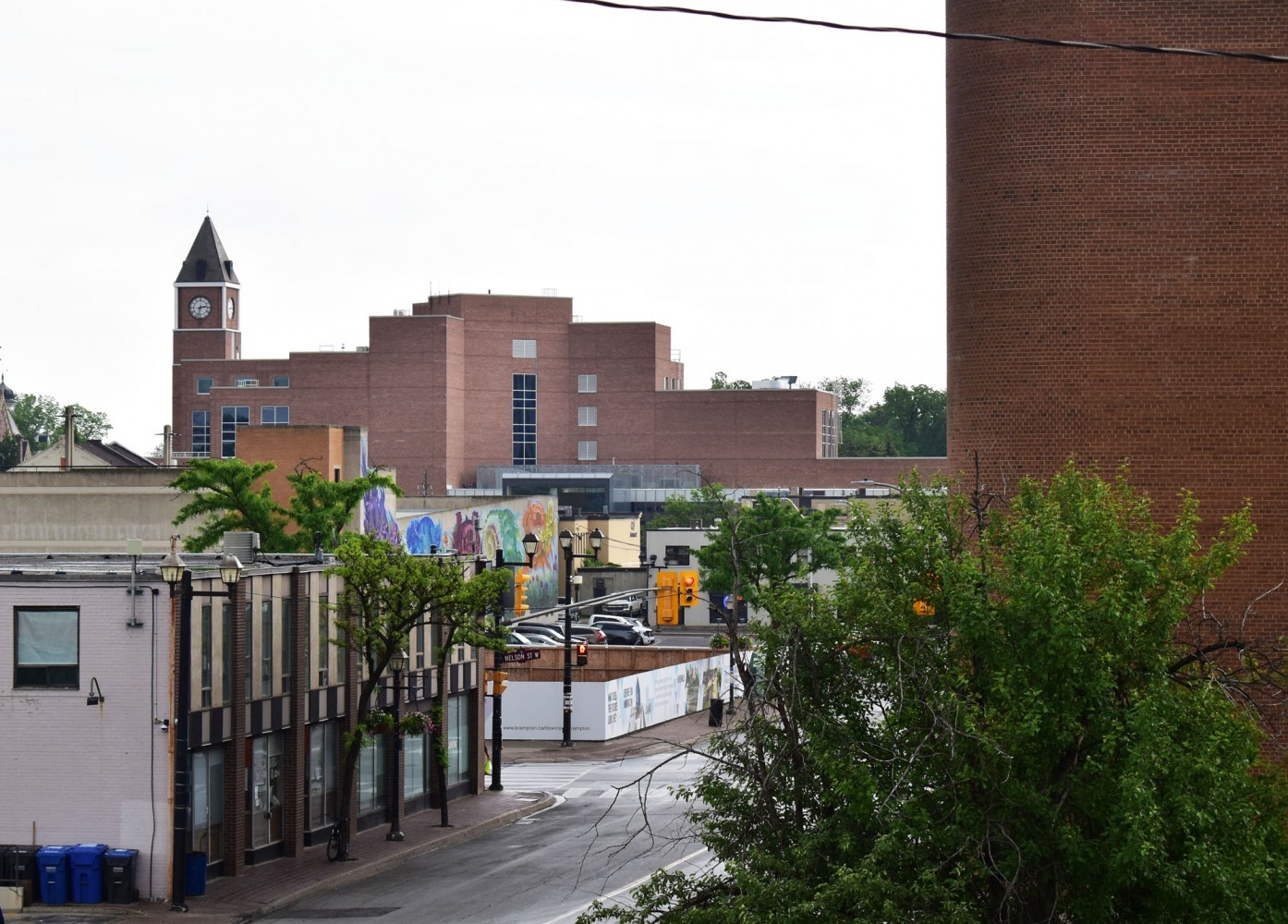 Anyone walking the streets of downtown Brampton this past spring would have been confused by the Christmas decorations still adorning the streetscape. Twinkle lights still clinging to trees and garland still wrapped around streetlamps months after the winter holiday had come and gone; a sign of just how long it can take for simple actions to be taken in the city’s downtown core.

“I have personally seen our small administration, Suzy (Godefroy) in particular, struggle and struggle to effect a task,” Rick Evans, secretary of the Downtown Brampton BIA, told City Council last week. The BIA is made up of local business owners and Godefroy serves as the executive director.

Evans said the BIA is usually successful in communicating with different City departments and receives full cooperation. However, the disjointed process of working with multiple city departments can make it difficult to bring complex ideas to fruition.

Godefroy and Evans have made several delegations to Council in recent months advocating for stronger support from the City, citing the gauntlet of upcoming projects proposed in the Integrated Downtown Plan (IDP), that will disrupt local businesses with construction delays and closures for years down the road.

The IDP, introduced through the 2021 budget and described as an “overarching policy approach” by the City, includes infrastructure upgrades, urban design improvements, and the creation of new programs, which the City officials hope will lead to employment opportunities, enhanced public spaces and the consideration of future transit projects. The downtown will also see future disruption from construction of the Hurontario LRT extension, along with the work on the Riverwalk project to eliminate the downtown flood risk. The IDP replaced the Downtown Reimagined plan, which involved overhauling streetscapes, widening sidewalks, adding bike lanes and replacing regional water and sewer lines in an effort to bring new life to Brampton’s aging downtown core. The project was put on the back burner in 2018 after Patrick Brown was elected as mayor. Work to revitalize downtown has been in turmoil ever since.

The work is desperately needed. The Region of Peel has wanted to replace the aging water and sewer infrastructure for years and approached the city about digging in and ripping out the old pipes back in January 2016.  The region plans to replace water mains, replace and insulate existing sanitary sewers, and install additional water mains, sanitary and storm sewers and utilities to accommodate future growth. 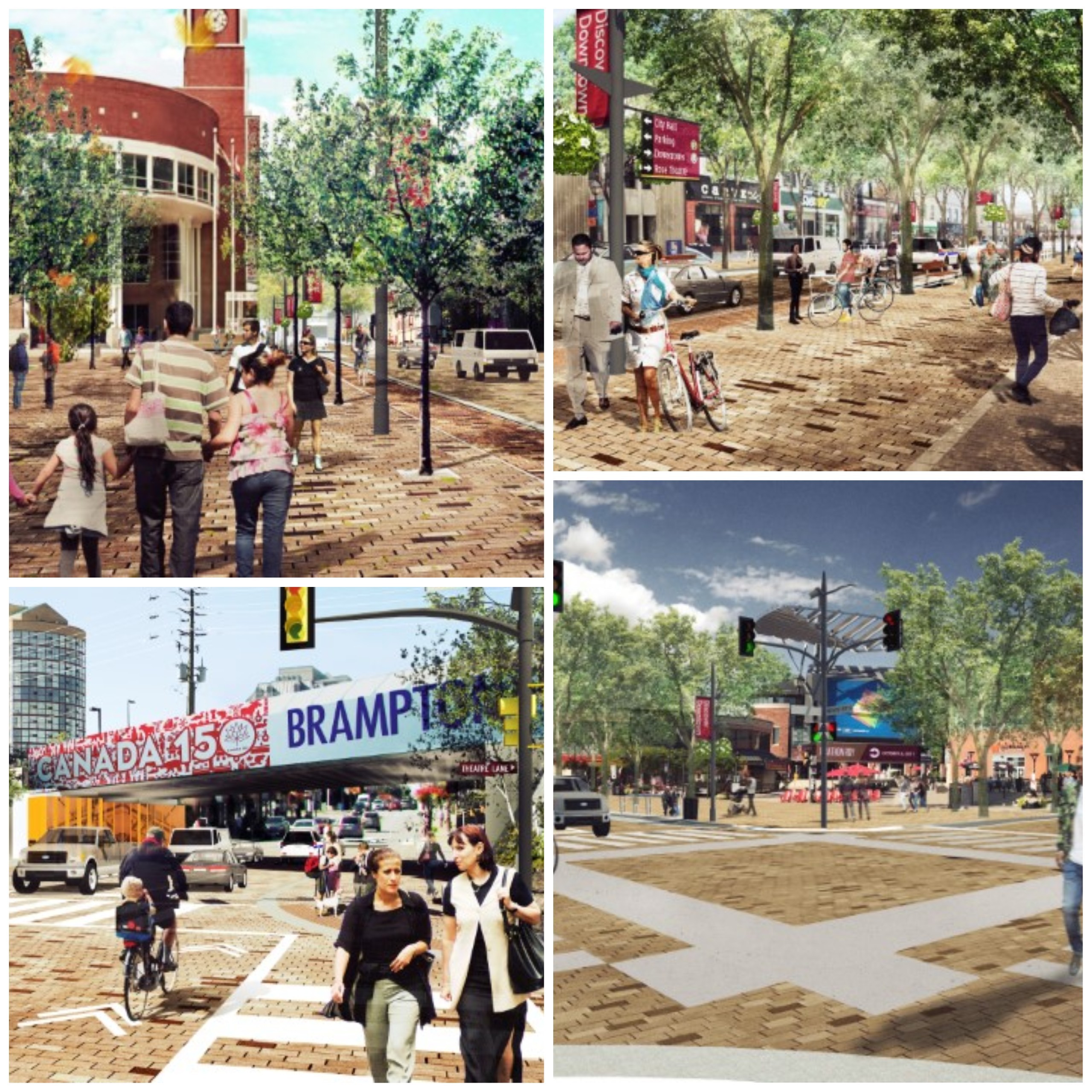 (Renderings from City of Brampton)

The water mains the Region is replacing are decades old. One section of pipes on Queen Street was installed between 1969 and 1970. Another section on Main Street dates back to 1995. Businesses are worried these pipes could burst at any minute, as they have in the past. In December 2017, a rupture on George Street caused surrounding businesses to shut down, left tens of thousands of dollars in damage and a residential unit had to be evacuated.

Despite the dire need for the work, it took the City until the 2021 budget deliberations to talk about new plans for downtown.

This shifting foundation has pushed the BIA to place improved coordination with the City high on its priority list. In response, the City is officially creating the Downtown Action Hub. A central office in the downtown area responsible for keeping residents, business owners, and other groups in the area up to date on the progress of projects, addressing concerns, and continuing the work of planning the future of downtown.

Approved by City Council last Wednesday, the hub will have six staff members, including a liaison from strategic communications that deals with the BIA directly, an inspector from the City’s public works and engineering department, along with two existing positions that have a central focus on the downtown area.

“The Downtown Brampton BIA has advocated to City Council and staff that this newly formed City of Brampton managed downtown office should streamline downtown projects, events and initiatives that are taking place in downtown by providing more efficient green tape solutions,” Godefroy told The Pointer.

A downtown coordinator and a principal planner will also be added. Bob Bjerke, the director of city planning and design, said these two positions currently exist with the City, but are contract positions and funding comes from the capital budget. Shifting them to full time positions will allow the City to have “the horse power to follow through,” he says.

Moving these positions to full time staff will cost the City approximately $266,000 per year.

City staff are also requesting two additional positions — a development officer who will work to attract new investment in the downtown and an additional planner — be added to the 2022 budget at a cost of $234,000 per year.

“I think it's hard to overestimate how busy (the) planning building economic development (department) is with the breadth of development coming in and to have resources to focus on the downtown we feel is a very important element,” Bjerke said.

He said the cost of these positions will be somewhat offset by potential “revenue” from development applications. This could come in the form of building permits or development charges: a cost developers pay to the City to help cover the cost of municipal services (such as roads, transit or wastewater) needed to support the new development.

With the final mandate of the Downtown Hub yet to be decided, there are no concrete plans for what the work in the office will look like. A group of stakeholders will be put together to guide the work, but details have not been provided to when this group will come together.

Not everyone welcomed the news with open arms after hearing the costs associated with the project.

Richard Solomon, owner of A1 fitness in downtown Brampton, questions how this office will be helpful to him and other businesses. An information centre was also opened when the City promoted plans for Downtown Reimagined.

He says instead of more paid staff, money should be provided to local businesses who will be financially impacted by the years of construction waiting on the horizon.

“What they're doing to downtown Brampton, it's about time, to be quite frank,” he said, acknowledging that the construction is a “necessary evil” to improve the city centre. That knowledge does not make it any easier for local businesses which are already struggling following a year of pandemic related lockdowns.

The unfortunate reality is if Mayor Brown and council had not cancelled the Downtown Reimagined work in 2018, the lion’s share of the work could have been done while businesses were shut down for the pandemic. Now, any construction that will rip up streets and close off sidewalks will happen just when residents are set to start spending money again.

Construction of the Eglinton Crosstown LRT in Toronto can serve as a case study to what the City can do to make things easier on Brampton business owners. While Toronto did not have a specific office, local BIAs worked with the community to initiate marketing initiatives that encouraged people to shop locally and support small businesses impacted by construction, similar to the work being planned for the streets of downtown Brampton.

Businesses in the area also asked for financial assistance, but haven’t received much help from the City of Toronto, outside of a small handful of initiatives, such as in 2018, when Mayor John Tory offered visitors in the area a parking discount. Despite these efforts, in February 2020, Toronto Councillor Mike Colle, said 100 small businesses closed since the work began in 2016.

“Money can be used better elsewhere all the time when it comes to paying people to sit in the room to talk to other people about how they can make money,” Solomon said. It’s unclear if the City will develop other plans to help businesses financially or offer any subsidies.

As a result of delaying critical work downtown, the City of Brampton is now staring down a much larger price tag to pay for it. Along with the costs of additional staff that will now go into the new Downtown Hub, the budget for the entirety of the revitalization work will continue to grow in the years to come.

The city initially budgeted about $30 million in “borrowed financing” for the project, which appeared to be more than enough to cover the cost of the project outlined in the environmental assessment, estimated at $23 million. However, responses to a request for proposals received by the Region of Peel in 2018 came in above the city’s budgeted amount, ranging from $55 million to $73 million. Under the previous joint contract with the region, the city would be solely responsible for $36 million to $45 million of that total, depending on which bidder was selected. Those dollar amounts have almost certainly gone up over the last three years.

A project ambassador to speak on the Region’s portion of construction, including the upcoming replacement of water and sewer mains, will also be present in the new Downtown Hub, along with staff for the recently approved Welcoming Streets Pilot Program. Both positions are funded by the Region of Peel. The Region is expected to replace water and sewer lines in September after original plans were put on hold as a result of delays with Brampton’s Downtown Reimagined project.

Brown attempted to postpone the project once again in May until plans for the Main Street LRT extension were finalized. The vote for the extension is at least another year away. Regional Council overruled, saying the decades old water and sewer lines desperately needed to be replaced.

Plans for revitalizing the rest of the Four Corners are expected to be presented to city council next month.