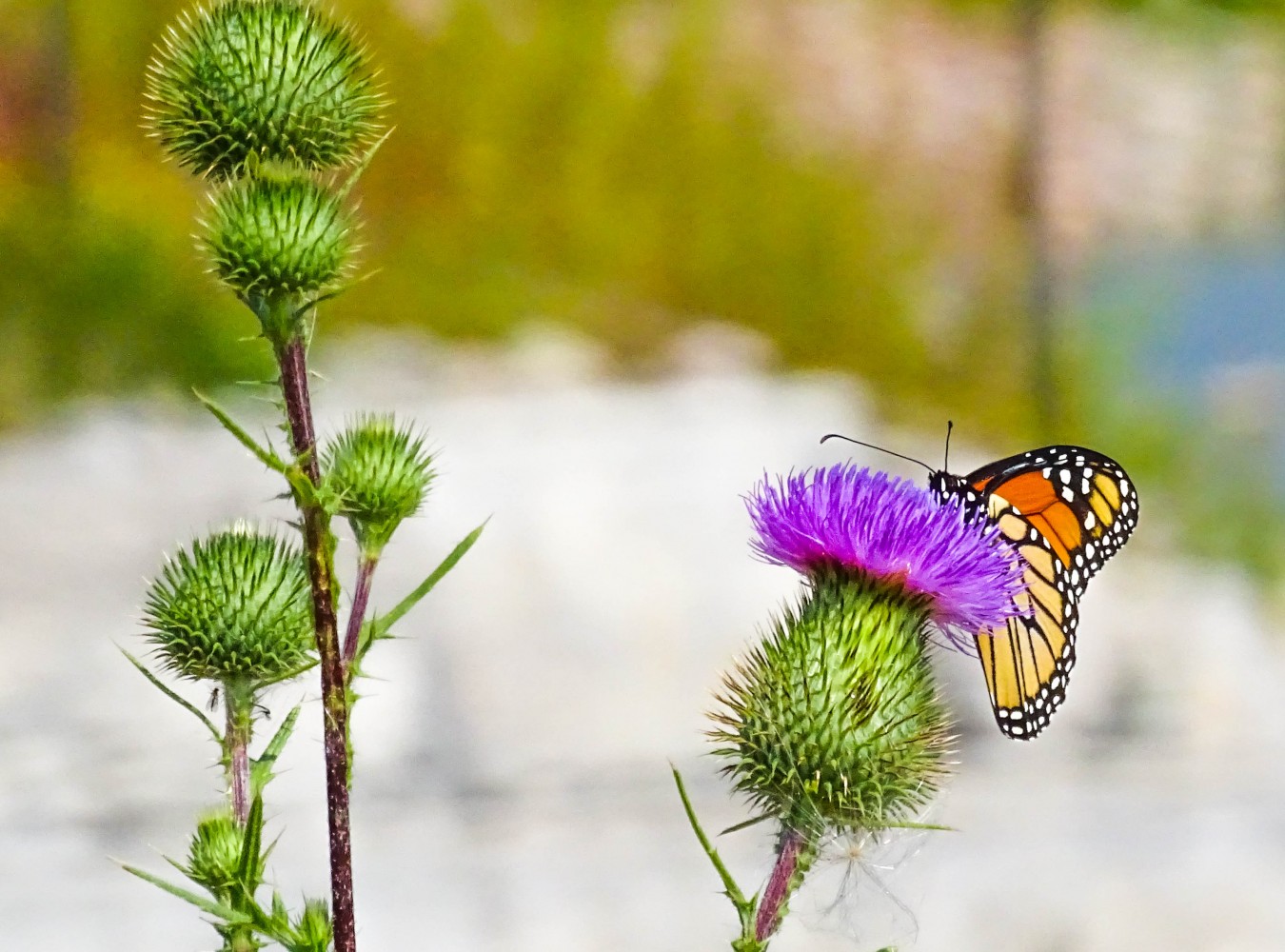 Bringing the ‘lake’ back to Lakeview: Jim Tovey’s conservation dream becoming a reality

There is an irony in naming the Mississauga neighbourhood, ‘Lakeview.’

Unless you are one of the elite few who owns a multimillion-dollar waterfront home, a view of the lake in Lakeview is non-existent.

Crossing Cawthra Road toward Etobicoke on Lakeshore Boulevard, a mix of small, aging local storefronts line both sides of the street. To the north, rows of homes, and a few post-war bungalows sit among the modern developments springing up around them.

To the south, tiny, tree-lined residential rows give way to industrial buildings the further east one travels.

The Jim Tovey conservation project is set to transform the area.

The massive lakeside development has been under construction since November 2016, and is planned to be completed between 2025 and 2026. Tentatively, the project is on target for a 2025 opening, and on budget, the City says.

The conservation project will extend the waterfront trail linking Marie Curtis Park to the Lakeview Community Partners project, via an environmentally friendly, manmade conservation area. When complete, the project will include multiple wetlands, a meadowfield and a forested area along the newly constructed 1.5 km of shoreline. 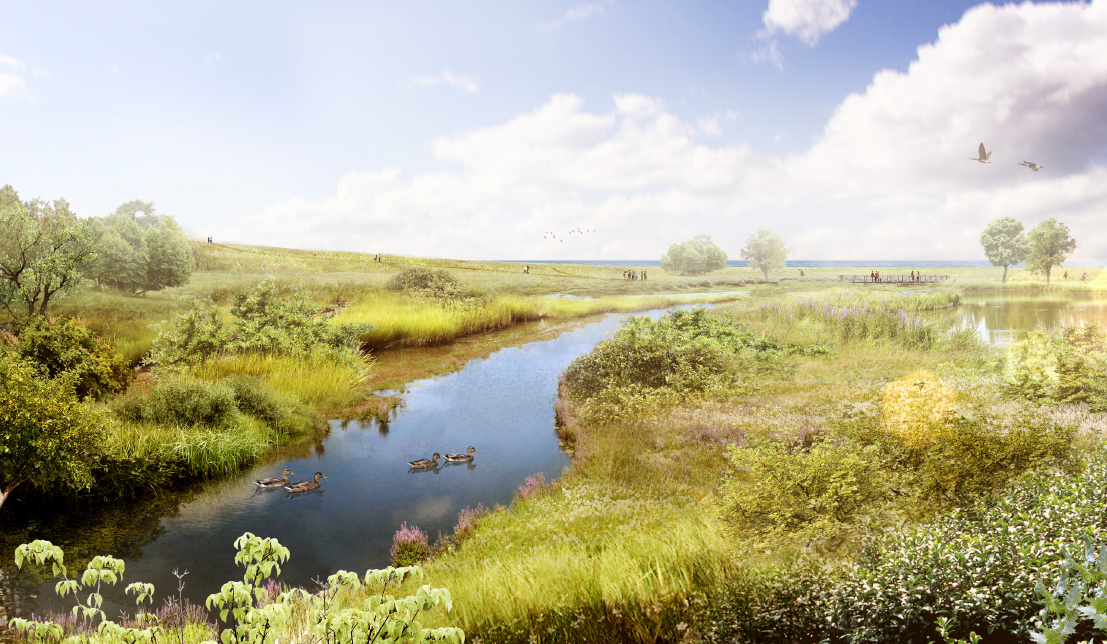 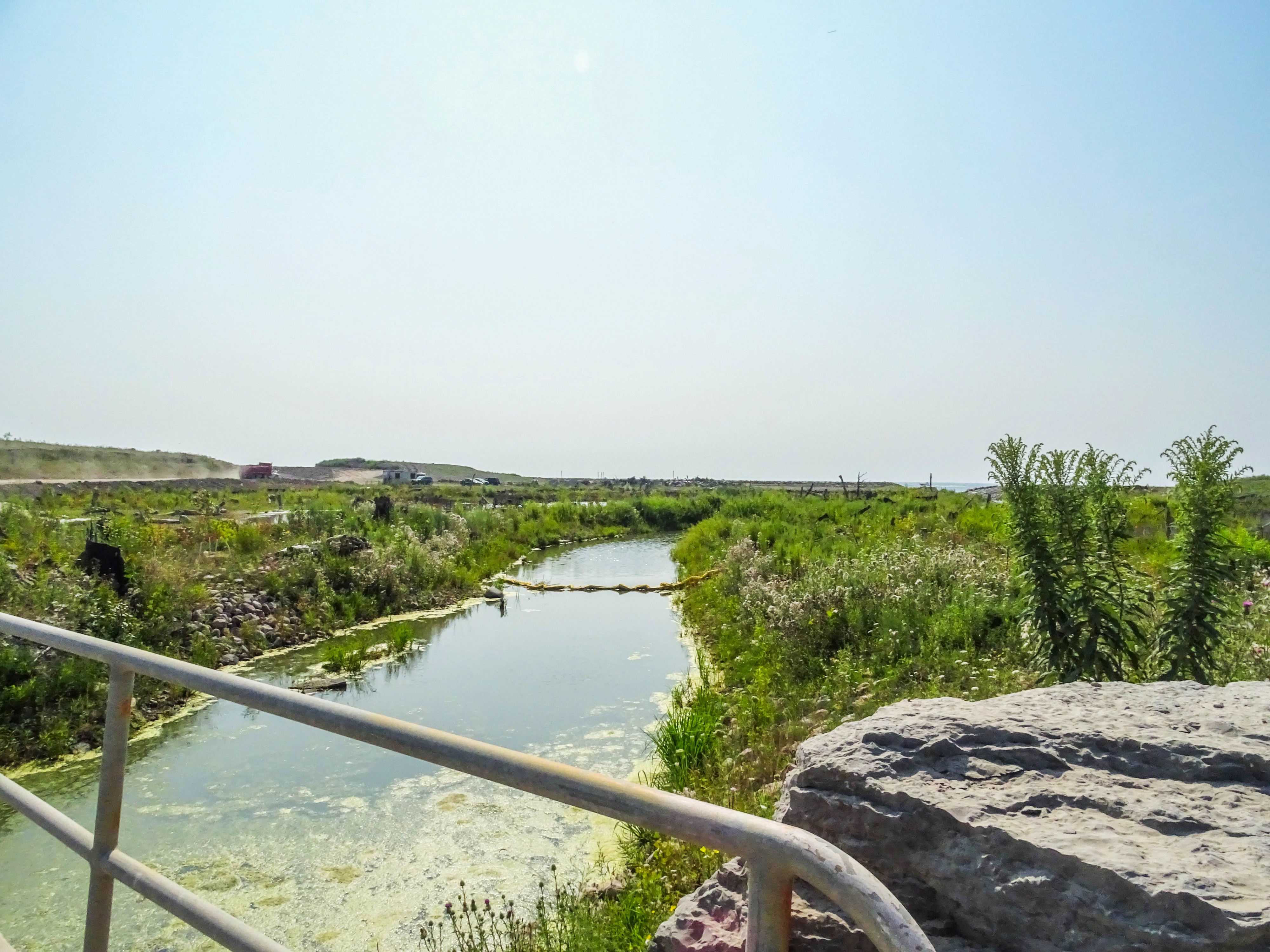 As work continues, a more complete picture of the Jim Tovey project is starting to emerge.

The G.E. Booth Wastewater Treatment Facility will operate quietly behind the natural oasis. Grassy knolls and trees will prevent traffic noise so residents may only be disturbed by the gentle waves lapping up against the rocks, or pedestrian chatter and bike bells.

The Region of Peel, along with the Toronto Region Conservation Authority (TRCA) and the Credit Valley Conservation Authority (CVC) have been working the last several years to bring this project to life. The TRCA is acting as the contractor, Peel the funder and CVC planting the ecology and owning the site once complete. The three bodies have worked hand-in-hand to bring the beautiful and unique dream to life.

The area is named after the late Ward 1 Councillor Jim Tovey, who passed away in January 2018. He was key in bringing this project, and the green vision for Lakeview, to fruition. After the Lakeview Generating Station was demolished in 2007, Tovey introduced an idea to residents to create a more accessible waterfront. Instead of erecting another industrial site, the former home of the Four Sisters power plant could be remediated into a neighborhood of mixed density homes.

The conservation area would be closely linked to the Lakeview development, giving those who live in the area intimate access to nature. A connection that more people have come to value after a year of pandemic lockdowns shuttered many other social activities aside from getting outside to enjoy our green spaces. 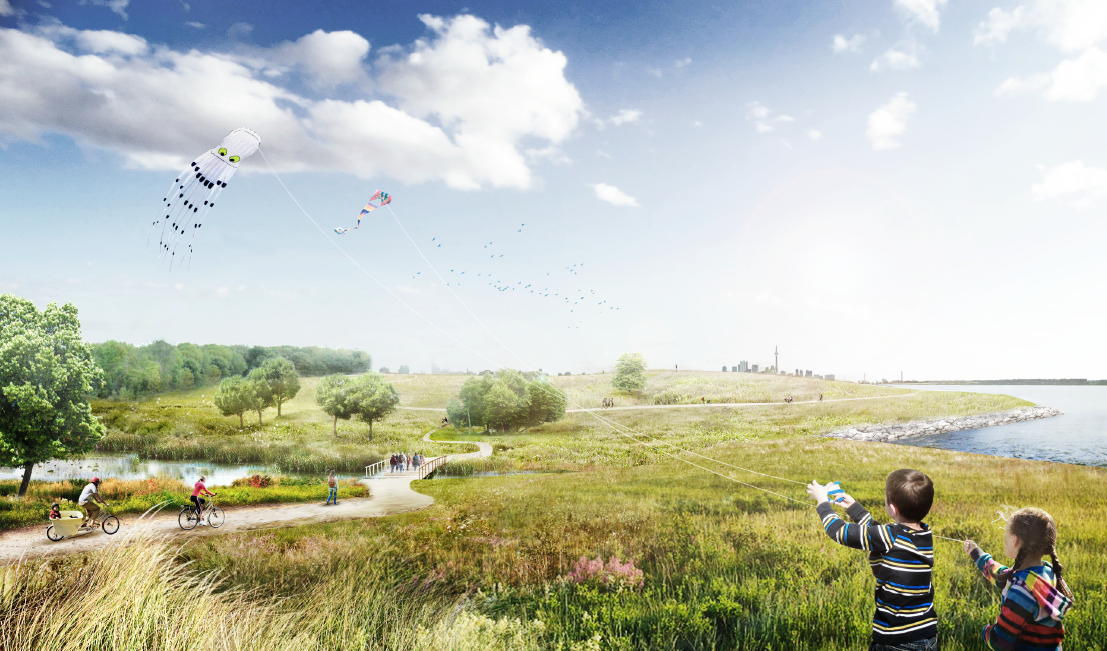 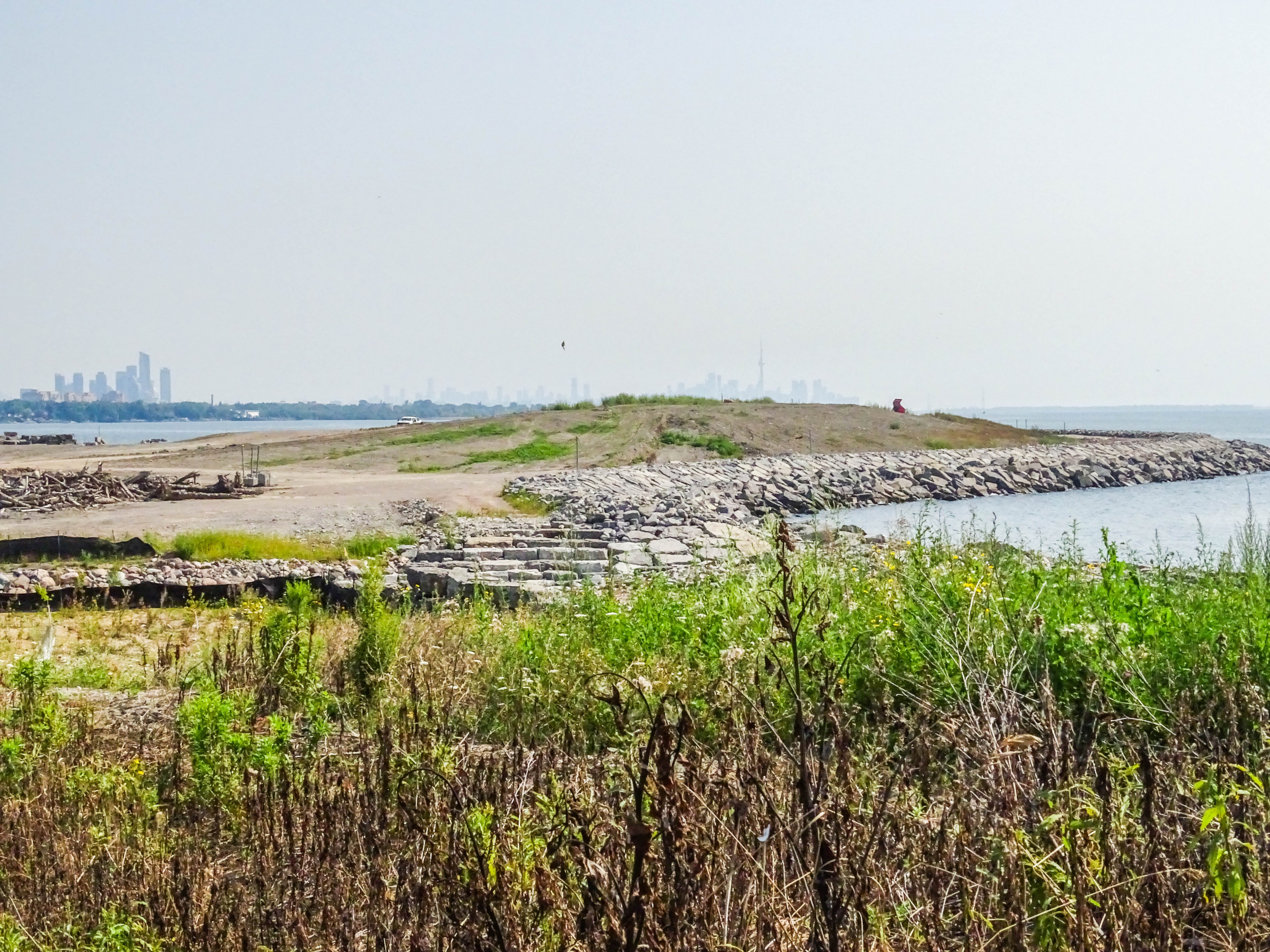 The new conservation area will be a critical habitat for animals and insects.

With the wastewater plant sitting directly on the shore of Lake Ontario, connecting the waterfront trail system and preventing the fragmentation of animal habitat, involved constructing a new spit of land off the existing shoreline.

“The process involves creating containment cells. So there's eight cells, and the cells are created out into the lake using concrete brick and rubble,” Jesse DeJager, CVC manager of capital projects and assets told The Pointer.

The materials to create the land are gathered from various City and Regional projects, mostly road and building construction. The materials are not harmful to the environment and create a solid layer for topsoil and trees. Each cell is varying in size and contain approximately 1.75 million cubic meters of concrete and other solid materials.

Every step of the project looks to address how best to sustain local wildlife and maximize access to the lake for those who live nearby. The majority of the area will be meadowland habitats, dedicated to migratory birds and insects who haven’t had a place to call home on this piece of shoreline for decades. Waterways and wetlands will create a home for spawning fish and other amphibians who continue to lose habitats to urbanization. A forest will wrap around the northern edge of the area to buffer the site from the wastewater facility and create homes for woodland creatures. 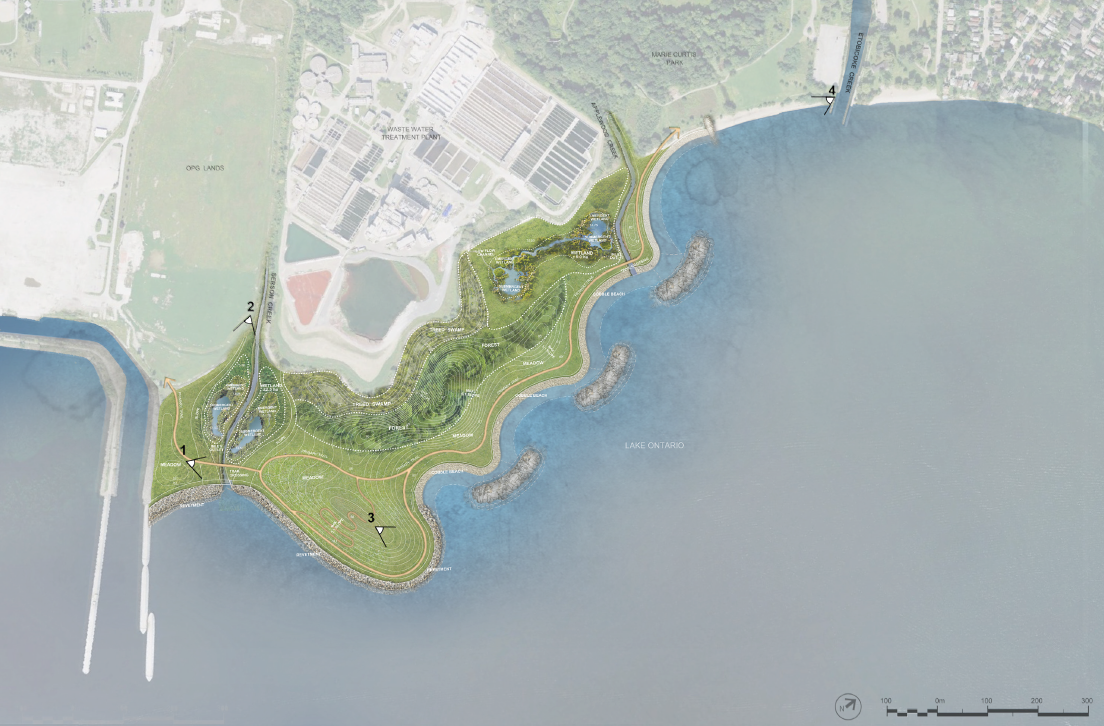 The new shoreline constructed for the conservation area.

(Rendering from City of Mississauga)

While the project has not crossed the finish line, the team working on the site is already seeing many forms of life come back to the shoreline.

“(It’s) kind of a field of dreams scenario, you build it, and they will come,” DeJager said.

Construction workers have spotted many different species of birds already flocking to the more mature areas of growth. Monarch butterflies and bumblebees — key pollinators in Ontario — have been seen flying from thistles and flowers, all the while microorganisms and seeds are doing their part in growing and developing the dusty roads into green escapes. 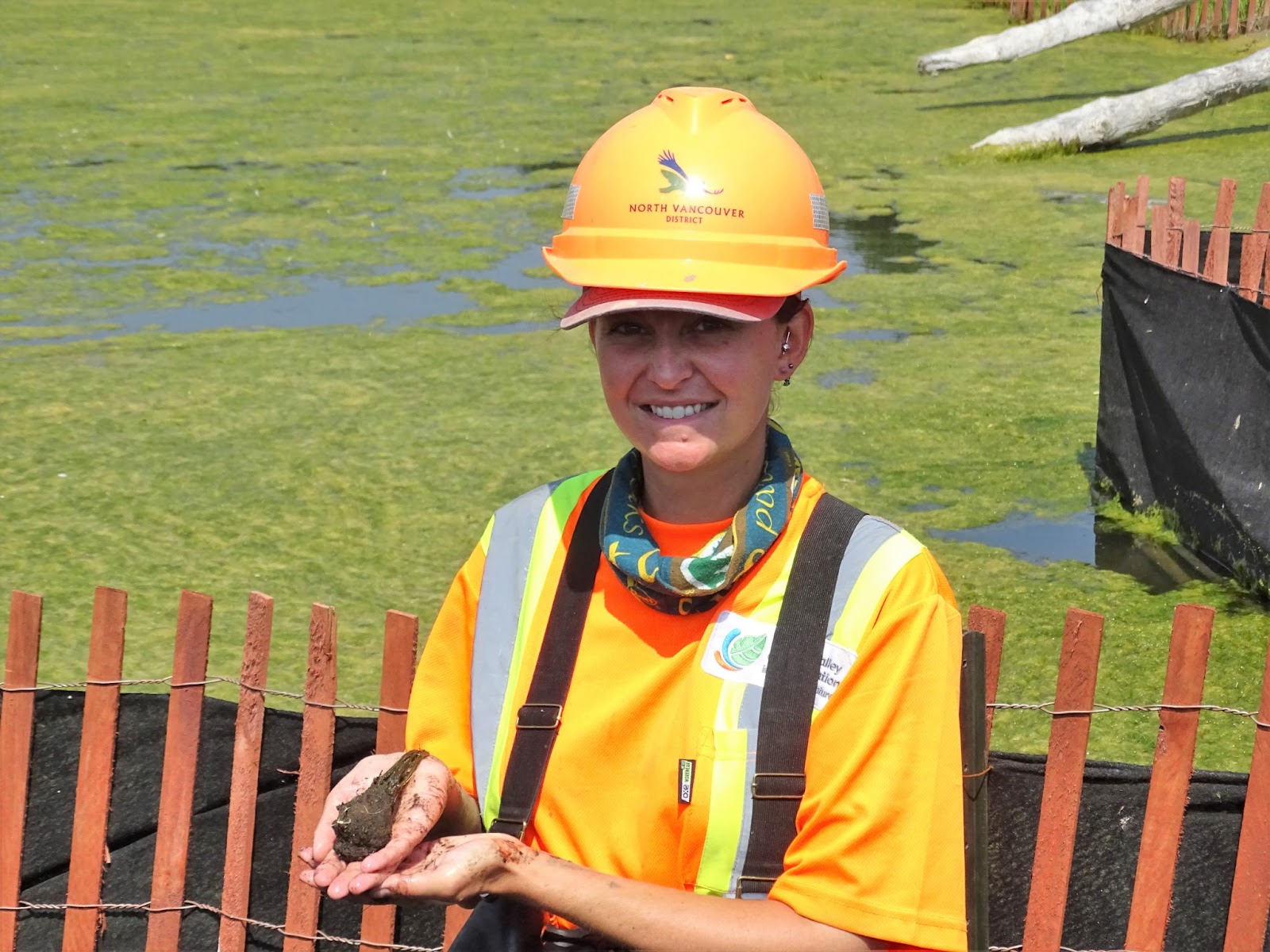 Michelle Hill, an assistant aquatic and restoration employee for CVC is helping the ecology of the wetland areas by nurturing specific plants.

For animals and insects, this new landmass will be a perfect area to thrive in a watershed that has numerous stresses as a result of its proximity to some of the GTA’s most hectic urban environments. To people, this nature reserve will offer the right amount of convenience while showcasing the raw beauty of the natural world.

In recent years the call to adapt our world with greener technologies and take care of Mother Earth has grown. People are more in tune with how urbanization and decisions from governments affect the environment, and in turn their own lives. The pandemic has increased the love for greenspaces and being outside, which has shown more people the devastating effects rapid, unchecked development can have on our local watersheds and ecosystems.

With a population of over 1.4 million — expected to grow to 2 million by 2041 — Peel has a large responsibility to make smart, sustainable decisions about how these newcomers will be housed and how they will interact with their cities. The decisions the Region makes today will affect future generations of residents.

Green projects and environmental groups are scattered across the Region. Ecosource, a Mississauga-based non-profit is spearheading community garden projects to allow residents to grow their own food.

Judy Oduro, urban agriculture assistant with Ecosource, says since 2020 she’s seen more people come out and volunteer their time in the garden. Since restrictions were limited to outdoor activities last summer, more people found unique ways to release stress and connect with the world around them. 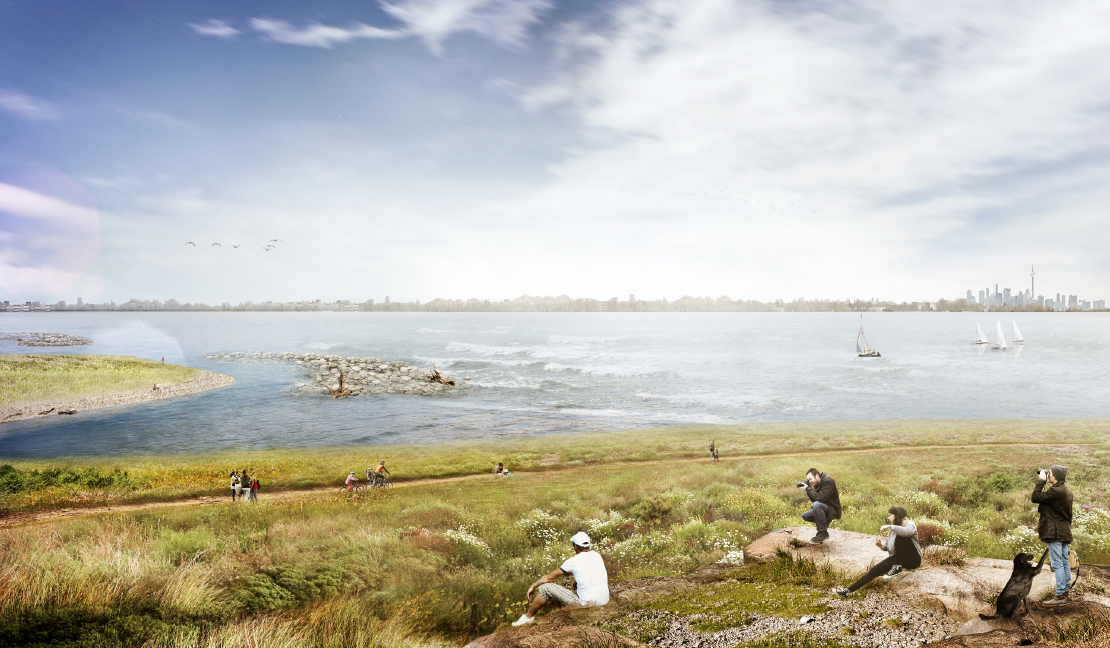 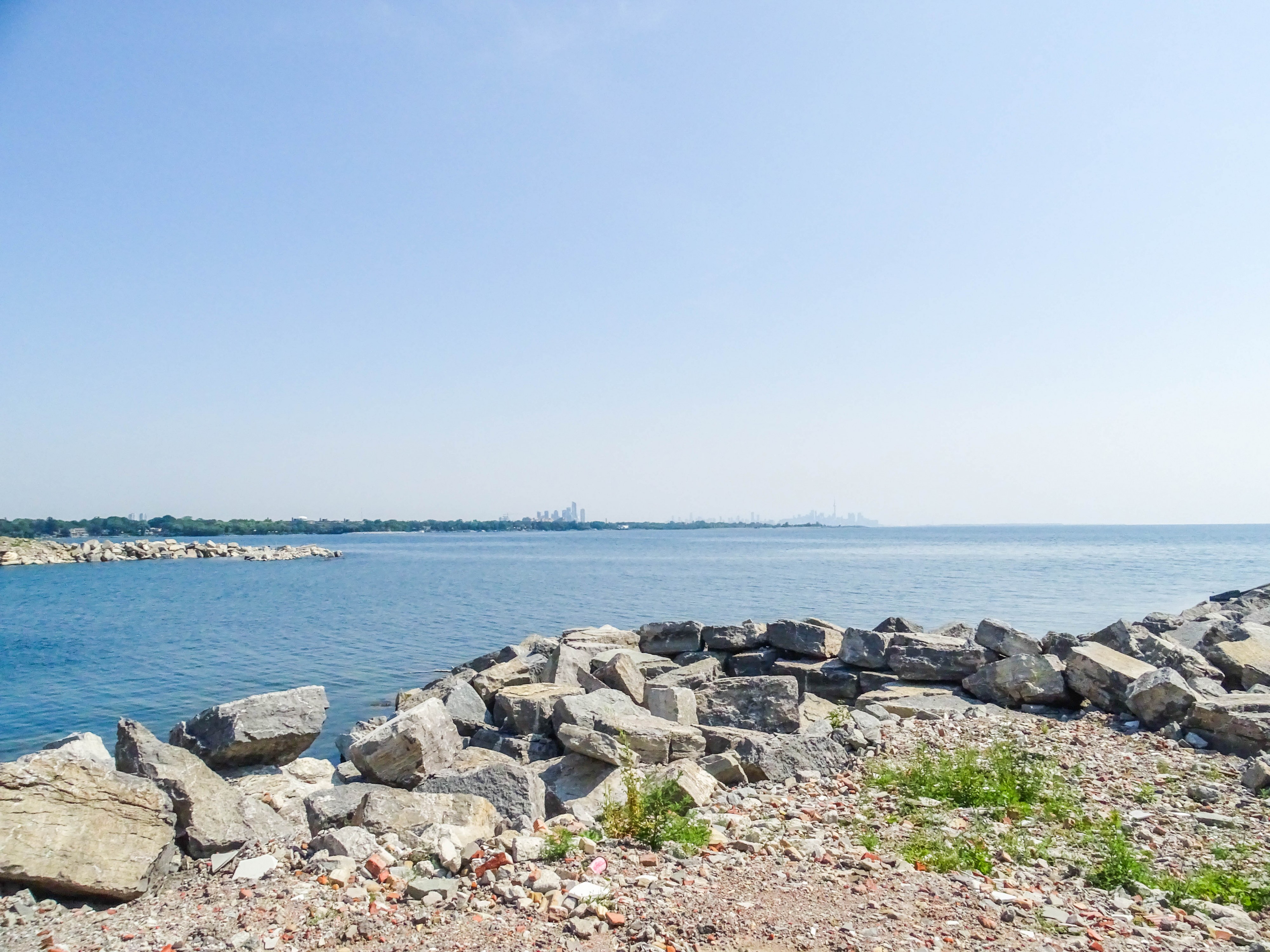 Views from the conservation area show the Toronto skyline in the distance.

A relationship with nature cannot necessarily be understood just from talking or reading about it. The connection fostered by planting the seeds, turning the soil and watering the Earth as it produces food for your table is an experience like no other.

Similarly, being surrounded by nature in the new conservation area will hopefully be a space the community can use to experience the natural world, connect with the other living things that share our urban environment, and build an appreciation for why making environmentally sensitive decisions about our future is so critically important.

The wetlands built within the site will also play an important role in bringing back ecosystems crucial for municipalities. Historically, cities were able to rely on natural systems like wetlands to help filter and absorb water,  reducing the burden on local treatment systems and lowering the risk of flooding.

However, in GTA, 85 percent of significant wetlands have been destroyed since rapid urban development began in the 1980s. This places a significant burden on local municipalities to not only invest heavily in water treatment systems to ensure local residents receive clean water when they turn on their taps, but also to protect the ecosystems that remain so they can continue to play a part in providing and filtering our drinking water.

The importance of types of projects have also been identified by recent studies into natural climate solutions, and by the United Nations, which launched its Decade of Restoration in June that is geared toward raising awareness about the need to not only protect our remaining natural spaces, but restore those that have been degraded by human activity.

A recent study by Nature United found that through, protection, management and restoration projects, Canada has the ability to reduce its natural greenhouse gas emissions by 11 percent — or 76 megatonnes — by 2030, or the amount equal to powering every single home in Canada for three years.

The study identified projects like those that improve the health of existing forests, or agricultural efforts like planting cover crops to keep soil healthy, have the potential to reduce 57 percent of the total GHG emissions identified. Protection efforts, or simply leaving our green and agricultural spaces alone, can reduce Canada’s emissions by 30 megatonnes of carbon by 2030. Five percent of the GHG emission reductions identified come from restoration efforts like tree planting programs or wetland restorations.

These types of projects also have the ability to save municipalities and taxpayers significant amounts of money in the long run. According to the United Nations, “for every dollar spent on restoration, between three and seventy-five dollars of economic benefits from ecosystem goods and services can be expected.”

While this project is yet to be complete, the unique idea to create a healthier shoreline and bring people closer to the lake has created a buzz. If the project succeeds as it is destined to, it will also be an example of how collaborative approaches bring happiness to the community and the natural world.

Lakeview may not be an oxymoron much longer.