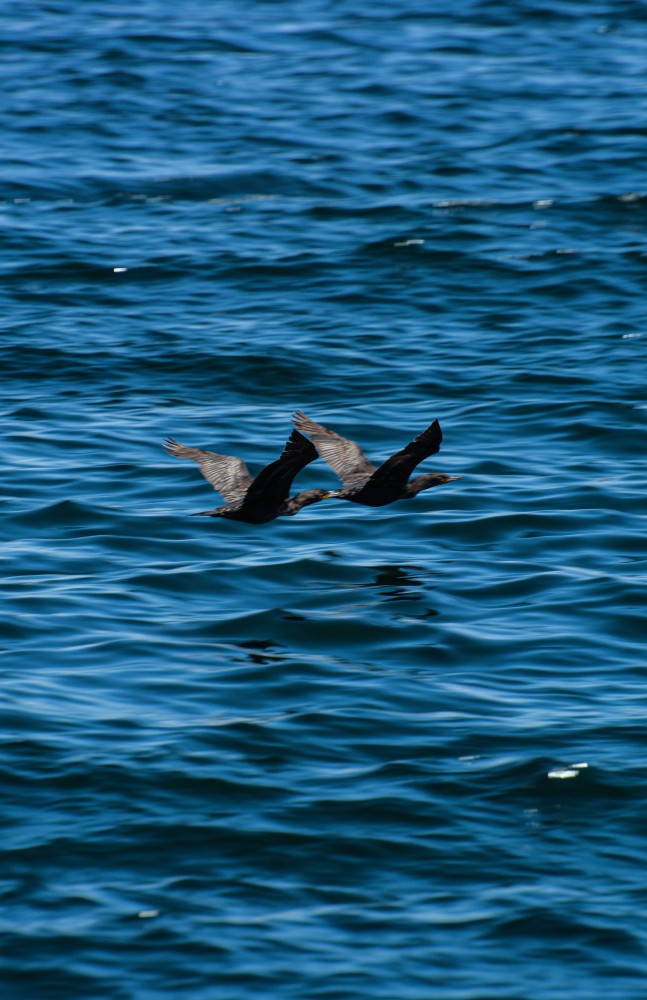 Humans can last up to 21 days without food as long as they have an adequate supply of drinking water.

Without water, the chance of survival dwindles to just three days.

This elixir of life flows through our rivers, streams and creeks providing the perfect habitat for spawning fish and other aquatic species. It swells from the earth in underground aquifers, providing cool, fresh drinking water for rural wells. In Ontario, about a fifth of the world’s fresh water fills the province’s approximately 250,000 lakes, providing everything from hydroelectric power, to dockside retreats, and drinking water for much of the Greater Toronto Area. Water is what allows human and animal life to thrive on this planet.

It is literally a lifeline for every living thing on Earth. 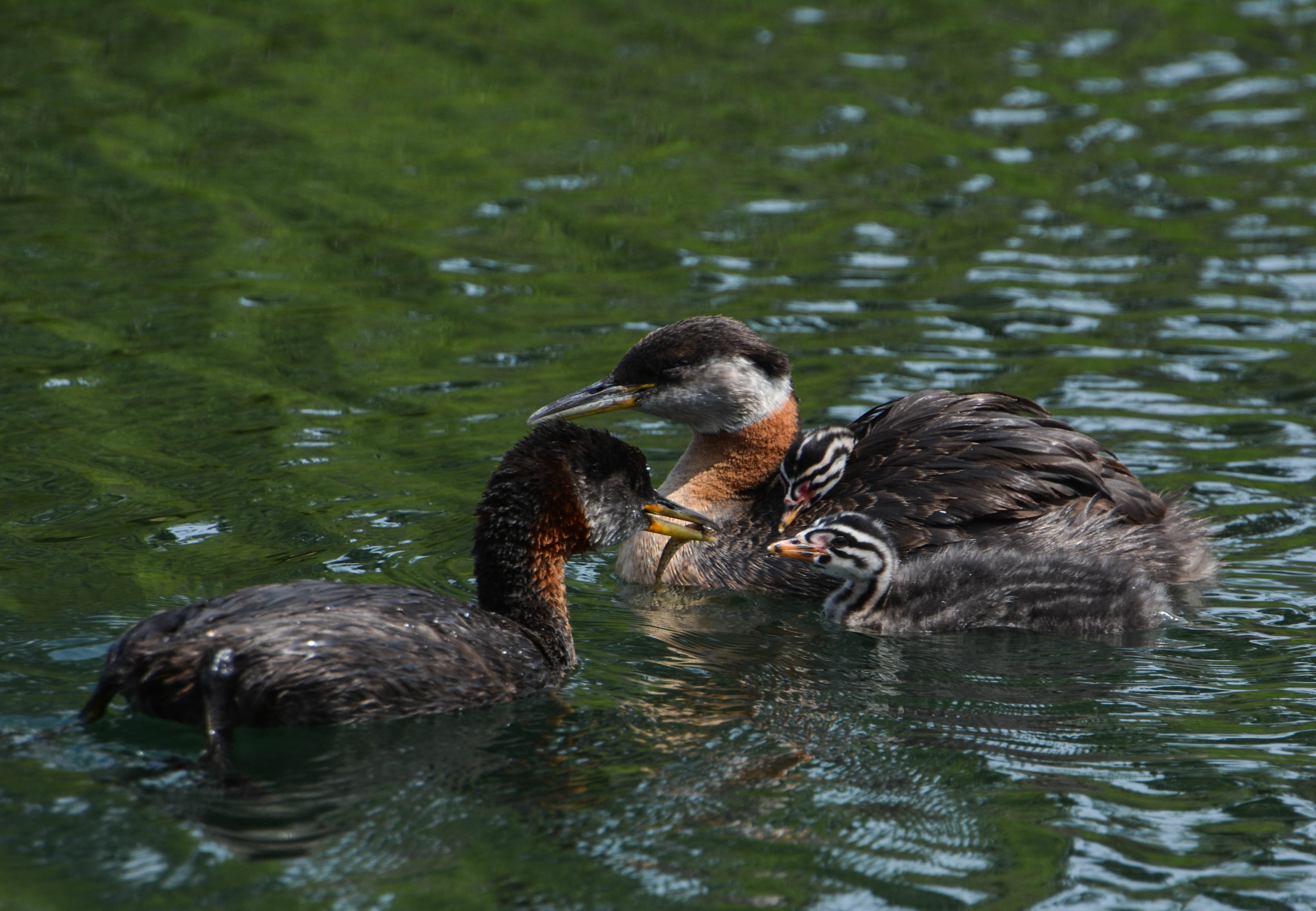 A pair of red-necked grebes feed their chicks on the shores of Lake Ontario. Rising water levels, more frequent storms and loss of habitat are threatening the species.

Microwave ovens only work because they heat the water inside all the foods we eat.

The most important parts of our bodies are literally made almost entirely of water: the brain, 83 percent; eyes, 95 percent; lungs, 85 percent; the heart, 75 percent; and our blood is 94 percent water.

Many Canadians don’t often think about how incredibly fortunate it is to live in a country which holds seven percent of the world’s renewable freshwater. The expansive Great Lakes, underground aquifers and rivers transport the lifeline to communities where purification is done before clean water is sent to the faucets of millions of people.

Quite often, residents just turn on the tap and expect clean water to flow without a thought of where it came from, or the investment and process required to make it safe to drink. Residents may also take this ease of access for granted. As of June 2021, 32 Indigenous communities in Canada have 51 long-term drinking water advisories, meaning water must often be boiled before drinking. 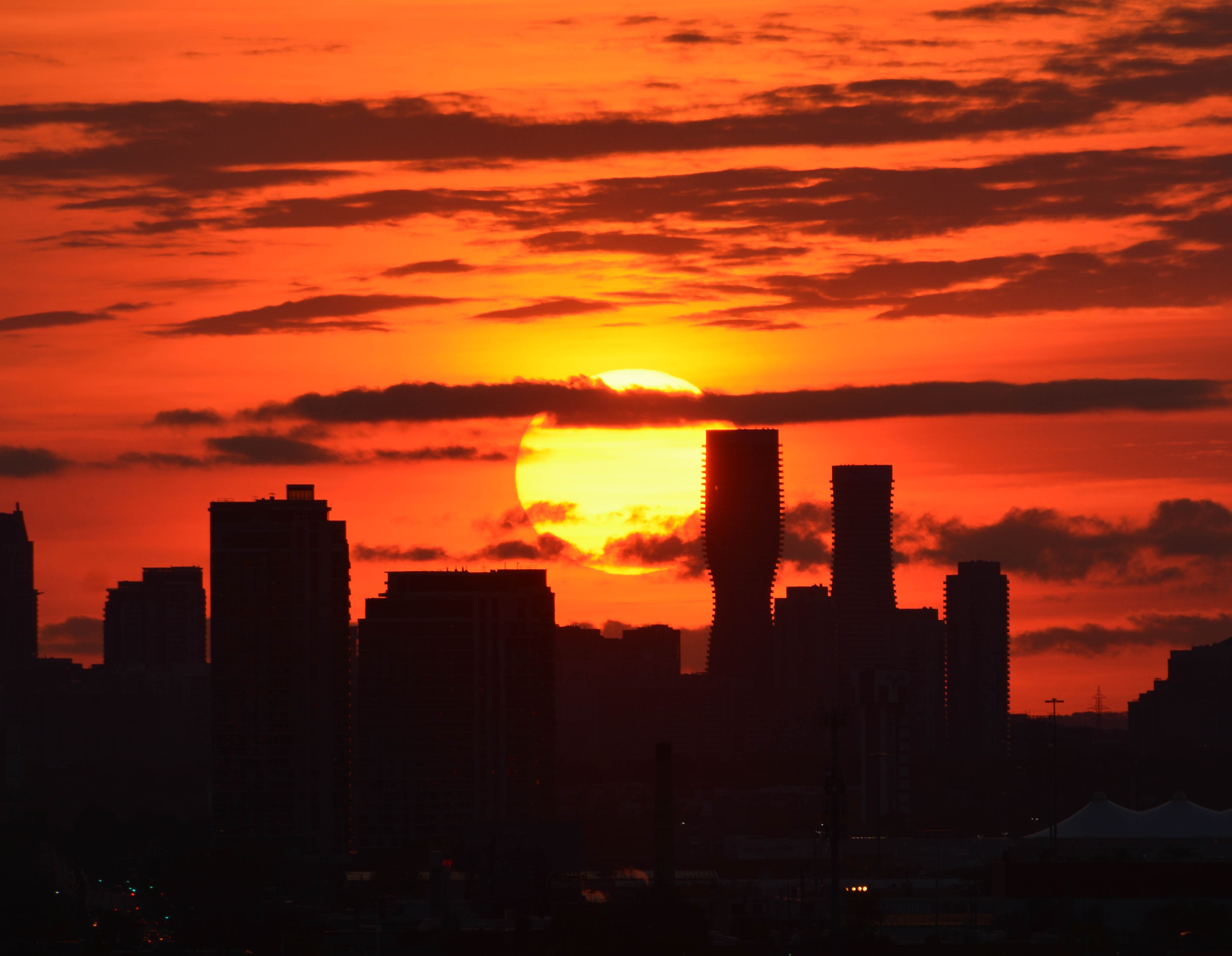 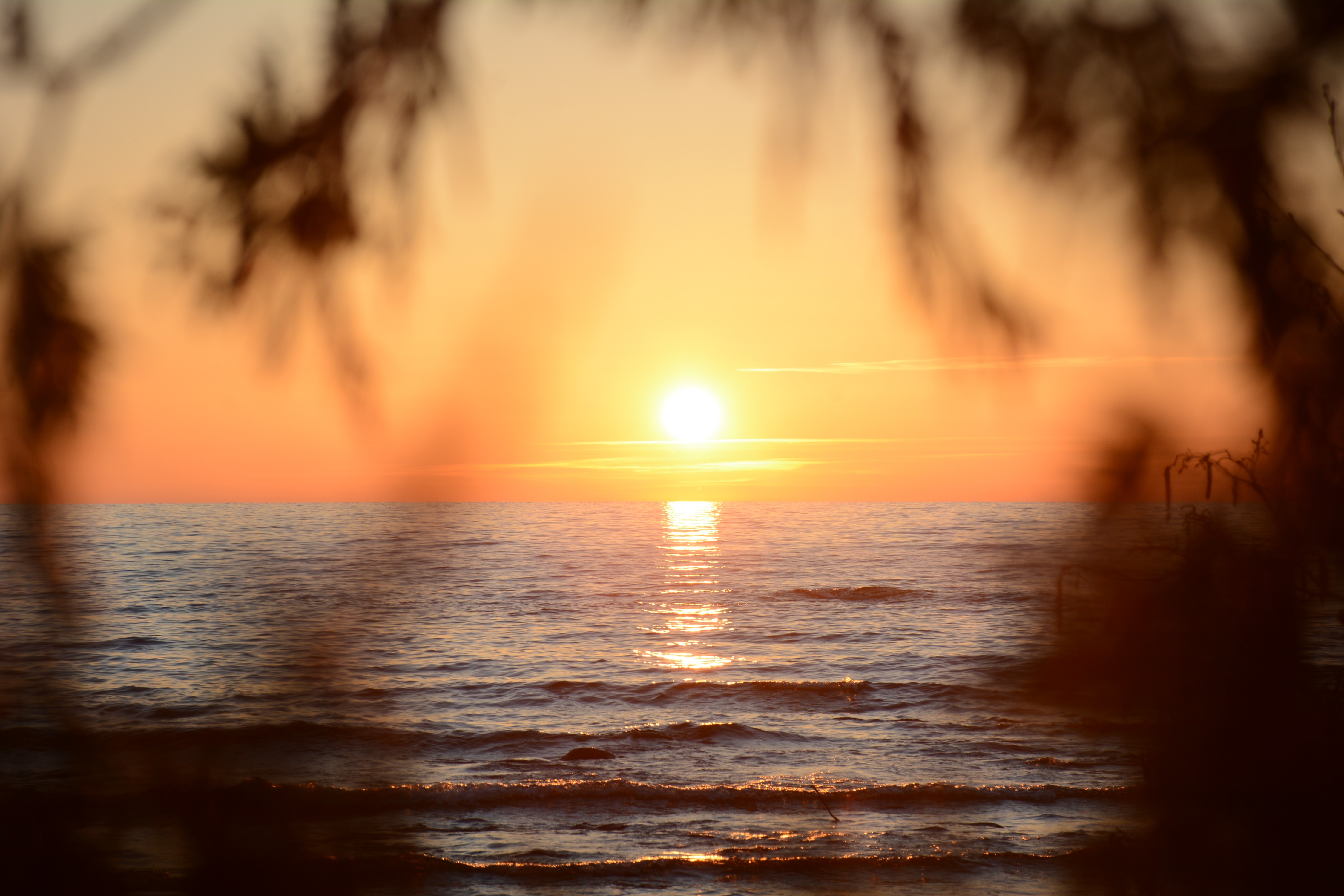 Finding long-term solutions to climate change will require finding a balance with the urban environment and the natural world.

Most of Peel Region’s drinking water comes from Lake Ontario, with some exceptions to wells and aquifers in Caledon. As urban areas grow in size and population — Peel is one of the fastest growing regions in Canada — the stress on local waterways and sources of drinking water increases. Historically, municipalities were able to rely on natural systems like wetlands to help filter water and reduce the burden on local treatment systems. However, in the Greater Toronto Area, 85 percent of significant wetlands have been destroyed since rapid urban development began unabated in the 1980s. This places a significant burden on local municipalities to not only invest heavily in water treatment systems to ensure local residents receive clean water when they turn on their taps, but also to protect the ecosystems that remain so they can continue to play a part in providing and filtering our fresh drinking water.

It’s easier said than done as the byproducts of city life leach into the environment at a rapid rate and industrial civilization continues to pump greenhouse gases into the atmosphere, driving climate change, which places its own set of stressors on local waterways.

For years, conservation authorities across Ontario have been ringing the alarm bell about the presence of chloride in local watersheds. Chloride is a compound found naturally in most water systems, occurring as sodium chloride, but elevated levels can be harmful to aquatic and human health.

During cold, icy winters, cities use salt to give traction to vehicles on slick roads. When the salty snow melts, it either sinks into the ground, eventually finding its way into the water table and local streams and rivers, or flows directly into the stormwater system travelling to Lake Ontario.

“Road salt is really easy, and it's cheap, and people in the urban areas have a large dependency on bare, black pavement,” Angela Wallace, a TRCA senior project manager for aquatic monitoring and management said.

Wallace says many municipalities are already using alternatives to road salt, like a saline/brine solution, which still contains sodium, but at a much lower concentration. It is a mixture of water and salt which is sprayed on roads before a snowfall or freeze. When sprayed it often stays put, whereas road salt can bounce away and contaminate the nearby ecosystems.

The Region monitors how much sodium is found in Lake Ontario and the groundwater which services the more rural areas of Caledon. From January to June 2020, the South Peel Distribution System, which is sourced from Lake Ontario and services Mississauga, Brampton and parts of Bolton, saw sodium levels between 6 and 25 milligrams per litre of sodium in the water. Although these levels are not immediately harmful to residents, they can have an adverse effect on the long-term health of some people.

“While sodium isn’t toxic, more than 20 milligrams per litre of sodium in drinking water may affect people with hypertension or cardiovascular disease,” Peel Region’s website reads.

If levels exceed the limit, which they often have in recent years, Peel Region has to notify the Medical Officer of Health. In some years, sodium concentrations remain high for months after winter ends, sometimes throughout the summer and fall when salt is not generally used. This is a result of excessive salting during the winter and spring months, exacerbated by the fact that sodium tends to linger in the environment for lengthy periods of time.

CVC has 11 real-time water quality stations across the watershed it manages; seven of them in the Region of Peel. At each of these monitoring stations, The Pointer has found consistent chloride levels that are unhealthy for aquatic life. Some water species impacted by high chloride levels include plants, amphibians, insects and smaller mammals.

Rattray Marsh near Sheridan College had levels of Chloride close to 1,000 mg/l at the beginning of July.

Report cards prepared by the local conservation authorities in 2018 on the health of local watersheds show a clear trend. The northern, less developed areas of Peel Region have better preserved watersheds, more forest cover and healthier habitats. However, as you travel south, those ratings decrease as urbanization degrades water, forest and habitat quality.

Organisms that are not adapted to live in saltwater, die a slow death from prolonged exposure to high sodium concentrations. The high salt concentrations cause the bodies of fish and other small aquatic species to lose water. Over prolonged periods of time this leads to extreme dehydration and eventual organ failure.

Other concerns for CAs and the delicate forms of life found in water, is the rising temperatures of streams, creeks and lakes, as a result of climate change.

CVC shows real-time tracking of temperatures in its watersheds; as of July 12, all data collected showed water temperatures at a healthy level for aquatic life. Trends from the previous week’s heatwave showed air temperatures peaking at unhealthy levels, but dropping again over the latter part of last week.

Water temperature fluctuations, while not a direct threat to municipal drinking water, can wreak havoc on many aquatic species particularly fish, who rely on certain temperatures when looking for spawning grounds.

Heat levels at Fletchers Creek in Mississauga were unhealthy for wildlife on July 6, but later went down.

Igor Lehnherr, a University of Toronto Mississauga (UTM) assistant professor in the department of geography, geomatics and environment is concerned about what other pollutants can arise from poorer water qualities.

Chemicals like pesticides and fertilizers which encourage growth of plants and grass are also causing large algal blooms in water bodies such as Lake Erie.

“Temperature is definitely a factor in promoting those big algal blooms,” Lehnherr said.

A further concern for these blooms is the toxins they release into the water. The higher levels of cyanotoxins can result in people getting sick by even just swimming in bodies of water with large algal blooms. While the blooms may sometimes only occur in patches, eutrophication of the entire body of water is a risk. This occurs when the water becomes so enriched with minerals and nutrients it allows fast growing species, like algae, to bloom out of control, smothering other forms of life in the water.

As climate change brings about more flooding and extreme weather — just this past week there was severe flooding in Germany, raging wildfires in BC, blistering heat waves across many parts of the United States, and a tornado just north of Toronto in Barrie that caused significant damage — it can exacerbate contamination in local waterways by pushing more pollutants into rivers and streams. This places a larger burden on municipal water treatment systems to ensure they can handle the larger, more complex workload. In 2020, the Region spent $227 million making sure drinking water was clean and safe to drink, along with repairs to expensive infrastructure.

Testing drinking water is a multi-step process, some of which Lehnherr said are not routine and can be very pricey to conduct. UV radiation, chlorination, liquid oxygen and hydrofluorosilicic acid are just a few things Peel water treatment centres use to disinfect and purify the water. “There's definitely a cost associated with that. Both operational, but also in terms of infrastructure,” Lehnherr said.

If natural water quality were to improve, it is possible treatment costs could decrease, allowing municipalities to put tax dollars towards other projects.

While chemicals at facilities do a good job at keeping harmful bacteria away from faucets, filtration systems do a good job of sifting through larger particles or debris, but they don’t catch everything. It’s unclear whether Peel’s water treatment systems have the ability to stop complex pollutants like pharmaceuticals or microplastics. While these more insidious contaminants can be extremely expensive to detect due to their size, there are much larger problems that community members are already pointing out.

A joint study from the waste management and environmental sustainability departments of the City of Mississauga found lead fishing equipment is hurting local bird populations. A presentation on the subject was heard at the City’s Environmental Action Committee on July 6.

“Lead sinkers weighing less than 50 grams, or less than two centimeters in length are banned in national parks and in wildlife refuge areas,” Paris Liu, a summer student with the waste management department said, “Pork Credit and our parks are not part of this.”

Those fishing with lead sinkers have the potential to lose them in the water; birds like ducks grab them as rocks and end up being sick. There are other more environmentally friendly forms of tackle, but many local Mississauga shops do not provide them.

Some litter may even sink down to the bottom and never be caught by filters, but may be ingested by animals looking for food.