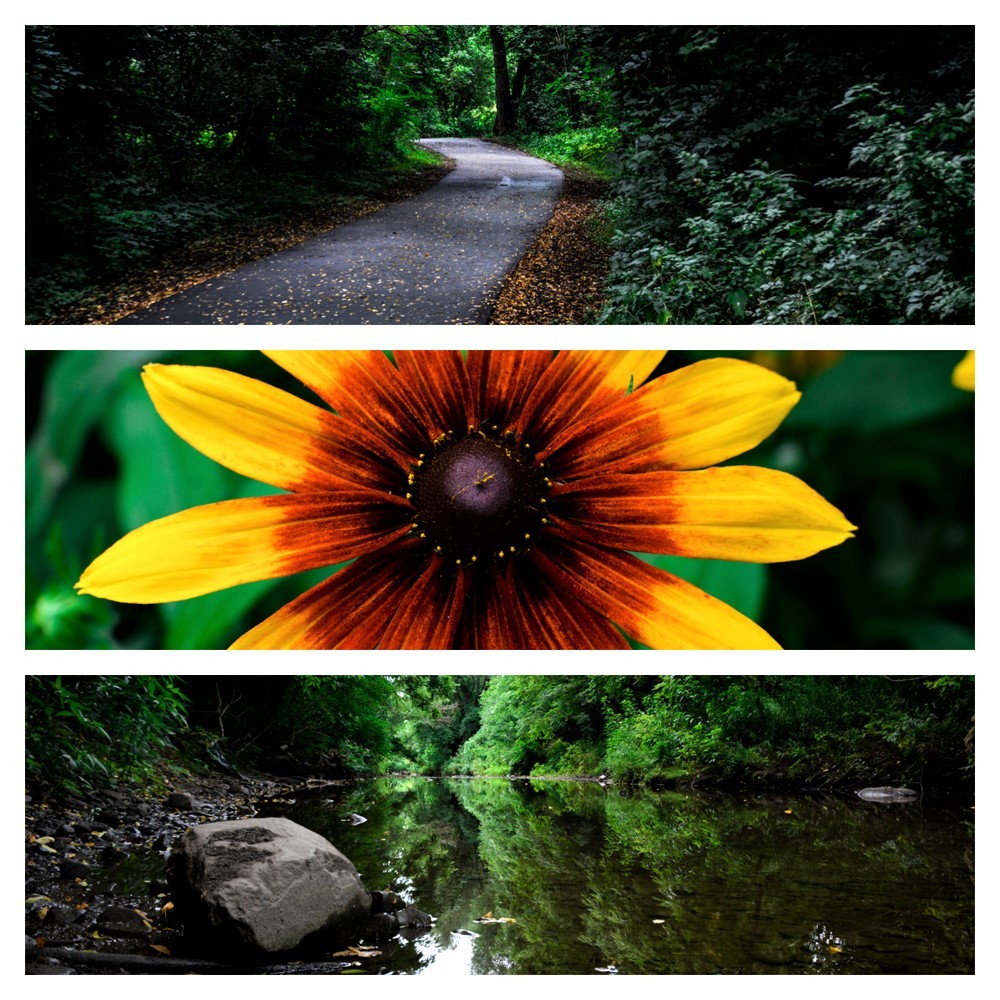 Like nature, Ontario’s 36 Conservation Authorities are adapting to an ever changing climate — the political one.

Since Premier Doug Ford took office in 2018, he has consistently put sprawling development ahead of the lifeline and lungs of our natural world. 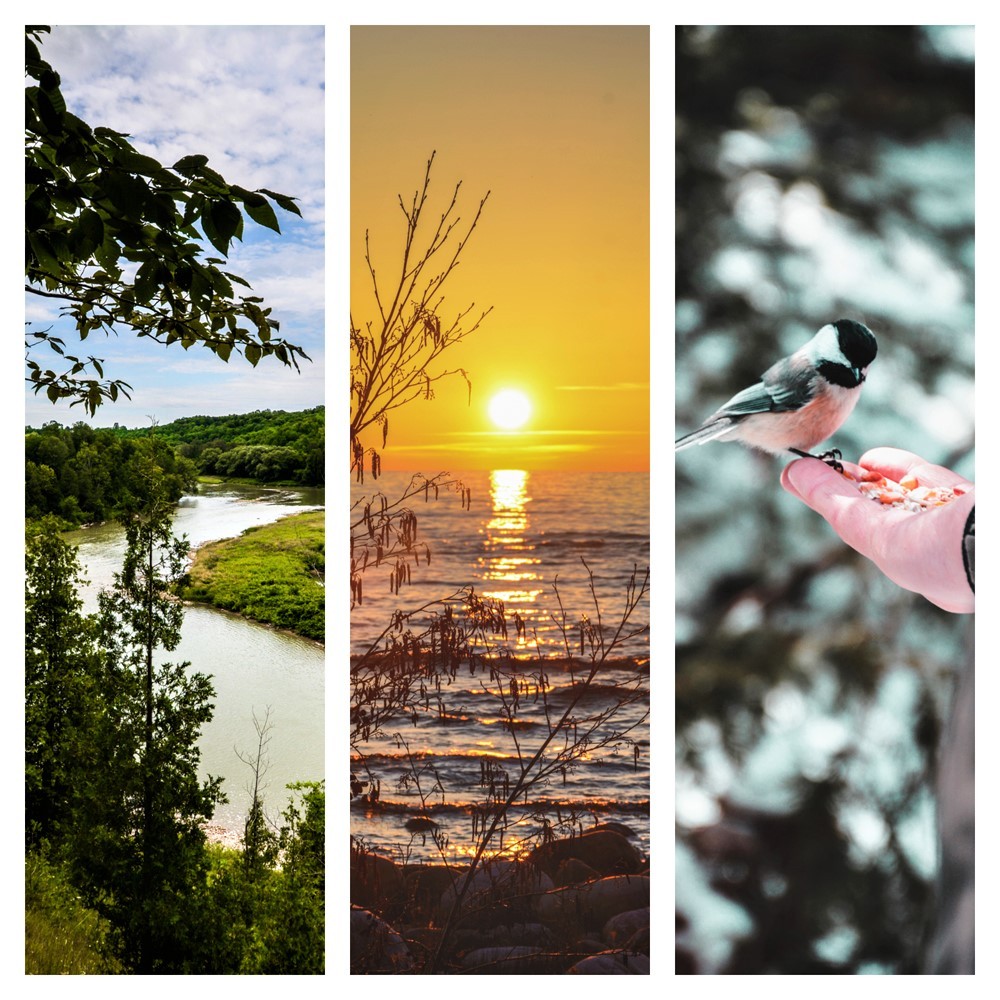 Conservation Authorities also do vital work in the area of planning, often holding the authority to reject development proposals that put natural habitats, watersheds and other ecosystems at risk.

Much of this work is now being threatened.

In December, Ontario’s PC government passed budget Bill 229, a COVID-19 recovery plan, which made amendments to 44 Acts, including the Conservation Authorities Act, through Schedule 6. It was slipped into the omnibus budget legislation and has since drawn outrage from those who recognized Schedule 6 has next to nothing to do with pandemic recovery.

It proposes revisions to the fundamental mandate of Ontario’s 36 Conservation Authorities, forcing them to differentiate between mandatory and non-mandatory programs and services which are currently provided by CAs, and how they are funded. So-called non-mandatory functions could lose funding from Queen’s Park. Some of the proposed changes include:

It’s an obvious give-over to the private sector, tired of having developments delayed or rejected due to conservation-related issues.

Conservationists across the province are now mounting a challenge to the PC government’s developer-friendly tactics.

The Canadian Environmental Law Association has done extensive work to analyze the proposed changes and the potential impacts. It wrote in a November analysis that Schedule 6 of Bill 229, sidesteps Ontario’s Environmental Bill of Rights, by shoehorning conservation-related legislation into a budget bill, thereby circumventing the requirement for proper public consultation. 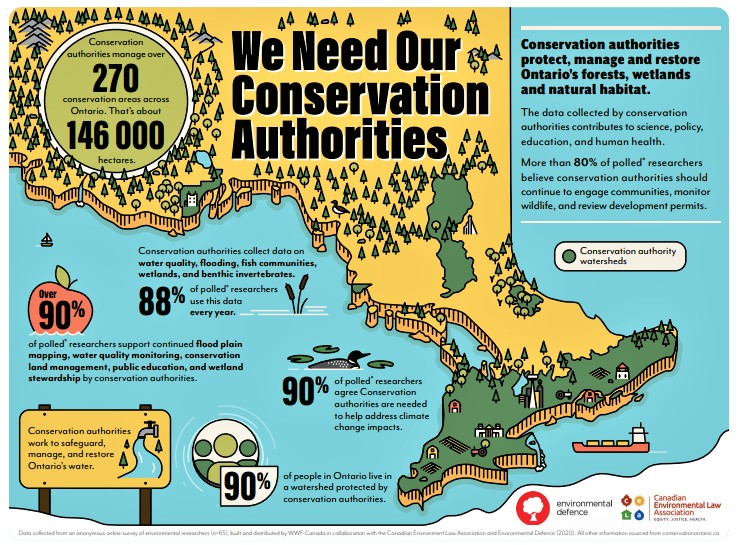 “[T]he majority of the Schedule 6 amendments are regressive in nature and are completely contradictory to fulfilling both the purpose of the Conservation Authorities Act and the desire to set the course for more climate resilient communities in the future,” the group’s analysis stated. “Accordingly, CELA recommends that Schedule 6 not be enacted in its present form and instead be withdrawn in its entirety from Bill 229. Further, CELA recommends that the Ontario government ensure that the current mandate of the province’s 36 conservation authorities is maintained and enhanced, in order to effectively protect, restore and manage the watersheds where 95 percent of the people of Ontario reside.”

The Association of Municipalities of Ontario has sent its submission on Schedule 6 to the Province, requesting it be removed from Bill 229.

“The changes proposed in Schedule 6 are raising alarm for many municipal leaders, and others, about how the proposed amendments can be implemented and how these changes would improve conservation authority effectiveness and efficiencies,” AMO wrote in a statement late last year.

The powerful organization, which represents the province’s 444 municipalities said Schedule 6 creates “an apparent conflict between the fiduciary duty of Conservation Authority Board members and the proposed amendment requiring board members to act on behalf of their respective municipal councils.”

Schedule 6 could also, effectively, lead to a veto power for the Minister of Natural Resources and Forestry to make decisions on development applications, regardless of what a conservation authority and its team of experienced scientists say about the risks, or the development’s impact on the surrounding environment.

In the past, when such an application was forced through by a municipality (under pressure from a developer) conservation authorities have had the ability to appeal decisions to the Local Planning Appeals Tribunal (LPAT) and previously the Ontario municipal board, if that development contravened environmental protections or could put further pressure on strained species or ecosystems. The PCs are now trying to strip that power.

Mississauga councillor and CVC Chair Karen Ras wrote a blistering letter to the Province when the conservation authority first learned of the proposed Schedule 6.

“The long-term consequences will be very hard to undo, and we have worked very hard for many years at the Credit Valley Conservation to do what is right for the environment and try to strike a balance between good development and protecting our watershed,” she told The Pointer last year.

“I’m really trying to understand a rationale, and none is coming to me when I look at a lot of these changes.”

Dozens of other organizations and municipalities and regions have also voiced alarm over Schedule 6, as the deadline for submissions on the proposed changes is today, June 27.

Both Peel Region’s CAs, the Credit Valley Conservation Authority (CVC) which covers most of Mississauga, and the Toronto Region Conservation Authority (TRCA) which covers Brampton, have been working tirelessly to adapt to the possible changes. Some of the important work done by the CAs in Peel, directly impacts the Region’s Climate Change Action Plan, which is of high priority for the area with rapidly changing climate patterns being seen through devastating floods in recent years.

With large growth planned for parts of Brampton and much of Caledon over the next three decades, stripping away the authority of CAs could lead to critical damage of local watersheds, and the further loss of crucial ecological features needed to keep population centres safe, especially as climate change puts unprecedented pressure on infrastructure.

The amount of work CAs do for municipalities, to ensure staff and councillors are equipped to deal with climate action is invaluable. Through the changes to the CA Act, a valuable function Peel could lose is the measurement and analysis of the region’s watersheds. Understanding and collecting data on the watershed is an important part of understanding flood risk management and restoration work of key rivers and streams. 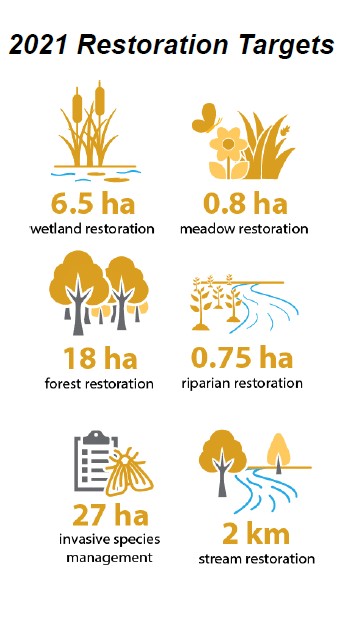 TRCA and CVC both have targets for 2021 which they are determined to meet even with action from the Province.

“We take the view that you can't manage what's not measured. So we need that data to be able to apply science in our watershed,” Deborah Martin-Downs, Chief Administrative Officer of the CVC, said at Thursday’s Regional Council meeting.

If the Region is unable to continue supporting these kinds of programs, they are at risk of being cancelled by Schedule 6.

In direct support of the Peel Climate Change Action Plan, there are three areas CVC and TRCA focus on: water management, natural heritage and education/ sustainability actions. This work includes projects to plant trees, implement stormwater management systems and educate more landowners to take action on their properties to mitigate risks from weather.

“Without these programs and services, we are not going to be as resilient to the change before us,” Martin-Downs said.

TRCA has accomplished a number of projects that align with Peel’s action plan. Under the watershed category, John MacKenzie TRCA’s Chief Executive Officer outlined efforts to treat trees against the Emerald Ash Borer, an invasive species that kills Ash trees, and the removal of 2,000 pounds of garbage from waterways. The agency also provided learning opportunities for Peel teachers and students during the pandemic to help advocate and participate in key climate change mitigation efforts.

TRCA is also supporting the City of Brampton with its downtown Riverwalk plan to help prevent the flooding of key transportation and building infrastructure. City staff were given assistance to apply for grants in partnership with the CA.

While the Province is pulling valuable funds away from CAs, both CVC and TRCA have created a measurement system to understand which of their programs are most valuable for the municipalities they serve. Since 2007, the Region has provided funding to the CAs through a Special Levy fund, which focuses on mitigation and adaptation of the climate.

Over the years, the Region has been working very closely with the CAs as climate change persists. Partnership on multiple projects throughout the years has allowed the two entities to work alongside to address key issues, one being watershed management.

Much of this work could now be threatened because of Schedule 6.

The most recent tool CVC and TRCA developed in 2014, was a risk-based methodology analysis to look at how their climate change programs progressed. This method was used until 2016 when it was approved by Regional Council to be a step-forward requirement of all projects the CAs have with Peel.

A measurement system the CAs brought to Council Thursday is not a new project, but rather a tool to be as transparent as possible with its key regional partner, which provides much of the support received by the CAs. The system will incorporate a progression-based analysis from the previous methodology tool, but will also measure specific performance objectives of key conservation programs. The new project sets out to improve tracking and reporting to Council and showcasing where regional tax dollars are going, and how the money is working for Peel. 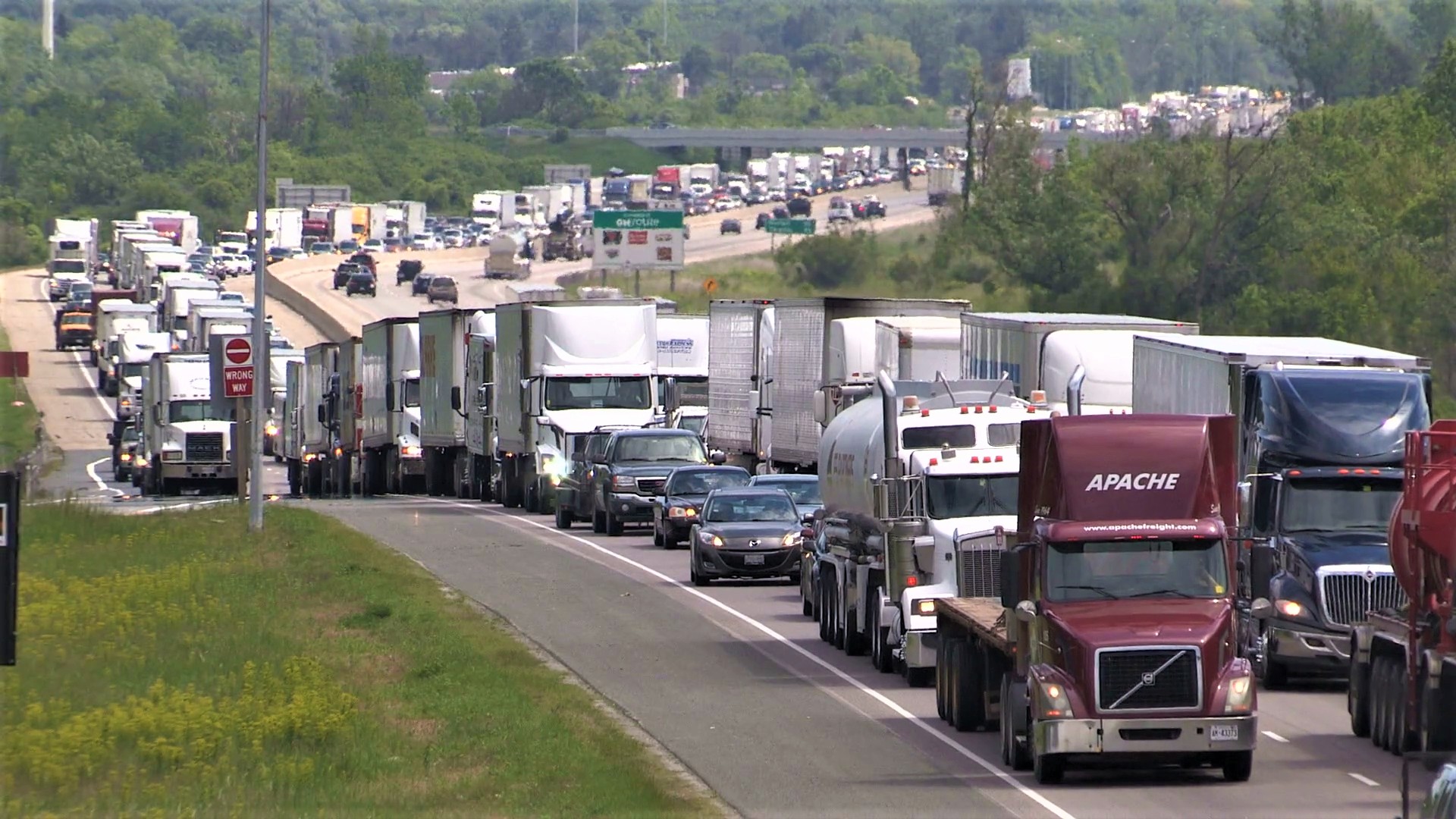 Saving land from projects such as the proposed 413 Highway and reducing carbon emissions is one of the ways CAs were able to decrease the impact of climate change. (Photo: Flickr)

“The primary goals of the Measurement System project were to establish a consistent methodology to align Peel-CA programs in the development of shared KPIs to measure the collective performance of TRCA and CVC climate change initiatives towards achieving shared outcomes,” the June 24 report states.

The goal is to make conservation a baked-in aspect of all budgeting and planning by the Region of Peel.

By 2023, the entire budget will be informed by the measurement system. The adoption of this comprehensive evaluation system will hopefully survive the changes proposed in Schedule 6.

The revisions by the PC government strip CAs of power over protecting Peel’s natural spaces. Ford’s PCs claim they are bringing governance back to the “core principles” of CAs.

The list of non-essential programs that are at risk is much longer.

These include non-mandatory research, development services to land owners, and ecological monitoring outside of CA lands. For municipalities, CAs would not be able to restore urban, rural or agricultural land, plant trees or manage forests, enhance or restore wetlands or assist with invasive species, in the way they have in the past.

With the possible loss of core programs, municipalities across Ontario will need to find other ways to address their changing climate needs. Schedule 6 also strips CAs of the power to approve or deny projects in sensitive natural areas; developers can now sidestep the organizations and head right to the Province with their plans.

While the Province continues to chip away at the very little judsritiction the CAs have left, COVID-19 has shown people the beauty and importance nature holds.

When restrictions prevented people from gathering inside, many went outside to protect their mental and physical health. Over 2020 and into the first quarter of 2021, there has been a massive uptick of people going to conservation parks and strolling along their trails, having picnics and enjoying other activities.

Being outside has become very popular during the pandemic, especially for residents who live in areas with limited green space. (Credit Valley Conservation)

The rise in visitations means more people are enjoying what nature has to offer and will be increasingly more aware when programs and services are taken away from them.