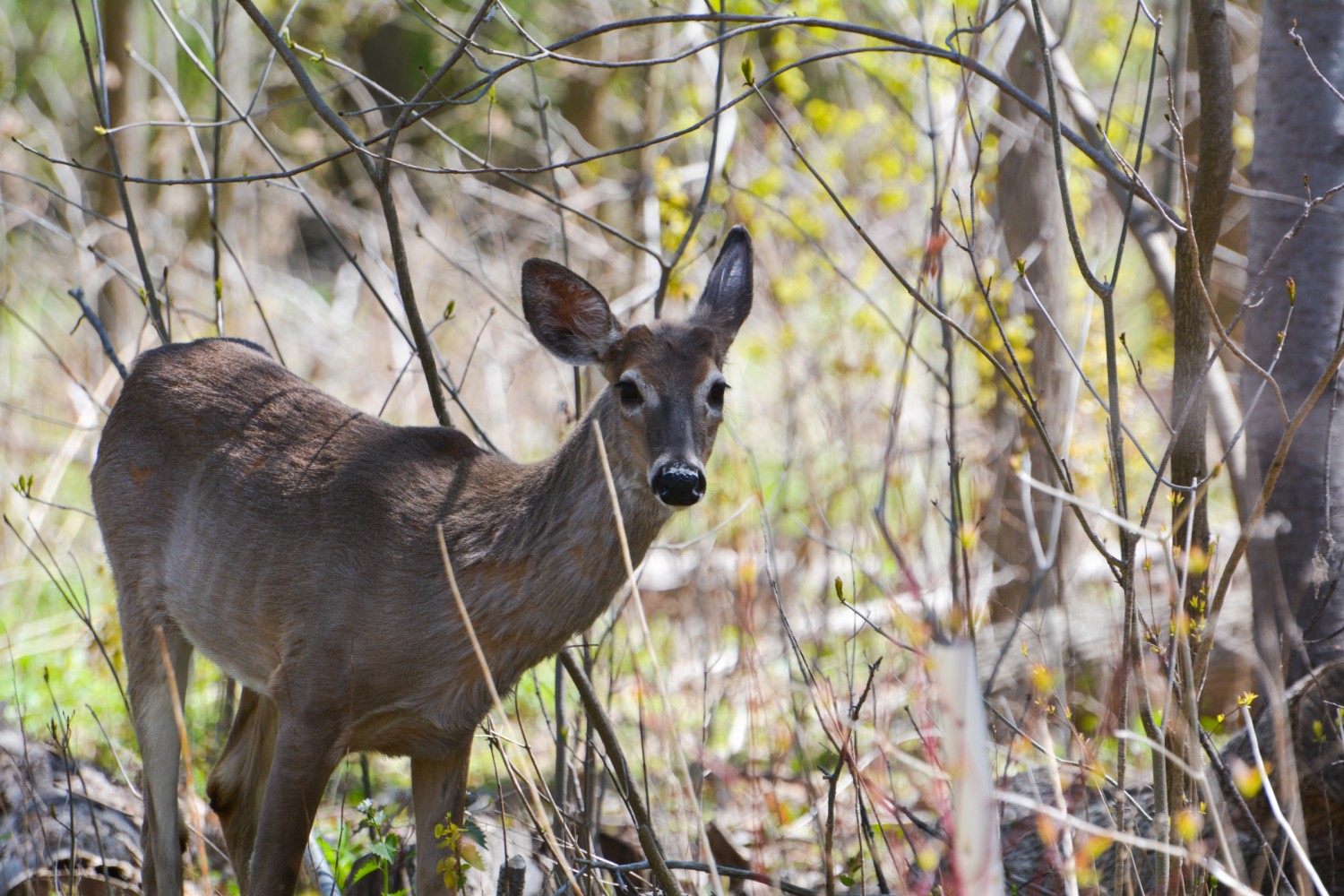 On a single square metre of grassland, life exists in abundance.

Caterpillars munch on grasses and shrubbery to feed their metamorphosis into moths and butterflies. Spiders spin webs between thin twigs, ensnaring gnats, midges and mosquitoes in threads of silk. Worms and grubs feed beneath the soil while songbirds and dragonflies soar above. 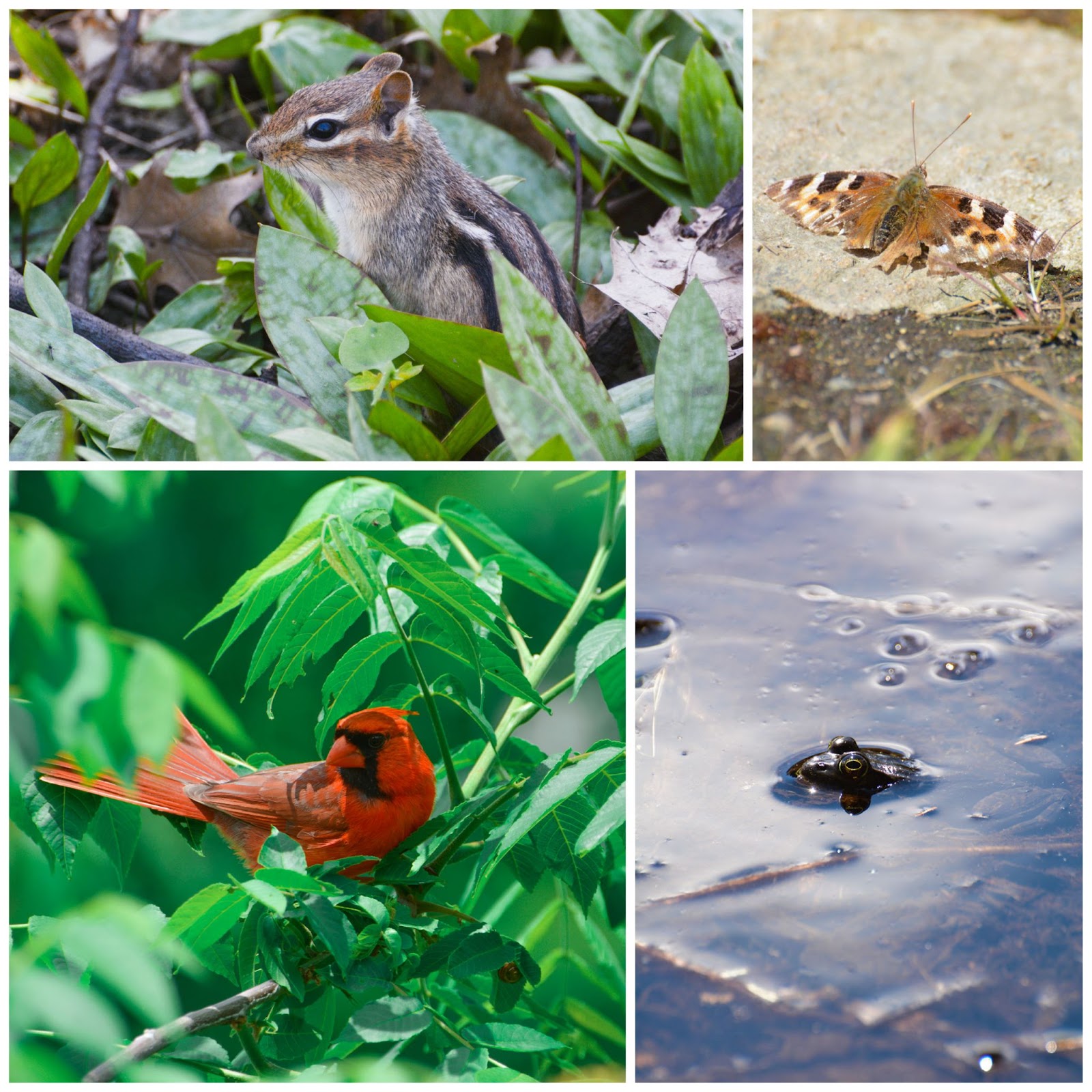 An abundance of wildlife are impacted by the land use decisions made around the council table.

This tiny natural Eden does not exist in a vacuum. These small lifeforms support the broader web of life that not only provides us with the food we eat and the natural spaces we enjoy, but the climate change mitigation we desperately need right now.

A new study from Nature United has made it abundantly clear that in the world’s fight against global warming, the natural world is going to be one of our most important allies. That is, if elected leaders are able to fully realize its true value.

As stated, that square metre of grassland does not exist in a vacuum. In the same way it affects our lives, human life has its own residual impacts, few of which are beneficial. Not mentioned in that image of natural bliss is the increasing contamination human life is forcing upon it. There are the more visible impacts; the trash lining the nearby roadway, or the noise and light pollution created by our cars and cities. But there are also the more hidden, insidious impacts, like the chlorides in the soil or the microplastics in the water.

“When we harm the land or we harm the water, we harm ourselves,” Larry McDermott, an Algonquin from the Shabot Obaadjiwan First Nation told a recent webinar hosted by Ontario Nature.

This tenement of natural law — practiced by Indigenous populations for generations — is manufacturing itself in a disturbing number of ways today. 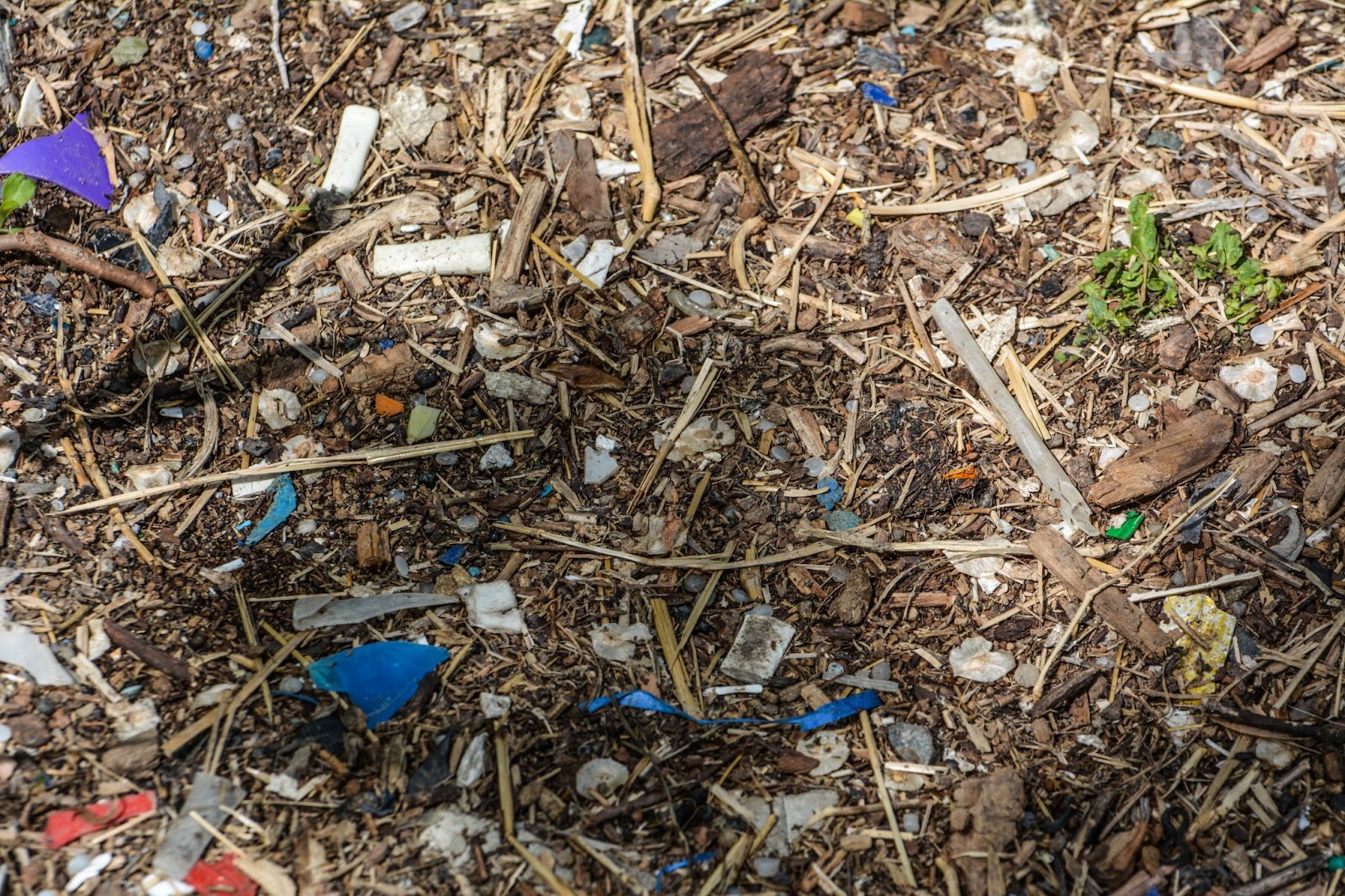 Modern dependence on plastic has led to the earth being quite literally coated in the substance. From earth to ocean, plastic is inescapable.

According to research done by the Province of Ontario, microplastics not only litter the shores of all the Great Lakes, but they have been found in sediment cores taken from the centre of Lake Ontario — 802 feet beneath the surface.

Even more disturbing are estimates from the World Wildlife Fund that found humans are consuming approximately five grams of plastic every week through their food and drink. That’s the equivalent of eating a credit card’s worth of plastic every seven days.

The new study from Nature United makes it clear that if new management, restoration and protection measures aren’t put in place to protect our sensitive natural spaces, the harm could be even greater.

“What’s really clear to me is that we really need to start working, it’s an all hands on deck approach,” says Ronnie Drever, Nature United’s senior conservation scientist and lead author of the new study. “We need to start doing them all right away to be honest.”

In many ways, the exact opposite is happening.

“We can do so much better for our children and our children’s children,” said Kathleen Wilson, a long-time Caledon resident, speaking during a town planning committee meeting earlier this month. Wilson was pushing back against a pair of warehouse developments proposed for the town that will be built on and around sensitive Greenbelt lands.

The dual proposals, both along Dixie Road in Caledon, combine for approximately 4.9 million square feet of “e-commerce development” including warehousing, distribution and industrial uses.

“We think it is a great future site for potential employment uses,” explained Stephen Armstrong, a consultant who spoke on behalf of the developer. The company estimates the two proposals could bring about 4,000 jobs to the area.

In both applications, agricultural land will be lost and sections of the Greenbelt will become surrounded by pavement; pavement that will carry GHG spewing, diesel leaking semi trucks. 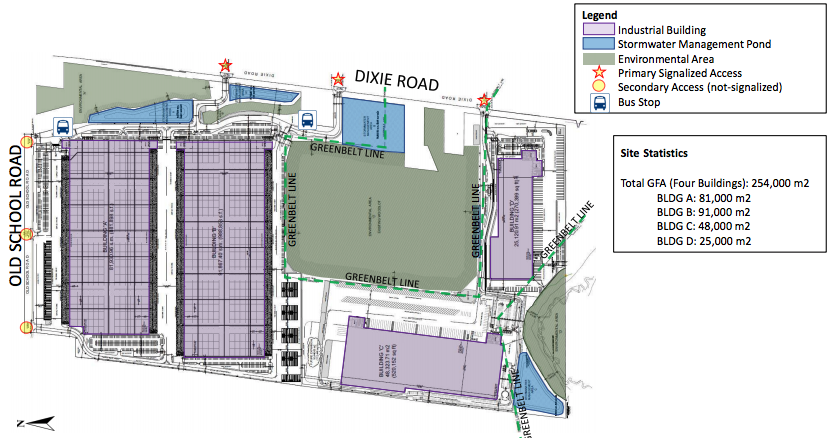 The site plan for 12862 Dixie Road which proposes a massive warehouse development wrapped around portions of the Greenbelt.

(Graphic from the Town of Caledon)

Armstrong was quick to point out the proposals will not remove any Greenbelt lands. He’s not wrong, but in the same way a noose cuts off airflow, the concrete strips of the distribution centre will effectively yank the knot tight around these sensitive lands, which include a woodlot and stream home to threatened and endangered species.

According to the Natural Heritage Information Centre maintained by the Province, two threatened species — the bobolink and eastern meadowlark — have been spotted in the area of the 12862 Dixie Road site, along with the woodthrush and eastern milksnake, both species of special concern. The bobolink and eastern meadowlark have also been spotted on the 12035 Dixie Road location and the redside dace, an endangered fish, has been seen in the waterway that runs through it. 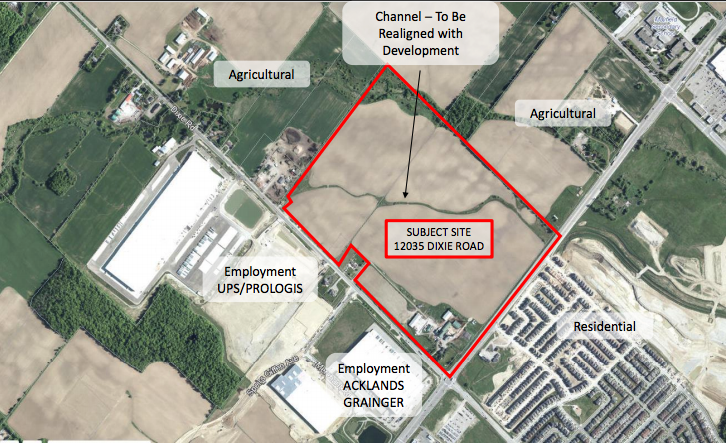 The waterway which runs through the middle of the 12035 Dixie Road site is part of the Greenbelt and home to redside dace, and endangered species. The proposal plans to realign the waterway.

(Image from the Town of Caledon)

The Endangered Species Act legislates that land home to endangered or threatened species is automatically protected from development. As part of the design process for these sites, studies have identified mitigation measures — a 30 metre buffer between the development and Greenbelt lands, stormwater management, erosion control — to ensure the habitat for the species of concern is not impacted. However, experts have said that even with strong mitigation measures, impacts to wildlife and habitat are not completely avoidable.

“Approving this application will be yet another instance of degrading an ecosystem, in this case the Greenbelt, and flies in the face of the Region of Peel’s declared climate emergency as well as conflicting with key statements of the Town of Caledon’s Agriculture Policy,” said Caledon resident Jenni LeForestier, who was recently nominated to run for the Green Party of Canada in the riding of Dufferin-Caledon. 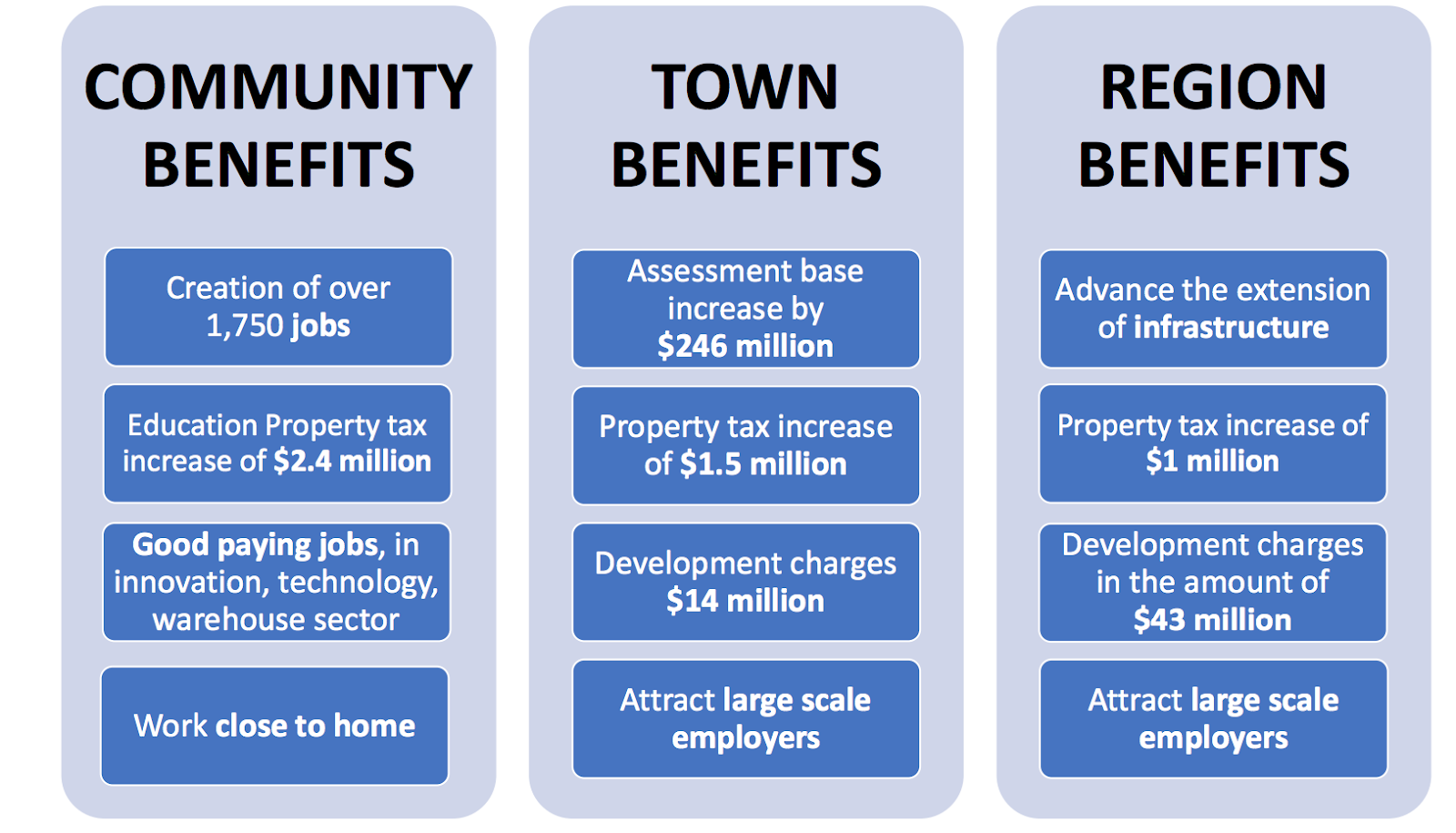 Projected benefits presented by the developer, Tribal Partners, for the 12862 Dixie Road site. It’s unclear how these figures were calculated.

(Graphic from the Town of Caledon)

When it comes to the 12862 Dixie Road site, the Region of Peel had a number of issues with the proposal, including the need to extend municipal water and septic service to the site (of which there are no plans to do so), the fact that the watermains along Dixie Road and Old School Road “do not have sufficient pressure to accommodate the demand of the proposal”  and the need to update roadways in the area to add turn lanes into the site. The Region also states the project is not consistent with either the Regional Official Plan, the Growth Plan, or the Provincial Policy Statement.

The development applications are also not consistent with the climate emergency declared by Caledon, the Region and Peel’s other municipalities, or the climate change master plans all of them have adopted.

The Region of Peel’s plan aims to reduce emissions 45 percent from 2010 levels by 2030; Brampton is looking to reduce emissions 80 percent from 2016 levels by 2050; Mississauga, 80 percent from 1990 levels by 2050; and finally Caledon says it hopes to cut emissions 36 percent below 2016 levels by 2030 and even be net zero by 2050. All of these plans involve building retrofits, a shift toward more sustainable energy, and expensive transitions for municipal transit fleets. For example, the average diesel bus costs municipalities approximately $600,000, but a hydrogen bus costs approximately $1.6 million. Eventually these investments will lead to reduced GHG emissions. However, according to Nature United, there are much easier, and cheaper options that can be implemented right now.

The Nature United study identified 24 “pathways” which if fully implemented can help Canada reduce its natural GHG emissions by 11 percent — or 76 megatonnes — by 2030, or the amount equal to powering every single home in Canada for three years.

The study identified a trio of different project types — protect, manage, and restore — of which management efforts, projects like those that improve the health of existing forests, or agricultural efforts like planting cover crops to keep soil healthy, have the potential to reduce 57 percent of the total GHG emissions identified. Protection efforts, or simply leaving our green and agricultural spaces alone, can reduce Canada’s emissions by 30 megatonnes of carbon by 2030. Only 5 percent of the GHG emission reductions identified come from restoration efforts like tree planting programs or wetland restorations. It means that while municipalities celebrate successful tree planting programs, any mitigating impact those trees have on the climate picture is completely erased by making poor land use decisions that compromise Greenbelt lands or destroy prime agricultural land.

“Trees are great and they are really an important way to think about nature based climate mitigation, but in terms of creating new forest, we really need to give those forests time to grow and make sure we are stewarding them in the long term,” Drever says. “A lot of the opportunity is really cost effective and certainly a lot cheaper than other types of mitigation approaches. So, I think that there is definitely a role for this type of information in helping people making decisions like that and valuing our existing system and making sure we work harder to restore our degraded ones.”

Drever says the biggest opportunity identified in Ontario is the protection of existing grasslands — which includes pasture lands, hay lands and native prairie.

In Caledon, the problem is much bigger than these two applications. As of June 8, there were 30 development applications across the town’s five wards proposing to convert approximately 1,066 hectares — about 2,000 football fields — of prime agricultural land. Converting these lands will not just impact Caledon, but can have a domino effect across all of Peel’s climate change mitigation efforts. If Peel is unable to reach its climate change goals, that could prevent the broader GTA from reaching its targets, then the province, then the country.

Like the natural world, these climate change decisions are not made in a vacuum.

The study’s authors state that these natural solutions will be “vital” to reaching Canada’s enhanced carbon reduction targets. In April, Prime Minister Justin Trudeau pledged Canada would cut greenhouse gas emissions by 40 to 45 percent below 2005 levels by 2030. It’s a more ambitious target than the previous one set by the Conservative government of a 30 percent reduction by 2030. Drever hopes the recent study can serve as a guidebook for the federal government who pledged $4 billion in the last year’s fall economic statement for natural climate solutions.

“Obviously the focus has to be on reducing fossil fuel use and decarbonizing our economy, but we think that natural climate solutions are a big part of the puzzle,” he says.