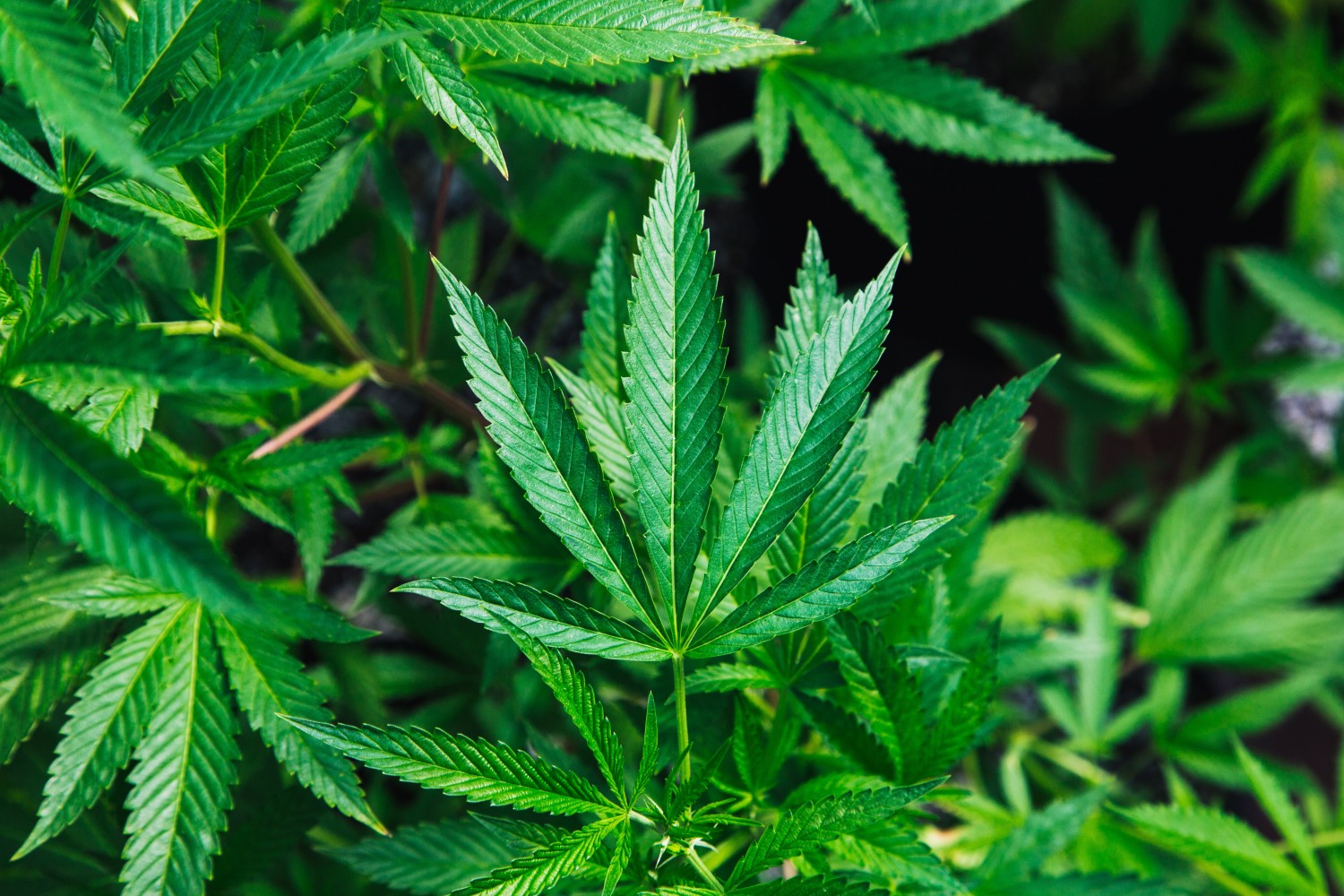 Legal cannabis retailers continue to face a roadblock from a majority of Mississauga city councillors.

In an 8-4 vote, council once again turned down the possibility of having legal cannabis stores open in their wards, despite pitches from local and provincial store owners and stakeholders.

Councillors explained their issue with cannabis stores does not lie with the product itself, but with the lack of control over where the stores can be located and how many will surge into the community once the floodgates are opened.

Unlike alcohol, which is distributed only by the Province, private retailers are able to apply for licences to enter the cannabis market and open up shop. While municipalities can decide where LCBO or Beer Stores can operate within their cities, the Cannabis Control Act does not allow the same jurisdictional control for cannabis stores.

The Province also has not put a cap on the number of licences given out in each area.

“I do not want to see multiple stores opening where I have daycares, where I have parks, where I got youth drop-ins. And those are not under consideration when the AGCO (Alcohol and Gaming Commission) makes their decisions to issue a license,” said Ward 9 Councillor Pat Saito.

When it was legalized in Canada in 2018, the provincial and federal governments called the shots. The top tier government regulates the process of growing and licencing for medical or commercial use. Provincially, governments can say where and how it’s sold and where people can or cannot smoke or consume it. In Ontario, other provincial authority includes retail licenses, which falls under the purview of the AGCO.

Municipalities have the least amount of control, and can only opt in or out of allowing the stores to operate within their boundaries. When a city opts into having locations, they can’t reverse this decision. 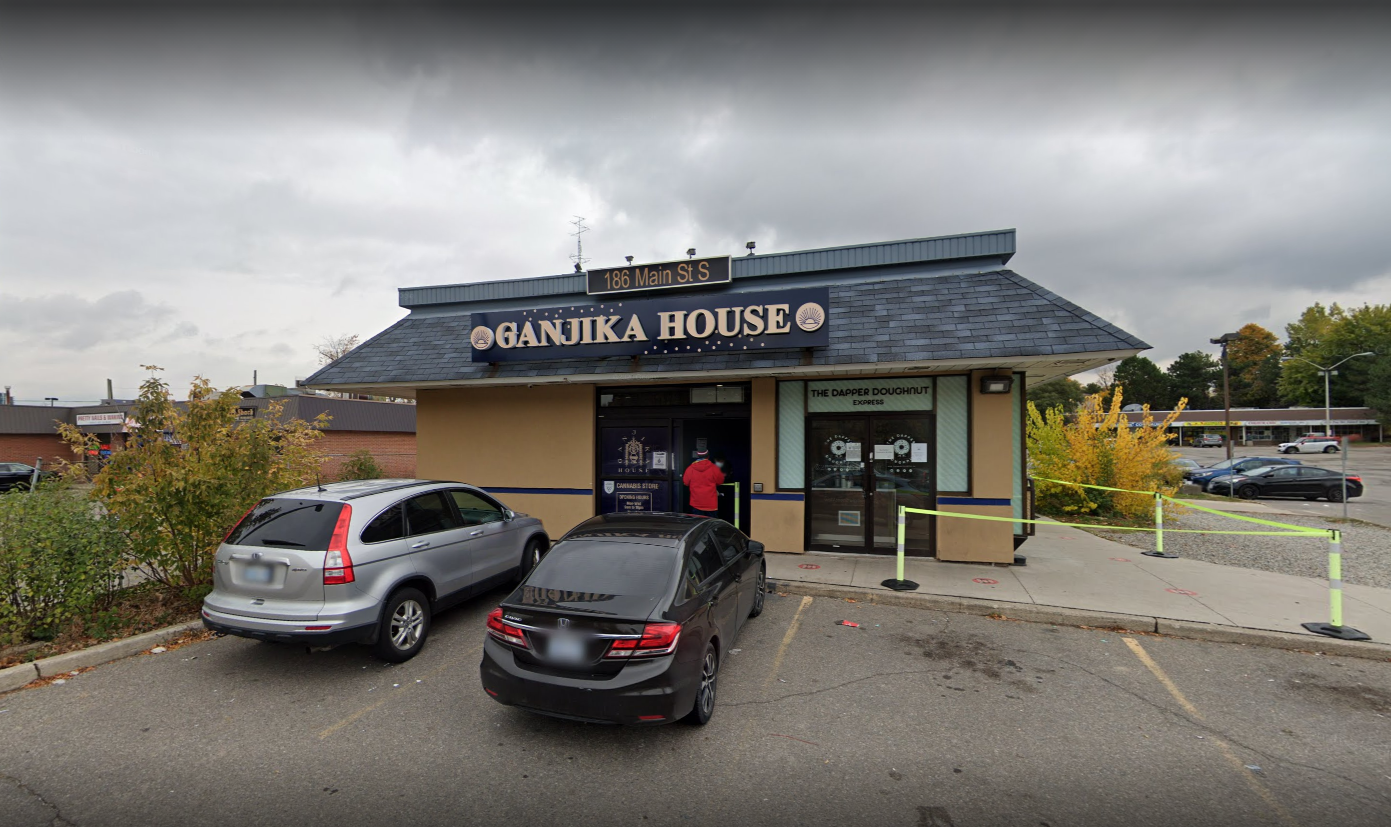 Ganjika House is the longest running legal dispensary in Brampton. Owner Clint Seukeran says many of his customers are also from nearby Mississauga. (Image from Google Maps)

A big issue for Mississauga council is the AGCO has a history of largely ignoring suggestions from municipalities on where stores should not be located. Before a licence is issued, there is a 15-day period where councils and constituents can provide feedback on the location of the shop. AGCO spoke to this specific issue Wednesday, which did not ease the minds of councillors.

“I don't have those stats, unfortunately. But they have not, I can say, resulted in a denial of the license,” said a spokesperson for the AGCO.

City staff put together a report gathering data from other nearby municipalities who opted in to allowing stores. The City of Hamilton provided policy guidelines to the AGCO outlining where they didn’t want cannabis stores located. The areas were designated as “sensitive”, and included locations with close proximity (within 300 metres) to schools, parks, and mental health/addiction centres.

In March, Hamilton City Council was met with a report from staff saying the AGCO had ignored this recommendation, allowing 29 stores to open in these designated areas. Guelph and Orillia had similar experiences with the AGCO licensing process, the report states.

The report from Hamilton staff also noted examples of stores being clustered in the same area. Mississauga councillors are worried that without control over where and how many stores could open, the city would face the same issue.

“At this time, there is no ability to restrict the number or location of stores by municipalities,” said Jeff Longhurst, director of licensing and regulation with the AGCO.

Cannabis is a booming and young industry in the country, amassing sales of approximately $2.6 billion across Canada last year. The clustering of stores, according to Longhurst, will most likely come to an end as the market for cannabis evens out. Under the Cannabis Control Act these stores don’t have much differentiation in the products they sell, which will lead to an eventual closure of stores who cannot compete.

Ward 2 Councillor Karen Ras has been on board with the idea of legal stores operating since legalization in 2018. She pushed a motion forward Wednesday urging council to allow the stores to operate in Mississauga. It was eventually defeated.

“We also don't object to the clustering of bars, whether it's in Streetsville, or Port Credit, and we know that there are issues and fights and violence after many Friday and Saturday nights,” said Councillor Ras, trying to combat the backlash.

Mayor Crombie, who grilled the AGCO representatives with questions on zoning and lack of city control, seconded Councillor Ras’s motion.

Right now, the AGCO is accepting about 30 new licences every week for stores across the province. Toronto has 231 locations, Brampton has 18 and there are 47 in Hamilton as of May 2021. At the time of the report, staff noted there are 772 locations across Ontario.

“Like I said, a free and open market, and demand and supply will determine which stores survive and which ones close,” said Longhurst.

Mississauga is the largest municipality which still doesn’t allow the selling of cannabis within city limits. Since the initial opting in or out period, eight of the 69 municipalities who initially opted out, have reversed their decision. 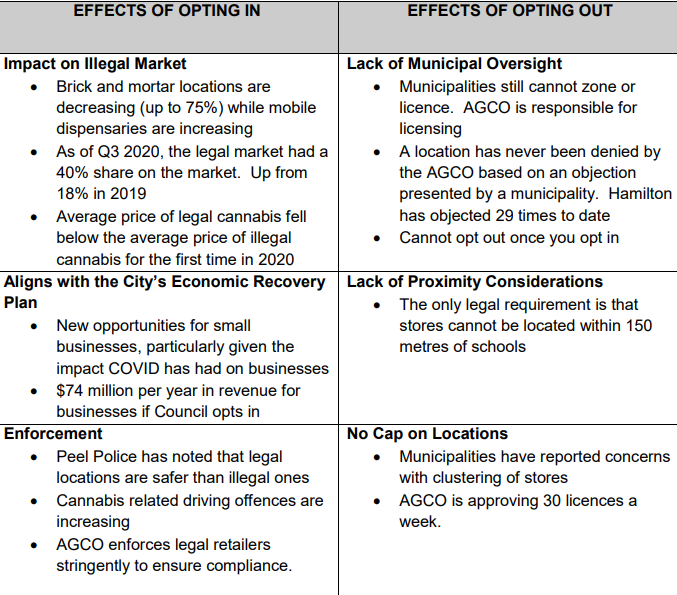 Concerns for a lack of control on zoning ultimately made the majority of council vote no for legal cannabis stores. (Source: Mississauga City Staff report)

Ward 7 Councillor Dipika Damerla was concerned the legal market would not be able to compete with the persistent illegal market.

“The nightmare is I get five or four clustered legal stores and the illegal stuff doesn't go away,” she said.

Toronto has the most legal stores in the province, but it still suffers from the largest amount of illegal websites and mobile cannabis delivery operations. The Pointer reached out to Toronto Police to ask if the black market is slowly dissipating following legalization.

“Despite legal dispensaries operating in Toronto, like all cities in Canada, we still see the illegal sale of cannabis. While we would not comment on regulated government prices, there will always be a demand for cheaper drugs,” said a spokesperson.

Illegal sources may be difficult to fully eradicate, but numbers from the Ontario Cannabis Store show the legal market is making progress. In the third quarter of 2020, 40 percent of cannabis sales in Ontario was done on the legal market, almost doubling the sale in the first quarter of the year. The various presenters at council said with the increased legalization of cannabis stores in cities, the illegal market will eventually become obsolete. 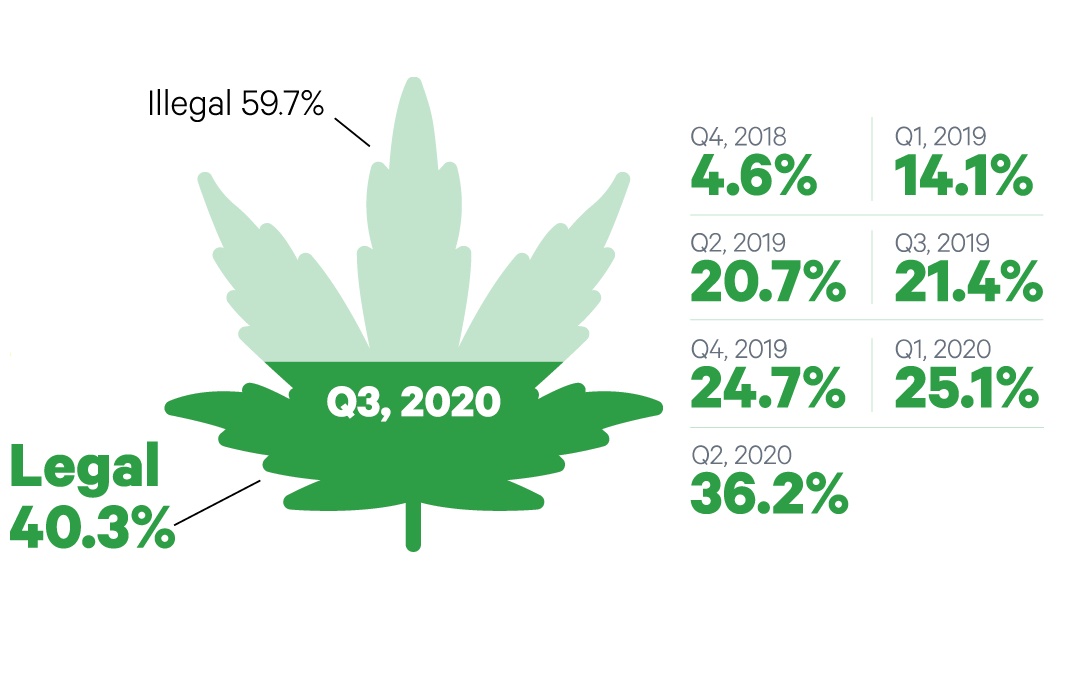 Since legalization in 2018, the illegal market for cannabis is slowly being impacted by the legal market. (Source: The Ontario Cannabis Store presentation)

In Peel, the rise of mobile offerings that allow people to order from an app or website, and illegal storefronts continue to be a headache for Peel Regional Police (PRP).

A mid-March report by the police force found when comparing the longest running illegal and legal storefronts there are big differences in safety. In 2020, police were called to Ganjika House in Brampton, a legal dispensary 20 times. Five of these calls resulted in minor reports, such as a breach of a court order, assault, ATM fraud and minor drug possession.

During the same period, police received 28 calls from North Cloud Dispensary in Mississauga, an illegal dispensary in Mississauga; 19 ended with a serious crime – stabbing, shooting and multiple weapons charges. Police were successful in shutting down the storefront in December 2020, after numerous attempts. The entire investigation cost Peel police $203,240.