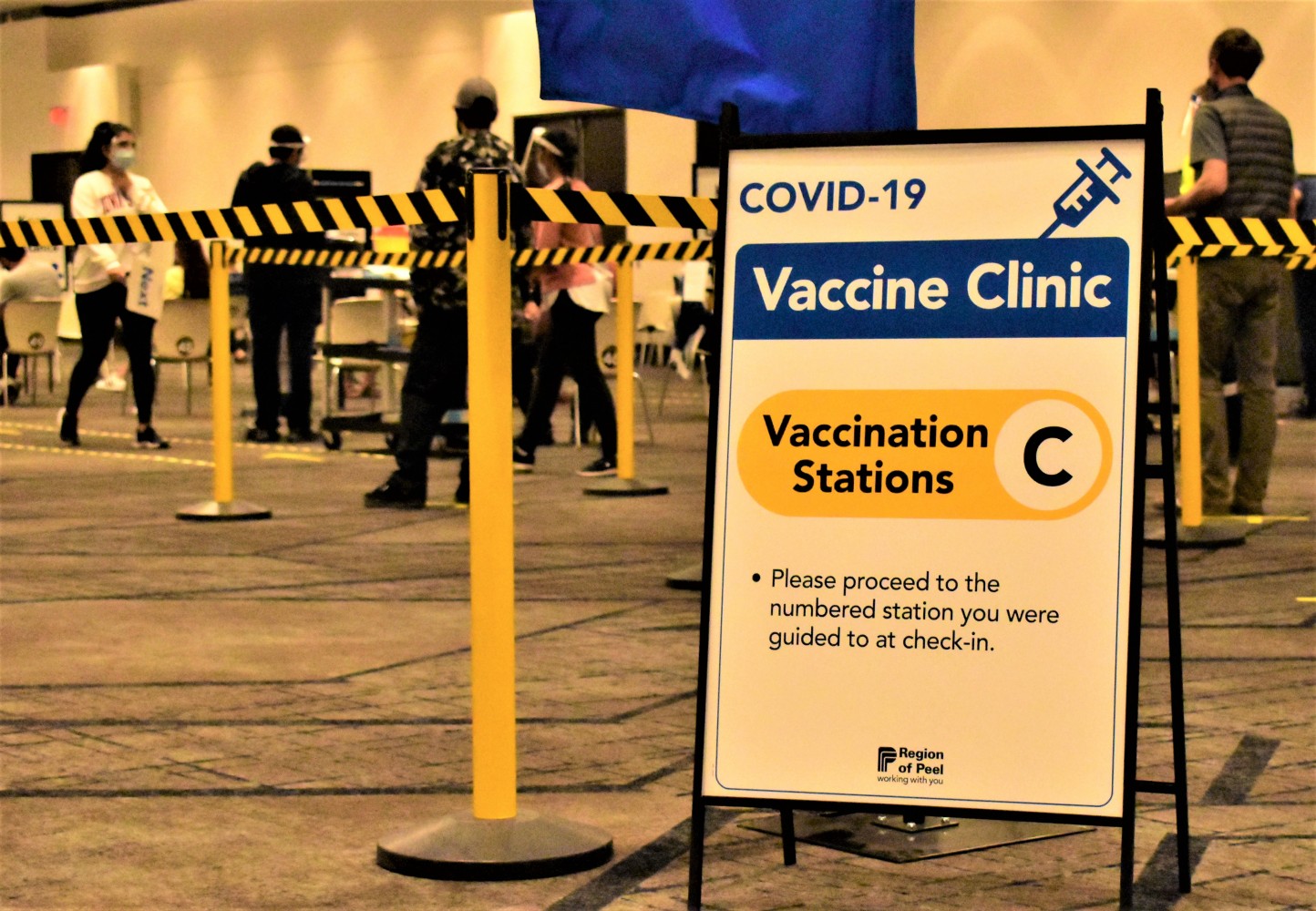 The B.1.617 COVID-19 variant, first discovered in India, now dubbed the delta variant, is spreading across Peel.

As of Friday, Peel Public Health (PPH) confirmed with The Pointer that there are 115 cases of the variant, which research suggests is more transmissible and severe than other variants. Public Health England found vaccine effectiveness against the variant was low with one dose, which is concerning for Peel where only 46,638 second doses have been administered, in a region with about 1.5 million residents.

The study was conducted with Pfizer-BioNTech and AstraZeneca, which after two weeks were shown to be 88 and 60 percent effective, respectively, against the delta variant. 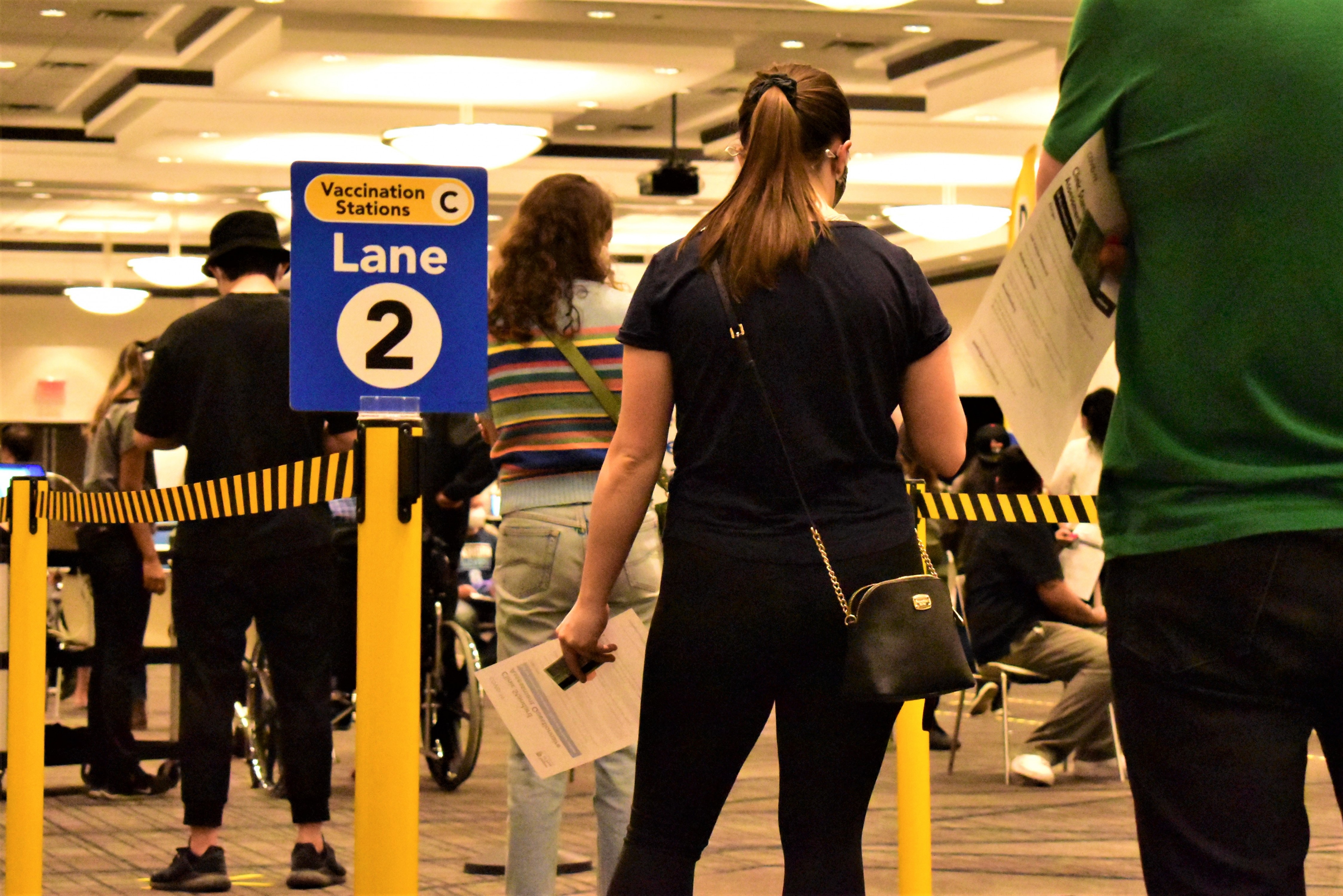 With only one dose after two weeks the vaccines were only 33 percent effective, compared to 50 percent effective after the first dose against the Alpha variant (first detected in the United Kingdom).

“The delta variant is shown to be the dominant variant in Peel within four weeks, and within eight weeks in the rest of Ontario,” Dr. Lawrence Loh, Peel’s top public health official, said.

Surveillance of the variant by PPH started at the beginning of May and shows it’s quietly infecting more people across the region. PPH confirmed with The Pointer the first case of the delta variant was found in April.

“Because the available testing (genetic sequencing) is done on a sample of variants, we do not know where the first case came from,” said a spokesperson for PPH.

Dr. Loh assured the community Peel is still ahead of the variant but the need to ramp up second doses is critical.

Mayor Bonnie Crombie and Mayor Patrick Brown are both calling again on the provincial government to give vaccine prioritization to Peel, so delta stops spreading at the recent rate. In May, ramped-up first dose allocation was given to the hotspot and helped bring COVID-19 infections down drastically.

On May 1, Peel was still averaging about 1,000 cases a day, but with the extra roll-out over the first two weeks of the month, numbers dropped to 363 by May 18. The extra allocation by the Province was only for the weeks of May 3 and 10, by May 22 there was a drop in vaccines being sent to Peel. But daily case numbers have continued to trend in the right direction, a reflection of the success of vaccines, even after just one dose. On Saturday, June 5, Health Minister Christine Elliott reported 123 new cases in Peel.

Officials are stressing this does not mean second doses should be ignored. Loh and others are stressing that every eligible resident in Peel should get both doses. This is the only way the pandemic will be defeated, otherwise we could see its ongoing impact well into the future.

May 22 was the peak of inoculations in Peel, since then the supply has been reduced showing less vaccines being administered. (Peel Public Health dashboard)

There are concerns about whether vaccines are being administered to people who live in hotspot postcodes. Peel opened up vaccinations to anyone over the age of 18 on May 7, not just in hotspot postal-code areas. The designated hotspot areas have residents that are more likely to be in lower income brackets and visible minorities, according to data and mapping from the Region of Peel.

The most recent figures show Peel has administered over 1.1 million first doses and 46,638 people are considered fully vaccinated. This means just over 72 percent of the adult population and 40 percent of those under the age of 18 have received at least one dose.

From May 21 (23,820 doses) to May 31 (14,043 doses) the number of vaccinations allocated to Peel has been almost cut in half, making a fourth wave more of a concern if residents don’t seek out an appointment.

The June 4 weekly epidemiological report shows test positivity has come down dramatically in six weeks, but remains high compared to numbers that indicate infection spread is under control.

As of May 22, Brampton’s positivity rate was 10.5 percent, less than half the figure from mid-April, while Peel’s overall rate was 9.1 percent, which is also about half the rate compared to six weeks ago. A test positivity of 2.5 percent or below indicates infection spread in a jurisdiction is under control. 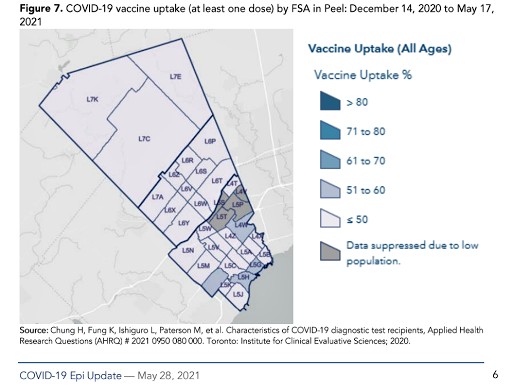 Communities in lower income neighbourhoods are not as well vaccinated as higher income areas. (PPH)

As of June 1, 13 percent of all vaccines in Ontario were administered in Peel, which has about 10.5 percent of the province’s population, but about 20 percent of the overall cases of viral infections that cause COVID-19.

“By getting residents in hotspots their second doses faster, we’ll protect the entire province from a potential fourth wave,” Mayor Crombie said Thursday at her weekly press conference.

“The risk of resurgence is real if we only have widespread first-dose coverage,” Dr. Loh said.

Many parents across the province were disappointed by the decision of the provincial government to keep schools closed for the rest of the academic year. Many were looking forward to going back just in time for graduation.

But public health officials said it was the right move to ensure a fourth wave does not emerge.

The Pointer asked PPH if it’s in favour of keeping schools closed. “The decision to continue online learning… represents a prudent decision in our community since the impacts of this new information (on the latest variant) are still being analyzed. Those analyses, in particular, are especially focused on confirming that a fourth wave could be forestalled by accelerating two dose coverage in communities that are seeing more delta variant activity such as Peel.”

With the risk of the delta variant in Peel, schools could have been a factor for a possible fourth wave.

Premier Doug Ford, along with Minister of Education, Stephen Lecce, announced their reasons for keeping schools closed this week. Questions were raised about the safety of schools throughout the pandemic. Both Ford and Lecce have insisted schools have been safe, yet now they want them to remain closed.

Daily case counts show Peel is coming out of the third wave and is readying for the first phase of reopening on June 14. (Region of Peel)

The next stage of reopening of the economy is set to happen June 14. Previously, the Province announced a roadmap which shows as of the 14th, outdoor dining, non-essential retail (at 15 percent capacity,) essential retail (at 25 percent capacity,) outdoor sports and fitness, day camps, campgrounds and outdoor pools will be allowed to open. Gatherings of up to 10 people will be allowed outside.

Meanwhile, the positive numbers have seen Peel hospitals slowly pulling out from a state of crisis. From the May 28 epidemiology report, hospitals were admitting 11 new patients a day. Acute care beds were at 91 percent capacity in Peel as of May 31, but intensive care capacity remained down to 80 percent capacity for the second week in a row, suggesting the recent crush of severe hospital cases might be subsiding. Capacity for ventilated beds went from 59 percent to 61 percent, indicating there is still plenty of pressure on Peel’s ICUs. Medical teams have said they are not out of the woods yet.