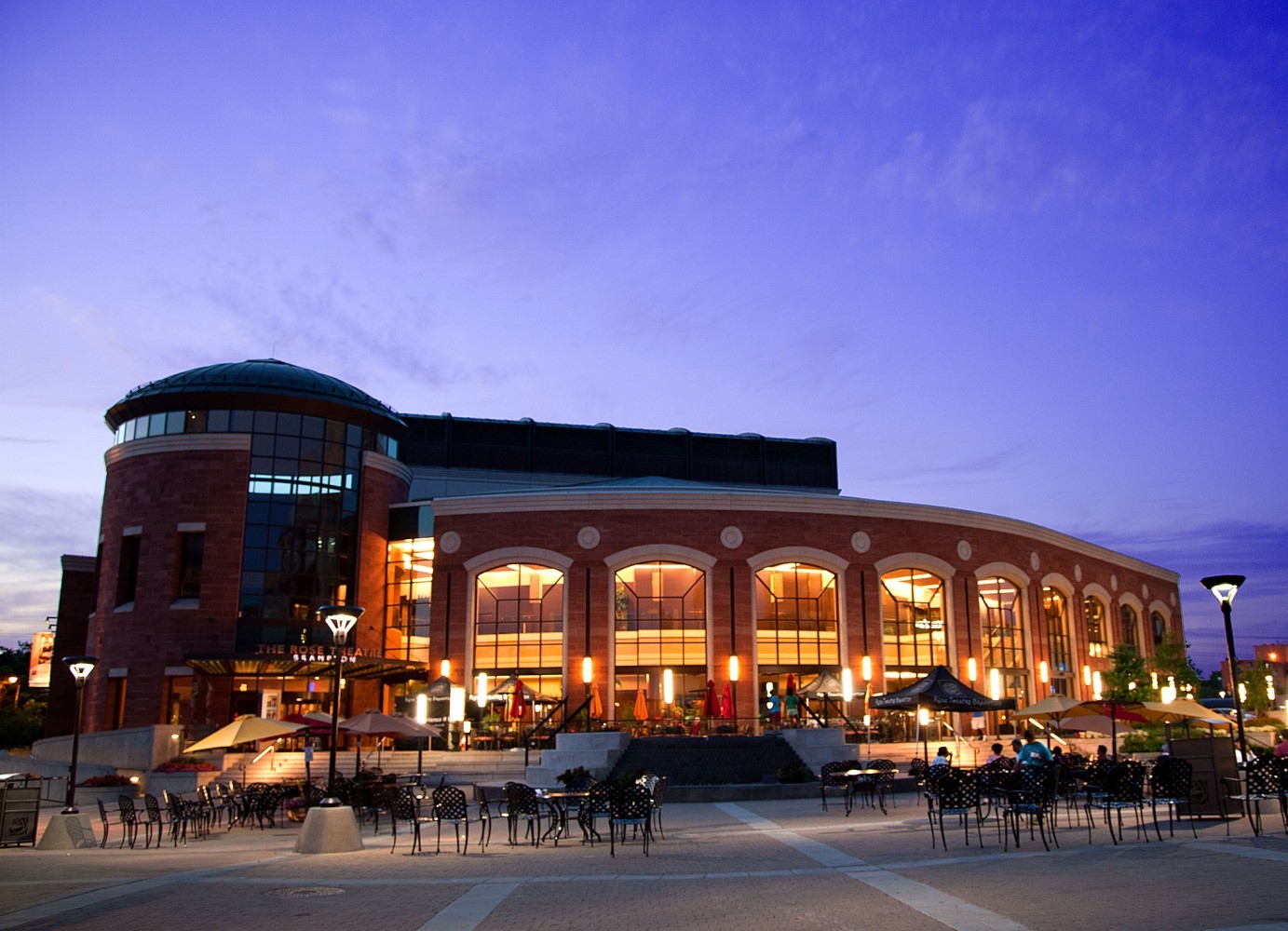 The Rose is one of Flower City’s most impressive features.

Sitting in the centre of downtown, a stone’s throw from The Four Corners, Council often boasts the theatre is the main representation of arts and culture in Brampton.

As a vocal member of the arts community, this frustrates Sharon Vandrish.

Because of this repeated association of the Rose as an iconic representation of artistic investment, she believes an outsized amount of funding and resources are put toward the theatre, leaving other areas of the arts in Brampton struggling.

The latest funding is a $4 million investment from the federal and provincial governments to improve accessibility and operating features in the 868-seat theatre, through the community, culture and recreation branch of the Investing in Canada Infrastructure Plan (ICIP).

The funding application opened on September 3, 2019, a staff report presented at Wednesday’s Committee of Council meeting states. Accessibility improvements include adding railings in the upper balcony, increasing accessible seating by replacing fixed seats with removable ones, and adding a wheelchair lift for outdoor stages, among other investments. Improvements will also focus on lighting upgrades for the stage and other parts of the building, and upgrading the video system from analog to digital.

Vandrish is all for improving accessibility, but funds for other features could have been better spent to restore or create an art space for all the artists in Brampton. “We could have had what we've been asking for, which is physical space, whether it's shared or not, to help us out.”

As the president of Brampton Music Theatre, she said the group has been without a permanent home for the past year after it was unable to pay rent due to revenue drying up during the pandemic. Other arts groups in Brampton have met a similar fate, she said.

“I just think if you're going to invest in infrastructure, I would have done it for a building, an arts hub, that everybody can share or benefit from… that's just a lot of money to me that they're just throwing away.” 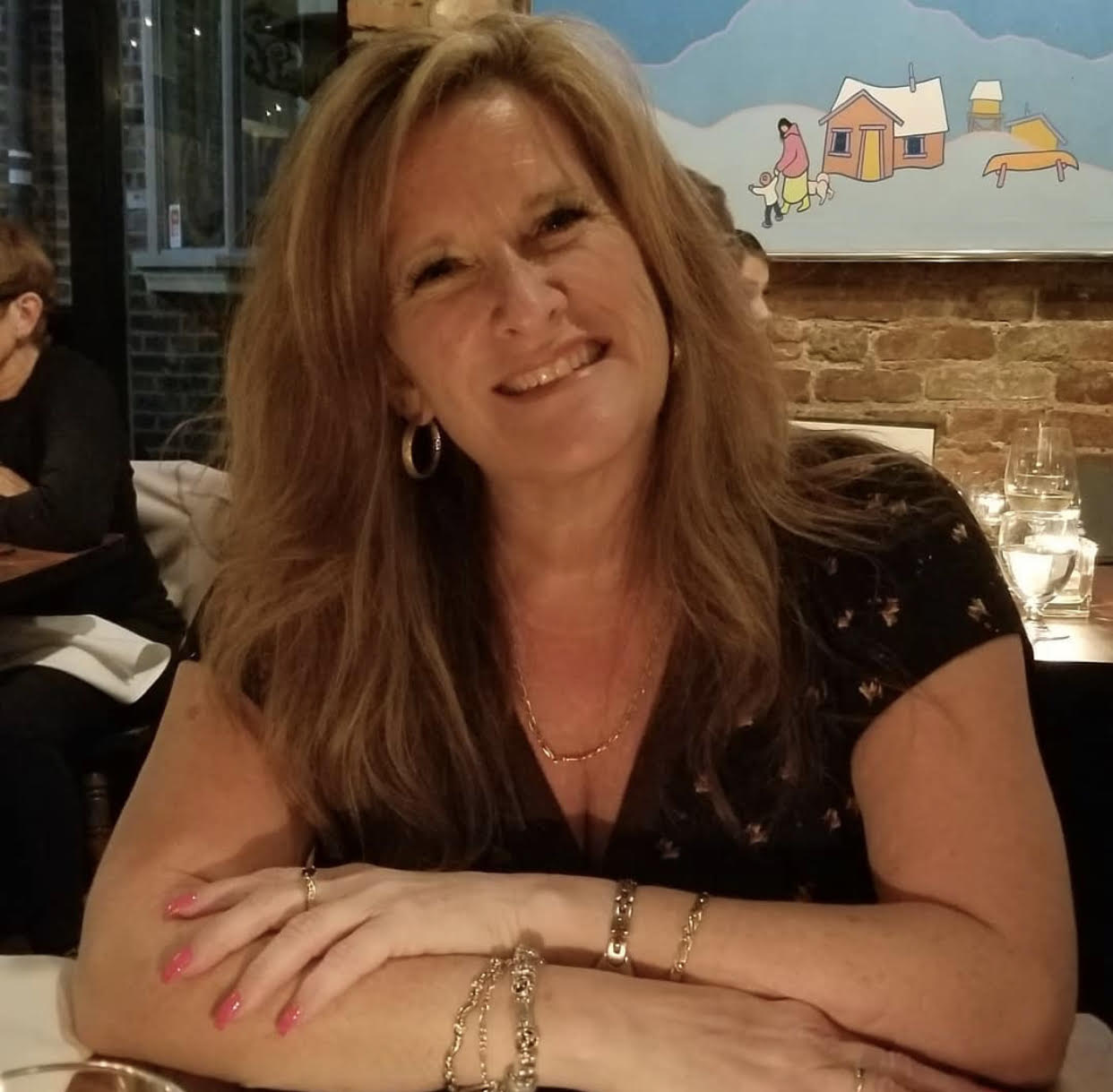 Having visited theatres across the GTA, Vandrish says apart from the Living Arts Centre in Mississauga, The Rose is one of the best, and with its relatively young age (it was built in 2006) “it is not old enough to be rejuvenated,” she says.

Funding for the arts in Brampton is incredibly low compared to other Ontario municipalities. It’s something Vandrish and the BACC have raised with local councillors many times before.

In a February 2019 presentation to council, the group illustrated just how bad things were in the city.

At the time, using a conservative population estimate of 594,000 residents, the city was putting less than a dollar per person toward the arts, the lowest among Canada’s big cities. Brampton had no city staff or board members dedicated toward an arts council at the time. Mississauga was putting $2.76 toward the arts for each resident, and had 4 staff members and 17 arts directors at the time. 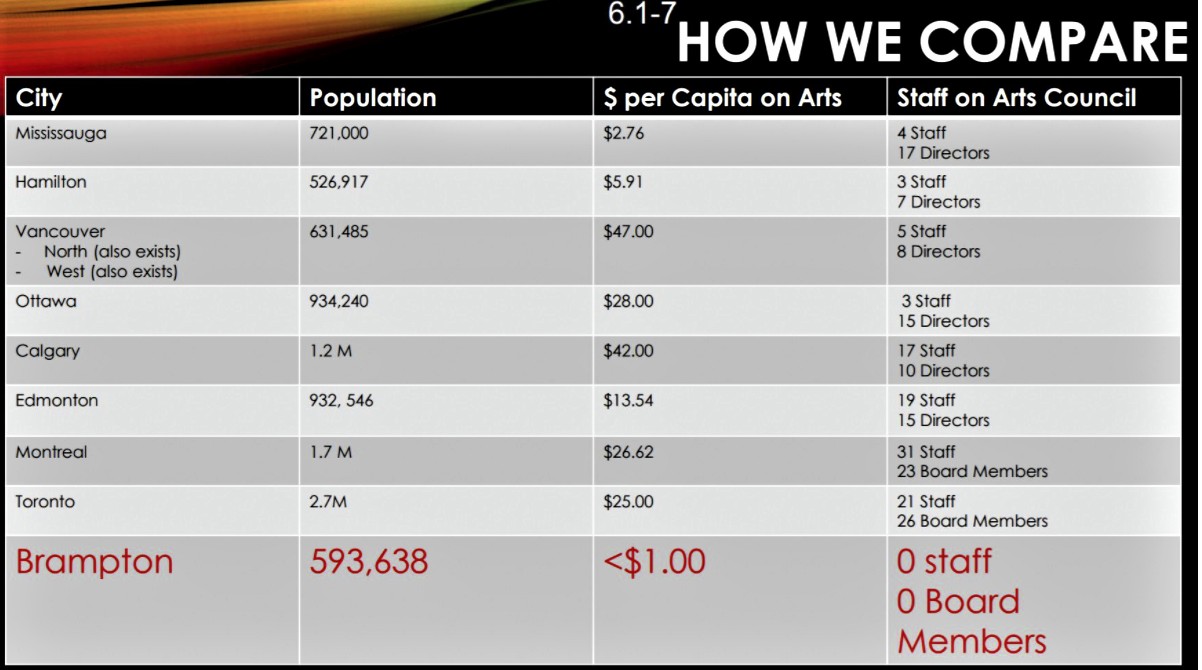 Brampton’s funding for the arts is a fraction of what other big cities in Canada invest. (Image from the BACC)

The City owns four arts facilities in the City: The Rose, and its outdoor space Garden Square, the Lester B. Pearson Memorial Theatre, and Cyril Clark, a smaller setting with 187 seats. Examining budgets approved by this term of council shows The Rose and Garden Square are the only two art facilities owned by the City to specifically be listed for improvements. While others could potentially be listed under “performing arts strategy” and its miniscule budget in comparison to money specifically spent on The Rose, there’s no detail for what this strategy entails.

“The City puts a lot of money behind promoting the arts at the Rose Theatre, but there's stuff going on all over,” Vandrish said.

The City has in the past been criticized for the management of the Rose. In 2019, it lost almost a million dollars. Critics have asked why it sits empty without events or performances scheduled for long stretches and members of Brampton’s diverse arts communities have voiced concern over the lack of reflective cultural programming in the past.

According to the 2021 budget document, the account had negative $11.6 million as of the third quarter of 2020. The City contributed $76.2 million this year but it’s not clear how much is currently in the reserve. The Pointer asked the City for details but didn’t receive a response ahead of publication.

Up until September, the City also had a dedicated theatre capital improvement (TCI) fund. Enacted in 1994, $2 from every ticket over $6 was put in reserves and used toward capital improvements for City theatres. At a Committee of Council meeting in September, council voted to close this reserve after a staff report labelled it redundant, and cancelled the $2 charge. Remaining funds were transferred to the asset repair and replacement reserve. The 2021 budget shows $292,000 was in the reserve during the third quarter of 2020.

This was one of the five reserves that allowed Mayor Patrick Brown to get his string of tax freezes since coming into office. Staff had to find a way to save $5 million to give the mayor the politically popular achievement he demanded and the TCI reserve saw a $150,000 reduction, according to an August 2020 staff report. No money was added to this reserve in the 2020 budget.

While Vandrish feels extremely frustrated that money is going toward the latest project when other venues are struggling, she doesn’t believe The Rose, or any other arts-related venue in Brampton, is a “money pit”, a term many have used to describe the Rose due to the large amounts of money taxpayers continue to subsidize to keep it running.

“The problem is that you can't look at a theatre space as a revenue generating vessel, you have to look at it as a place to create art,” Vandrish said. “We’re not Broadway, we're not Mirvish (Theatre).”

Thinking needs to shift and support for the arts has to be provided instead of assuming it will be a self-funding venture, especially given all forms of art don’t generate the same amount of revenue. For example, more profit could be generated at a theatre than an art gallery, because there’s usually more space for people to attend and tickets to be sold, and there should be more productions to host.

The perception of “the arts” in Brampton also needs to change to allow for equal funding, and Vandrish believes it will be up to the City’s new arts council, known as The Agency, to bring this awareness and promote the arts throughout the city. 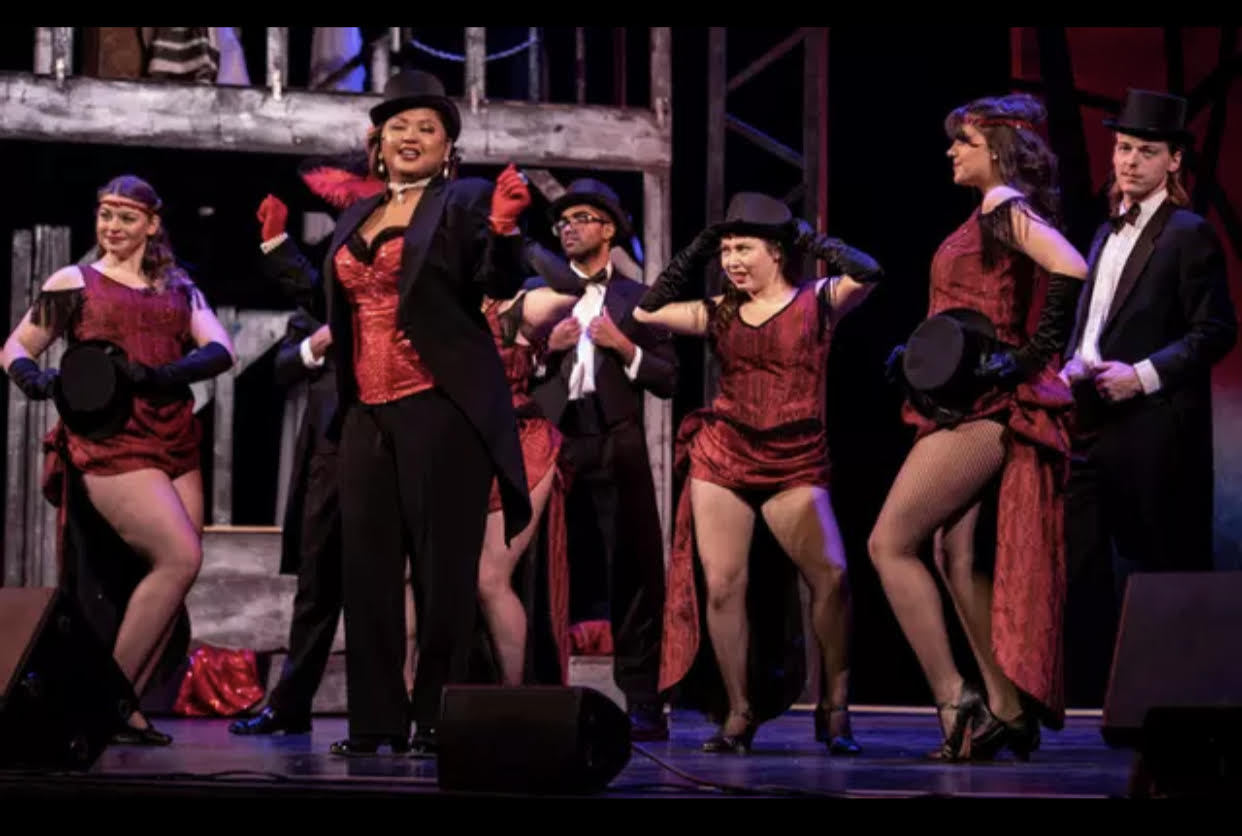 Council approved The Agency in January 2019 to help Brampton’s dying creative industries. Nuvi Sidhu, a project management consultant with experience working with local artists, was hired as the chair of the panel. Regional Councillor Rowena Santos was appointed as Council’s representative by her colleagues in March.

Five other members will be selected but only one member will be under the official title of “artist.” All positions are voluntary and unpaid. Panel members will transition to the board of directors for The Agency when it becomes an independent non-profit organization, anticipated for 2023.

Vandrish has taken issue with only one artist being on the panel. “Some Arts Councils in Canada are indeed governed by artists because they know what you're doing. Why would City Council not trust [the city’s] artists to be part of this new leadership team,” she questioned.

Vandrish has delegated to council four times on behalf of the Brampton Arts Coalition Committee (BACC) over the lack of inclusivity, and has felt that while council has listened to her out of respect, they didn’t hear the concerns of the people she represents.

She delegated to council on the matter for the fourth time in March, asking for more artists to be on the board. Jason Tamming, the director of strategic communications, culture and events, said it’s better to keep the panel members as they are because down the road, other opportunities for subcommittees, that may not have voting authority, will come up and could offer more opportunities for artists to be involved.

Vandrish told The Pointer she resigned from her position with the BACC soon after because she was frustrated with feeling her voice, and the voices of many other artists, were being ignored by Council.

“Many of us are tired. Some of us leaders that have been here for quite some time are really feeling the impact of lack of support for almost a decade now.”