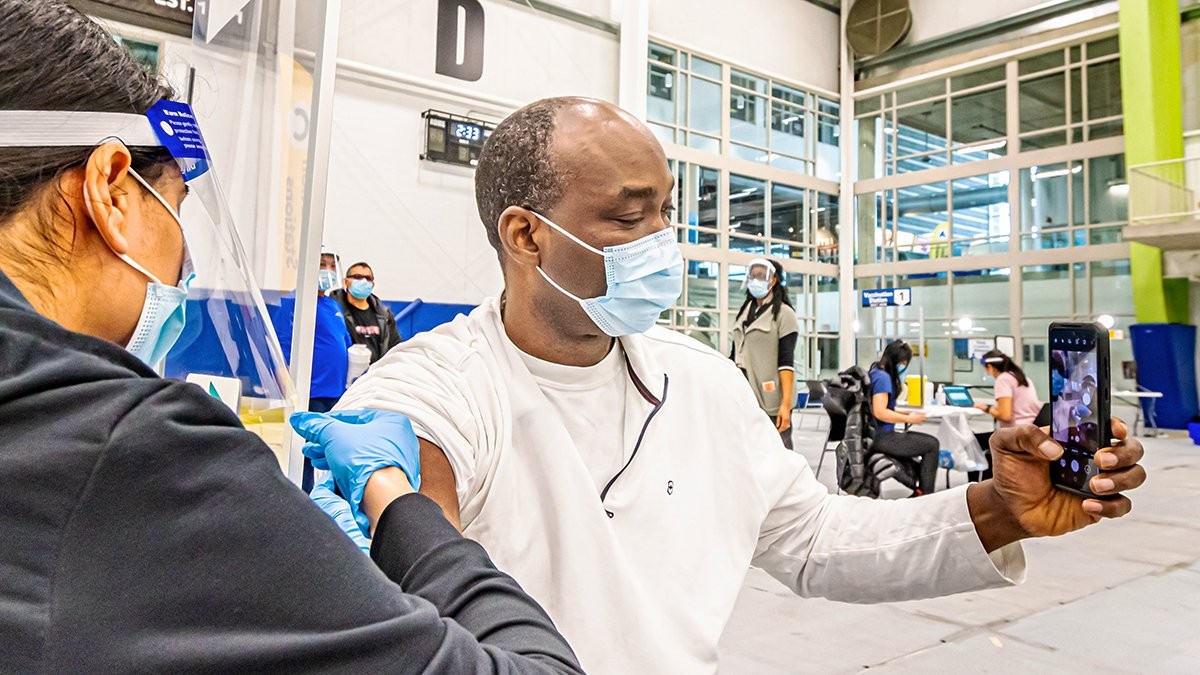 Photos from Region of Peel-Twitter/Government of Ontario

GAME CHANGER: All adults in Peel hotspots will be able to book a vaccine starting May 3

All adults in Peel hotspots will finally be able to book a vaccine through the provincial system after months of advocacy for the devastated region fell on deaf ears.

The PC government has failed to prioritize hotspots and essential workers across Peel, but Thursday’s news has finally lifted spirits in one of the country’s hardest hit regions.

“Peel Public Health welcomes the news by the Province that beginning on May 3, residents who are 18 and older and living in hot spots will be eligible for vaccination,” Ashleigh Hawkins, a spokesperson for Peel Public Health, told The Pointer. “This is great news for our residents, as it removes some of the confusion and challenges that have been presented by supply management and prioritization to date.”

Starting next week, residents residing in designated hotspots, which are categorized using the first three characters of a postal code, will be able to use the provincial booking system online or on the phone at 1-888-999-6488. Previously, residents 18 and older were only able to secure vaccines through pop-up and community vaccination sites.

The announcement was part of the news revealed earlier Thursday that hotspots will be receiving 50 percent of Ontario’s vaccine allocation for the first two weeks of May. The new strategy, which was a key recommendation from the Ontario COVID-19 Science Advisory Table, means Peel adults should be able to get a first dose weeks ahead of the Province’s latest vaccine rollout schedule that aims to have every adult in the province eligible to book a COVID-19 vaccine appointment by May 24.

The Province has released an optimistic schedule for the month of May that gives some essential workers vaccine eligibility starting May 3, with the rest starting May 10. Ontario is expecting 4,089,150 doses of the Pfizer vaccine in May; 388,100 doses of Moderna for the week of May 10; and is waiting for confirmation of shipments for AstraZeneca and Johnson & Johnson.

According to the Province’s press release, the extra allocation to hotspots won’t take away from other public health units’ supply, which will remain the same as previously planned, increasing throughout next month.

“It will also allow us to make full use of existing capacity that has been built, which has been delivering 100,000 doses a week across our system in Peel and is adding capacity throughout the month of May,” Hawkins said. “Along with the expansion of our mobile offerings, we now have the flexibility to vaccinate quickly and get to 70 percent [of] first doses in our community by mid-June or sooner.”

In Peel, 25 of its postal-code-areas, out of a total of 33, are considered hotspots. They make up about 22 percent of the Province’s 114 designated hotspots.

“Today’s announcement by the Province is incredibly important for Mississauga and all of Peel Region,” Mississauga Mayor Bonnie Crombie told The Pointer.

“Peel has been one of the hardest hit regions in the country since the onset of the pandemic, and we have been in extended lockdown since November 23. This new accelerated vaccine timeline will allow us to get needles into the arms of all our residents faster.”

“Thank you for listening to our concerns and taking action. Today’s announcement is also important as it gives clarity to all of our residents as to when they can expect to be eligible for the vaccine.”

But she emphasized the need to ensure Peel receives the vaccine allocation needed to make good on the new, accelerated plan.

“The sooner people in hot spots like Peel are vaccinated, the sooner the rest of the province can return to normal. I’m also continuing to advocate to the Province that all of Peel Region be considered a hot spot, as only a handful of postal codes in Peel are currently not considered one by the Province.”

She said Peel Public Health is working on communications material that will be blasted out and available through all the municipal and Regional websites, so residents will have all the details needed to book appointments and get to vaccination sites.

Crombie said adding a few more Mississauga postal-code-areas and one in Caledon to the hotspot list would cover off the whole Region, ensuring transmission can finally be kept in check.

“Peel is a very unique region, housing more warehouses, factories, distribution centers, food processing and packaging plants than anywhere else in the GTA. We're home to an incredibly large population of essential workers who have gone into very crowded workplaces, day in and day out, to provide us all with the products that we rely on, and that we need to survive. They keep our economy running. Our essential workers live in every corner of this region.”

According to data from the non-profit research group ICES, much of Peel remains unvaccinated. Despite having over a fifth of the Province’s total postal code hotspot areas and about 20 percent of all infections, Peel has only started to get vaccine shipments proportionate to its population over the past few weeks.

While many are rejoicing over the news, others are concerned about the local public health unit and the Province’s ability to meet the surge of demand the new eligibility will create.

“Being eligible for a vaccine and actually being able to book an appointment is another thing,” said Jennifer, a 32-year-old Brampton resident who didn’t want to use her name to protect her husband, an essential worker. “The system is just going to get overloaded, and it's going to be so slow – I just can't see everyone being able to get an appointment right away. And at the same time, when they do open it up, again, it's the people working from home who are going to have access first. This does nothing to address the fact that there are people who work during the day, and they're not in front of a computer, [or] they can't be in front of a phone. It does nothing to put vaccines where they need to be.”

For Rhonda Collis, a retired community development worker for Peel Public Health, who lives in Brampton, the news represents a huge step in the right direction. But Collis says she’s still holding her breath, after the local public health unit’s recent decision to prioritize mass vaccination sites over mobile and pop-up community sites which would have reached more essential workers.

“I still am disheartened and disillusioned when I look at the decision making strategies that Peel Public Health has, and the lens that they've been using,” said Collis, who worked for the public health unit for more than 20 years. “I still believe it fits within the definition of systemic discrimination, and I am going to hope that they will reflect on that, as I was told in a [community response] meeting that they are doing.”

Mississauga Ward 5 Councillor Carolyn Parrish has also voiced her criticism of Peel Public Health, and its head, Dr. Lawrence Loh, most recently over a badly managed vaccine program for Malton residents in Etobicoke, which was almost completely booked up before her constituents even had a chance to find an available appointment.

“I am being cautious because we've had these announcements before from the province, and then you find out, no it's not gonna be implemented that way here in Mississauga,” said Parrish, whose ward includes Malton, the hardest hit area of the city.

“And Dr. Loh has his own way of doing things. He is very much enamored [by] the regular mass vaccination clinics and doing the vaccinations by age group [and] dropping five or 10 years each couple of weeks. So the fact that we’ll plunge right into 18-year-olds... I’m very excited, but also very cautious.”