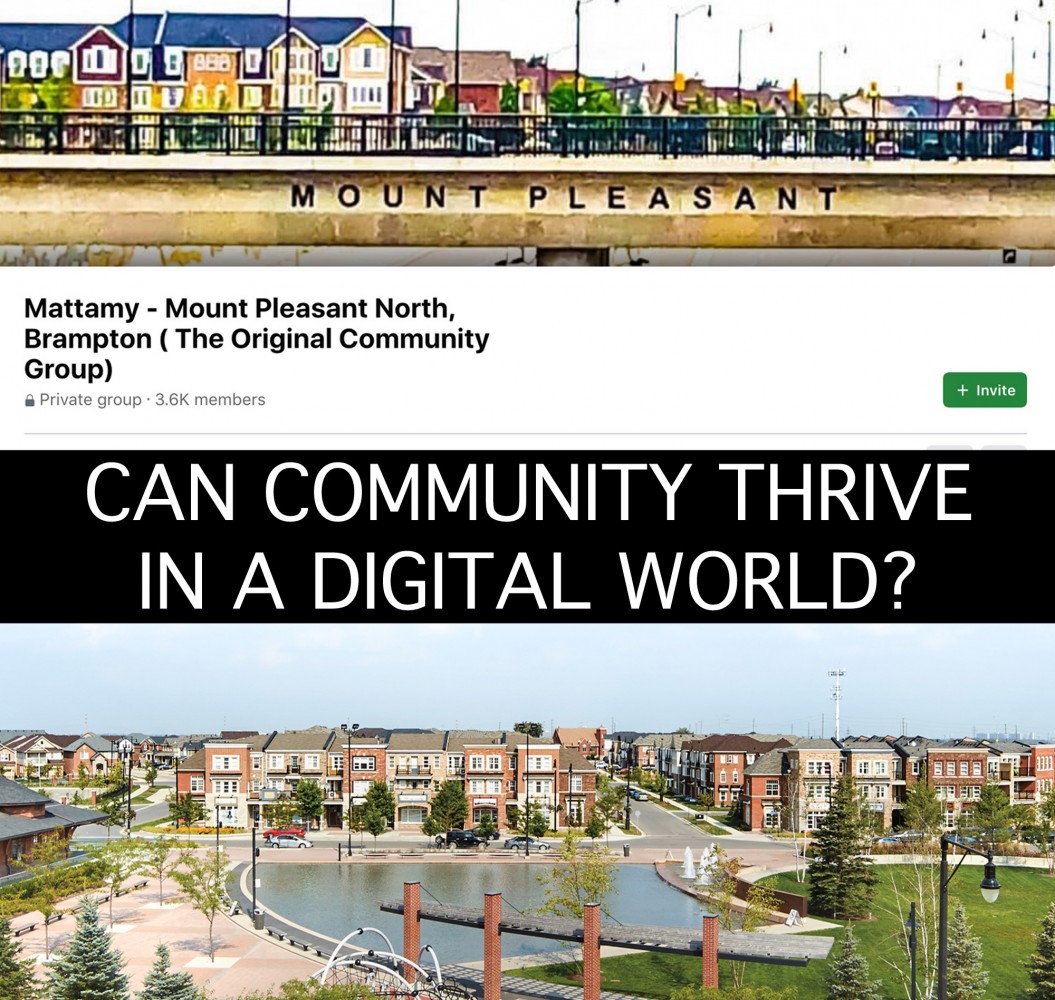 In rapidly growing Brampton, a Facebook group is working to save community spirit

The Pointer's Social Media Monitor is a weekly look at how elected officials and other public civil servants are using their taxpayer-funded resources to shape digital communication aimed at constituents. We also feature social media's role in shaping the communities The Pointer covers.

At the time, the Flower City was a little different. The 2001 Census pegged its population at 325,428 residents, rising to 433,806 by 2006. At the start of the millennium, Brampton was half the size it is now and the pace of life just seemed slower.

Years later, Macri returned, expecting to pick up where he left off. But the small suburb he remembered from a decade earlier was gone. In its place, a rapidly growing city was struggling with a single full-service hospital, dangerously fast roads and hopelessly underfunded addiction services.

It was a far cry from the community he thought he was returning to.

“Back in 2014, I returned to Brampton and I purchased a house thinking it was the same Brampton that I left years ago,” he told The Pointer. “If you accidentally dialled 911, the police would come to the door to double check, it didn’t matter what happened. That’s how things used to work.”

Macri had purchased a house in the brand new, planned community known as Mount Pleasant North. The experienced tradesman became conscious something was missing as he was adding the finishing touches to his new forever home and getting ready to meet his neighbours. Ivan Macri has brought his local community together using a Facebook group.

In particular, he felt two things had changed: visible crime had risen and neighbourhood community spirit was waning.

The two factors are directly linked. In a close-knit neighbourhood, crimes such as theft tend to be more rare, with neighbours watching out for one another, even if someone’s home is empty for a while. Locals are able to remind each other to lock their cars at night or report anything suspicious. Familiarity with other residents makes it instantly easier to notice someone up to no good.

It was then, as he wondered where the sense of community had disappeared to, that Macri was added to a Facebook group. Officially titled Mattamy - Mount Pleasant North, Brampton ( The Original Community Group), it had around 700 members.

They hailed from across Ontario, there was a ban on local businesses advertising, but open, constructive discussion slowly started to lose its way. Finally, recognizing a chance to create the community he felt was missing, Macri threw himself in, headfirst. 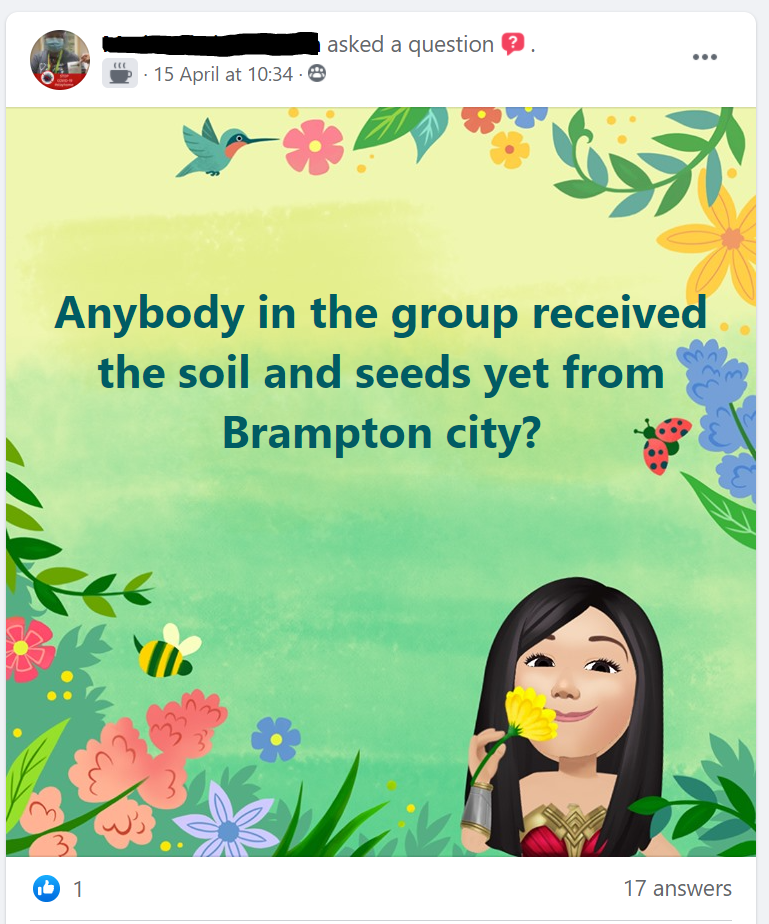 Local residents share tips or queries that impact the community

Now, he runs some 13 local Facebook groups. They range from a virtual community focusing on road safety, another promoting local businesses, raising awareness around litter collection in the city and the original Mount Pleasant group. The latter now has 3,600 members and receives focused energy and attention from several administrators, led by Macri.

The concept of a community group in itself is not unique, Facebook is strewn with such pages of varying levels of usefulness. Some were created to organize a specific pot luck dinner, others for a soccer team you stopped playing for after high school. Yet more are for transit enthusiasts to gather together or fans of a particular television show to trade memes.

At the local level, groups often go one of two ways: political squabbles or a deluge of bartering between residents looking to buy and sell (Brampton has no shortage of either). Macri has tried to focus his work, especially the Mount Pleasant North Facebook group, around community and people.

He is creating a space for genuine connection. 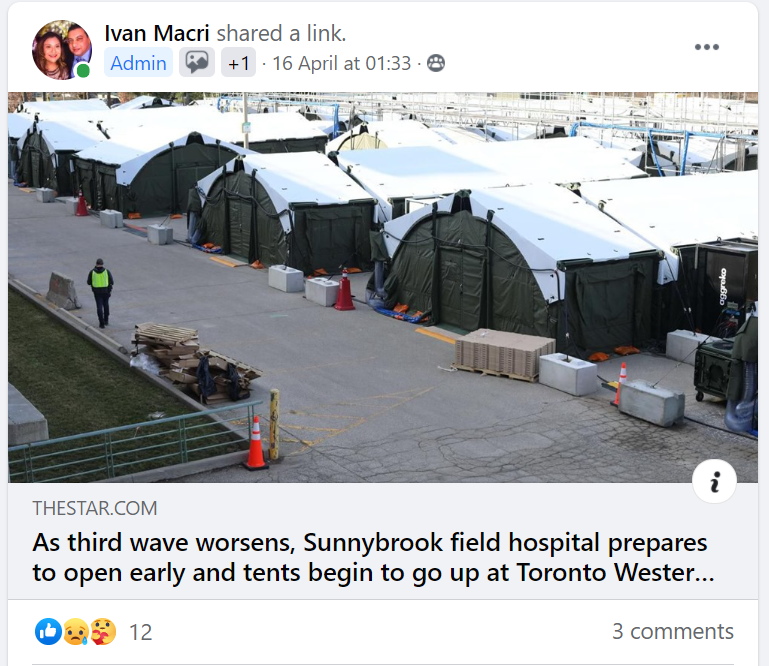 Macri posts in the group to spark discussion around the news, community and public safety.

In order to create a different type of community group, Macri has put work into the project both on and offline. Before the COVID-19 pandemic, he organized soccer coaching for local children and set up a chocolate egg hunt at Easter. He’s had local businesses offer raffle prizes and pooled the neighbourhood’s skills.

His techniques are a way to navigate some of the issues with Facebook or Twitter conversations. Instead of filling his group with angry, faceless people trading hostile values and angry political views, he is putting a name to the face. It means the community can use Facebook to work together, rather than as a space to highlight differences.

“Before, anyone could join the group as long as they lived in Ontario,” Macri said, explaining he wanted to limit members to the local community to maximize the group’s focus and appeal. “Immediately I changed the rules, we don’t need to have people from Toronto, people from Mississauga, even people from Brampton if they’re on the other side of the city. What interest would they have in a community group that’s focused on one neighbourhood?”

Inside the group, there is evidence of real commonality, the type of vibe once common up and down a tight-knit residential street. It has grown from 700 members to around 3,600 and local conversations abound: Is Rogers cell network down? (Yes, it was.) Can anyone recommend a dentist? (Dentistry at Mt Pleasant Square.) Can home renovations that began before the-stay-at-home-order continue? (The poster believes they can.) 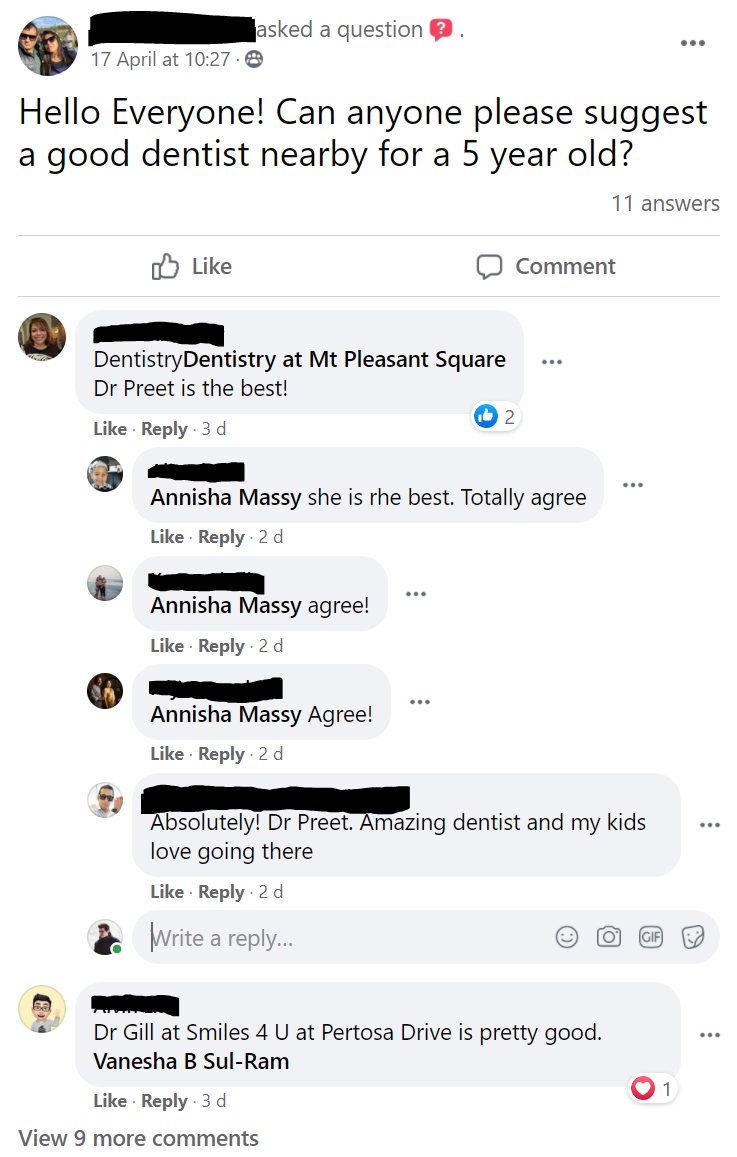 Locals share recommendations and advice with others in the community.

Macri speaks fondly of the recognition he has received from politicians for his work. He has been acknowledged as an important community organizer by MPPs and councillors alike. Many local politicians benefit from the structure he has created, allowing them a space to meet residents online.

Local businesses also feel the positives, allowed to advertise for free within the group. It's a way for north Brampton residents to support their local contractors and suppliers, Macri says, at a time when they’re struggling. “The community engagement in the group, it’s just amazing,” he said. “People have become friends because of it, people engage with businesses.”

As Brampton continues to grow, with plans for greater density around transit centres, the city will change again. Its current state as a busy and sprawling suburb will be replaced by something more akin to a modern urban centre. Rapid population growth, a lack of new space for subdivisions and climate targets will force developers and planners to build upwards.

The next few decades will see condo towers spring up. At Steeles Avenue and Hurontario Street, RioCan is already busy preparing to convert its shopping mall into a dense, residential mixed-use community.

Data on the City of Brampton's website show previous and planned population growth.

For many other cities around the world, this transformation to faceless highrises can make them cold and disconnected. Some rapidly growing cities around the world are infamously inhospitable to newcomers, with locals constantly in a hurry and no front sidewalk for those random, happy collisions that bring neighbours together.

Facebook groups built on the model Macri has developed preserve those lost local neighbourhood conversations. They keep residents in the city connected, even as it changes, introducing strangers who become friends and cultures that borrow from one another. It’s the best of social media. Bramptonians, thanks to neighbours like Macri, experience a sense of community that can’t be snuffed out.

“My main thing from creating these groups was to create the good neighbour spirit that was disappearing,” he said.