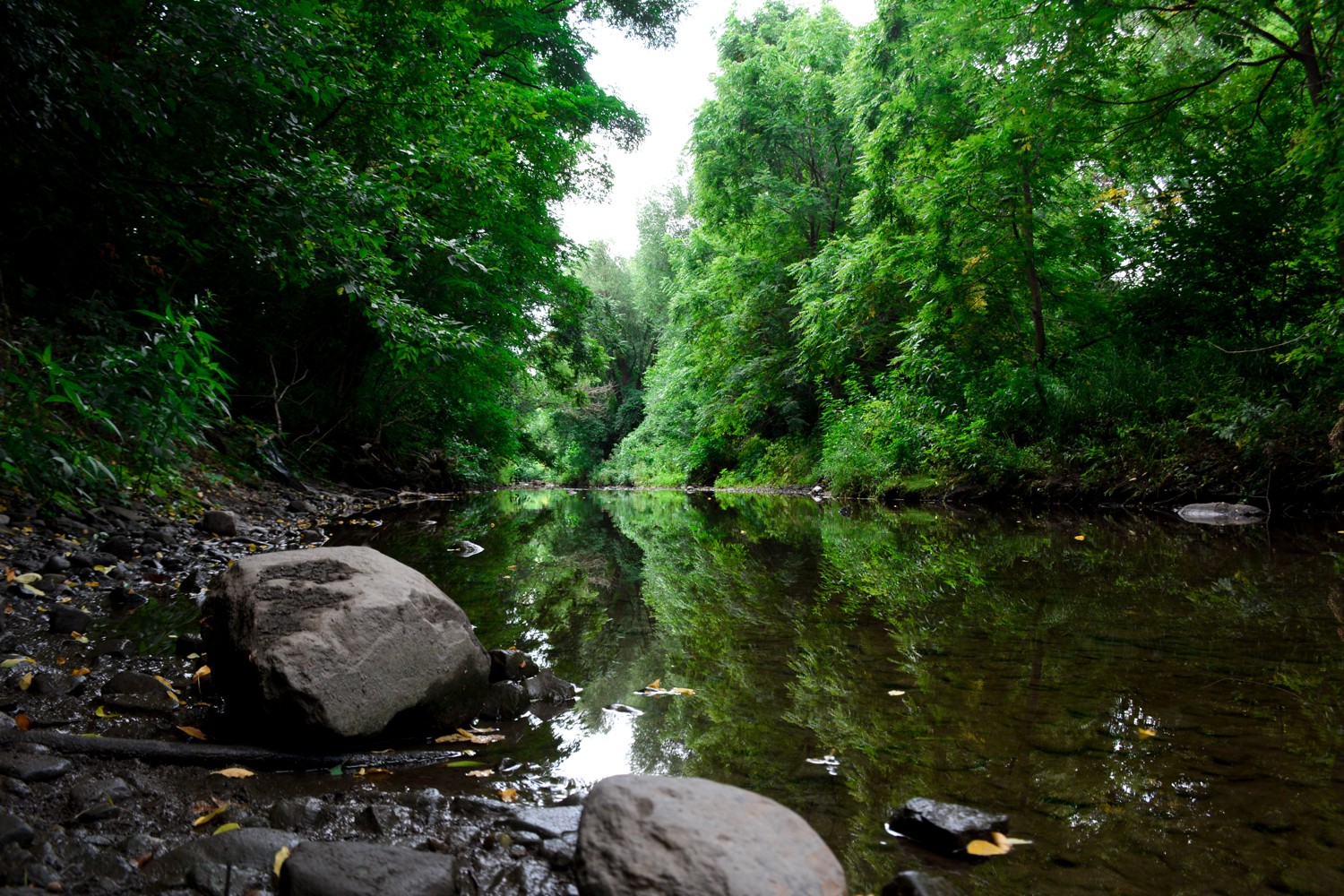 The Brampton Grow Green Environmental Master Plan (EMP), the City’s first comprehensive strategy focusing on sustainability and reducing the municipality’s footprint on everything from greenhouse gas emissions, to water usage, to land use and waste, was released in 2014. The plan outlined ambitious goals for addressing a number of environmental concerns, both within the City’s organization and the community.

The plan’s first update shows the City failed to reach the majority of its goals, on target for only 3 of 20, and has omitted key details that would explain what went wrong, and how far the City still has to go. Aside from referring to a number of educational campaigns, it’s unclear what the City did for the past five years. Educational campaigns can be incredibly powerful, but only when they are followed by concrete action. 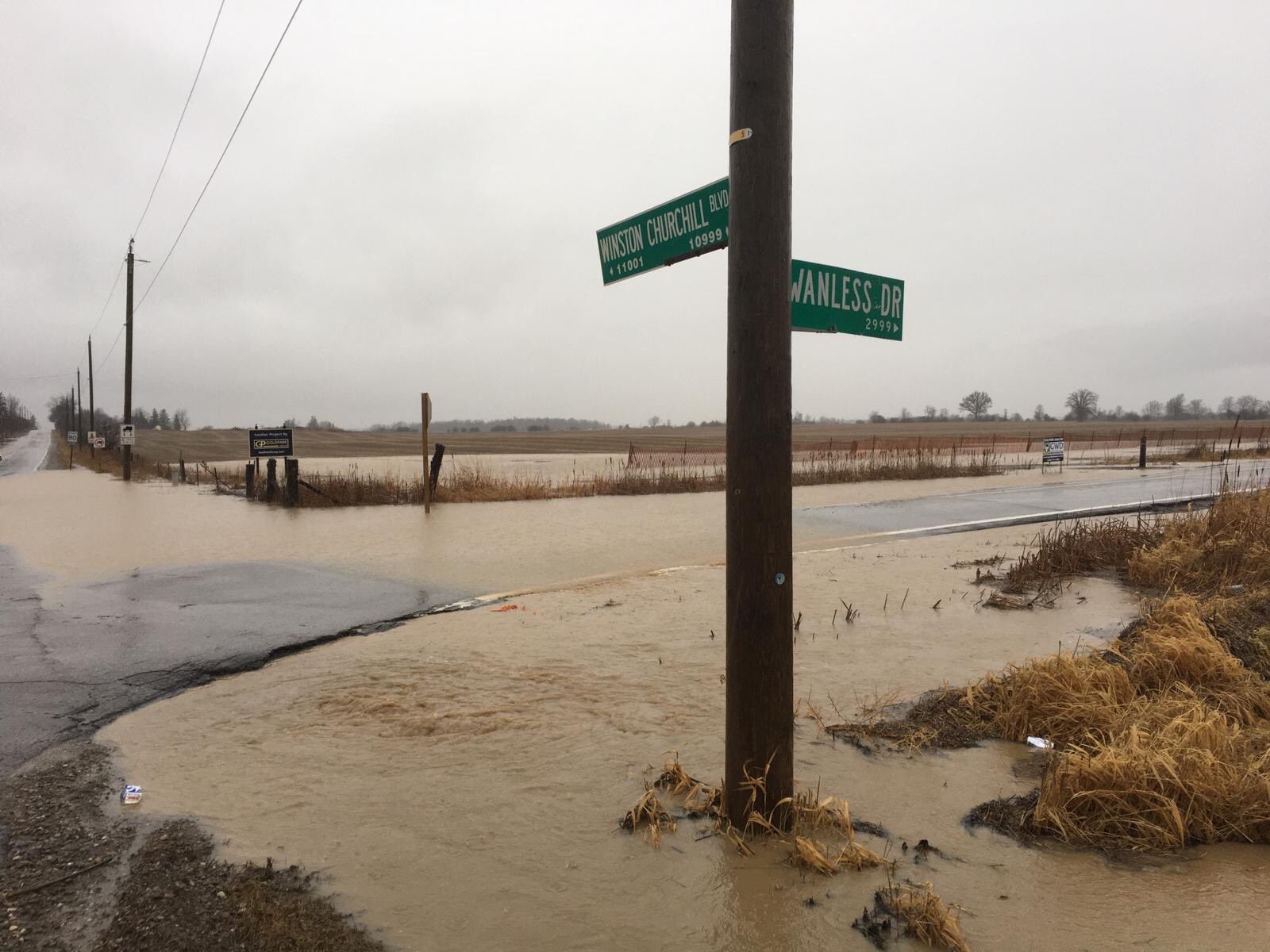 The lack of progress comes at a time when cities across the globe are facing increasing threats from climate change. The United Nations Intergovernmental Panel on Climate Change (IPCC) has said the disastrous effects of climate change are much closer than previously anticipated. A 2019 report explicitly called on municipalities to do their part to address two key areas of concern; land use and vehicle pollution. These are two key areas of concern for Brampton, its Community Energy and Emissions Reduction Plan (CEERP) states transportation and the residential sector account for 60 and 21 percent of city greenhouse gas emissions respectively. The City of Brampton declared a “climate emergency” in 2019, but the report shows that little has changed since that time.

“It’s a little concerning,” LJ Prabaharan said of Brampton’s updated plan. He’s a member of the Community Climate Council, a not-for-profit organization that advocates for climate action in Peel Region.

The EMP is divided into six sections (People, Land, Air, Water, Energy and Waste) and the update examines how residents and the City responded to each section. Only three of the 20 targets outlined in the original EMP, transit trips and natural heritage system (NHS) restoration for the community and City, are on target. 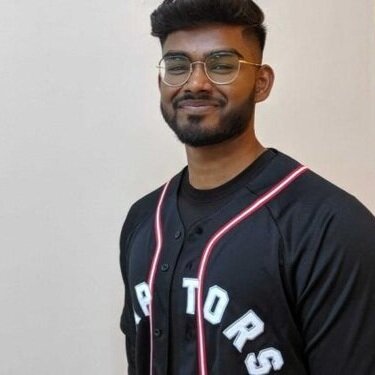 A closer look at the missed targets highlights not only a City that has failed to prioritize environmental sustainability and climate change, but a flawed plan for addressing these critical issues.

Five of the EMP’s key goals are “progressing toward target”, including building energy use, waste diversion, and community density. However, these small victories are eclipsed by the goals that are either off target, did not have any initial target set in 2014, or a lack of data avialable, making it difficult to measure any kind of success. 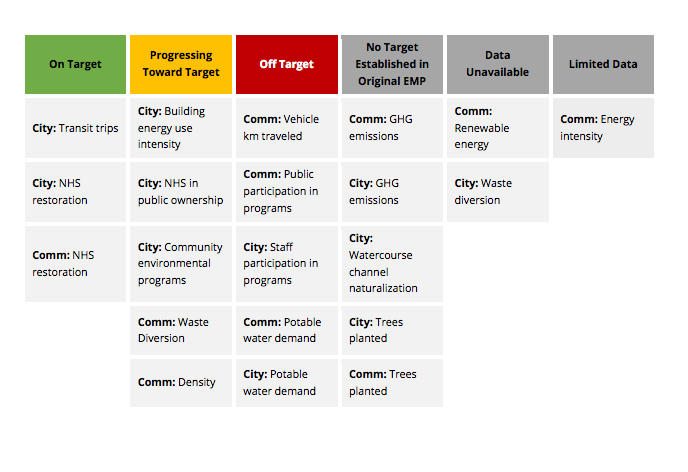 The key goals of the City's Grow Green Master Plan

A key contributor to the lack of success over the last five years could be the lack of buy-in to the programs, both from the community and City employees. The report shows that participation has dropped off across the board.

Success of the EMP, and any environmental sustainability plan, leans heavily on public participation. This means responsibility falls on the municipality to effectively engage its residents to take part in programming. This can come as a result of either winning the hearts and minds of residents, convincing them of the benefits of reducing their footprint, or through small incentives that encourage participation. 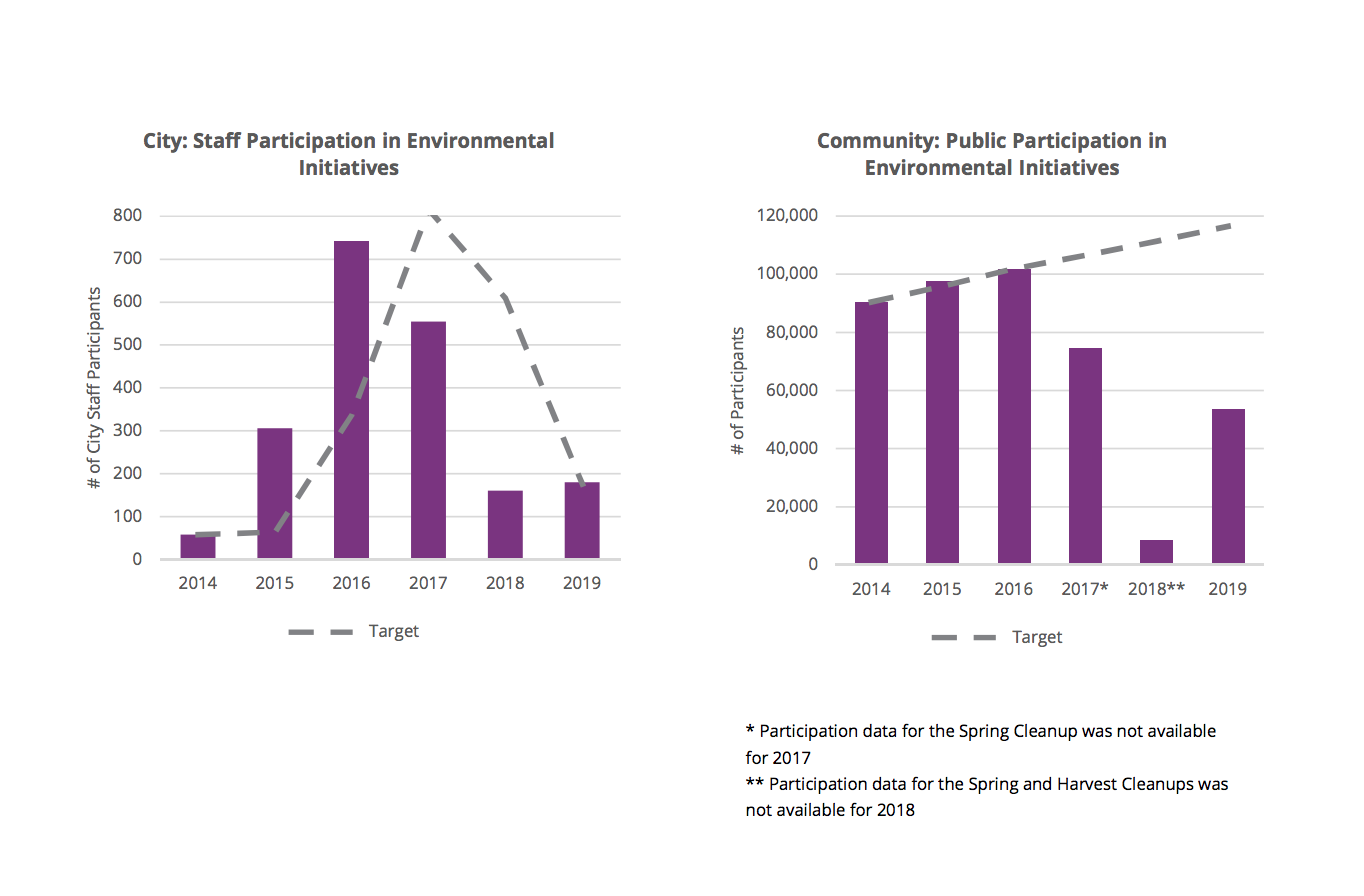 Available data from the City shows that participation in environmental programming by both City staff and the general public decreased between 2014 and 2019.

The City’s metrics show its efforts to date have been ineffective, outlining how participation of City staff and residents dropped off between 2014 and 2019.

The drop in participation is blamed on the ending of two City programs: Brampton Clean City and the Smart Commute Brampton-Caledon initiative. There’s no explanation why these programs led to a significant reduction in participation observed over a number of years and why no subsequent programs addressed the gap.

When asked about the decrease in public participation, the City contradicted its own document, telling The Pointer: “Participation in our environmental programs is growing,” despite data in the report indicating the opposite.

Staff participation was the only problem council addressed during the March 10 Committee of Council meeting. Regional Councillor Rowena Santos suggested incentives be created for staff to increase participation. She cited the example of Google incentivizing employees for leaving their cars at home in favor of taking the bus or biking to work and wants similar discussions to take place for the municipality.

The conversation didn't expand beyond this and no other elements were discussed. Prabaharan was surprised to see this.

“Aside from the written report, no one at town council actually brought up the fact that they're missing these targets [especially] vehicle kilometers traveled. That's huge. That's a leading source of your GHG emissions right there. The fact that that wasn't spoken about is concerning to me.”

The update shows that greenhouse gas (GHG) emissions in the city has been “trending in the wrong direction.” The main culprit is the City’s “fleet”, which includes all City vehicles, and road maintenance equipment. The report is unclear whether this also includes Brampton Transit buses. In an effort to mitigate this increase, the City is development a Sustainable Fleet Strategy.

“As the population of Brampton grows, service requirements increase, and this in turn increases the size, requirements, and pressures put on the City’s fleet for the provision of services, as well as the GHG emissions produced from a growing fleet,” a spokesperson states. “(A) Sustainable Fleet Strategy will, among other things, identify opportunities and approaches to improve fuel efficiency and reduce GHG emissions of our fleet.”

Between 2010 and 2016, the City of Brampton noted that improvement was needed to address rising GHG emissions. It remains unclear how the city has faired between 2016 and 2021.

The goal is to complete the strategy by the end of 2021. A spokesperson previously told The Pointer in February 2020 that the fleet strategy would be completed by the end of last year.

There are no details explaining where the City currently stands with its efforts to reduce GHG emissions. Despite labeling it a problem, the document only outlines baseline metrics and targets. Details aren’t provided on where the levels of community GHG emissions stand either. Targets are informed by the Community Energy and Emissions Reduction Plan, the EMP states, but that document doesn’t have details outlining where the municipality is in its goal to reduce GHG emissions by 80 percent from 2016 levels by 2050.

One of the biggest contributors of GHG emissions is passenger vehicles, a key issue for a car-centric city like Brampton. The EMP set out to change this by trying to get residents to spend less time in personal vehicles.

This was not achieved. In fact, vehicle kilometres travelled in Brampton increased between 2010 and 2018, and is well above the City’s target. Data is not available in the report for 2019 or 2020.

This is a “tough pill to swallow” Prabaharan said.

The plan explains that new targets need to be established in the updated Transportation Master Plan (TMP). Originally published in 2015, it shows 90 percent of the trips taken in the evening were in a personal vehicle, further illustrating Brampton’s long reliance on passenger vehicles.

“The updated EMP emphasizes the need to create more complete communities, foster local economic development, and invest in multimodal transportation options,” a City spokesperson told The Pointer when asked about the increasing reliance on vehicles in the city.

The availability and usage of potable water demand is another problem outlined in the refreshed plan, and is a “huge red flag,” Prabaharan said.

The updated EMP outlines both the City and community are off target for water usage, but the City did worse out of the two with annual water usage increasing between 2010 and 2018. The City notes “water efficiency strategies” and reduction targets need to be developed.

Community numbers are also off. The original EMP outlined residential use of water in 2010 was 225 liters per capita per day. In 2018, use decreased to 200 litres per day. The goal for 2020 was 174 litres per day. Details for that year are not included in the report and it’s unclear where the community stands.

“The Community per capita water use has declined, but not at a rate that would achieve the long term target,” the report states. The numbers are set by the Region of Peel’s Water Efficiency Strategy, as the region controls water usage in the city. No updated numbers from the Region were available.

Prabaharan believes these numbers speak volumes to the infrastructure being used and highlights the importance of retrofitting to reduce water usage. “Reducing water usage is honestly a lot easier than people think.” One of the easiest things is to change conventional toilets to water conserving toilets. Conventional toilets can use up to seven gallons for each flush, and some water conserving toilets use as little as 0.8 gallons of water per flush, he said.

He believes there’s great benefit in public knowledge and the City and Region could offer incentives to people to retrofit their homes. “Money talks,” he said. The Region of Peel used to offer a rebate for “high-efficiency” toilets but the program ended in 2013. Water saving toilets being “easily accessible and inexpensive” played a role in this, according to the region’s website.

The City notes it has made effort in this regard, including instaling “water efficient technologies” in both new and older buildings, piloted greywater reuse approaches on City facilities and established green roofs on City buildings.

The end of the updated report outlines a number of new goals. Cross-referencing them with targets from the original plan showing a number of initiatives first suggested six years ago were never completed. For example, the original plan asks for water conservation techniques for City buildings to be made available three years after the plan was first published. This never happened. The updated plan outlines a similar goal, stating a “water efficiently strategy” should be developed for city buildings.