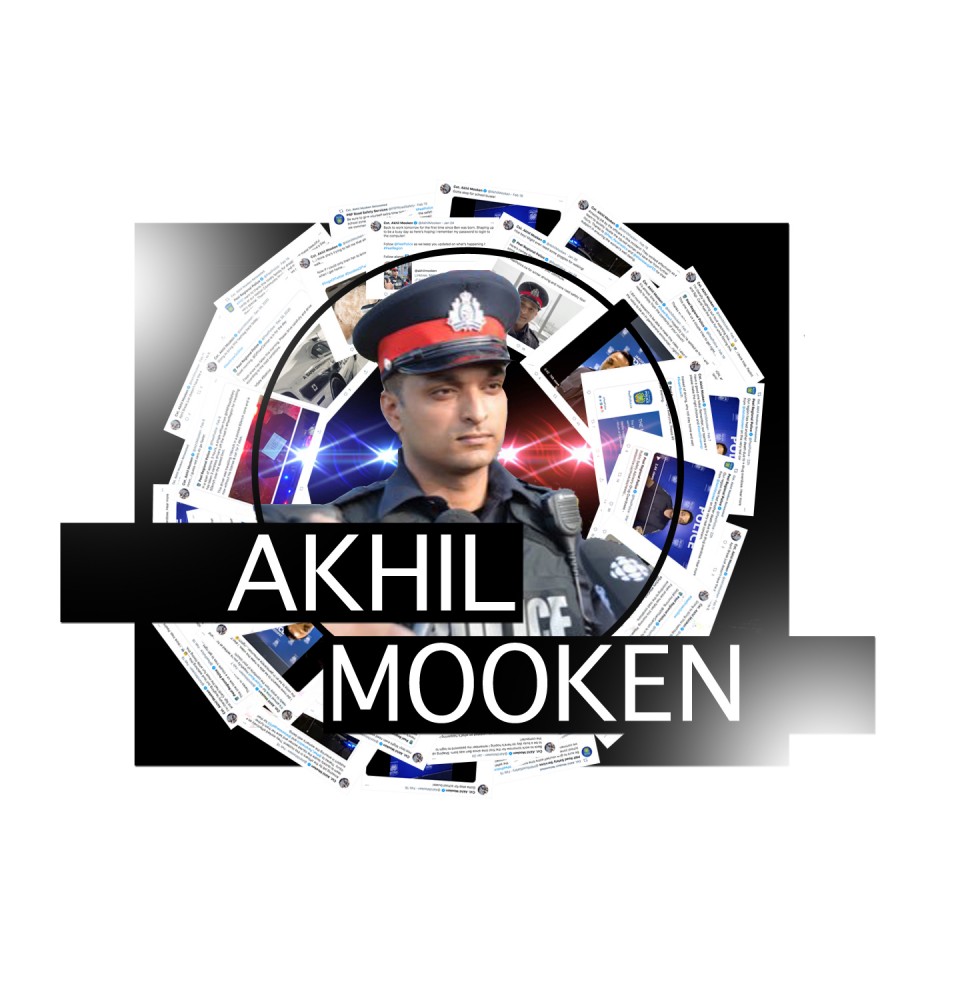 Constable Akhil Mooken is a fixture on news programming in Peel, reporting on crimes that occur in Brampton and Mississauga. The Peel Regional Police public relations officer is a spokesperson for the force and can often be seen, straight faced and in uniform, speaking to the media about grim details relating to crimes in two of Canada’s largest cities.

For those who only know Mooken through social media, the more dramatic aspects of his job might come as a surprise. 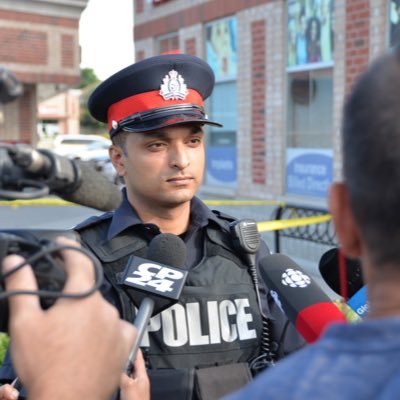 His Twitter page features conversational topics and tools for community members to engage with in unique ways to build bridges. A poll asks if a contentious pizza topping belongs on the Italian dish. Another quizzes users on what the best type of Timbit is, with only one answer [Mooken’s favourite] to choose. Conversational topics aren’t just confined to food, but they’re almost always fun and lighthearted.

“When people think of the police on social media, they think it’s always straight face [and that] we’re always serious all the time,” Mooken told The Pointer. “We’re human as well.” His social media presence has become a reflection of a force that is responding to its community. Calls to diversify and engage with the range of voices across Brampton and Mississauga are part of the culture Mooken and new Chief Nishan Duraiappah have embraced. “We have a sense of humour, we have families, we have opinions.”

Mooken started his Twitter page, his most popular social media account, in 2015 when he worked as a school resource officer, to help him engage with students and other members of the community, a practice he continues in his current role.

He doesn’t believe people need to be serious all the time, especially when dealing with police on community building initiatives and hopes his commentary-focused posts break barriers, showing residents they can communicate with a police officer the way they would with a neighbour. “[It’s to] humanize us as officers, to humanize us as people outside of uniform.”

People like to see lighthearted content and he uses humour in his posts whenever he can. Many of his recent missives revolve around his three-year-old daughter and the things she does that make him laugh. “If there’s one thing the whole world needs right now, it’s more laughter and if I can help make people laugh, I’m going to take that opportunity.” 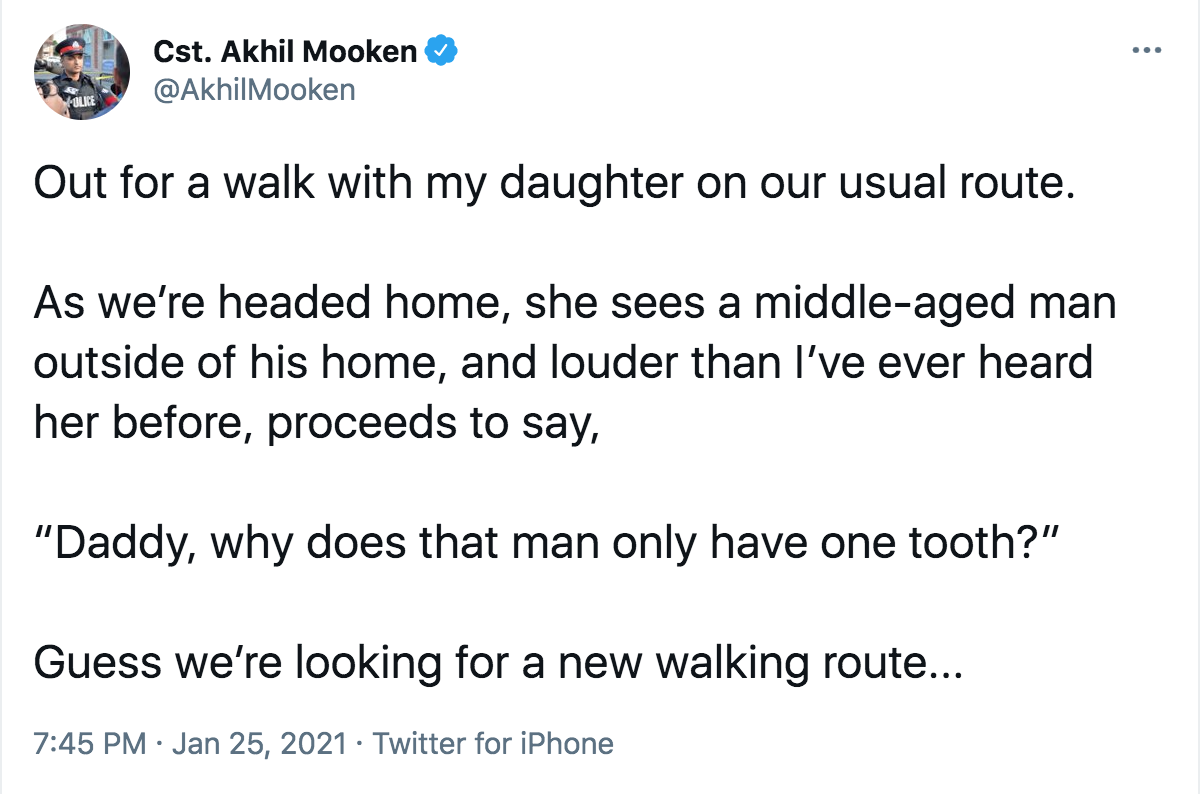 His expanded social media following is an indication of success. In the past month, more than 65 people have followed him on Twitter, an account with more than 4,000 followers.

A majority of the posts Mooken shares on his personal pages aren’t police related at all, but focus on his family, current events, or things he experiences in his day-to-day life. One of his most recent posts detailed the difficulties his newborn son faced, after having surgery at SickKids Hospital earlier in the year.

Mooken describes receiving numerous messages from kind-hearted followers asking about his son’s health. This not only made him and his family appreciative, but it illustrated the sense of community Mooken was trying to create, where people are comfortable talking to him about his family and his personal life. He calls his followers a second family.

Social media, in a unique way, has helped recreate the neighbourhood police beat, when officers walked the streets, stopping to talk with all the residents and business owners who made up the local community that officers were a key part of.

But in today’s troubled times, not everyone views a friendly police officer as safe and approachable, a reality Mooken acknowledges.

His more human approach to social media avoids the controversial issues and long-standing tension between some in the two cities and the police members who serve them. Mooken wants to cut through that, to reach the place everyone wants to be in.

“I don't post much in regards to ongoing current events involving the police. Certainly, there are some of course, but nothing with the focus of trying to alleviate any community tension.”

He said “there’s certainly a place” for those types of posts that address the ongoing controversies in policing. But he has to be mindful of his role as a public relations officer because many of the current events sweeping across North America, including calls for major police reform to address systemic discrimination, can negatively impact the relationships with the police service. “I have to be mindful of which account I post from, what I can say, because there are certainly other implications.” He said no one has reached out to him directly to voice displeasure or concerns they have with Peel Police.

Referencing the death of George Floyd in Minneapolis last year, he said nobody would say his death wasn’t a criminal offence, but it’s an incredibly sensitive topic for police.

Posting anything through his own social accounts is not part of Mooken’s job description, but he sees it as an opportunity to engage with members of the community without some of the loaded tension often expressed through social media. It allows him to be seen first as a fellow resident, not just as someone in uniform who represents whatever police culture means to each individual. Handling his own Facebook, Twitter, Instagram and TiKTok accounts, he spends a couple hours every week posting content to engage with the community consistently.

The few police-related posts that Mooken does make revolve around rules and community safety. He recently took to TiKTok to share a video about fines drivers can face if they don’t stop for a school bus with flashing lights.

A lot of the topics people reach out to him about involve crime in the community, how to become a police officer, and school projects. A couple of months ago, Mooken took to TiKTok to host a question and answer session about job opportunities and issues relating to the community. His focus is to continue with these engagement-oriented posts and even start experimenting with live streaming question and answer sessions.

“It is a fantastic tool for us to engage in. Live [streams] are certainly a lot more interactive in real time than something where people post a comment and I respond to, especially on TiKTok. Lives on any of our platforms are more engaging and we are certainly trying to do more.”

TiKTok is a fairly new social media platform for police, and unlike Twitter, Facebook and Instagram, not everyone who engages with the public has an account. Given the app is so popular with people from a variety of backgrounds and ages, especially youth, Mooken saw this as an opportunity to stay connected with the community. “It's missed opportunities if we don't jump onto these platforms.” 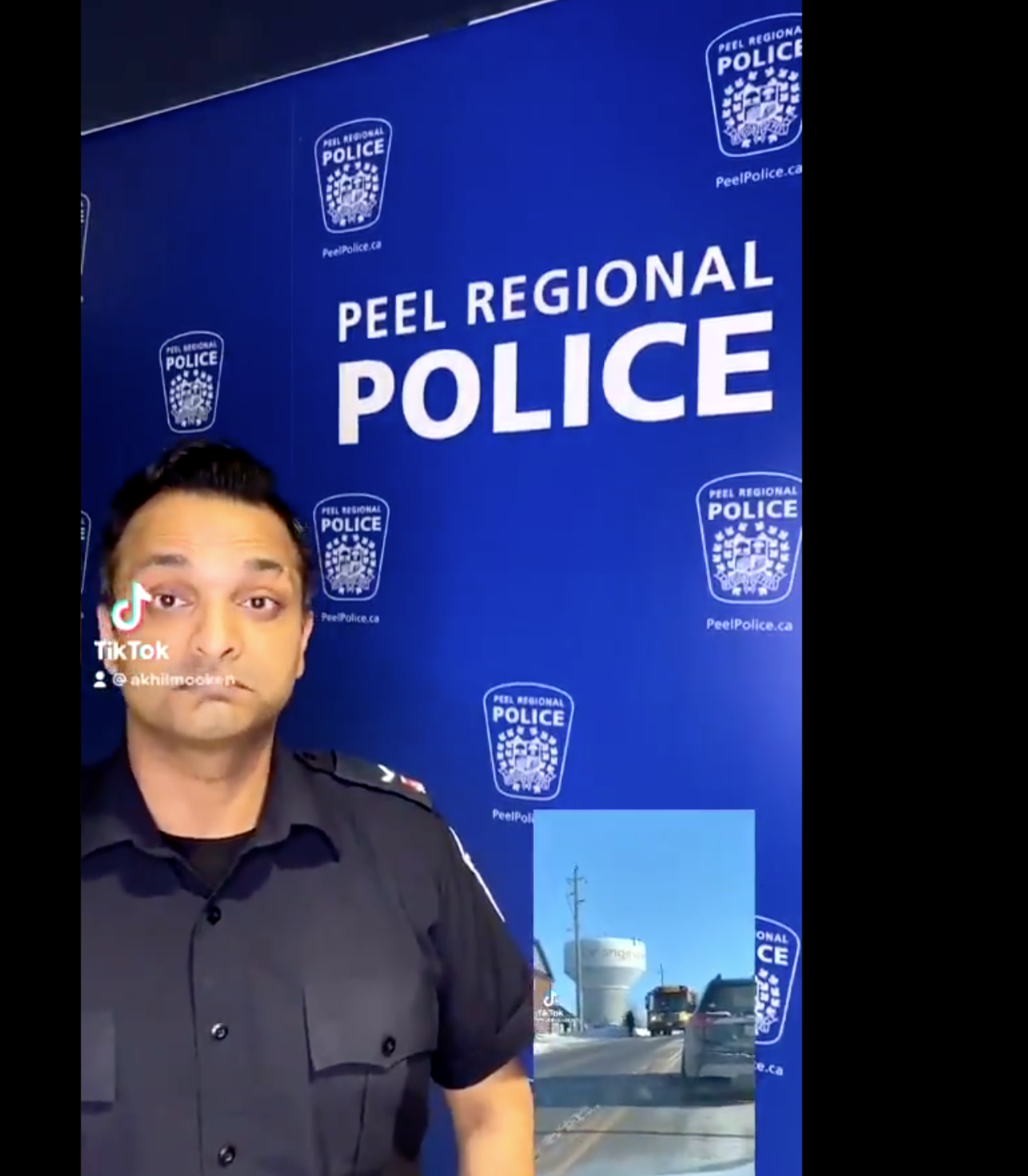 Cst. Mooken has taken to TikTok in an effort to connect with youth in Peel.

The engagement received through his accounts, the accounts of other media officers, or from the official PRP pages, can drive campaigns Peel Police create. Mooken said if repeated questions about a specific topic are seen, answers are highlighted through many platforms, such as video, whenever possible.

Social media is a powerful tool, Mooken said, and he has plans to continue expanding this evolving community beat.