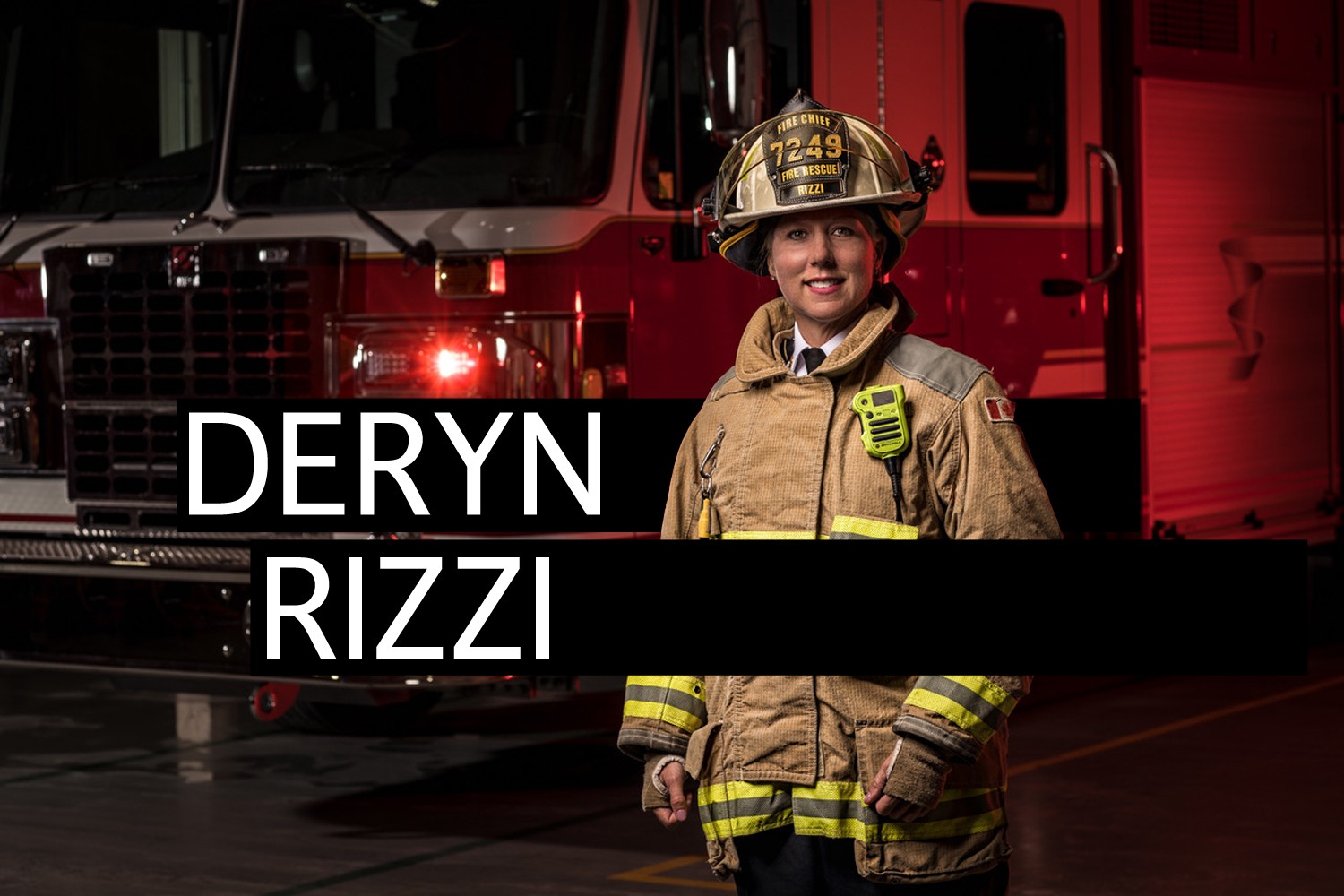 She has two undergraduate degrees from Queen’s University: one in geography, another in education. She has also completed a masters in disaster and emergency management at York University, where she is currently completing a Ph.D. looking at workplace culture, labour relations, policies and power dynamics with regards to women in non-traditional work. Throw in several certificates — municipal leadership, employment negotiations, (a masters certificate) in public administration — and Rizzi is a leader whose experience is backed by reams of academic knowledge.

Just one month ago, she arrived in Mississauga, leaving her role as the head of Vaughan’s fire service. She’s been thrown into the deep end, dealing with decrepit fire stations, slow response times and a global pandemic. 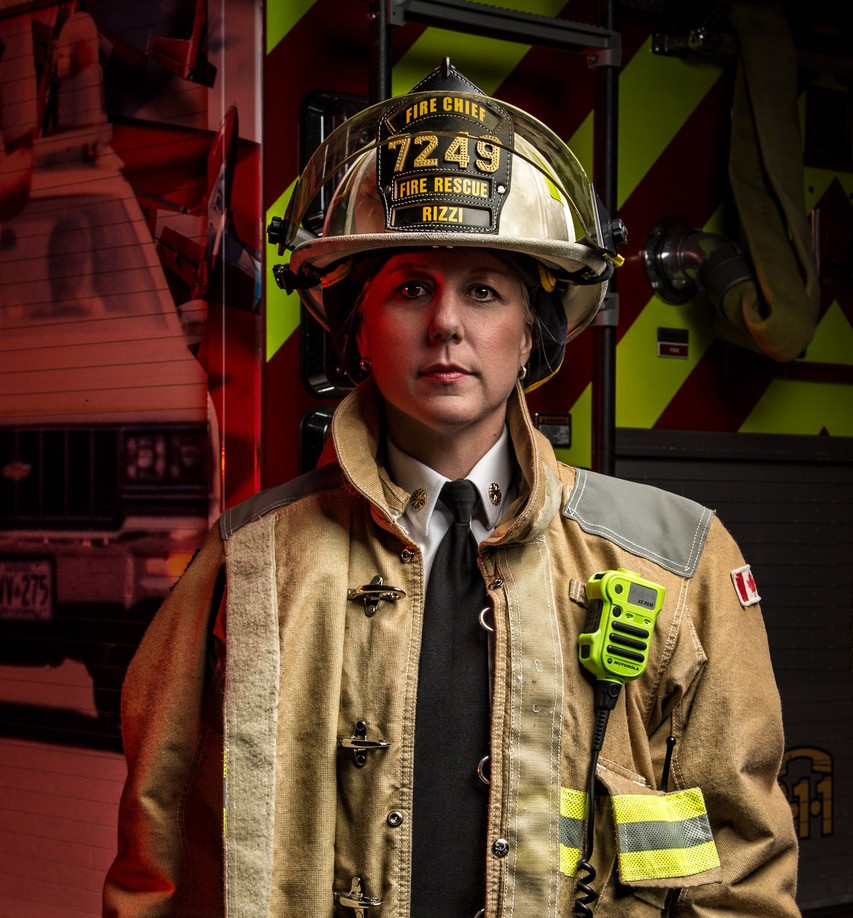 It’s too early to draw conclusions on how the new chief will right the ship; she is in the middle of a flurry of inductions and introductory meetings. One thing is clear early on: Rizzi is an adept and progressive communicator.

“I live and breathe the fire service and so I feel like I have a lot to share,” Rizzi told The Pointer.

With the omnipresence of Facebook, Twitter, Instagram, TikTok and Snapchat, the way leaders in all spheres communicate with the public is changing. Leaflet drops and robocalls are beginning to look prehistoric, while COVID-19 makes door-to-door engagement and town hall meetings significantly harder.

For the Mississauga Fire and Emergency Service, this is a challenge. Years of underinvestment have damaged response times, meaning trucks arrive at the scene of a fire, on average, significantly later than they should. Part of Mississauga’s plan to bridge this gap is education — teaching residents how to avoid fires in the first place. 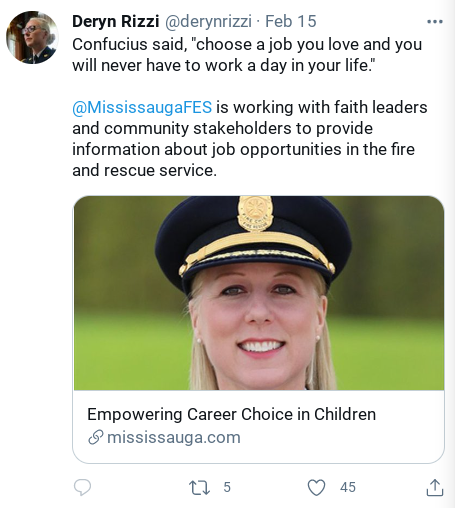 Rizzi is proving to be a competent communicator using social and traditional media.

According to the 2021 budget, Mississauga’s fire service is more than two minutes behind the provincial target for travel time and more than a minute behind the total target. The budget document, which Rizzi was not in place to influence, places significant emphasis on education as a key to closing this gap. If the fire service responds to fewer fires, it can arrive faster with more resources available.

On this front, Rizzi has demonstrated significant digital literacy through her Twitter account. She has successfully commandeered social media to deliver fire safety tips to the public.

A desire for fire prevention advice is rarely a reason someone creates a Twitter account, so crafting a message that resonates is critical. Rizzi is aware of this and has found several creative ways to make her messages standout online.

On February 18, she shared a short video clip, accompanied by a startling fact: heating equipment is the third leading cause of home fires in Ontario. The extract from an interview was shared to coincide with Mississauga’s cold snap when many were breaking out their space heaters. The use of a video to liven up an education issue and a startling fact to grab attention worked, with at least 1,600 views. 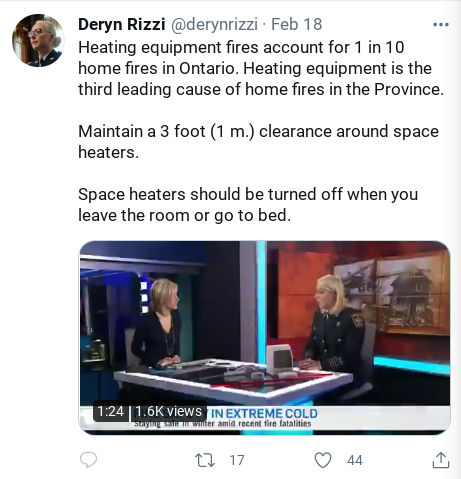 Rizzi tweeted an interview she took part in when she worked in Vaughan to remind residents of the danger of leaving heaters unattended.

In December 2020, when she was still working as fire chief in Vaughan, Rizzi shared a video on her timeline offering tips to safely celebrate the Jewish holiday of Hanukkah. In one of two posts by the fire chief relating to the holiday, a firefighter and rabbi offered advice to safely celebrate with the Menorah, a nine-branched candelabrum lit across the celebration.

The cultural competency displayed in these tweets is an asset in Peel Region, where diversity abounds. Understanding various cultural celebrations throughout the year, their significance and how to remind residents to celebrate safely can help the fire service to connect with different communities. 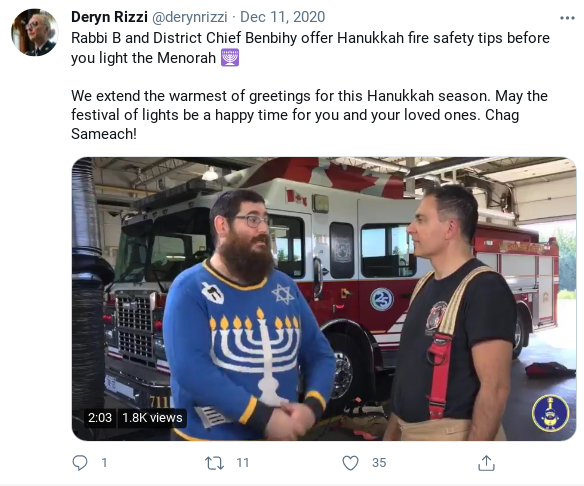 Cultural competency is a vital skill for leadership in Mississauga

In another example from her time in Vaughan, Rizzi and her colleagues convinced Toronto Maple Leafs star Mitch Marner, who grew up in nearby Thornhill, to create a video with fire safety advice. The clip was shared by Rizzi during Fire Prevention week, a time when most cities and fire services are sharing reminders about the importance of smoke detectors and other tips. The decision to enlist the help of a celebrity, with particular youth appeal, set the message apart from some of the more traditional posts being shared online.

Rizzi, who posts to her account herself, says her use of social media doesn’t begin and end with education. Residents can fall into the trap of thinking firefighters only deal with burning buildings and forget the rest of their roles. For the chief to cultivate public buy-in, it is important to highlight what the City’s most expensive department does behind the scenes.

“I think perhaps the public doesn’t realize how much time, energy, personnel [and] resources goes into maintaining their skill sets,” Rizzi said. “And then it’s also important, because the title firefighter, people think our folks just focus on fire and I really try to stress it’s an all hazards team.” 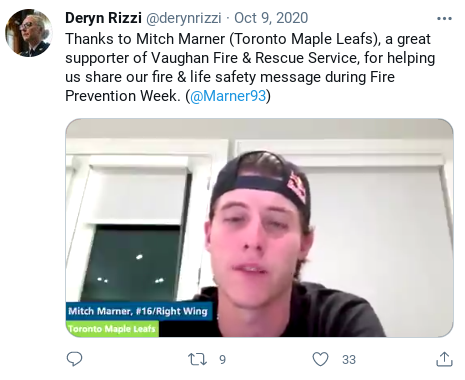 Asking celebrities to deliver messages can help bring the words to life and increase engagement from the public.

Recently, Rizzi posted several images and videos of her team training for ice rescues. As residents along Mississauga’s waterfront took to the ice to play shinny and try out their skates, the messaging offered an important reminder of the dangers of skating on lake or river ice.

“Through social media we can create a visual image of our department and how it serves the community,” Rizzi said. “It shows our firefighters are busy all day – every single day. I can’t take for granted that the public knows what we do or what it takes to serve the community; social media is a great way to continuously remind our citizens of our daily value in their lives and the fire and life safety risks we as a fire service team are working to minimize.” 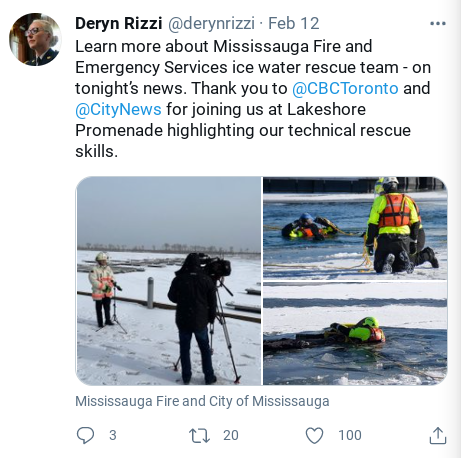 The demands on Rizzi’s social media are different to those of a politician. Where an elected official has a duty to communicate with residents and make themselves available to represent the views of those who put them in office, a senior bureaucrat is answerable to the public in a less direct way. If she wanted to, the chief could broadcast without engaging, but Rizzi has found herself dealing with the good, bad and ugly of social media communication.

When she worked as a deputy chief in Vaughan, she appeared on a CTV National show discussing fires in potted plants on balconies. Despite the dry material, the segment was a success and Rizzi found herself back on air discussing dryer fires. Once again, the clip flew.

This time, Rizzi dipped a toe into the abyss of Facebook comment sections, finding praise and appreciation for her work sitting alongside sexist comments about her role. The experience taught her engagement is important, but only at certain times. Some things are not worth responding to.

“I don’t engage, I never engage if I’m being criticized on social media,” she said. “You won’t see me engaging because you’ll never win.”

On another occasion, after giving the keynote address at Miss Universe Canada when it was in Vaughan, Rizzi received a critical comment from a father. His words focused on his own daughter, a paramedic. Rather than simply ignore the comment, or engage in a fire fight online, she messaged the man.

“I explained all my rationale about supporting women in everything they do and gave some examples of what some of these women who were competing, some of their career highlights,” Rizzi said. “He messaged me back, he said ‘I never looked at it that way, I’ll remove my message.’ And I didn’t ask him to remove the message.”

As a woman in a public position, Drizzi has also found herself with an additional responsibility. Within her profession, she says she is just another fire chief, but her online presence offers another side. There is an opportunity to inspire.

“When I realized, oh my goodness, really young girls are also watching this, you start thinking about what exactly am I showing them,” she said. “It’s important to me — these young girls are looking at social media, it can’t be a filtered reality, you can’t make your life look so great.”

Rizzi’s birthday post reflects this. Instead of putting a glossy filter on the passing of time, she shared her frank experience. 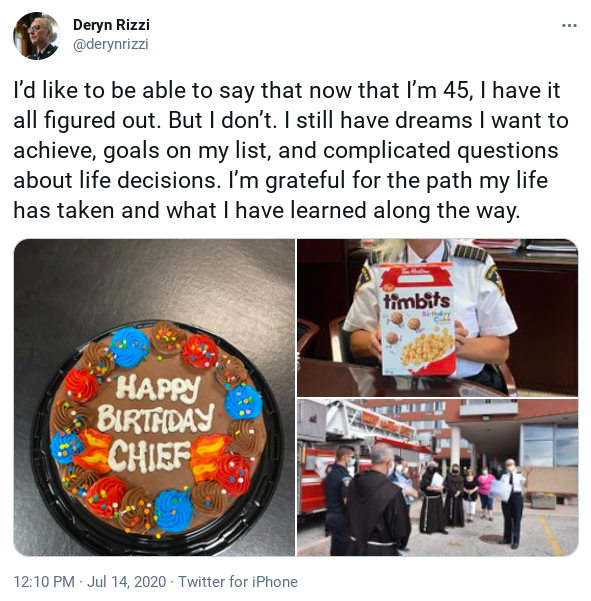 On her 45th birthday, Rizzi shared a frank appraisal of how she was feeling.

There are other examples of clever social media use: sharing callouts for teachers to invite firefighters to educate their classes and posting about major fires to raise awareness, to name two.

But Rizzi is careful to make it clear that her social media is not the be-all and end-all of her role. If it goes well: great; if it doesn’t: she’s a fire chief, not an influencer.

“My impact as a fire chief will be measured on the difference I made in the lives of my firefighters, the leaders I developed, the fire and life-safety of the city I serve, and on the extent to which I leave Mississauga Fire and Emergency Services a better organization than my first day.”