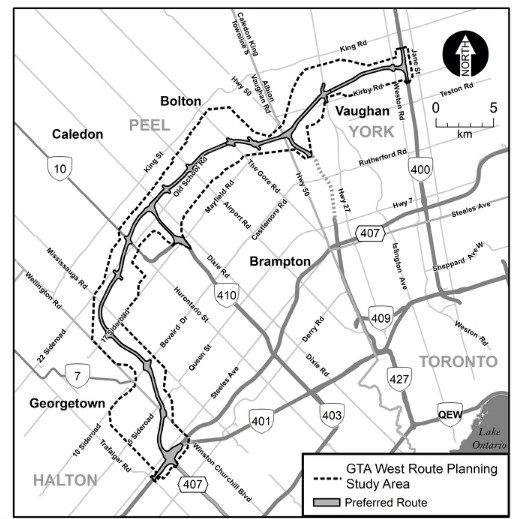 Photos from The Pointer files/Government of Ontario

Opposition to the controversial GTA West Highway pushed by the PCs is building with several municipalities joining the growing movement to have the federal government quash a plan that would be devastating to the environment and local ecosystems.

Today, in a surprising move, Ontario’s PC majority government said it is not committed to building the multi-billion-dollar highway that would run mostly along, and partly through, the southern edge of the Greenbelt, the world’s largest protected green space.

Ontario Green Party Leader Mike Schreiner, who has been a vocal advocate against the project for months, stood up at Queen’s Park Monday and implored the PC government to consider the destructive potential of the project.

“People do not want to see 2,000 acres of prime farmland and 400 acres of the Greenbelt paved over so that commuters can save only 30 seconds,” he said, referencing an independent panel commissioned by the former Liberal government that concluded the proposed congestion benefits of the project — frequently touted by the PCs — would be next to nil. “They don’t want to supercharge 1950’s style sprawl at a time when we need farmland to grow food and jobs and we need green space to protect us from flooding,” Schreiner said.

In response, Government House Leader Paul Calandra emphasized the project is still in the early stages, and if the results of consultations show the highway is not a good idea, it will be quashed. Ontario Green Party Leader Mike Schreiner during a visit this past summer to the area that could be impacted by the GTA West Corridor.

“There is still a tremendous amount of work that needs to be done here, some consultations of course that have to happen with our partners in the area and (the) environmental assessment,” he said. “Once we accomplish all of the consultations, if it makes sense for the highway to proceed, it will, if it doesn’t, we won't.”

The statement is a stark contrast from those offered in previous PC government press releases and statements from ministers who have touted the significant “benefits” the proposed highway would bring. Just last week, Transportation Minister Caroline Mulroney spoke at the Ontario Good Roads Association conference, emphasizing that Ontario’s transportation plans are pushing ahead, despite the pandemic.

“We are listening to the people of York, Peel and Halton Region on their transportation needs,” she said. “That’s why we continue to advance planning for the GTA West project, a 400-series highway which will include both highway and transit infrastructure. This project alone will create thousands of jobs and generate up to $350-million in real GDP during construction.”

Now, the tone has suddenly changed, after widespread backlash from environmental groups, municipalities and the public.

While Calandra suggested the PC government has not made up its mind on the project, the Province’s GTA West website makes it appear as if the benefits of the project have already been accepted as policy. The website’s FAQ section notes the highway would deliver: greater connectivity between urban growth centres, enhanced people and goods movement, improved commuting, and greater economic vitality.

The website includes a long list of other potential benefits of the project. It’s not clear which studies the Province is relying on to claim these benefits.

Also contradicting Calandra’s shifting stance, the GTA West website states that the Province has already come to the conclusion that a highway is needed in the area.

A screengrab from the Province's GTA West website which explains why a highway is needed in the area.

Mulroney’s statements came before Mississauga renounced the highway outright last week and the councils of all three Peel municipalities passed motions requesting the federal government step in to conduct its own environmental impact assessment of the project.

They followed a recommendation sent to Ottawa by Environmental Defence and Ecojustice, who asked the federal government to intervene.

The change in direction from PC officials signals the strong opposition surrounding the project is having an effect.

Several Mississauga councillors took an aggressive stance against the project, claiming it was nothing but a gift for the development industry. The highway, if completed, would open up large swaths of land for development, much of which was snatched up by builders years ago in anticipation of the corridor’s construction.

“You can just see the vultures waiting to build completely along that belt rather than compact developments, which is what we should be looking for — complete communities,” said Councillor Carolyn Parrish, who moved the motion to oppose the highway last week.

Her colleague, George Carlson, was even more candid. “We’ve been subject to these gravel guerrillas now for at least 50 years, trying to build more highways, more urban sprawl,” he said at Wednesday’s council meeting.

“I can almost hear the old scotch and soda tinkling as the decision was made to add another highway and let the developers build more stuff north of Toronto. They haven’t even finished doing infill in Toronto.”

The move by Mississauga Council to pass a resolution denouncing the highway followed months of advocacy by groups like Environmental Defence, Ecojustice and other environmental advocates.

The approved route for the GTA West Highway would see the corridor running west from Vaughan through Caledon, then arcing south-west, and then down through the west side of Brampton on its way toward the 401/407 between Mississauga and Milton.

The potential for environmental degradation can not be understated.

Report cards prepared by the local conservation authorities on the health of local watersheds show a clear trend. The northern, less developed areas of Peel Region have better preserved watersheds, more forest cover and healthier habitats. However, as you travel south, those ratings decrease as urbanization degrades water, forest and habitat quality.

If a highway is driven through those healthy green northern reaches, including the headwaters that feed the entire western part of the GTA, reducing those ratings, it will trigger a reduction in health across the board, especially in water quality as streams, creeks and rivers flow north to south. In essence, the GTA West Corridor could trigger a sweeping domino effect of environmental damage from the Greenbelt all the way to Lake Ontario.

The potential pollution of the region’s waterways is not the only side effect of running this giant runway of pavement through the area. If completed, the 413 Highway, as it is known, would bisect a north-south corridor that is well-used by wildlife to access the Greenbelt. It’s estimated that 78 of Ontario’s over 200 at-risk species live within the Greenbelt. With the new highway, these key parts of the intertwined local ecosystem would need to undertake a deadly road crossing to reach some of the last remaining pristine habitat in the area.