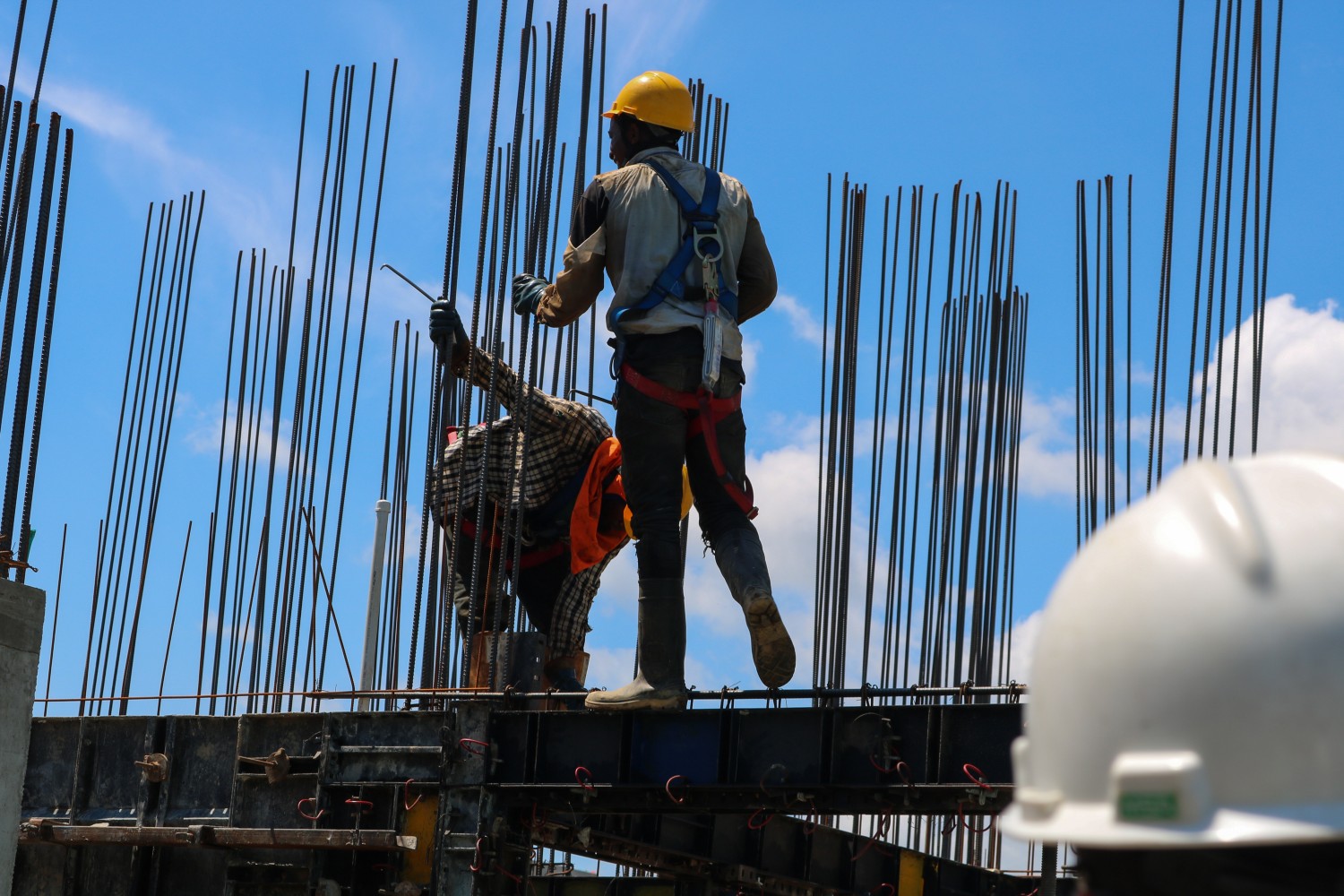 After 11 years in the trades – from scaffolding and metal work, to her current role in concrete forming – Mulisius Joe has also become skilled at navigating the male-dominated construction industry.

“I've worked with a few men who didn’t think I should be there,” she said, citing times when empty reasons were given to exclude her from contributing to a job. “It’s never said out loud but you could feel it…where you don't know if it’s racist or it’s sexist, but you know it's something.”

Calls for equity among construction labourers in the GTA were made decades ago, with African-Canadian carpenters and their allies protesting the exclusion of Black workers from trades unions and construction companies in the early ‘70s.

Trade union programs are now slowly helping to change that. Joe said she has seen a shift in how journeypersons, or mentors for trade apprentices, are increasingly focused on the treatment of women and visible minorities on site, and are better prepared to foster an equitable environment. 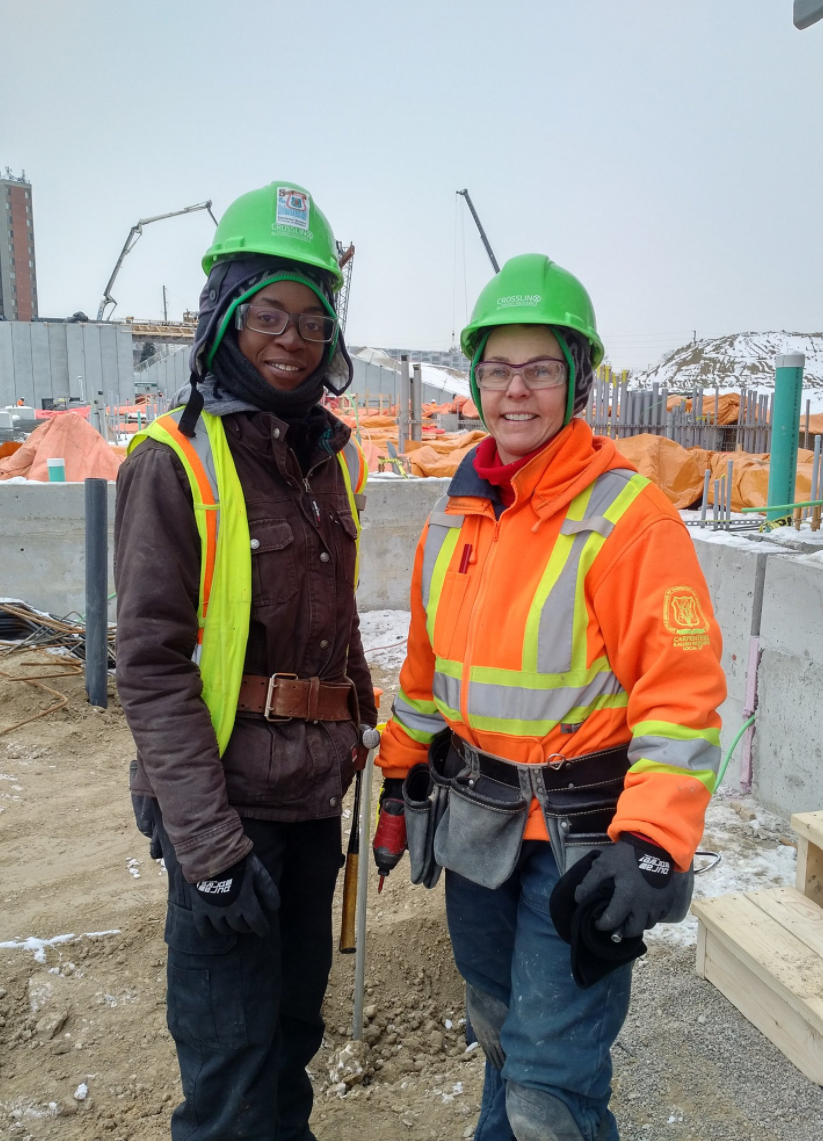 These changes make her hopeful the industry will develop a similar awareness around issues of discrimination and equity, especially after the racist incidents this past summer, when five nooses were found tied onto scaffolding or hanging in view at GTA construction sites. Despite police and union investigations – and the firing of at least one worker – another two nooses were found at Michael Garron Hospital in East York in late September.

“It didn't just go away because we said how we feel,” said Brampton resident Chris Campbell, of the Carpenters’ District Council of Ontario. In November, Campbell became the union’s first Equity and Diversity Representative. He will work to include racism in the scope of “toolbox talk” – trades-speak for frank discussions about safety issues – in an attempt to change the culture of silence around workplace discrimination in the construction industry.

The Carpenters’ District Council of Ontario represents more than 30,000 workers across 16 affiliated trades unions. Campbell completed his apprenticeship in the early ‘90s, and became a project supervisor at various sites across the GTA before teaching at the College of Carpenters and Allied Trades, based in Woodbridge.

An active member in the Jamaican Canadian Association and other Black community organizations, Campbell went on to become a Local 27 Toronto Carpenters’ Union rep prior to his current appointment. Following the police killing of George Floyd in Minneapolis last spring, Black Lives Matter demonstrations underscored the urgent need to confront anti-Black racism in the workplace. Campbell said he and other union representatives marched in the downtown Toronto protests in June, sporting the union flag. Mulisius joined the marches, and commended the union for making their presence visible.

“It feels good, because as a woman on site, and also as a Black person, I’m always the minority. To see our union jump behind this, it makes me feel so much prouder to be a Local 27 member,” she said.

But later that month, the first noose was found at the Eglinton Crosstown LRT job site. Campbell said one of the union’s members admitted to tying it and was fired, had his union membership revoked and was banned from working on projects operated by Crosslinx Transit Solutions.

“It’s not just a noose for some people. It’s a health issue, because they’re traumatized, they can’t mentally handle it,” Johnson said, adding that there were Black workers at the site. “Some people, they become emotional and they cannot go back to work because to them, it symbolizes an extreme aggression. To them, it symbolizes what their grandparents went through a few decades ago.”

According to 2016 Census data, close to one-fifth of Brampton’s workforce was in the trades, transport and equipment operations industry, compared to about 12 percent in Mississauga. Peel Region also has the highest proportion of immigrants compared to its bordering regions – at about 52 percent of the population – and the highest proportion of visible minorities, at 62 percent, compared to 51 percent in Toronto, and the GTA average of 48 percent.

The booming construction industry holds the potential to dramatically improve the employment prospects of Peel’s large visible minority communities. Many of these residents have not been well represented in the trades, traditionally.

The BOLT (Building Opportunities for Life Today) program was launched by construction giant Tridel in 2009, and in 2013 it was established as a charitable foundation aimed at introducing career opportunities to marginalized and other “under-resourced” youth across the GTA. It has provided more than 400 post-secondary scholarships for construction-related programs, in an effort to help young people from all backgrounds pursue a career in the trades.

Opening up one of Ontario’s largest industries to reflect the province’s population is a challenge the unions are now taking up as well.

Whether it’s because of cultural issues, for example the view among some South Asian-Canadian communities that trades jobs are not traditionally socially acceptable, or because of discriminatory dynamics within the industry, the lack of representation means many Peel residents are being cut off from highly lucrative careers.

In 2018, the average wage of workers in the construction industry across the country was almost $32 an hour, according to Statistics Canada. The average minimum wage in the country (which is what many newcomers earn) at the time sat at about $12 an hour.

A 2016 Peel-Halton Workforce Characteristics Report notes that women, racialized minorities and newcomers face disadvantages when holding precarious positions in Peel, with the largest proportions of people earning lower incomes located in Brampton and Mississauga compared to Halton municipalities. In the construction and industrial sectors, about 97 percent of Peel and Halton journeypersons and apprentices are male, though there is no race-based data provided or notes on discrimination trends in the workplace.

The recent rash of racist incidents raises questions about what the industry is doing to confront discrimination.

At the large LRT construction site where the Fairbank Station in Toronto, near Dufferin Street and Eglinton Avenue will open in 2022, Campbell said the union interviewed people on site and had a “toolbox talk” after a noose was tied there. The union has partnered with the Toronto and York Region Labour Council to create a charter document and establish standards for an inclusive workplace that rejects racism, xenophobia and discrimination. The document is now posted at some construction sites, Campbell said, adding that the union is planning to address racism in the workplace through new educational initiatives and training for members and senior leadership.

In his new role, Campbell will be notified and involved in the complaints resolution process related to racism in the workplace, and encourages workers to report these incidents. “It’s a health and safety issue,” he said.

With the work of craft and trade unions based in skill development, at the forefront of efforts to address racism, sexism and other forms of discrimination is the question of whose skills are being recognized, said Tania Das Gupta, a professor in the School of Gender, Sexuality and Women’s Studies at York University.

As part of her research into racism in the labour movement, Das Gupta interviewed visible minority workers in leadership roles within larger unions, who expressed feeling obstructed in their work.

“In other words, you could have diversity, but sometimes it becomes tokenism and the [union] structures are not conducive to inclusion,” she said.

Education is integral to making anti-racism programs a success, she added. “If the workers are prepared, and they’re educated on why these changes are happening, then they're likely not to feel threatened.”

Professional associations and developers such as Tridel and Ellis Don have launched anti-racism campaigns in response to the incidents this past summer, including quarterly roundtable discussions with 21 industry partners, spearheaded by the Residential Construction Council of Ontario (RESCON). The group is meeting for the second time this month.

“These incidents didn’t happen in isolation, and it wasn’t just one incident…so we realized that this is an issue that we need to dive deeper into combatting,” said Amina Dibe, manager of government and stakeholder relations at RESCON.

The collective launched the Construction Against Racism Everyone (CARE) Campaign, distributing more than 2,000 hardhat stickers for workers to show their solidarity, while launching educational webinars and subcommittees to tackle education, communication and training within the industry.