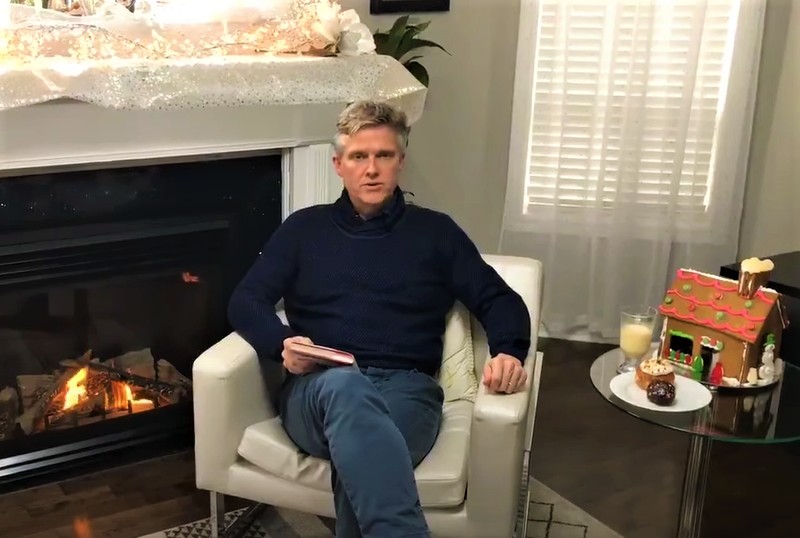 With Finance Minister Rod Phillips tendering his resignation Thursday after a tone-deaf holiday to the Caribbean that went against the spirit of every piece of guidance his government introduced since March, his social media posts are aging painfully.

In one tweet, on December 24, the glint of Twitter’s Christmas emoji, representing the North Star in the Nativity, almost visibly scoffs at hardworking Ontarians staying home.

In another, later the same day, he is sitting next to a fireplace with a table to the side topped with eggnog, treats and a gingerbread house. He says in the accompanying post, “Even as COVID-19 changes how we celebrate, we should reflect on what makes Christmas so special to us…” Another North Star emoji ends the tweet. 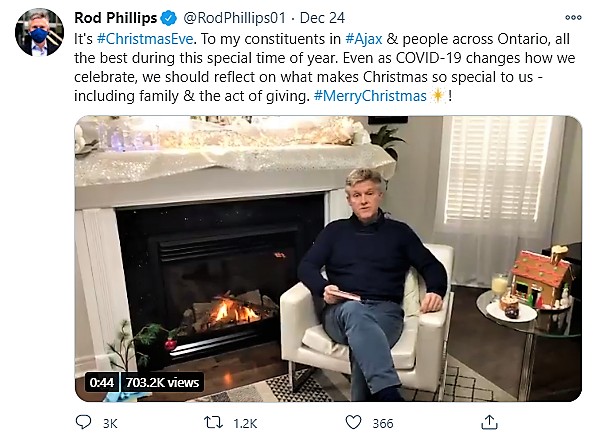 It's unlikely Rod Phillips imagined this pre-recorded video posted on Twitter Christmas Eve, while he was actually in the Caribbean, would eventually garner more than 700,000 views (for all the wrong reasons).

Posts throughout his two-and-a-half weeks on the exclusive Caribbean island of St. Barts where celebrities are known to play, created the impression that Phillips was still in Ontario.

He left on December 13 for a vacation, and on Thursday, upon his return after Premier Doug Ford demanded he get back immediately, resigned from his job as minister of finance.

Phillips will remain a caucus member and continue to serve as an Ajax MPP.

“At a time when the people of Ontario have sacrificed so much, today’s resignation is a demonstration that our government takes seriously our obligation to hold ourselves to a higher standard,” Ford said. He will be hoping the resignation brings to an end the public scrutiny that has stirred much anger around the province.

One of the elements of the story which has struck a particularly discordant note is the series of posts from Phillips’ Twitter account since he quietly left the country when the Ontario legislature shut down for its winter break. Various photo opportunities posted across several days (wearing the same outfit) gave the impression the MPP was perhaps clearing his driveway of snow in Ajax, not sitting under the warm sun in St. Barts.

In the days that followed his December 13 flight out of Canada, Phillips’ Twitter account tweeted or retweeted more than 80 times.

“Many politicians, I would almost say most politicians, pre-program and pre-record a lot of their social media content,” Phillips said, speaking at Pearson Airport Thursday morning upon his hasty return. “I did that to promote Ajax businesses, to promote the COVID-19 supports we have for small businesses across the province and to wish my constituents a holiday greeting.”

The comment indicates the two-dimensional and self-serving uses politicians find for their social media accounts. Rather than being a two-way conversation with constituents, the online presence of many politicians is  often carefully managed to act as more of a public relations tool.

They now use these platforms to campaign 24/7, 365 days of the year. Or, when the situation arises, to throw the public off.

The advantages are obvious. A backbench MPP can suddenly become a non-stop crusader fighting for constituents. Dogged cabinet ministers and mayors now often have a team of social media staff, paid for by the taxpayers.

Phillips employed some elaborate media messaging, camera work and graphics in the posts he sent out while in the Caribbean. It seems more and more elected representatives are investing the public’s time and money into an online presence. Office budgets now have space for video editing and staff follow their boss’s every move, camera phones out, DSLR’s clicking away and video cameras on record.

As Phillips has demonstrated on a massive scale, this can come with consequences. Blatantly using social media to portray a misleading narrative doesn’t play well with voters. And as he has proven, politicians, when caught out, can pay a hefty price.

His use of Twitter suggests premeditation, and casts doubts on whether he was truly sorry, as he has said, or if he was just sorry for getting caught.

His behaviour also raises obvious questions about his judgment and fitness for leadership, despite having held senior corporate posts including his time as the head of the Ontario Lottery and Gaming Corporation.

Social media has offered a window into the behaviour of many elected officials.

In Peel, photo-ops posted on social media show politicians who either do not understand the lockdown rules (in place in the region for more than a month) or simply don’t care.

According to the Province’s COVID-19 framework, those living in the lockdown (grey) zone should only leave their homes for the most pressing needs. “Trips outside of the home should only be for essential reasons (work, school, groceries/pharmacy, health care, assisting vulnerable individuals or exercise and physical activity),” the government’s website explains.

Based on his social media presence, Mississauga Lakeshore PC MPP Rudy Cuzzetto appears to count delivering Dominos pizza, attending the opening of a new pizzeria and announcing investments in kayaks as “essential” activities during the lockdown. His Mississauga East-Cooksville PC colleague, Kaleed Rasheed, includes an in-studio TV appearance, a Santa parade and meeting with landlords on his social media during the lockdown. These are just a few examples of the questionable use of social media and the behaviour it often reveals from the dozens available throughout Peel. 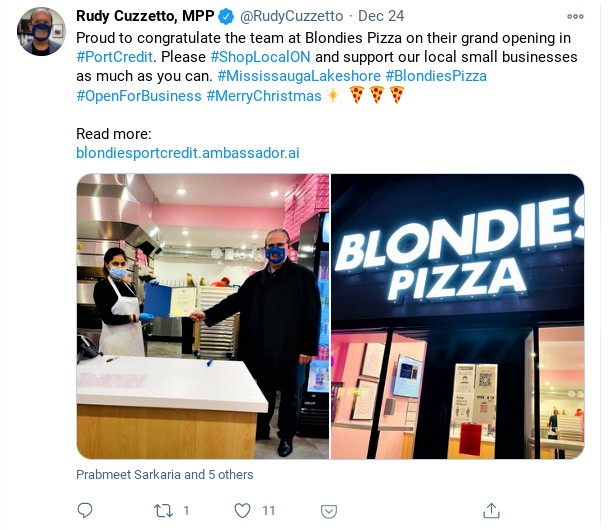 The various activities, clearly in breach of the spirit of lockdown, often require staff to take the photographs or video.

As Rod Phillips moves to the back benches, his decision to travel abroad when residents were told not to, will continue to be the big story. But his use of social media raises concern over how the public is being spun with its own money.