Ontario is at a “critical juncture” in its effort to flatten the COVID-19 transmission curve – a clear peak, and downward trend, are not yet in sight.

On Thursday, Health Minister Christine Elliott reported 1,983 new cases; 515 in Peel and 496 in Toronto. The lockdown in both regions appears to have slowed the alarming rate of increase in November but on Thursday provincial health experts said placing the two areas in the most restrictive category has not yet resulted in a reduction of daily cases, 18 days after both were moved into the "grey zone". 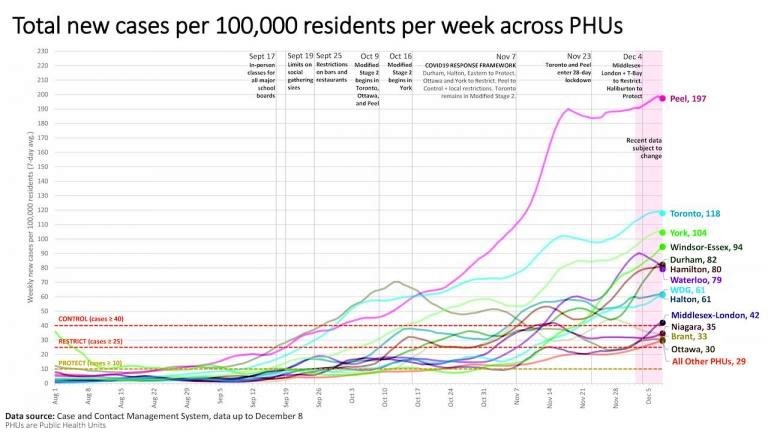 Viral infection rates in Peel have far outpaced all other areas of the province.

Local hospital intake data provide a glimpse into how the exponential transmission of the deadly virus that causes COVID-19 can, in a short time, consume healthcare providers. Mississauga’s two hospitals, run by Trillium Health Partners, have seen an 82 percent increase in new COVID-19 patients over the last four weeks, a spokesperson confirmed in a statement to The Pointer. The highest number of COVID-19 patients cared for to date was on April 27, during the first wave, when the hospital was treating 125 patients.

As of Thursday, Trillium hospitals had 84 patients with COVID-19, 66 of whom are inpatients and 18 in critical care. Those with the virus represent about 6.5 percent of all patients.

Across Ontario, critical care-unit occupancy rates are projected to hover above 200 beds, assuming zero percent growth, for the next month. This could rise if health interventions are relaxed, said Adalsteinn Brown, Chair of the Ontario COVID-19 Science Advisory Table, at a Thursday COVID-19 briefing alongside Dr. David Williams, Ontario’s chief medical officer.

“We’re already within striking distance of the roughly 280 ICU beds that were occupied at the peak of the first wave, and if we do see three percent growth, we will exceed that,” Brown said.

Williams will be recommending further restrictions Friday for certain regions, which he did not name.

York Region, which is currently in the “red-control” restriction stage, has been teetering toward a lockdown. On December 8, CEOs at Markham Stouffville Hospital, Mackenzie Health, and Southlake Regional Health Centre jointly issued a statement saying York’s hospitals are at “a tipping point”.

“After seeing a significant increase over the last week in the number of COVID-19 patients admitted to our hospitals, we are concerned about how this may impact access to care like scheduled surgeries for all patients across our communities,” the statement said.

“The numbers in York are not different than Mississauga’s numbers, and yet their retailers are permitted to be open,” Mayor Bonnie Crombie noted during a COVID-19 discussion at Thursday’s Regional Council meeting.

Last week, Mississauga councillors led a successful vote at the Region, singling Brampton out, to request the Province consider numbers in each of Peel’s three municipalities individually, to determine restriction measures in each, instead of treating the region as a whole. Brampton members did not support the motion which aimed to distance Mississauga from its neighbour because of its high infection rate. 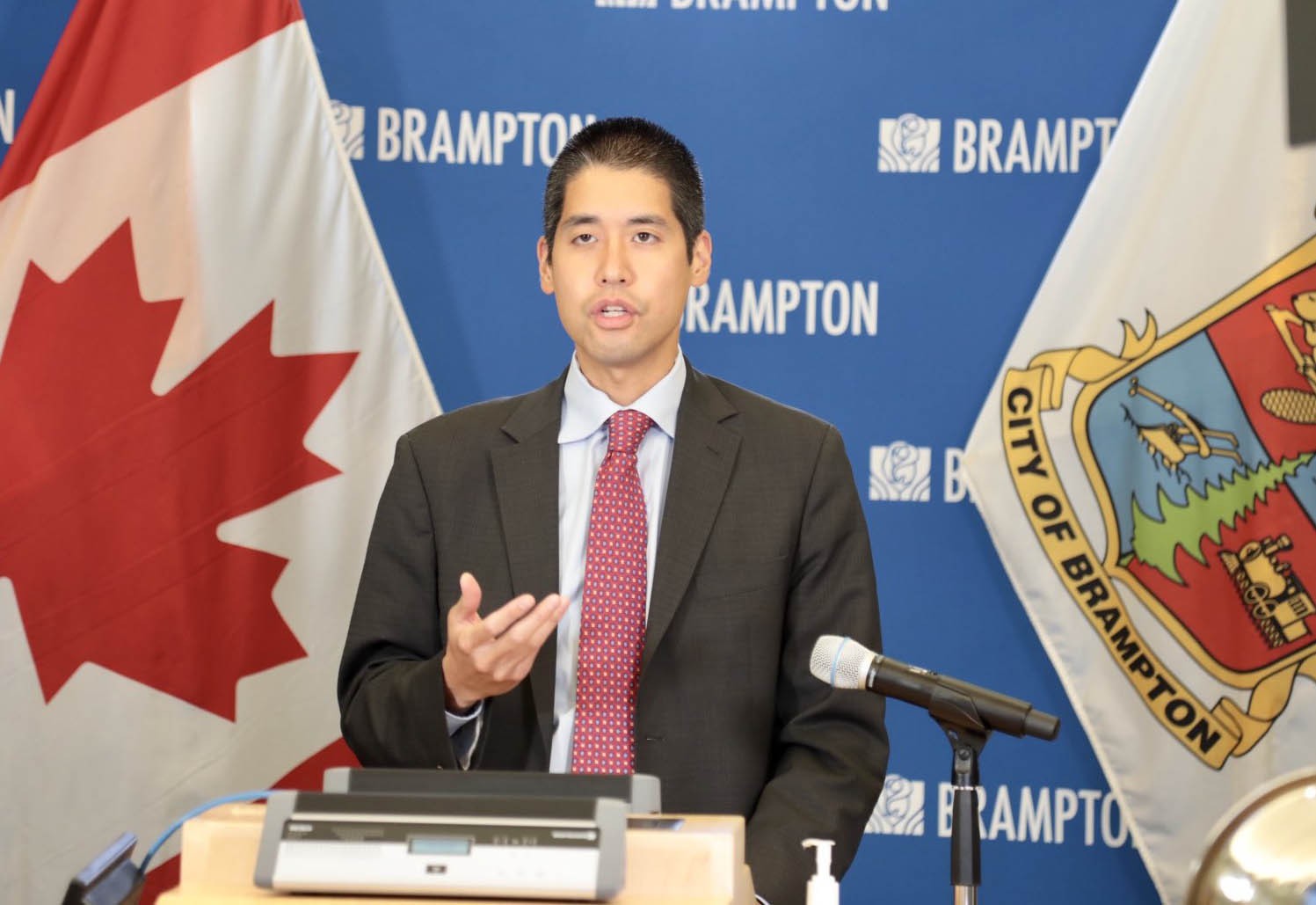 On Thursday, he pointed to “trailing indicators” such as hospitalizations, the picture in long-term care homes and deaths to underscore why loosening restrictions is not being recommended.

Transmissions in Peel are being driven in part by outbreaks in industrial settings and household contacts, particularly in Brampton, where community healthcare service providers are seeing precarious employment push residents into a corner, deciding between heeding public health guidance, or paying the bills.

Dr. Joshua Salomon, a public health policy expert at Stanford University School of Medicine, said health interventions are more effective when bolstered by broader policy interventions, including paid work leave, ways to make isolating easier and better access to testing. He pointed to recent measures by the German government to assist businesses with lost revenue as the country continues its lockdown measures.

“If you look at…countries in Europe like France and Germany, they reacted pretty aggressively at the end of October and in some cases, it took three or more weeks for them to find the peak and see cases start to go down.”

“If we can get some of these measures in place, I would feel a bit more confident – especially if trends and [hospital] capacity improve – around making recommendations that would lead to loosening of restrictions,” Loh said. He told councillors he’s “heartened” by the lockdown results so far, noting that cases are not on the skyrocketing trajectory seen prior to the last 18 days, which represents only one full virus incubation period.

As Peel’s hospitals continue to struggle with capacity issues, they are also affected by recent staff illnesses.

At Trillium Health Partners, 36 staff members have taken time off over the last ten days to recover from COVID-19, spokesperson Keeley Rogers said in a statement to The Pointer. Most of the infections were found to be linked to community transmission.

In addition to those who have tested positive and are self-isolating, screening protocols require staff to remain at home if they present with at least one symptom of the virus. “For this reason, many of our health care workers who are currently off for COVID-19 have not been exposed to the hospital or patients while symptomatic or asymptomatic and awaiting testing,” Rogers said.

Trillium is one of three hospital systems in Ontario with the highest number of COVID-19 patients, Rogers added, and is leaning on surrounding regions to accommodate patient transfers. Trillium is not currently sending patients to York Region hospitals.

Mississauga’s Credit Valley Hospital reported an outbreak in a department, where four patients got COVID-19 in the hospital between November 27 and December 7. The unit has been closed to admissions, but the hospital’s emergency department – which also declared an outbreak after four healthcare workers tested positive – remains open. Outbreak protocols are in place at two heart healthcare units at Mississauga Hospital and at Queensway Health Centre. A total of six patients and three staff members contracted the illness between those facilities.

William Osler Health System, which operates Brampton Civic Hospital, is treating 76 patients for COVID-19, with 61 inpatients and 15 in critical care. Brampton Civic’s emergency department declared an outbreak on December 7 but remains open, while the complex care unit has closed admissions after it initiated outbreak protocols on December 2. Unlike Trillium’s outbreak disclosure, Osler does not appear to disclose the number of patients or staff affected by the outbreak, or the source of transmission, on its website.

Osler did not respond to a request from The Pointer regarding its current capacity situation.

Those seeking a COVID-19 test in Brampton will no longer have the drive-through option, as Osler closed its testing facility at South Fletcher’s Sportsplex. Beginning Thursday, testing has been relocated to Peel Memorial Centre For Integrated Health and Wellness as the system shifts to indoor testing.

“The moves to these new locations may be temporary as Osler continues to work with community partners to secure larger indoor spaces that are suitable for COVID-19 testing over the longer term,” Osler said in a press release.