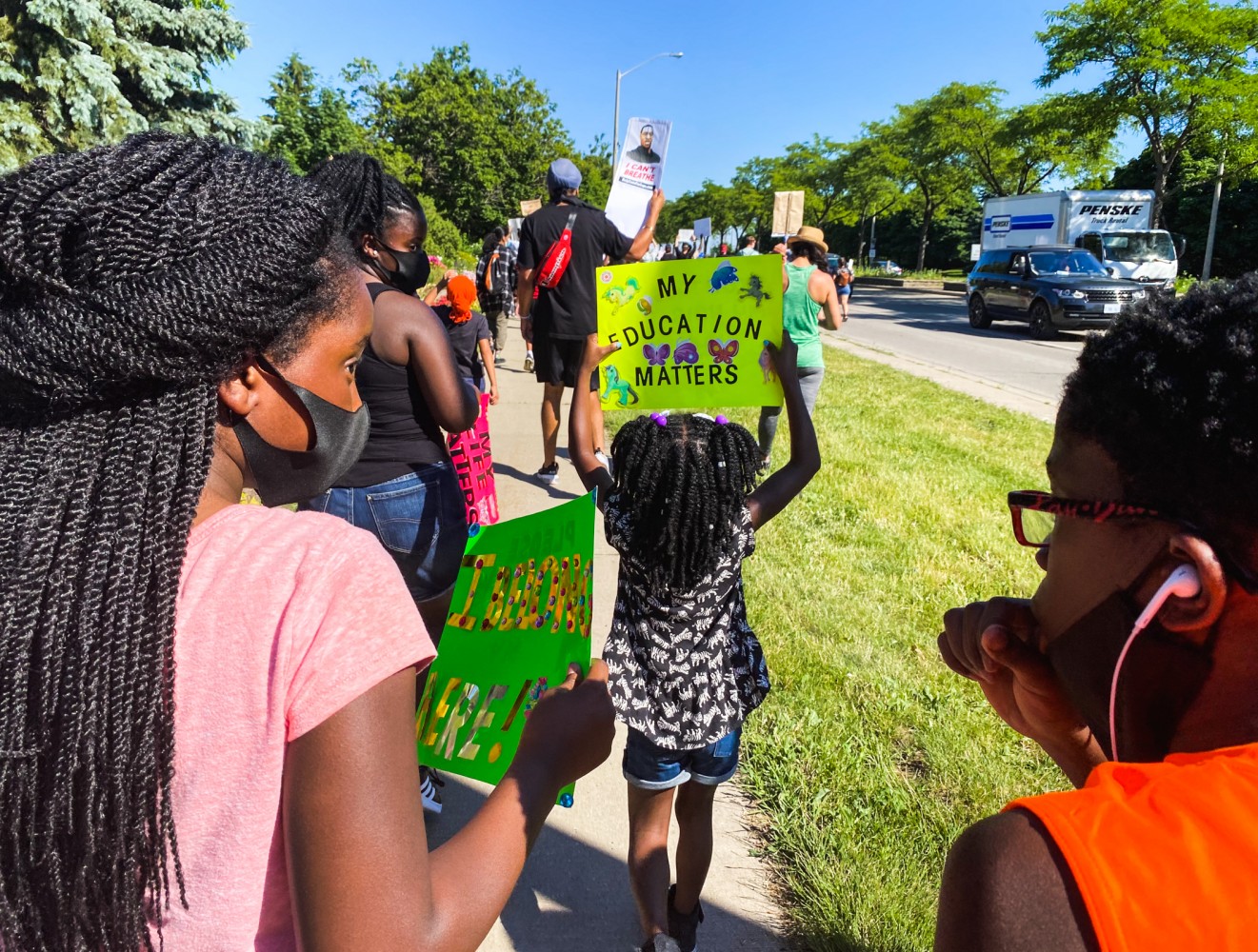 A presence that made many visible minority students fearful inside their own schools won’t cause harm to them any longer: Peel Regional Police officers will not be placed in the hallways of the region’s publicly-funded schools.

In a statement released late Wednesday, Peel Police announced the School Resource Officer (SRO) program, which was put on hiatus in July of this year for a “vital review” during a tumultuous period when the extent of systemic racism at the Peel District School Board was being exposed, has now been officially quashed.

“While there was support for the SRO program, which is primarily dedicated to secondary schools, in many segments of the community, there are also long-standing concerns about systemic racism and the disproportionately punitive effects this type of traditional programming can produce,” the statement reads. “We are committed to action and working in partnership with the community to effect much-needed change. Based on recommendations made by those most negatively impacted by this programming, the SRO program no longer exists. Moving forward, PRP will continue to work with our community regarding student engagement programming.” 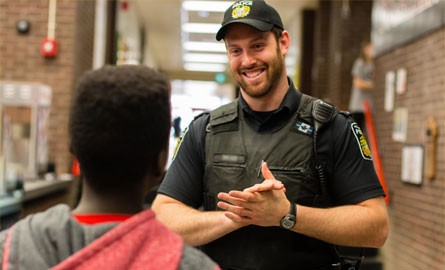 The Peel Regional Police have long defended the SRO program. On Wednesday, the force scrapped it, acknowledging the harm it causes for Black and other visible minority students.

Officially ending the SRO program marks a stark change in tone for a police organization that has historically defended the program, and its supposed benefits for youth and the police force.

Created 20 years ago, the SRO program was meant to build relationships between youth and police officers, act as an initial recruitment pathway as well as address issues and complaints on school property. Every secondary school in Peel had an assigned SRO. The impact was often traumatic and deeply damaging for students, particularly those who are Black.

PDSB Trustee Kathy McDonald, who has fought for the elimination of the SRO program for the last five years, and who brought forward the motion at the board leading to the program’s review and eventual dissolution was “elated” by the news.

“It’s just earth shattering…I think of all the kids that had injustice done to them by this program,” she said. “Kids that have been traumatized, kids that are afraid to leave their homes, innocent babies that have been handcuffed and left to sit in a jail cell…We have to start looking at all these victims as human beings, as people.” 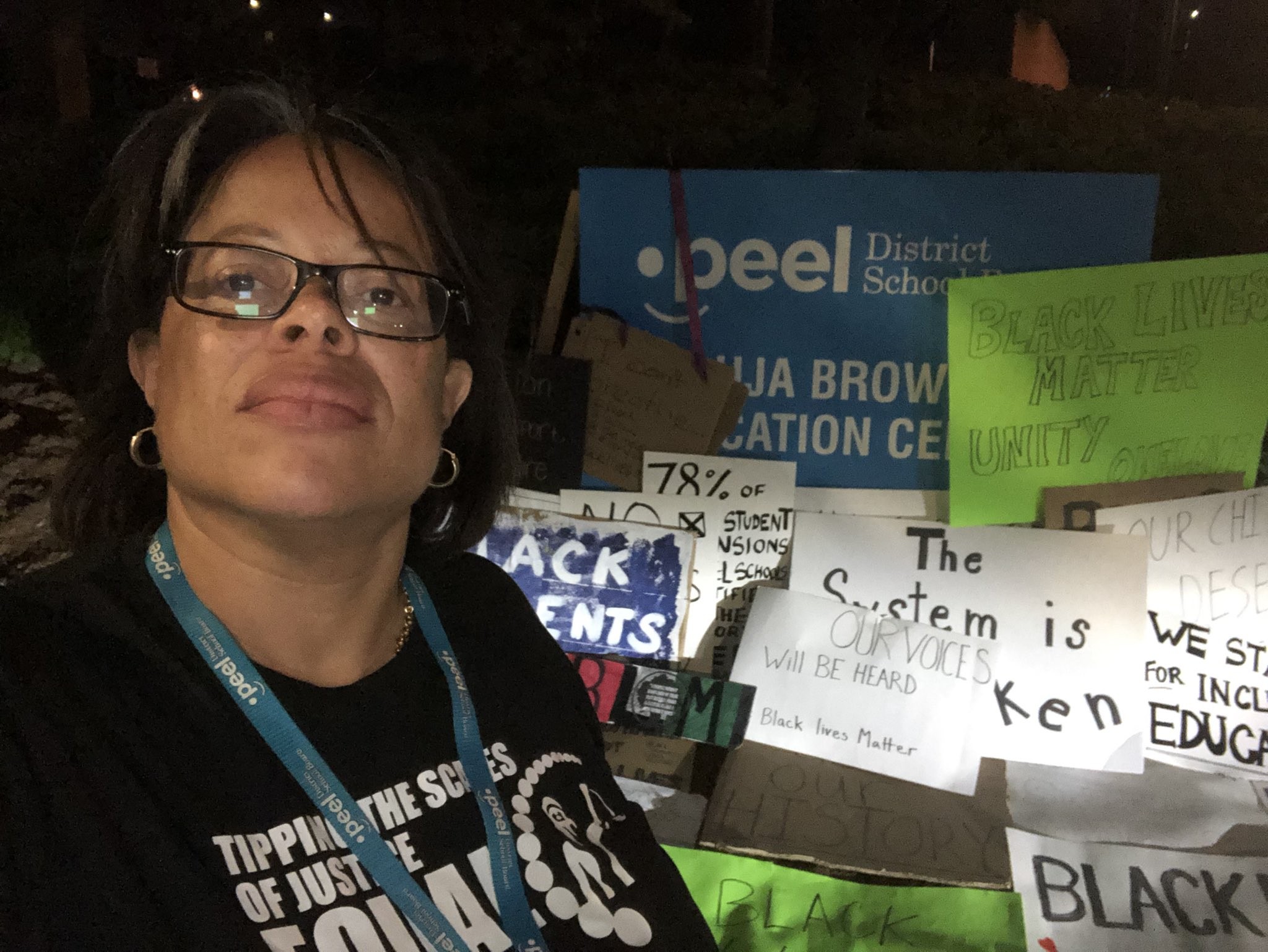 PDSB Trustee Kathy McDonald has been fighting to remove police officers from local schools for the past five years.

McDonald described Black students routinely detained by officers inside schools for behaviour that did not warrant such harsh, destructive treatment.

As part of its review launched earlier this year, the force formed a committee of community members to work with PRP and learn how the program has negatively affected youth.

“It was evident during the consultation phase that the current SRO program caused a negative impact on segments of our student population,” PRP stated. “Change was necessary.”

The cancellation marks a significant step toward addressing long-standing problems around diversity and inclusion within Peel Police, an organization that has a long history of ignoring calls for improved equality.

A scathing audit of the PRP completed by the Canadian Centre for Diversity and Inclusion released last year, described a police organization that systemically discriminates, harasses and punishes those who try to speak out. The audit found the majority of those who were asked about the SRO program “did not have a positive view.” Town hall attendees noted concerns about their children being criminalized and carded while at school, and stated the only goal of the SRO officers was to collect information about potential crimes. The findings of the audit were released in March, after Chief Nishan Duraiappah was sworn into the job late last year. He arrived with an agenda to solve many of the long-existing problems around diversity and systemic discrimination.

“Change is coming,” Duraiappah told The Pointer in June of this year, after less than a year on the job. “My efforts to ensure we are watertight and that we are strong for the future, will be shown in real, systemic, structural change – activities that are coming. I just ask that the community come alongside us. It’s an opportunity to help us get there, that’s what we need.” 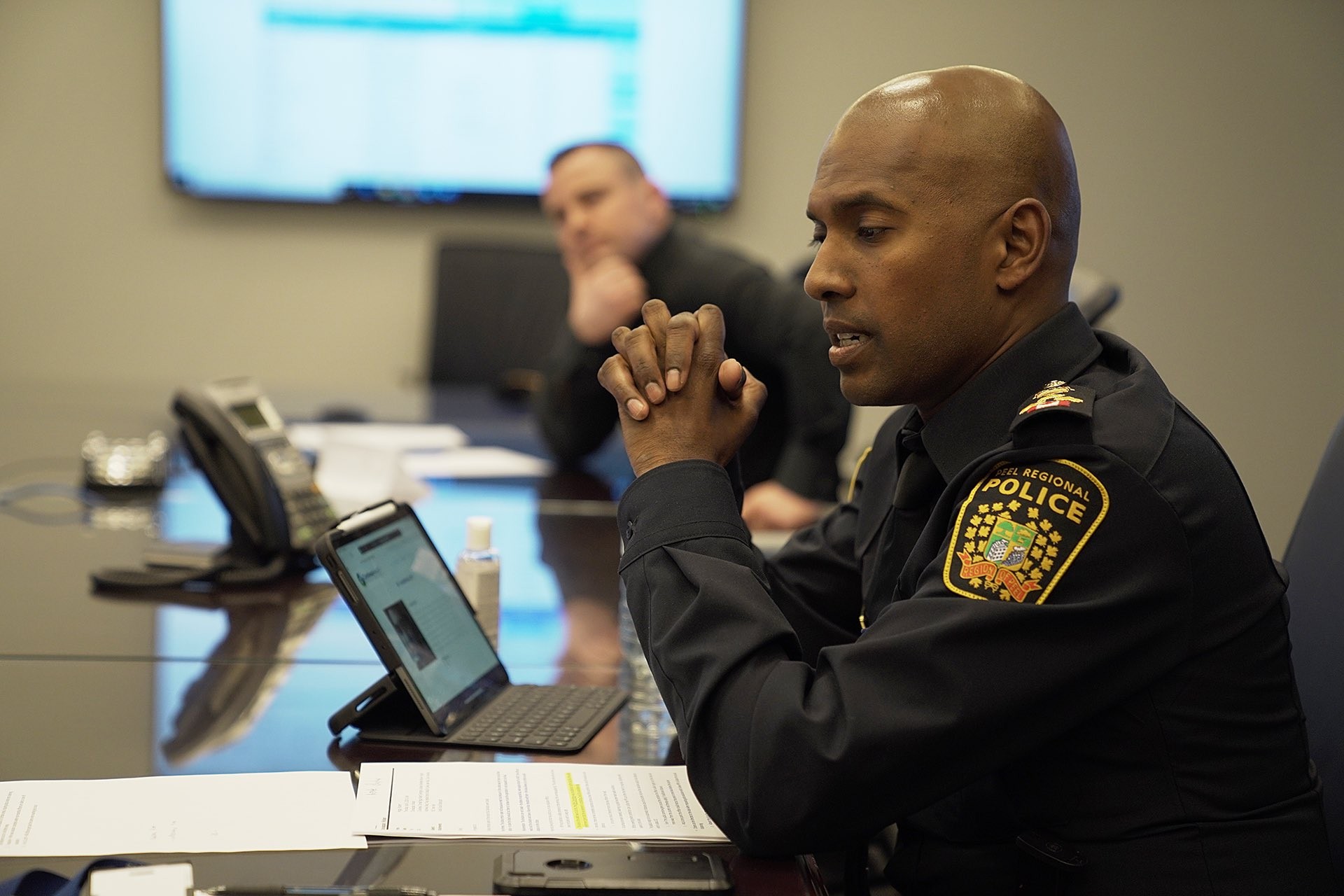 Looking at the actions of PRP from just two years prior, it’s clear a shift in attitude and leadership has taken hold.

The Peel Regional Police has bullishly defended the SRO program in the past. In November 2017, the Toronto District School Board cancelled its own SRO program after complaints that racialized youth felt targeted and intimidated. The decision sparked debate about officers in schools across the province. However, in January of 2018, a widely criticized study by a Carleton University academic into Peel’s SRO program found no such issues, and praised the successful program for reducing bullying and making more children feel safe at school. However, only a quarter of the students surveyed for the study identified as being part of a visible minority population, despite PDSB’s student composition that is approximately 84 percent non-white. The Region of Peel’s overall population included 65 percent of residents at the time of the Carleton study who identified as visible minorities. The university report’s lack of visible minority representation, especially from those in Black communities, was seen by many experts as grounds to disregard the work. Yet, the PRP continued to hold the study up as confirmation the SRO program was effective.

The program’s elimination is not only a positive indicator for the future direction of Peel Police, it also helps to eliminate barriers for racialized youth in the education system. A provincial review of the PDSB found visible minority youth, particularly Black and Indigenous students, were being passed over disproportionately for gifted programs that would set them on paths for future success. Trustee McDonald says the changes happening now are ones that will have significant benefits for young students.

The SRO program was also a key point of contention for parents and advocates within Peel’s Black communities during their fight against systemic discrimination within PDSB. Between the announcement of a provincial probe into the school board in November, 2019 and the dismissal of controversial former director of education Peter Joshua in June, parents kept up the pressure. They demanded reform at PDSB from top to bottom and police in schools was one of the things they wanted to see go.

At a meeting in February, where the police were called to PDSB’s headquarters, parents were protesting the shackling by two police officers of a six-year-old Black girl at a PDSB school. One of the officers served as a liaison for the school. Furious, after the Human Rights Tribunal of Ontario found race played a role in the disturbing treatment of the young girl by two Peel police officers, parents advocated against a culture of embedded racism. A system of criminalizing Black residents was perpetuated, they said, by police in schools.

In a brief statement, PDSB’s new Director of Education Colleen Russell-Rawlins expressed her support for the program’s cancellation.

“Peel Regional Police's decision to dissolve the SRO program is a necessary change to disrupt systemic racism in our school communities. Collaboratively, with students, their families, trusted community partners and staff, we commit to creating learning spaces where all young people feel safe and respected,” she stated.