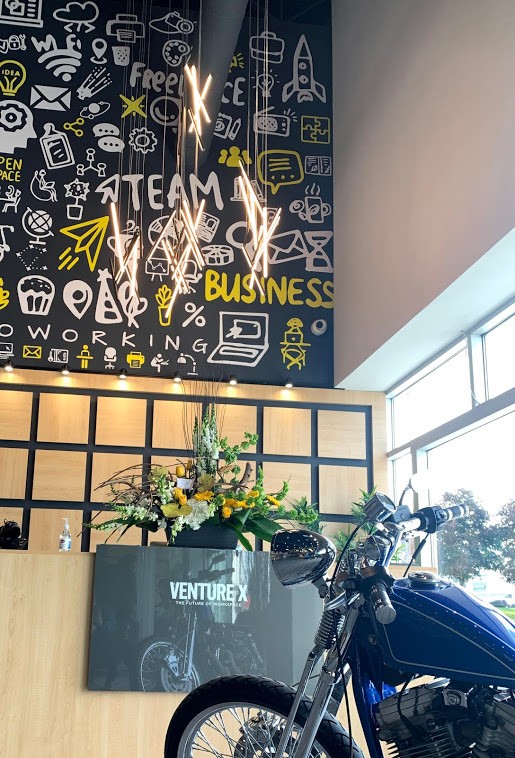 Mississauga’s Venture X is shaping the future of office work in the suburbs, where the talent lives

Mississauga’s newest office isn’t located where you might expect to find it — in a tall, glass building. It’s built in a space that once housed a furniture store and soccer bar on the edge of Matheson Boulevard, an area with a mix of residential and small-scale industrial spaces. The site is unconventional and nestled in the heart of a typical suburban plaza, sharing a parking lot with PetSmart, Party City and an LCBO.

The setup is a contrast to the increasingly ambitious office towers that dominate downtown Toronto. But, while those shimmering structures have stood almost empty since March when employees snatched up their ergonomic keyboards and headed for home, this nondescript space could be the future of work.

Venture X is a Mississauga-based office provider that opened its most recent location at 600 Matheson Boulevard, and says the pandemic isn’t derailing its plans for expansion. The firm’s policy — which involves taking over empty buildings in suburban spaces and converting them into state-of-the-art shared office space — was in motion even before the pandemic hit. 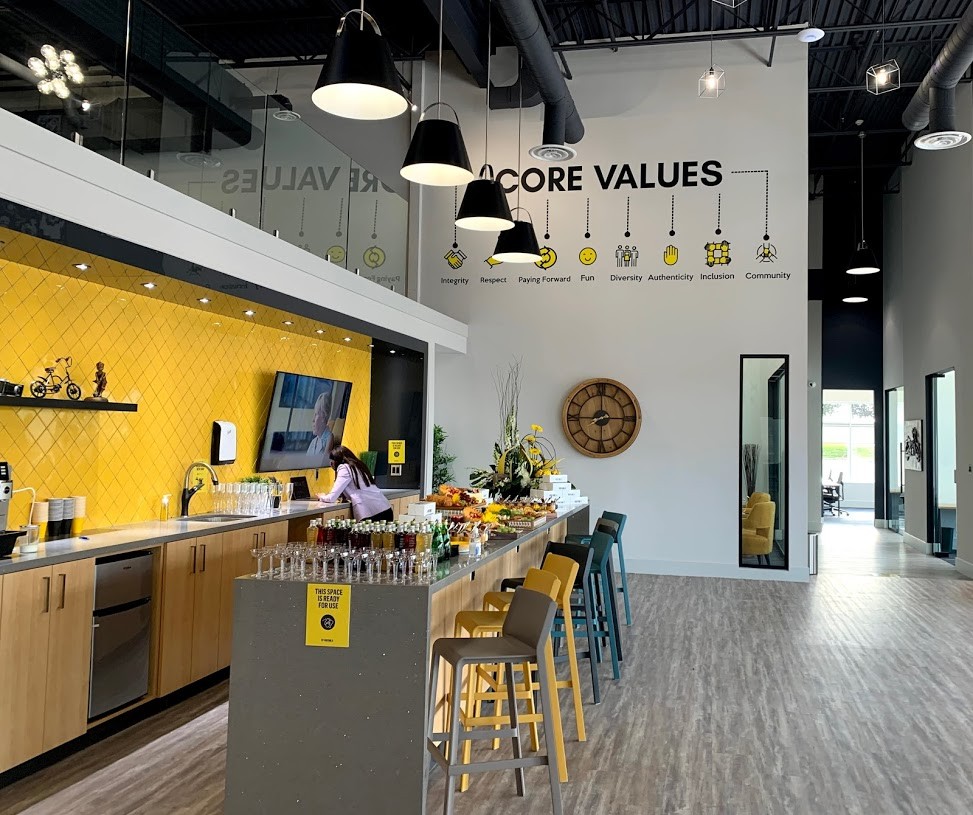 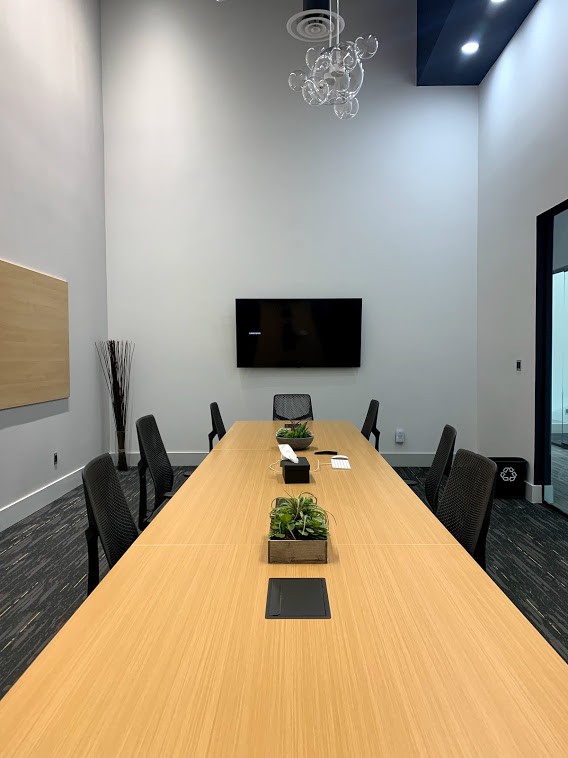 “We made a decision, we have a road map,” Anas Saltaji, chief operating officer at Venture X, told The Pointer at the opening of their new location in the city’s Heartland area. “When the pandemic started back in March, we had a conversation about our future growth, about whether we would stick to our plans or whether we’d let a factor affect them. The decision was [to] continue with what we do and deal with the issues as they come.”

Saltaji says the strategy is paying off. Roughly 80 percent of clients at Venture X’s other spaces, including two more in Mississauga, are back in their shared offices with new physical distancing measures. The Heartland location has seen at least three separate requests for offices from local businesses, even as builders are still adding the finishing touches to the latest units.

The pandemic has upended life as we knew it, including our notions of work. Is the office building dead?

At first, those in a range of industries clawed back hours previously filled by train, bus, or car commutes and replaced the time with homemade coffee, a morning workout, or some much needed sleep. Chief financial officers salivated over the money that could be found as internal real estate operations, including sky-high leasing arrangements, suddenly went from cost centres to sources of major savings. 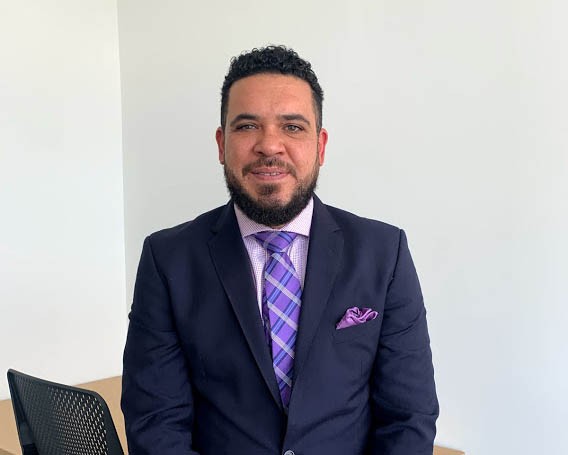 COVID-19 precipitated a move some analysts had predicted for years. One study by Prodoscore Research, a company specializing in sales performance and time management, found productivity was up 47 percent in 2020 based on data from March and April. Twitter announced in March its staff could work from home indefinitely, Shopify joined the trend and others like Facebook and Microsoft followed.

Amid the excitement of this dramatic work-life change, reality crept in, too. The home-office is much different from a work space. Inside a house or apartment, video pitches can be done in pajamas while kids play nearby, and pets chew on the cables. It’s different, very different.

Nicholas Bloom, a senior fellow at the Stanford Institute for Economic Policy Research, predicted this in March: “We are home working alongside our kids, in unsuitable spaces, with no choice and no in-office days. This will create a productivity disaster for firms.”

His forecast was apt (other than the prediction about productivity loss) and now, with no sign of the pandemic waning, people are looking to re-balance.

“I think a lot of the bigger companies and corporations are actually realizing people are not as productive at home [over a long period of time] as they would be in the office,” Saltaji said. “Yes, it’s easier because they don’t have to be COVID friendly within an office space they already have, but working from home — as a father of five — it’s not possible. I’m sure I am not the only one that has children around the house. Unfortunately, [when] kids see their father or mother at home, they cannot differentiate if their parent is busy working or if they can sit in their lap and help them type.”

It’s a narrow analysis, as only children within a certain age-range, who remain at home for one reason or another, would cause the distraction he describes. But a host of other disquieting conditions no doubt push up against the various benefits of working from home.

Research by Microsoft came to a similar conclusion. In the short-term, the benefits of working at home seemed numerous, but it’s hard to conjure something from nothing: Some of the initial gains in productivity inevitably tapered as a sense of fatigue and other stresses replaced the earlier benefits.

Using anonymous data from Microsoft Teams, a professional conferencing software, the tech giant made some interesting discoveries. It built upon the findings to further investigate and demonstrate problems with working at home.

One particular investigation found the brainwave patterns associated with stress and overwork appeared more regularly at home than in the office. “Due to high levels of sustained concentration, fatigue begins to set in 30-40 minutes into a meeting. Looking at days filled with video meetings, stress begins to set in at about two hours into the day,” the research explains.

A spike in productivity early on in the pandemic could also be explained, at least in part, from overwork. In an office setting and at home, workers take breaks, but how they use them might be different. At home, a break on the sofa or making a cup of tea feels like a lack of productivity.  Conscientious staff may be tempted to make up for the time later in the evening. A similar break, or kitchen chat in an office, is unlikely to result in workers staying there beyond 5 p.m.

Microsoft's research supported the theory. Activity on its Teams platform increased by about 15 to 23 percent between 8 to 9 a.m. and 6 to 8 p.m. Weekend usage has shot up more than 200 percent.

A hybrid model (a blend of home and office) appears to be the long-term solution going forward.

It’s a model that suits Venture X’s game plan perfectly. The company rents office space to its tenants along with access to shared board rooms, meeting spaces and phone rooms. Its new Mississauga facility features a physical distancing lounge for workers to collaborate. Giving companies the option of having people work from home some days, and in group spaces, seems like an ideal balance.

As big and small companies come to grips with exactly what their future might look like in a post-pandemic age, there is room for ambitious innovation to shape demand. Venture X is focusing on the suburbs, with no plans to compete for spaces in downtown Toronto. The reason? Suburbia is where the talent is, and where it lives.

The company homes in on start-ups and new businesses, and is making Mississauga a key focus. To start a new venture, or operate a small business, most entrepreneurs are short of money and experience. It’s the profile of many entrepreneurs who have moved to a suburb and settled down to raise a family. Peel is a key destination, and these new flex office spaces might better fit the needs of many new or expanding businesses.

Downtown locales come with sky-high rents based on square footage, and are fortified by a closeness to public transit and busy street life.

There’s also a caché or cool factor around swanky or hip office spaces in industries that typically don’t look at the suburbs anyway. Startups in the advertising industry, for example, might lust for the too cool spaces that dot Toronto, but in industries that focus on function over form, a cheaper, and more flexible alternative often fits a company’s needs. And who knows, for the next Shopify, even if they can afford the ultimate open-space work environment, maybe it will be shared by a mix of other successful ventures.

As the pandemic makes commuting and personal interaction more difficult, priorities might shift for good, and office life could change — perhaps forever.

The composite drawing of the office space might be one of the biggest changes we’ll see moving forward, and companies like Venture X are offering up a different option.

“Ideally we want to have a diverse community of different startups [so] that they can learn from each other and mentor one another,” Saltaji said. “For example, we want to have an insurance broker that sells home policies, and their neighbour to be a mortgage broker. Next to them could be a real estate agent. There’s referrals and collaboration in our space.” 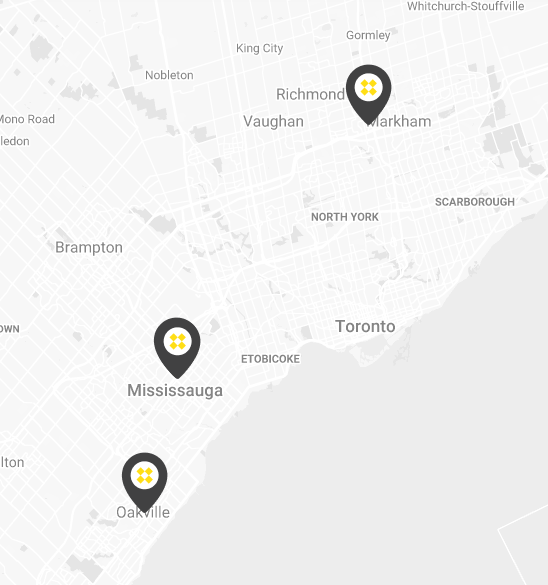 Venture X says it doesn't plan to build in Toronto's downtown and believes talent and demand are located in the suburbs.

The former furniture store setting in a Mississauga plaza conforms to the advice issued by the Centers for Disease Control and Prevention. Among a slew of relatively obvious suggestions like removing communal coffee pots, it recommends limiting the use of elevators. Towering urban offices don’t fit the advice, but shared office spaces in areas like Mississauga do. They can spread out over one or two floors. Proper ventilation will also be a major consideration moving forward, and the flex-building model will have to offer up solutions to the dangers of stagnant air.

Offices are as old as the business world itself. But how these places of work look and feel and where they are located is what Venture X is all about. It wants to change the traditional model, but isn’t giving up on the office space – just changing its look.

“There’s a thing about getting up in the morning, getting in the shower, putting on your clothes and getting into the car to drive to your office. It just helps you create that positive energy,” Saltaji said, fondly.