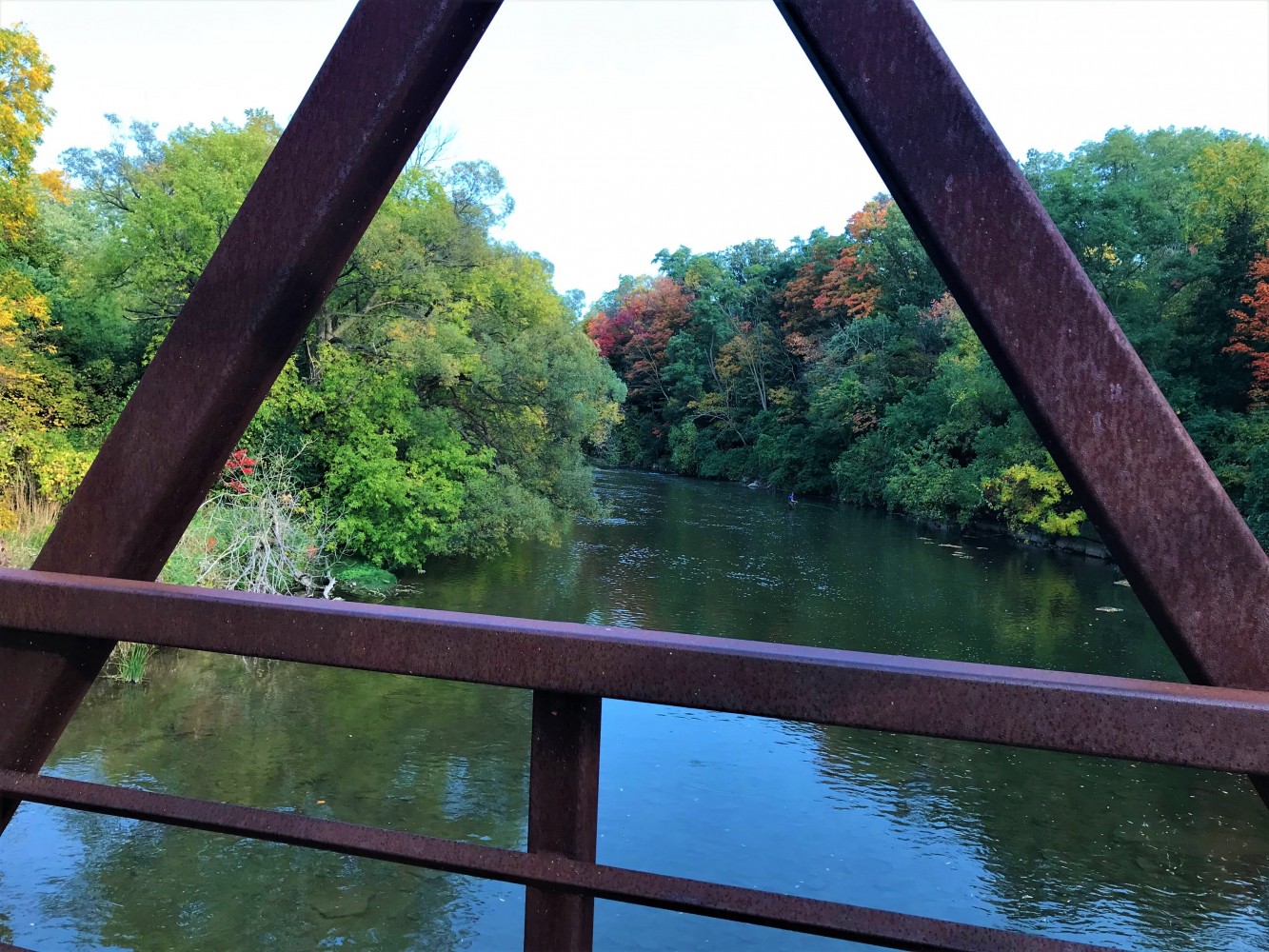 Up to 2,000 litres of diesel leaks into Credit River threatening Mississauga’s natural oasis

A large cleanup effort took place on the Credit River Friday, after 2,000 litres of diesel was dumped about five kilometres east of the embankment, making its way through the stormwater system into one of Mississauga’s most cherished waterways.

On Thursday afternoon, a host of government authorities responded to a resident reporting a diesel slick on the surface of the river around Lakeshore Road and Port Street. The oily substance, clearly visible on the water’s surface, represents an immediate threat to one of Mississauga’s few truly natural spaces. 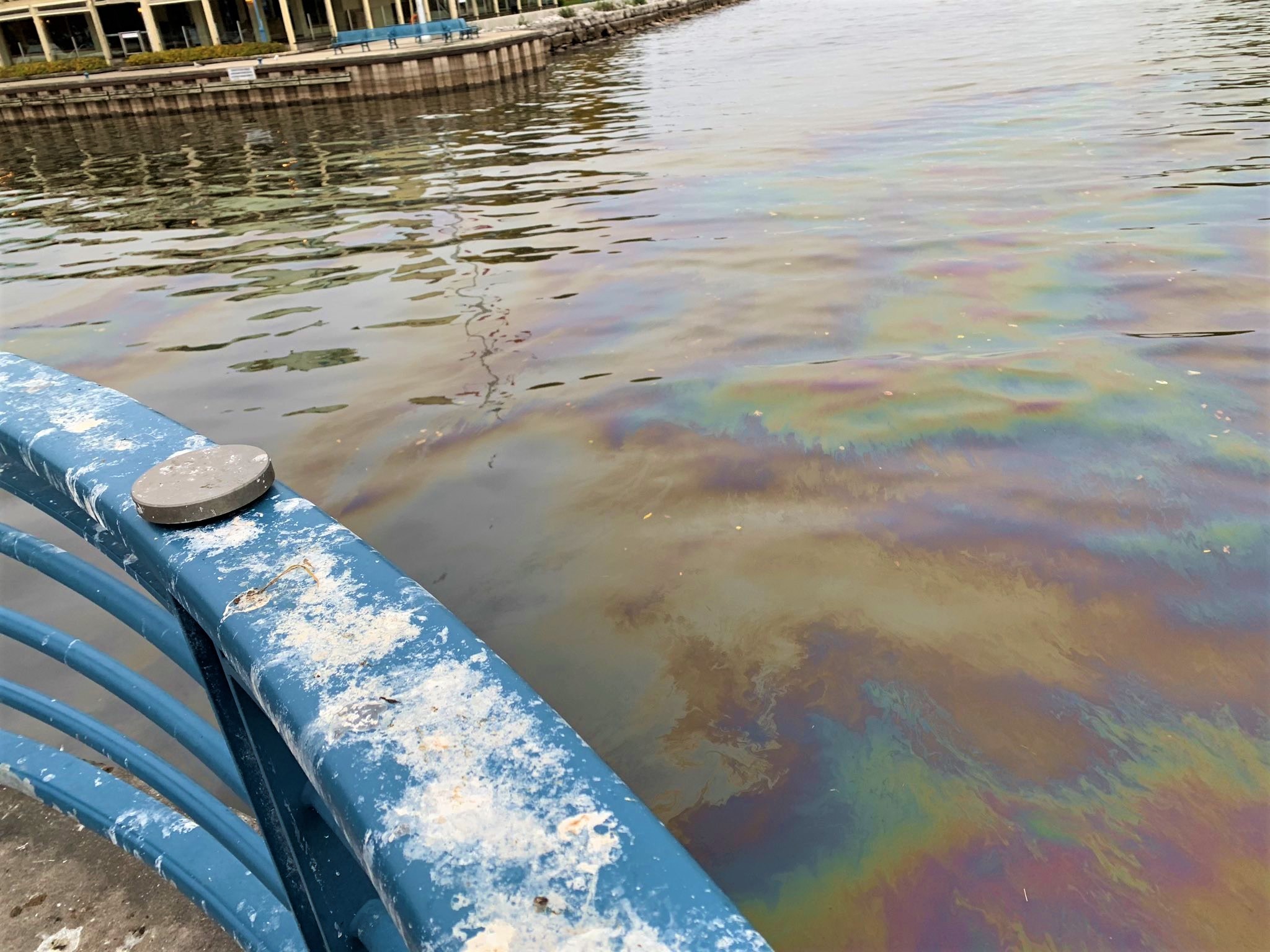 Diesel on the surface of the river, near the marina at Lake Ontario, was clearly visible Friday

“I understand that an owner and/or contractor dumped oil tanks on their property yesterday that they mistakenly thought were filled with water,” Mississauga-Lakeshore MPP Rudy Cuzzetto told The Pointer Friday.

It took until Friday to locate the source of the spill: a business at 3473 Wolfedale Road. It’s the address of Danco Logistics Inc., a trucking transportation company. The contents of two oil barrels reportedly at the location ended up in the city’s stormwater system, and the contaminants eventually emptied directly into the Credit River approximately five kilometres to the west.

“This is absolutely horrendous — this is the last thing that you would ever want to see,” Ward 1 Mississauga Councillor Stephen Dasko told The Pointer. “Our watersheds are fragile to begin with, we’re trying to go out of our way to rehabilitate and strengthen them with partners like Credit Valley Conservation. Something like this is hard to see.”

Cleanup was expected to be completed by the end of Friday, with the Region of Peel standing guard over the contaminated waterway over the weekend.

“The property owner has retained a company that is conducting cleanup of the spill at the property,” a spokesperson for the Province’s Ministry of Environment, Conservation and Parks told The Pointer, adding cities and regions could recover the costs of cleanup. “In all cases the first and preferred approach is to identify the owner or controller of the spill and require them to take action, rather than having the ministry undertake clean up and restoration.”

The fragile watershed Dasko described begins at the headwaters above the Niagara Escarpment near Orangeville. Usually clean and crisp, surrounded by a rainbow of colours this time of year, the Credit River flows gently south. 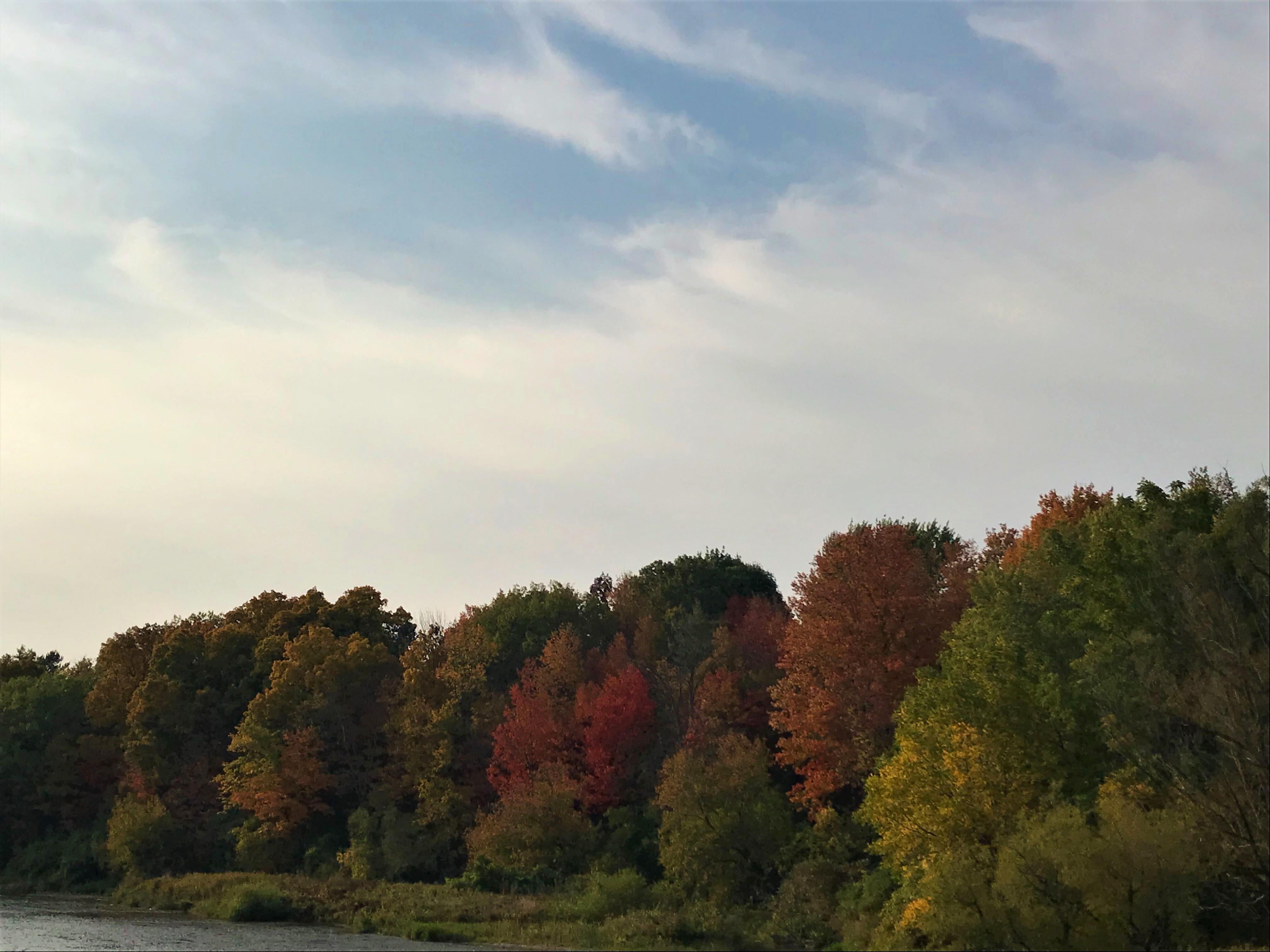 As the water meanders downwards toward Lake Ontario it enters Caledon, home to a growing number of illegal trucking operations. The land set aside for some of the last remaining agricultural operations in the GTA has for more than a decade been pocked by unlicensed, unregistered commercial logistics businesses that have been the cause of numerous complaints to local officials for years. On days with particularly heavy rainfall, these outfits pose an immediate threat to a beautiful river, teeming with wildlife.

Further on, it runs through Brampton. The car-dominated city is home to a series of trucking, logistics and industrial manufacturing businesses that use a range of chemicals. Toxins can seep into the watershed, emptying into the Credit.

In Mississauga, passing under the Queen Elizabeth Way, the river nears its end, carrying a range of chemicals and substances that pollute its waters.

A 2018 report card prepared by the Credit Valley Conservation Authority (CVCA) reflects this, scoring the river’s northern sections a B (good) for quality and health, dropping its assessment to C (fair), D (poor) and F (very poor) through Mississauga and into Lake Ontario. 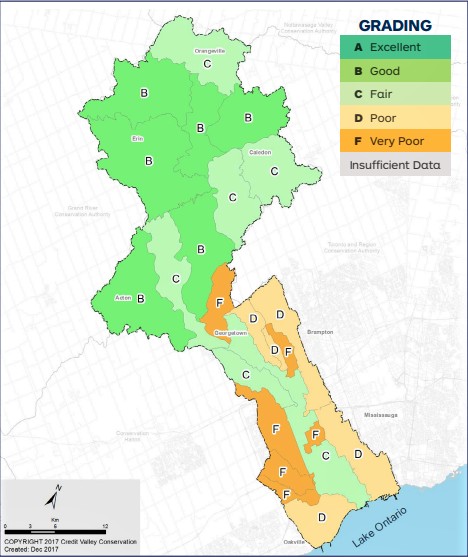 If all this wasn’t bad enough, as years of converting Peel’s farmland erodes the quality of local watersheds and threatens wildlife, this week saw the river struck by an avoidable disaster.

The spill offers a clear visual representation of the environmental degradation eating away at the Credit River throughout the years, and coincides with a stunning season. Along the water, salmon are spawning beneath a canopy of brilliantly coloured trees.

The local conservation authority has said it cannot yet estimate the damage to local wildlife, but the news is unlikely to be good. “Credit Valley Conservation leads water quality monitoring in the Credit River and its tributaries through a network of real-time gauge stations,” a spokesperson for the provincially governed agency told The Pointer. “We also monitor aquatic habitat and fish communities through our environmental monitoring programs. At this time, it is too early to determine what the impact of this spill will be to aquatic habitat and local fish populations.”

According to the Province, the spill stretched over a three-kilometre section of the river from the QEW to Lake Ontario. Birds covered in oil are being captured by Mississauga Animal Services and, in partnership with Toronto Wildlife Centre, are now being cared for. 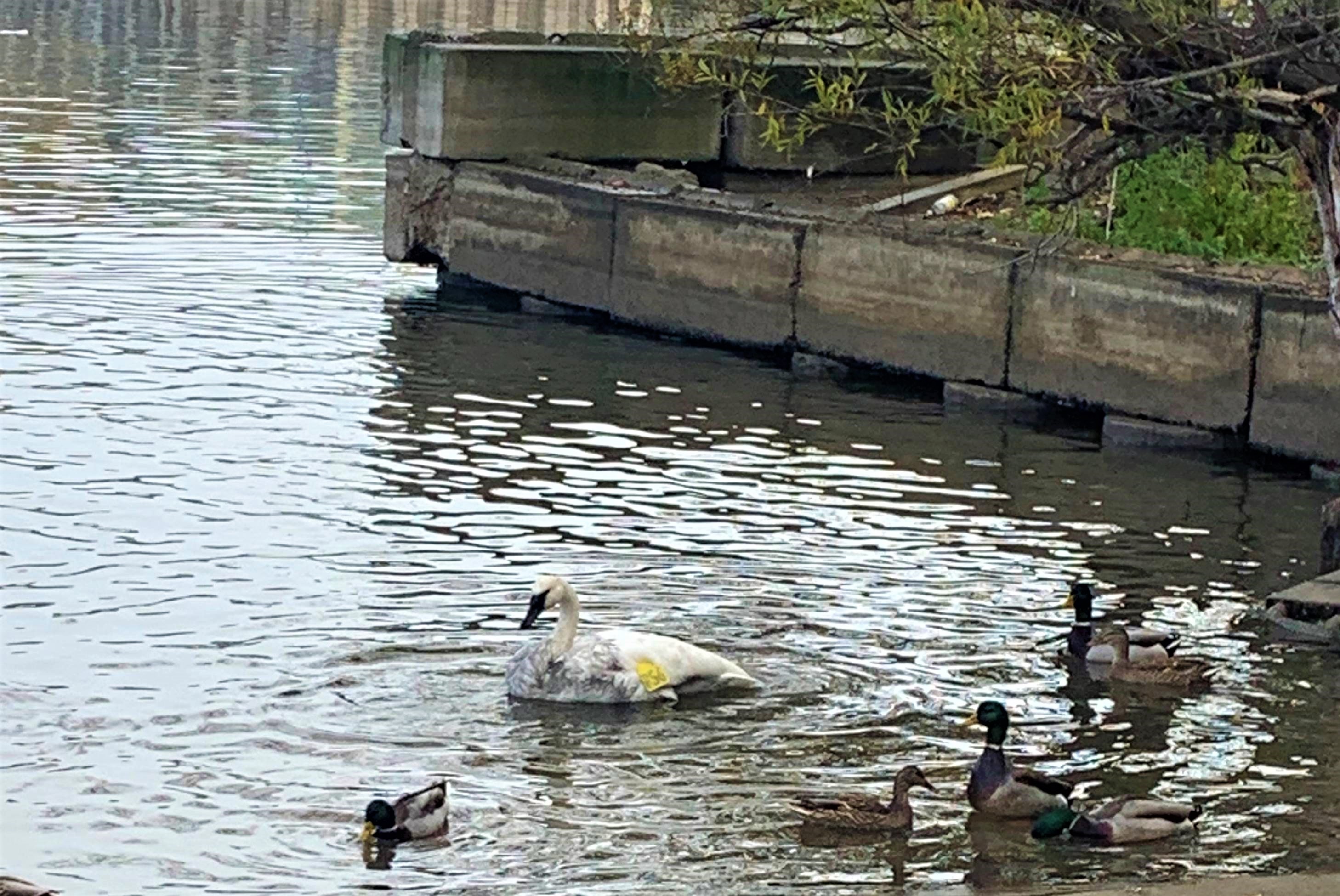 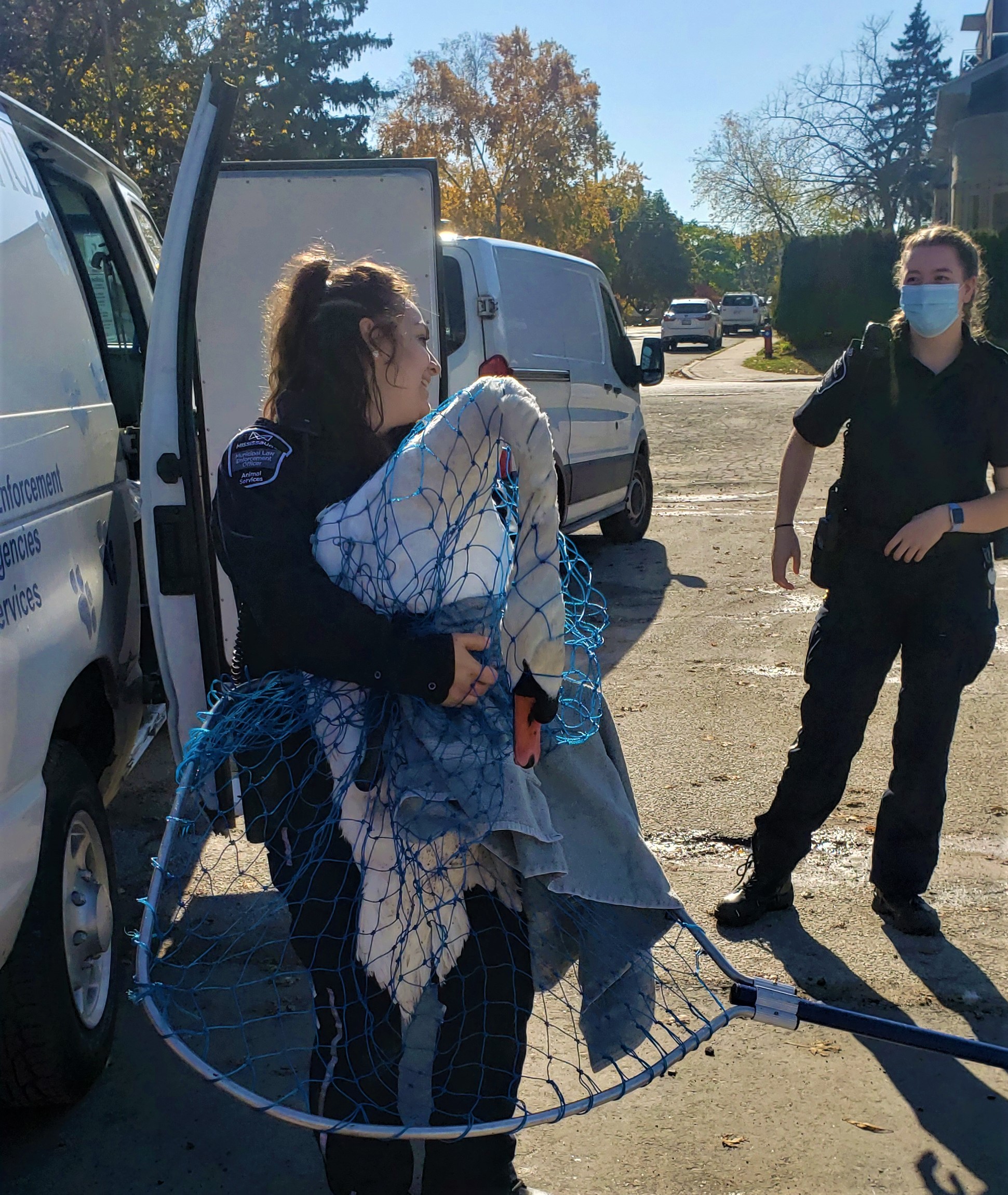 Peel Region, working with the Ministry of Environment, Conservation and Parks, said spill reports happen daily in Mississauga and Brampton, with around 600 incidents reported annually. At as much as 2,000 litres of diesel, according to the Region of Peel, Thursday’s disaster is estimated to be the most significant since the early 2000s.

“They need to be held to account,” Ward 2 Councillor and Credit Valley Conservation Authority chair, Karen Ras, told The Pointer, speaking about the company responsible for the spill. “It sends a very bad message that other companies would be allowed to do this [if they go unpunished]... That could have detrimental impacts in the long-term.”

Cuzzetto was one of the several local politicians hovering around the cleanup. Using his Twitter account, he updated residents on the status of the spill and what measures were being taken to help with the cleanup.

The Progressive Conservative MPP is part of an administration at Queen’s Park that has worked consistently to reduce the scope of conservation authorities, telling them in August 2019 to “refocus” and “wind down” non-essential work. The Doug Ford government is also currently in the process of changing the legislation regarding Environmental Assessments (EA) to rush through projects including the GTA West Corridor.

Cuzzetto characterized his government’s action, particularly the streamlining of environmental assessments, as “modernization”.

“We will maintain strong environmental oversight on projects that have the highest potential impact to the environment, while also exempting low-impact projects, such as bike lanes and roadside parks,” he said in an email.

His assessment stands in contrast to the words of Keith Brooks, programs director at Environmental Defence, who decried the plan as an ecological disaster. “I don’t see how they can suggest that they’re protecting the environment while rushing through an Environmental Assessment [plan that will reduce the work],” Brooks previously said.

“Respectfully, the modernization of Ontario's EA process for infrastructure will not make future mistakes like this any more likely,” Cuzzetto said.