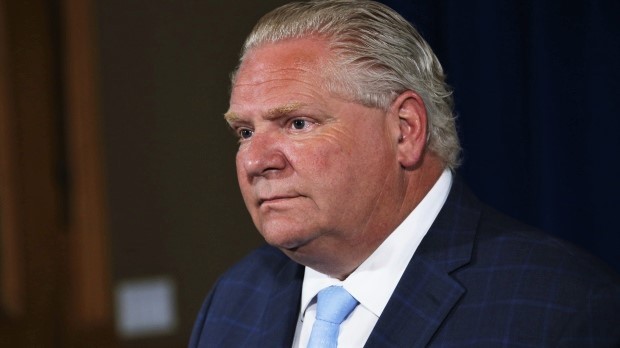 Ford and Elliott warn Peel could be sent back to Stage 2; Crombie says Mississauga is not the problem

Brampton and Mississauga residents have for six weeks enjoyed more liberties, after Queen’s Park finally gave Peel Region the green light at the end of July to enter Stage 3 of the reopening schedule. Many businesses and other members of the public had lamented that Peel was kept in Stage 2 longer than most other parts of Ontario.

Now, with cases surging across Brampton and, to a much lesser extent, parts of Mississauga, Premier Doug Ford and Health Minister Christine Elliott are making it clear: they will send Peel back to Stage 2 if COVID-19 cases here continue to be consistently higher than other parts of the province, outpacing the numbers that were seen earlier in the summer when many restrictions were lifted under Stages 2 and 3.

“We will take every step necessary, including further shutdowns,” Ford said, referring to the province generally, but when asked later what that might look like he added, “We have to look at it (by) regions.” During the Monday press conference he said any return to Stage 2 would begin with problem areas. “We have three hot spots right now,” he said, referring to Peel, Toronto and Ottawa.

He said, after consulting with public health officials from each of the three jurisdictions, that the primary problem is large social gatherings.

“Folks, I’m begging you, please, just cut out social gatherings.” Ford suggested it is not necessarily bars and restaurants that are the problem, as the vast majority are adhering to strict social distancing and other safety requirements. More informal congregations, in people’s backyards, other public spaces and sometimes in venues that are flouting the rules, have been highlighted as the main problem behind many of the recent cases.

The Pointer has recently observed in Brampton large gatherings within parking lots in and around strip malls and plazas, and outside restaurants.

“This COVID, it’s ramping up again. We just can’t have the large social gatherings,” Ford said.

Elliott warned that Peel might have to be returned to Stage 2 if its numbers do not come down.

“We need to understand what’s happening in the different regions,” she said, adding that her government doesn’t want to return certain areas back to Stage 2. “But if we have to, we will.”

She said she has been in close contact with the chief medical officers in Peel, Ottawa and Toronto, “to understand what’s going on.” She said the government wants to take “a more regional approach” if a return to Stage 2 is forced by unacceptable numbers in certain areas, “rather than step back the entire province.”

She repeated what was outlined recently, that a 28-day period was decided on, to halt any further business reopenings or other loosening of restrictions while the numbers in certain parts of the province, primarily Peel, Toronto and Ottawa, surge. “We need to take a pause.”

If that pause becomes a roll-back to earlier restrictions in Peel, Mississauga Mayor Bonnie Crombie told The Pointer last week that her city should not be lumped in with Brampton.

“I think it is an important question. I think what you see across the GTHA, specifically and especially in Peel, is people live and work seamlessly across the borders and we know that the virus knows no borders. That said, we have made great strides in Mississauga and our case numbers don't warrant a closing, so I'm very hopeful Mississauga will remain re-opened. There was a precedent in Windsor-Essex, where Windsor moved to Stage 3 and Essex region was held back. We've made great strides, our cases averaged at 10 this week, seven last week and even fewer the week before that. So there is a small uptick, however, I know Mississaugans are very diligent... I am very hopeful we don't have to revert back to Phase 2. We will obviously consult with Peel Public Health... before we make any of those kinds of decisions."

Mississauga’s numbers crept higher over the past week, but are still nowhere near the rate of Brampton. Through much of August and into the first week of September the rate of new cases in the smaller of the two cities was between four and five times higher per capita, and on certain days, such as September 2 and 6, Brampton reported alarmingly high numbers. On each of those days it accounted for 37 percent of the province’s reported cases. During the last three weeks, Brampton has had more than 20 percent of Ontario’s cases, despite only having 4.5 percent of the province’s population.

Ontario’s numbers, largely due to Peel, Toronto and Ottawa, have been steadily rising over the past two weeks. On Monday, Ontario reported 313 new cases, the highest number in three months. The Region of Peel has yet to update its numbers for the last two days, as of publication.