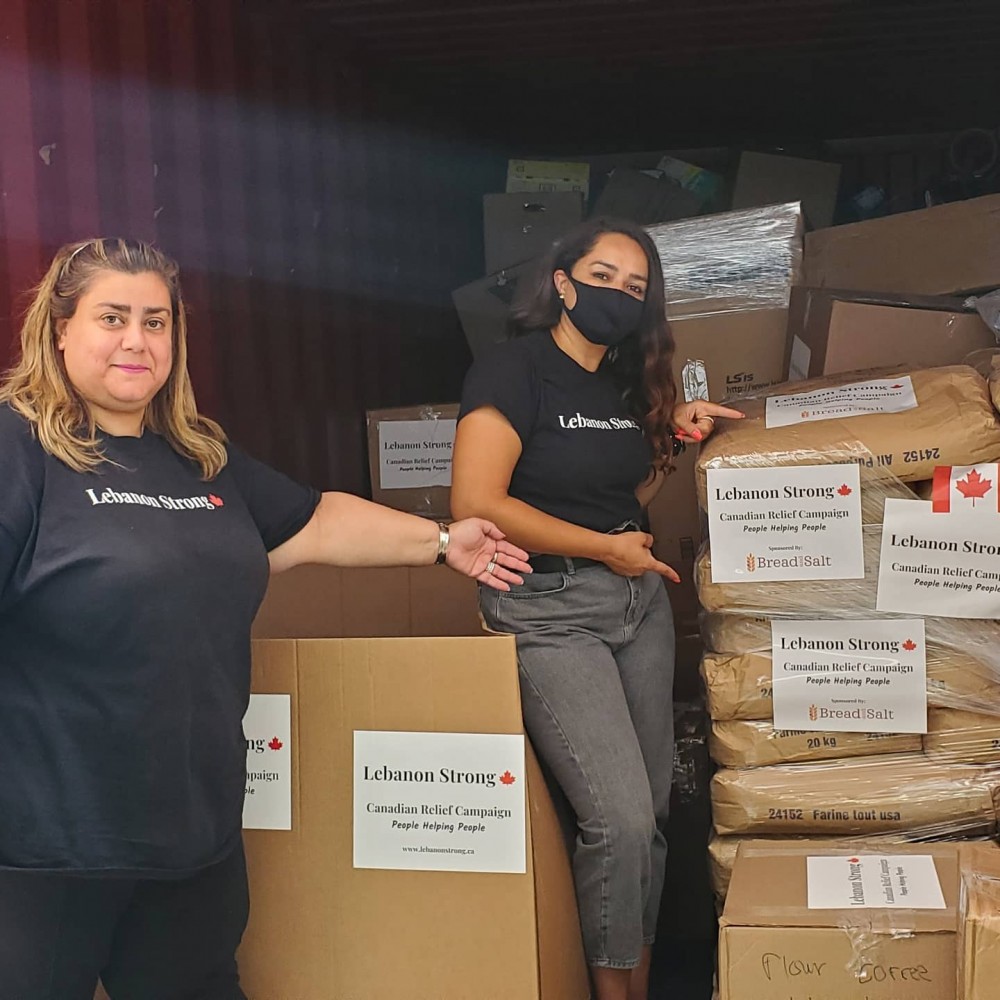 On August 4, Lina Alameh Khalil quickly started a Facebook live stream of a fire surrounded by dark, thick clouds, along the Port of Beirut. The seaside area was visible from the high-rise Khalil resided in, and the glass walls surrounding the room allowed for a perfect vantage point for the dramatic video being filmed. But the worst was about to come.

An explosion erupts and only a couple of quick gasps are heard in the live-stream recording, before the blast sends shockwaves through the trembling room, sounds of the violent explosion and its aftermath filling the air.

The widely circulated video was one of many documenting the Beirut explosion that shocked the world. Upward of 200 people have lost their lives. Thousands have been wounded and homes throughout the entire area were destroyed by the detonation of tonnes of highly flammable ammonium nitrate that sat in the Beirut port. Facebook updates show Khalil and her partner were injured, but are now recovering from the blast. 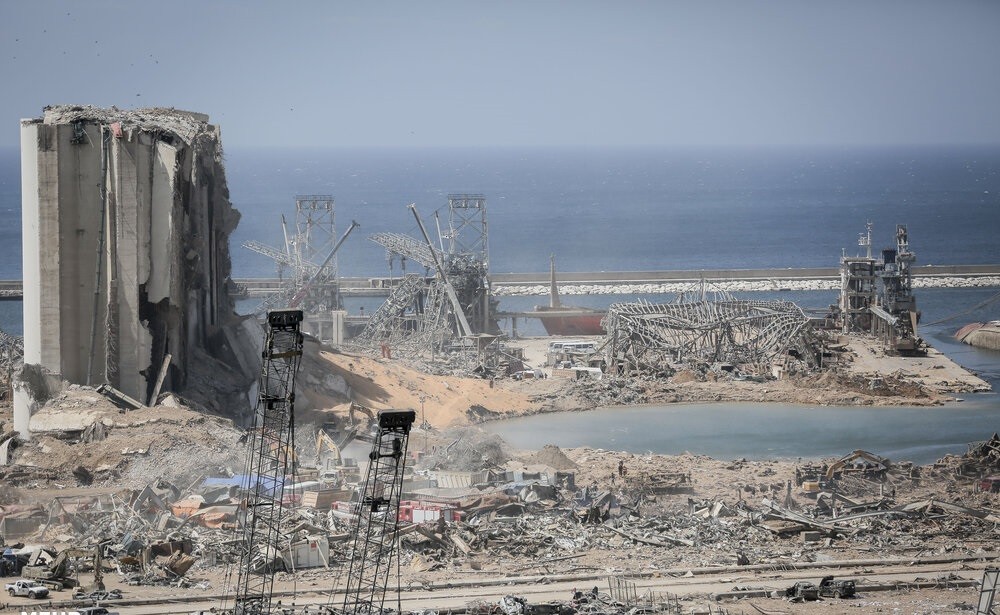 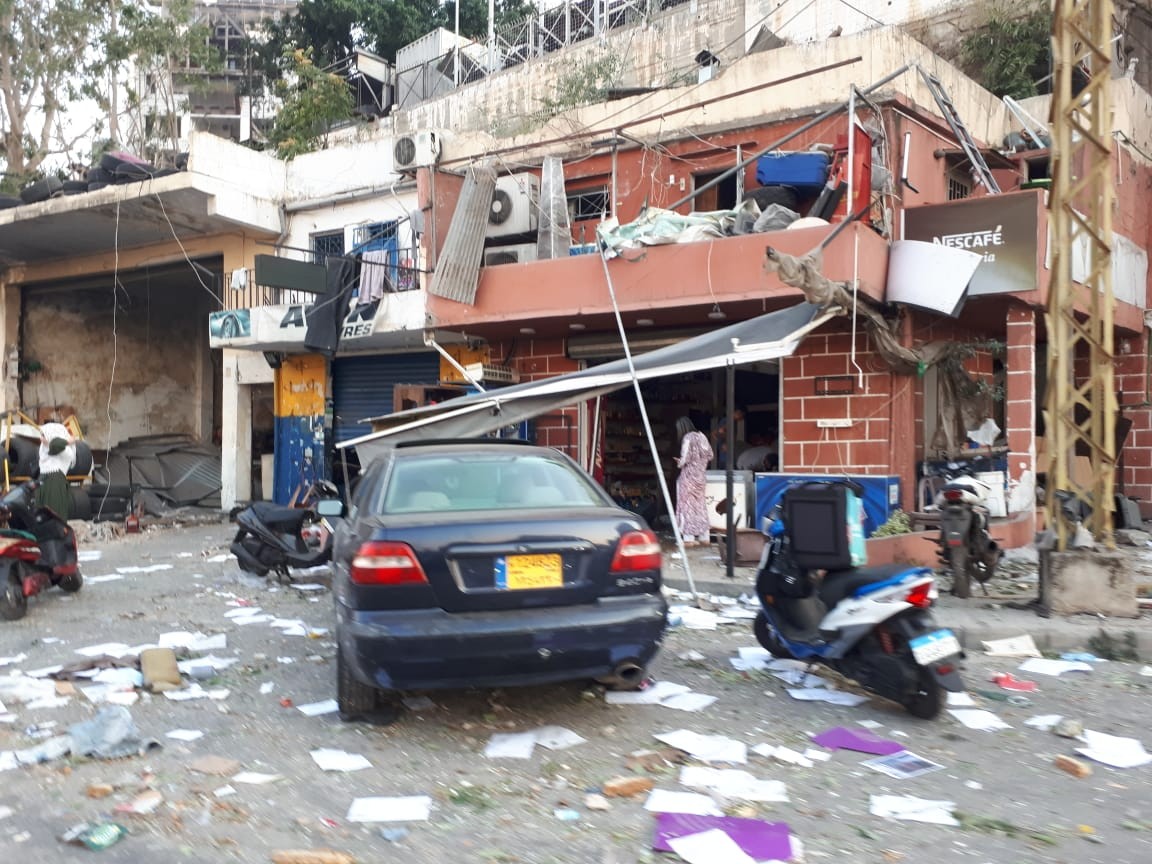 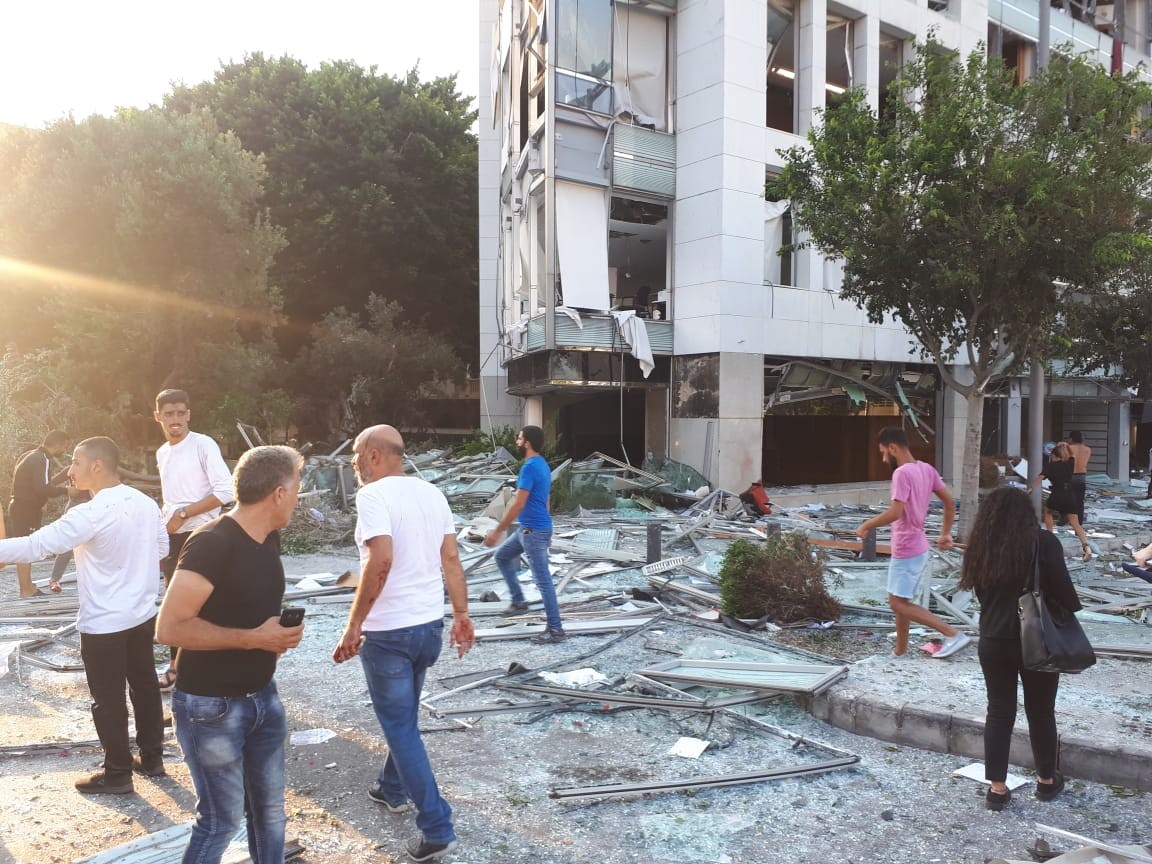 It has been a month since the explosion and Soha Chami still hasn’t been able to process it. The Mississauga resident, and Beirut native, doubts she will ever be able to understand why the blast happened. “To me, it's unacceptable because of the negligence and the corruption that led to this.” She said it’s still unclear if “sheer negligence” was what led to the horrific disaster. The cause of the explosion is currently being investigated.

Chami was in the middle of her workday when she learned about the catastrophe through various videos and messages shared on social media. The first set of photos came from her sister. Images of her home with shattered windows and drapes strewn on the ground filled Chami’s screen. At first, she thought the house had perhaps been broken into. Soon after, she came across videos showing what had happened and couldn’t process what she was seeing. “At this point, I can't work anymore,” Chami says, still emotionally shaken, the strains of her struggling voice coming through the phone as she’s interviewed. She says she’s still in disbelief.

The first thing she did was call her family in Beirut. “[Whoever] you talk to they said that their windows shattered, the doors are open. Like it's an earthquake right here.” Her cousin had just finished renovating her home, which overlooked the port where the explosion took place, Chami said. “She's a widow. Like, imagine you work hard, you fix your house, just finished renovating and everything…is devastated,” she said. All of Chami’s family members survived the blast.

Chami wished she could have gone back to Beirut during this precarious time but that wasn’t an option, joining the many Lebanese natives in Mississauga who found themselves in a similar position. They wanted to help, but were thousands of kilometres away, a world removed. 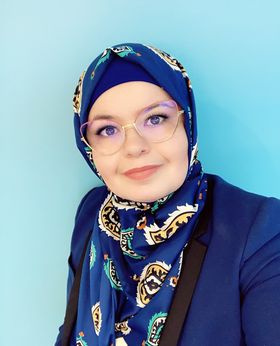 Hamsa Diab Farhat was in the same situation. The founder of Taste of the Middle East, a non-profit organization, Farhat is connected to the larger Lebanese-Canadian community. When Dina Bakhit, owner of a Mississauga export business, Global Logistics Management, reached out wanting to send containers full of supplies to Lebanon, Farhat, who has a public relations background, was on board. Together, they created the Lebanon Strong Campaign with the goal of sending 30 shipping containers full of food and supplies in three months to assist small charities all over Lebanon. “We want to get to the smaller charities because Lebanon has been going through an economic crisis from before the blast. So we want to help as much as we can.”

Like Chami, Farhat also has family living in the city and jumped on the phone to reach out to them as soon as she heard what had happened. The next thing on her list was to help set up a vigil at Nathan Phillips Square in downtown Toronto to allow the community to comfort one another and find succor. Over 700 people attended, Farhat said. A vigil was also held at Celebration Square in Mississauga.

Seven containers have been filled and the organization is trying to raise more money to ship three of them to Lebanon, with the average cost of $3,000 for one shipment. With corporate sponsors and donations, four containers are ready to be shipped. The first, full of first aid supplies and dried food goods, will get to Lebanon September 26. The second container, filled with medical supplies and wheelchairs, will arrive October 16. A third container full of firefighting equipment has also left Canada and a fourth container with personal hygiene and food items will get to Lebanon Oct 10.

The organization has gotten the assistance from musicians and politicians, including Mississauga Mayor Bonnie Crombie, to help raise awareness and load up the containers. A lot of younger people have also stepped up and taken part in the cause, using social media to help spread the word. 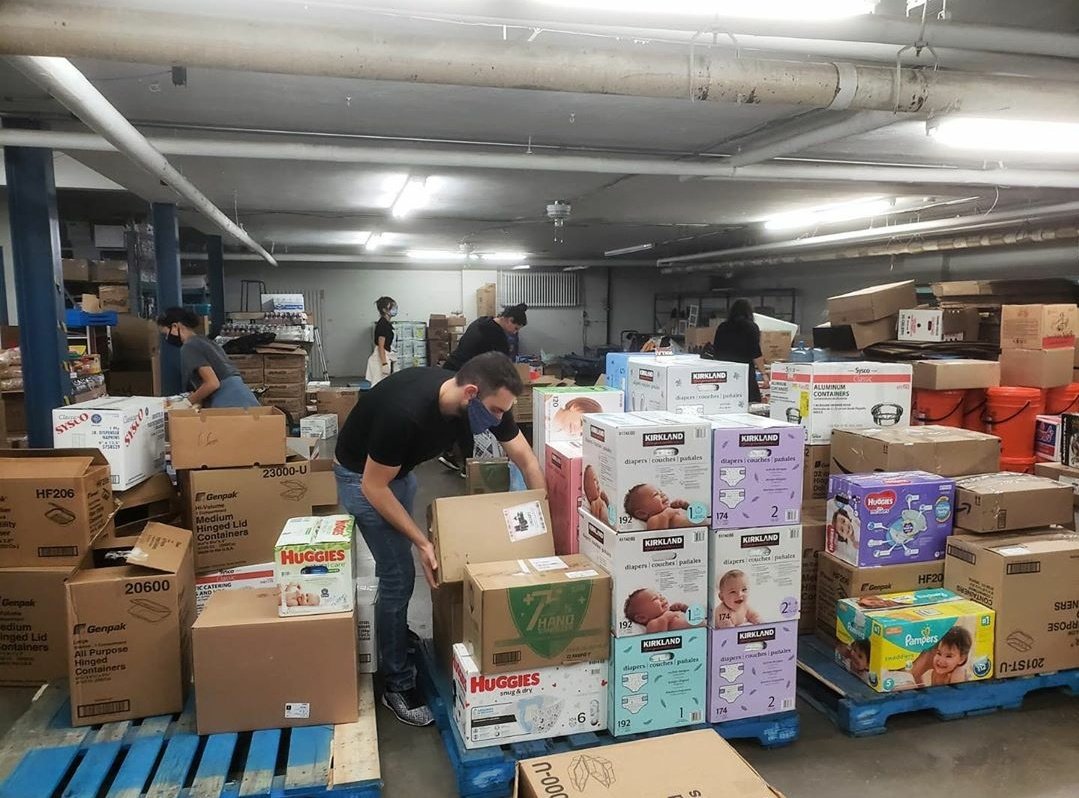 Many people in Canada have volunteered their time to gather supplies for those impacted by the explosion.

Farhat’s 15-year-old son Ali told The Pointer he learned about the explosion through Snapchat, and while he doesn’t have as strong a connection as his parents, he felt emotional. “I just feel like a little part of me could be lost,” he said. Ali was among a group of young volunteers helping the cause. Chami’s own daughters also assisted in filling up one of the containers.

Seeing this made her proud. Even though her daughters grew up in Canada, they knew where their roots extended to. “They're connected and they're so hurt and they were even sharing posts more than me on social media. It's amazing how you see this, youth are so well versed and [know] how to leverage social media,” she said.

Lebanon Strong is one of the many movements addressing the fallout from the explosion. One of Chami’s friends raised money to send to a charity that focuses on smaller projects, such as helping people fix a broken window or a car windshield, damaged by the blast. All of these acts, big and small, virtual or set in real time, are part of the larger effort and love for the country that Lebanese-Canadians left behind.

“Every Lebanese person who immigrated feels guilty because they were given a chance to live in a country where they feel respected and living a life not worrying about the lack of electricity, water, or food,” Chami said.

The blast was the latest in an ongoing list of problems the country has gone through. Economic downturns, corruption and political unrest have caused disruptions in the country for decades.

While donations were coming in steadily in the beginning, momentum has since slowed, Farhat said. She’s not sure if all 30 containers will be able to get to their destination in a timely fashion, as originally planned. Neither Farhat or Chami have been surprised by this. Both told The Pointer they are grateful for all the community support, but like most causes, as time goes on, donations slow, often when a crisis continues. Chami hopes Canadians will continue their remarkable support and says remembrance will always live on. “August 4…the Lebanese people, they will never forget.”