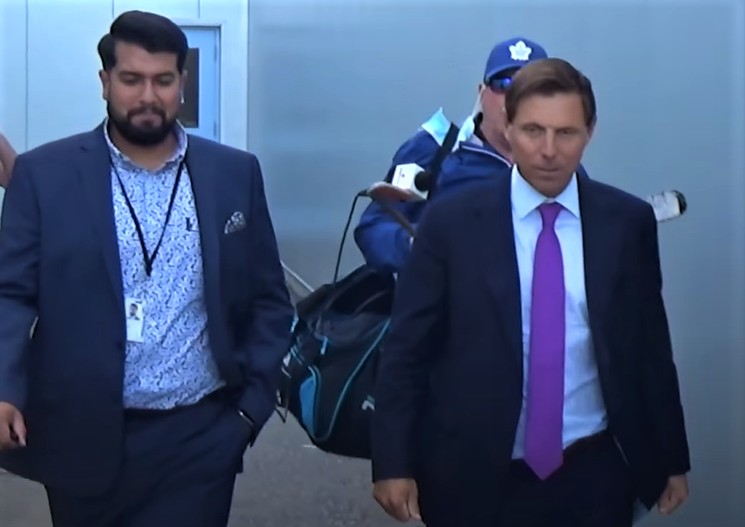 Over a recent seven-day period, from August 23 to 29, Brampton reported 151 new cases of COVID-19, while there were 796 cases across all of Ontario over the same period.

In a city that only has 4.5 percent of the province’s population, 19 percent of all new Ontario COVID-19 cases over the seven days were reported in its fourth largest municipality.

It’s a continuing trend, but despite the disturbing infection spread in Brampton it doesn’t appear that the City or local public health officials have a plan to reduce the rate.

Last week, Peel’s top public health doctor, Lawrence Loh, said the numbers are “disappointing and concerning”, pointing out that half the recent cases in Peel are among those 21 to 50 and half of the new infections were contracted through work, social gatherings or travel.

The Pointer observed numerous large gatherings of young people in the city over the past week, in parking lots, near restaurants and in other random locations where youth are congregating without practicing social distancing or wearing masks.

Parents and teachers in the city have told The Pointer they are deeply concerned about Brampton's poor performance, as students soon head back into classrooms across the city, while infection risk is only increasing. Peel District School Board teacher Lisa Dunbar, who has two kids of her own returning to class, said Brampton's high COVID-19 case counts are a cause of added concern for her.

Loh reminded all work places, bars and restaurants to maintain safety plans and enforce proper social distancing, the wearing of face coverings and other sanitary measures. But it’s clear, from the persistently high numbers in Brampton, that words are having little effect on the rate of viral spread.

As of August 28, Osler reported that 52 “COVID-19 suspect” patients were being treated in Osler hospitals. The organization also runs Etobicoke General, as well as Brampton Civic and Peel Memorial, but it does not provide a breakdown for cases in each individual hospital.

According to its website, testing is still in high demand. “We are currently seeing high volumes and we ask for your patience and cooperation. If you are not able to receive a test when you arrive, please return the following day, as per the Assessment Centre’s process.”

Osler has no information about increasing the number of screening facilities in Brampton, to help get the high infection rates down. In June, the province, concerned with the situation in the city, had set up pop-up testing facilities, but these were temporary and usually in place for just one day, in hotspots where due to outbreaks or clusters the spread needed to be controlled.

Public health officials have said that higher density living arrangements can be one cause of increased viral spread, along with exposure at work. Critics have questioned if the large number of crammed illegal secondary units or basement apartments is one reason for the city’s problems.

It has been estimated that there are at least 50,000 such illegal units in the city and councillors have reported that more than a dozen people, sometimes more than 20, commonly live in these apartments. The City of Brampton has not laid out a plan for addressing the possibility of high infection rates that might be caused because of common living arrangements across the municipality.

During the same seven-day period, from August 23 to 29, Mississauga reported 49 new cases of COVID-19. When factoring population, Brampton had about four times the per capita rate of COVID cases during this period, compared to Mississauga, a trend that has continued for weeks. It suggests different issues in the two neighbouring cities which share a long border, and the possibility that Mississauga’s approach to enforcement, which has focussed on education, may be having a positive impact. Meanwhile, critics have said Brampton’s heavy-handed approach, handing out stiff fines for failing to comply with safety measures, might be pushing more people to deny breaking rules or being in places where the virus has spread, fearing that if public health officials try to trace cases to possible contact points, fines or other harsh penalties might be handed out.

Mississauga has maintained double the number of testing sites throughout the pandemic compared to Brampton. It’s unclear why the City of Brampton has not pushed for another testing facility, or even come up with its own plan to get more screening set up.

Earlier in the pandemic, Brown boasted that Brampton had the highest testing rate in the province, but he was mistakenly using figures that included two screening sites in Etobicoke, while Brampton only had one screening centre where testing rates were far below the per capita target set by the province. 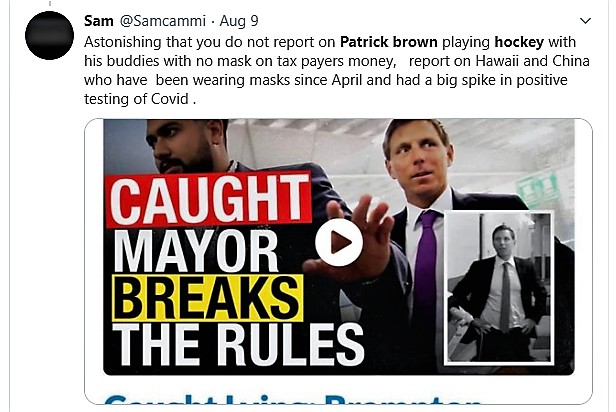 He has been heavily criticized on social media after being captured on video twice at an indoor hockey arena in Brampton without a mask and failing to practice social distancing, with many accusing Brown of setting a terrible example in a city that cannot get its COVID situation under control.

On one particularly bad day for the city, this past Thursday, Brampton reported 32 cases of COVID-19. On the same day, there were 118 cases in all of Ontario, so, its fourth largest city, with 650,000 residents, had 27 percent of all cases in the province that day.