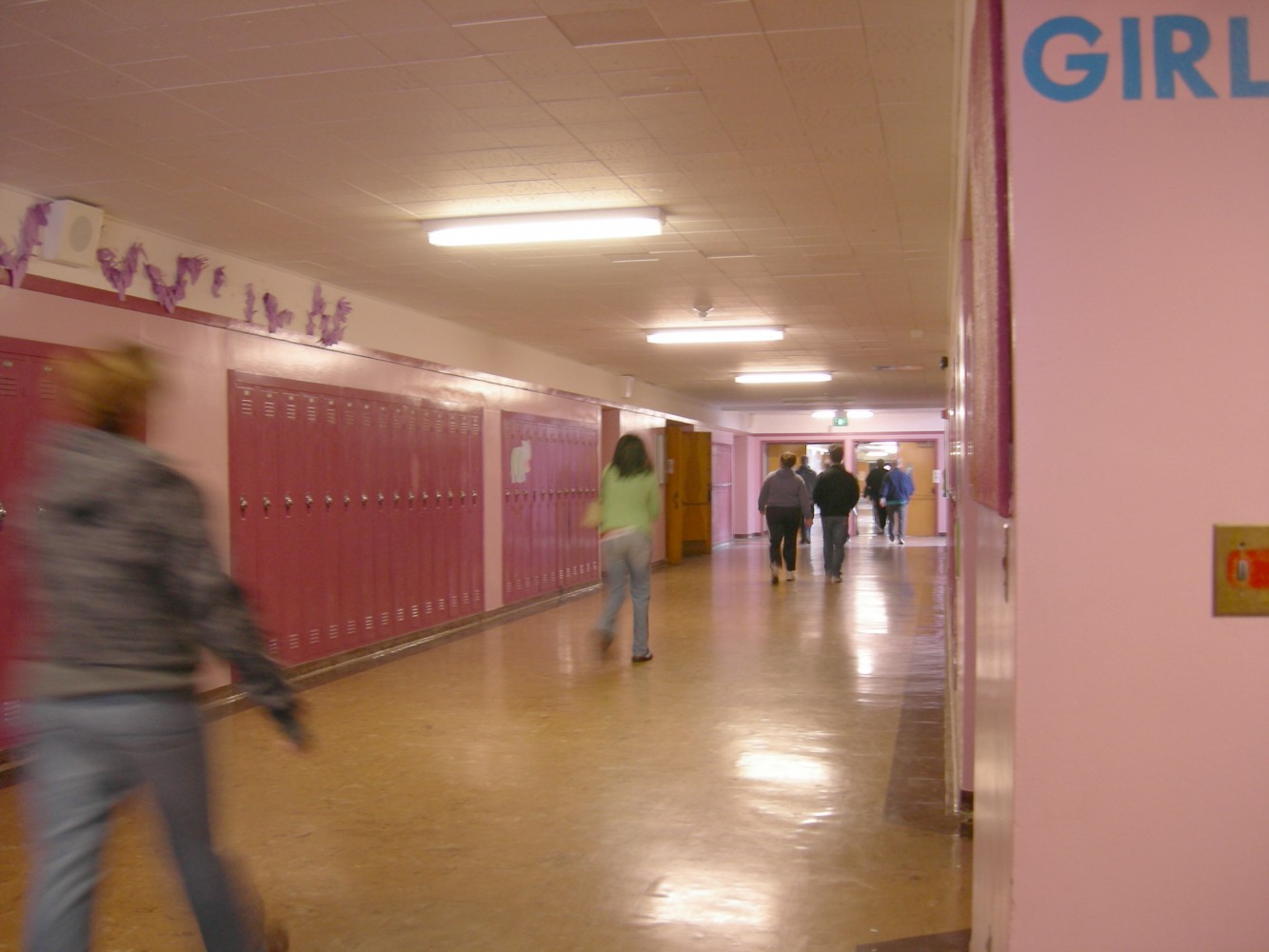 When schools closed in March to slow the spread of COVID-19, Victoria Celestini and her partner were relieved. With the threat of the virus swirling and many unknown factors, the safest option was to keep their two young children inside.

“We were just happy to have them home, safe and sound,” the Caledon mother told The Pointer.

As weeks of home-based schooling turned into months, parents around Ontario began to struggle; working from home and juggling childcare duties was tough. At first, it was a manageable necessity, but as the curve of the pandemic began to flatten, work ramped back up and people returned to their traditional workspaces. 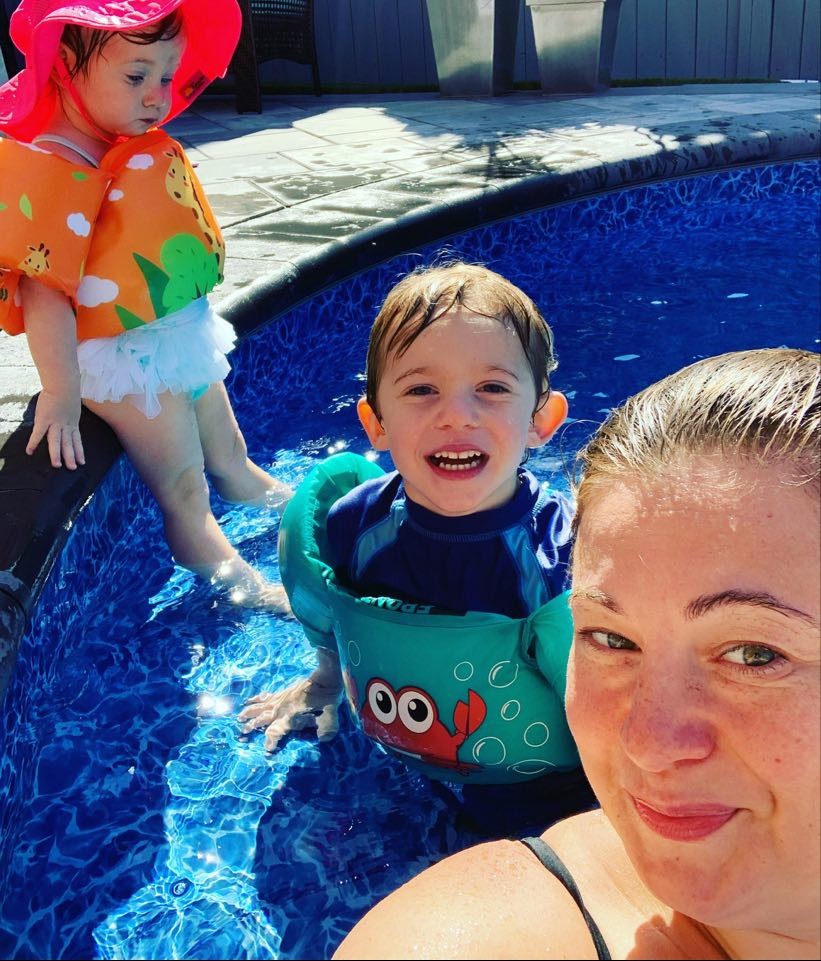 Meanwhile, the quality of online education provided by school systems caught off guard began to weigh on millions of parents who watched their children disengage.

“We both work full-time. My job requires me to be onsite and, while my husband has a work-remote option, the environment at home with both kids there full-time is not conducive to either his job or the kids getting his quality time,” Celestini says. “Thankfully, I work for a family business and I was able to leave my post to be home with them and relieve some stress (during the peak of the pandemic), but ultimately I had to return to work; as many other working parents did.”

As spring turned to summer, a cohort of parents became increasingly frustrated by slow provincial decision-making on the 2020-2021 school year.

The dawn of Stage 3 this Friday (everywhere apart from Peel, Toronto and Windsor-Essex) means gyms, indoor dining and bars will reopen. The clarity provided for recreation, eating and drinking is in stark contrast to the messaging around education. Parents continue to wait for answers on exactly what the school year will look like when it begins in September.

This week, Peel District School Board laid some of its cards on the table, publishing a public notice explaining plans for a return. Under the Ministry of Education’s three-pronged proposal for the upcoming school year, local boards are being asked to consider different scenarios: full-attendance, hybrid attendance and no in-person teaching at all.

A recent ramping up of rhetoric from Queen’s Park suggests the province’s preference is for in-school learning, but nothing is concrete.

Speaking at a press briefing on Wednesday, July 22, Ontario Premier Doug Ford referenced some unofficial polling he had done while he was recently in Mississauga.

“Nine out of ten parents, especially moms, are telling me ‘I want my kids back in school’,” he said. Responding to a separate question, he added: “Families want certainty when they go back to work that they’ll be there five days per week. I’ve mentioned this to the Minister, he understands people want five days per week and he’s working with the boards and making that clear.”

He went on to say hybrid and online models were essentially plans B and C, only to be used in the event of a significant resurgence of COVID-19.

Peel District School Board has not been as candid.

“We understand it is the government's preference to see all students back in class full-time, but this has not been finalized,” Jaspal Gill (Interim Director of Education) and Bruce Rodrigues (Supervisor, appointed to replace the board of trustees in June) said in a statement to parents. “The Ministry has indicated that student attendance for in-person learning will be voluntary and that students who do not attend in person will be engaged in distance learning.”

School days may also be shorter to allow for distance learning to also take place and offer teachers time to prepare, the pair wrote.

PDSB plans to present its proposal for a return to school to the province next week, with guidance issued by “early August”. Then, by mid-August, the board will canvas families to gauge their intentions regarding student in-person participation, so it can draft bus routes and create groupings (to limit interaction and prevent viral spread).

Finalized in-depth details about a return to elementary and secondary schools (such as which days each student will attend and who they will share school space with) will not be available until August 28. Secondary timetables will be released by September 4.

According to PDSB, the first day of class for students will be September 8.

“Parents across the province, as we know, have been juggling looking after kids at home, keeping this remote emergency distance learning, while many of them have been working at home,” NDP Education Critic, Marit Stiles, told The Pointer. “Over the past few months, as parents put to bed — so to speak — the 2019-2020 school year, they woke up the next day and realized, ‘Oh my goodness, I am going to have to do this again’.”

The reopening of schools is complicated. With physical distancing measures in place, the return of all students to the classroom would necessitate more teachers and perhaps even more classroom space. In Peel, as Brampton and Mississauga’s populations have skyrocketed in recent years, classrooms have struggled to keep up with growing student numbers.

In 2019, St. Thomas Aquinas Secondary School, located in Brampton, had 22 portables to help house about a third of the school’s 1,937 students. St. John Fisher Elementary School had 10 portables, according to a spokesperson for the Dufferin-Peel Catholic District School Board.

The movement of teachers between classrooms would also be limited and enhanced cleaning protocols (many of which PDSB confirmed this week) would also be in place.

It remains unclear whether masks or face coverings would be mandatory in schools (they have been mandated in other public spaces in many cities across the province) and at what age children would be ready to follow physical distancing, handwashing and proper mask protocols.

At a media availability in Mississauga on Thursday, Education Minister Stephen Lecce promised more details on the school year next week, including guidance for in-classroom masks. Exactly how fulsome these new details will be is unclear — the province is attempting to balance clarity and detail with the risk of a totally different infection picture by September. 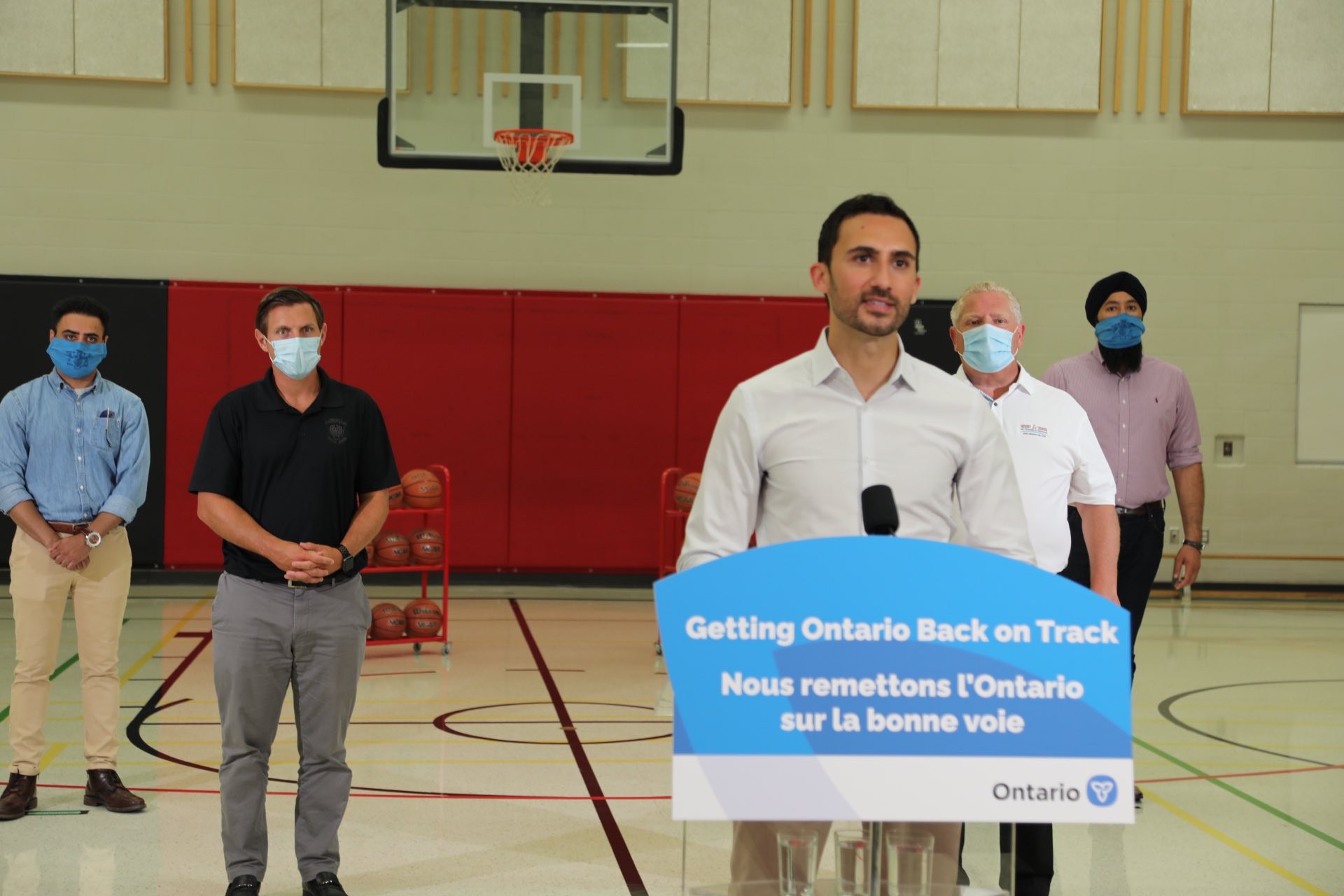 Education Minister Stephen Lecce during an announcement on Thursday in Brampton.

In light of these concerns and others, some parents are scared to send their children back to school.

In Brampton, in particular, COVID-19 cases have failed to fall significantly compared to the numbers achieved by other cities. On Tuesday, Mayor Patrick Brown took to Twitter to celebrate just eight new cases in his city on July 20. He said he was “encouraged” by the sign. The next day, new cases jumped back up, with 24 reported in the city.

With the curve showing a reluctance to flattening in Brampton, some parents are stressed about a return to in-classroom teaching. Discussing the issue in a Facebook group for Peel Region, several said they were simply not ready to let their children go back. They described themselves as “scared” and said it was “not worth” the risk.

Sheila Penton, a Mississauga parent of a 9-year-old boy, told The Pointer she is not confident schools can provide a safe learning environment until the virus is completely gone.

“I'm not sure I'll feel comfortable until there is a vaccine available. I don't know that it's realistic to expect children to remember to follow all of the protocols that will need to be in place to keep them safe,” she said. “My child attends a school with a large number of students. I'm not sure how they will be able to implement the required changes. But I have faith in them and their communication to families.”

There are no easy answers when it comes to balancing children’s safety and the strain of work. Each family has handled the situation differently, but there is emerging evidence of the damage the situation is causing for working women. 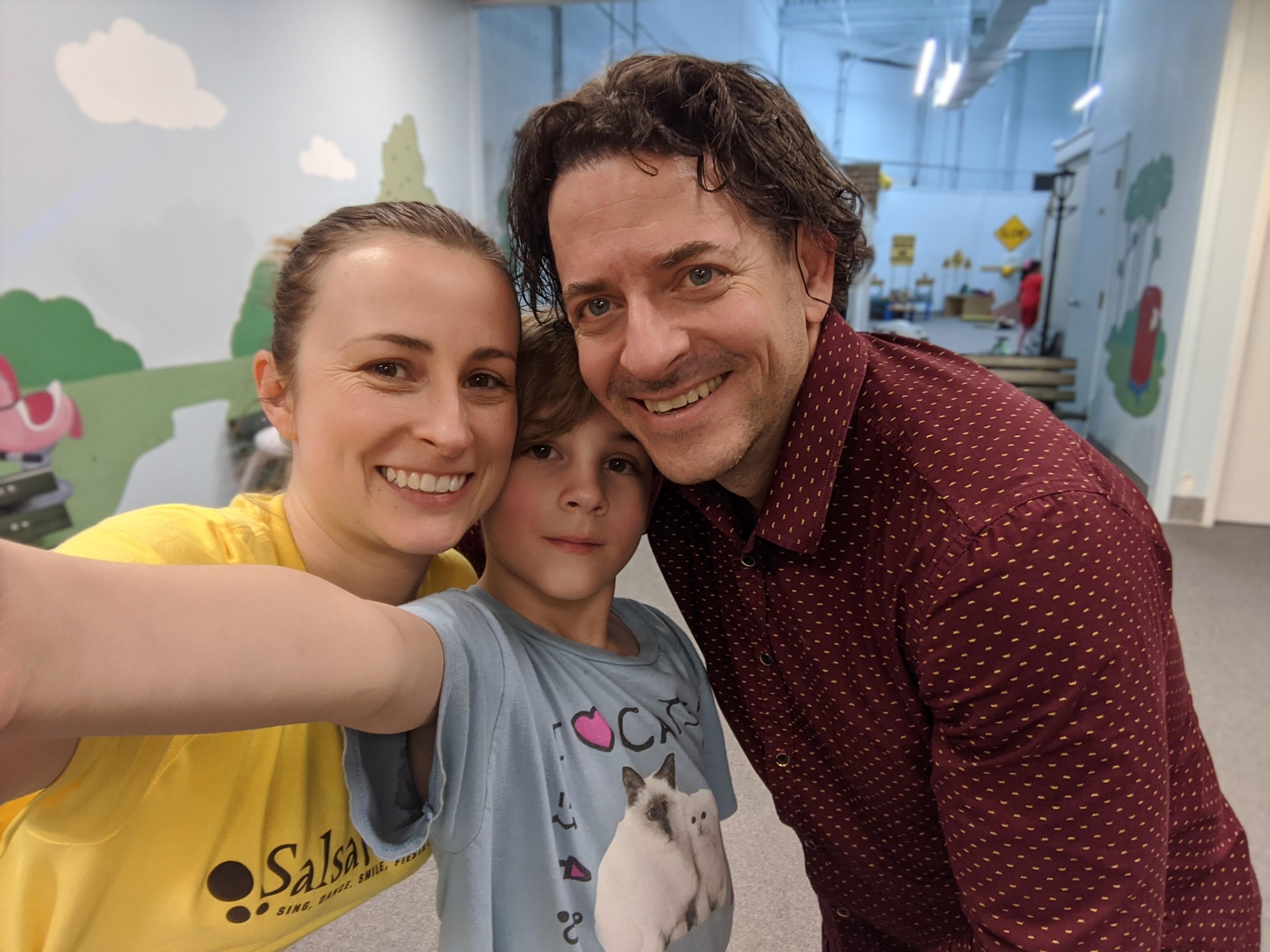 Sheila Penton (left) and her family.

Research published last week by RBC found women’s participation in the workplace dropped to 55 percent in April, a low not experienced since the mid-1980s. The study suggested patriarchal gender roles played a part. Employment for women with toddlers or school aged children between February and May dropped seven percent, compared to four percent for fathers with children the same age. Single mothers were even more significantly impacted, with employment down 12 percent from February to June, versus seven percent among single fathers.

“Unlike my husband (who can work remote full-time) I need to be onsite,” Celestini explained. “However, I am still faced with the challenges of being ‘mom’: cooking dinner, doing the cleaning up and ensuring my kids and husband get the best part of me at the end, each day. An extended school closure is not sustainable for any parent who needs to work away from home. It shifts all the responsibility to one partner (and keep in mind that's for families who are lucky enough to be in a partnership), what about single parents?”

According to the researchers, only 29 percent of women were the primary household earners in the data they surveyed, meaning they were more likely to give up their job to look after the family. 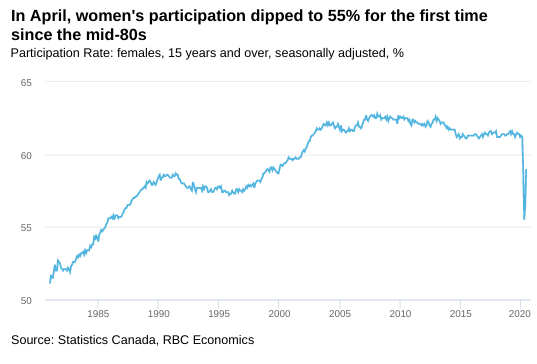 The COVID-19 pandemic led to significant job losses for women. Childcare duties were one of the factors cited by researchers.

Penton has felt the brunt of this shift, but says her children come first.

“For me personally, having my child at home does restrict some work options, and as the lower income earner I would be the one working less to be the care provider,” she said. “Thankfully, our family is in a position that we can manage that. And to me our health is the most important thing.” 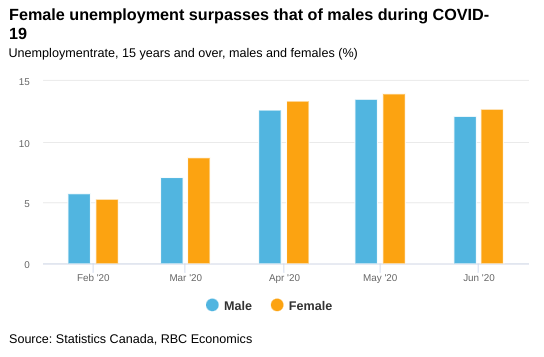 Before schools closed and the COVID-19 pandemic hit, a higher proportion of men were unemployed than women. The economic issues caused by the virus reversed this trend.

For now, parents in Brampton and Mississauga will continue their sacrifice, trying to balance work, childcare and education. Most will count the days in August, ahead of the start of school, in a chaotic year that seems like it’s never going to end.