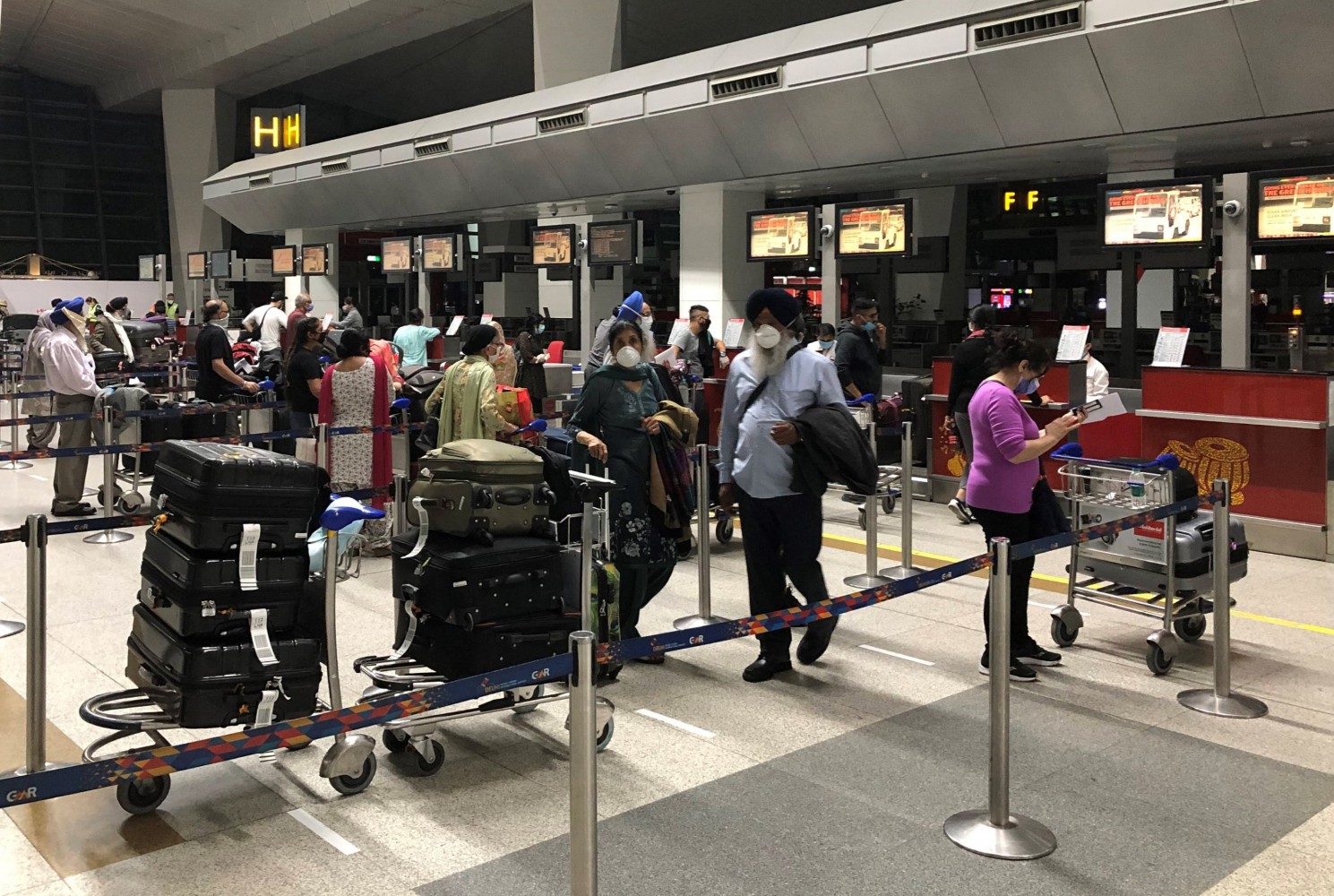 The federal government has confirmed as many as 15 additional flights are planned between India and Canada in an effort to bring stranded Canadians home.

The news comes after a week of confusion spurred by word that India was suspending domestic and international flights until May 3 as part of extended lockdown measures.

During a tele town hall meeting hosted by Brampton’s MPs last week, François-Philippe Champagne, Canada’s Foreign Affairs Minister said upwards of 3,000 Canadians had been brought home from India through a series of flights at that time.

But thousands more are waiting to come home.

“The situation in India is challenging,” the Minister said. “I know about the situation in every state.” Champagne told Brampton residents there are plans to bring Canadians home from India every other day, a practice that will continue for up to three weeks. 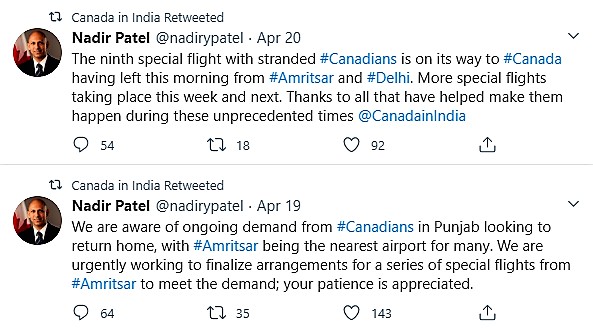 Nadir Patel, Canada’s High Commissioner to India, and the government have been tweeting regular updates

On April 21, Brampton North MP Ruby Sahota tweeted that in addition to the 9 flights that have already occurred, 15 additional flights are planned between India and Canada over the next 17 days to bring Canadians home. According to a tweet from the High Commission of Canada in India, flights are scheduled from Bengaluru, Mumbai and Delhi.

It remains unclear whether these flights will be enough to meet the needs. According to the Asia Pacific Foundation of Canada, an estimated 40,000 Canadians were stranded in India on March 25 due to COVID-19 related restrictions put in place when Prime Minister Narendra Modi suddenly locked down the country. 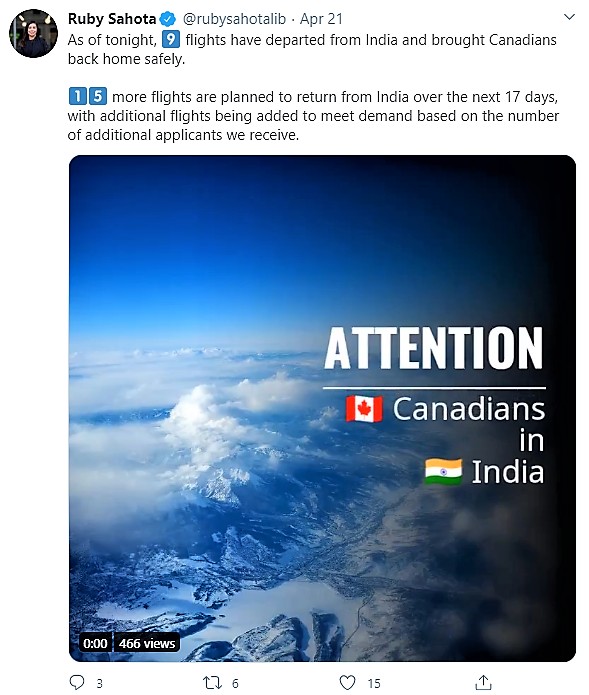 Many of these Canadians stranded in India reside in the Region of Peel where close to half-a-million South Asian-Canadians live.

Many now-retired residents travel to India for long stretches during the colder months, and had been in the country long before the lockdown was announced without notice. Prime Minister Modi has since apologized for the mismanagement and widespread chaos the move has caused. 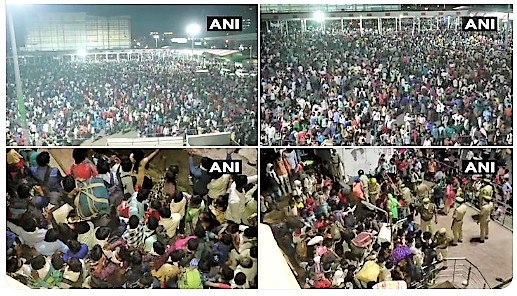 On Wednesday, Prime Minister Justin Trudeau recognized the need for additional resources to bring Canadians home from abroad during the COVID-19 pandemic.

“We are very aware of the challenges faced by Canadians all around the world who want to return to Canada at a time when international flights are extremely limited. We continue to work with governments around the world, including the Indian government,” he said, noting that over the past month the government has helped bring back approximately 20,000 Canadians on repatriation flights.

The trip back from India is not cheap, as residents have to pay approximately $2,900 for the one-way ticket, about three to four times the cost of a typical airfare. They are secured on a first-come, first-served basis and residents must use the web portal to register for the flights.

Many have taken to social media to voice their displeasure about the way the repatriation effort has been organized and the cost of the tickets.

“There are particularly high demands in some parts of the world including India, and we are working very, very hard, day and night, to try and resolve them. There have been many flights back from India, but there is a need for more,” Trudeau said.

The situation in India is also a potential motivation to return Canadians home from the country as soon as possible. While everyone returning will be put into mandatory 14-day isolation under the Quarantine Act, with the virus spreading quickly in India, the potential for infection among those looking to get home to Canada grows each day.

Since the start of the COVID-19 pandemic, India has been described as a potential hotspot for infection, with a potential case count feared to be in the hundreds of millions if quarantine measures are not successful. India’s healthcare authority has largely failed in its efforts to halt the pandemic, according to many medical experts and epidemiologists who fear the country’s efforts to contain COVID-19 have been woefully inadequate.

As of April 23, India had nearly 22,000 cases of the virus and 681 deaths. However, this is widely viewed as only a fraction of the true number of infections in the country of almost 1.4 billion people due to a lack of adequate testing.

As of March 13, India had only tested three people per million for the virus, in stark contrast to South Korea, where more than 4,800 people per million had been tested by the same date, an effort that has dramatically reduced the spread in that country.

Although testing in India has since stepped up, epidemiologists in the country have noted the window to effectively identify and contain the spread was much earlier, in February and March, and it’s widely believed the virus has now spread throughout much of the population, but it’s impossible to assess the actual number because of the lack of testing.

India’s poor public healthcare system is another problem, and with an estimated 800 million people living in its underclass, access to hospitals and proper care for many is limited.

On April 6, the Indian Council of Medical Research (ICMR) announced efforts to scale up testing and analysis in the country, noting that a combination of 235 government and private labs have a testing capacity of 18,000 tests per day and has measures in place to move to 24/7 processing should things descend into a worst-case scenario.

Those who remain stranded in India are urged to register through the Registration of Canadians Abroad (ROCA) program to get information about returning home.

At this point, it remains unclear how seats will be designated on the 15 flights scheduled over the coming weeks.