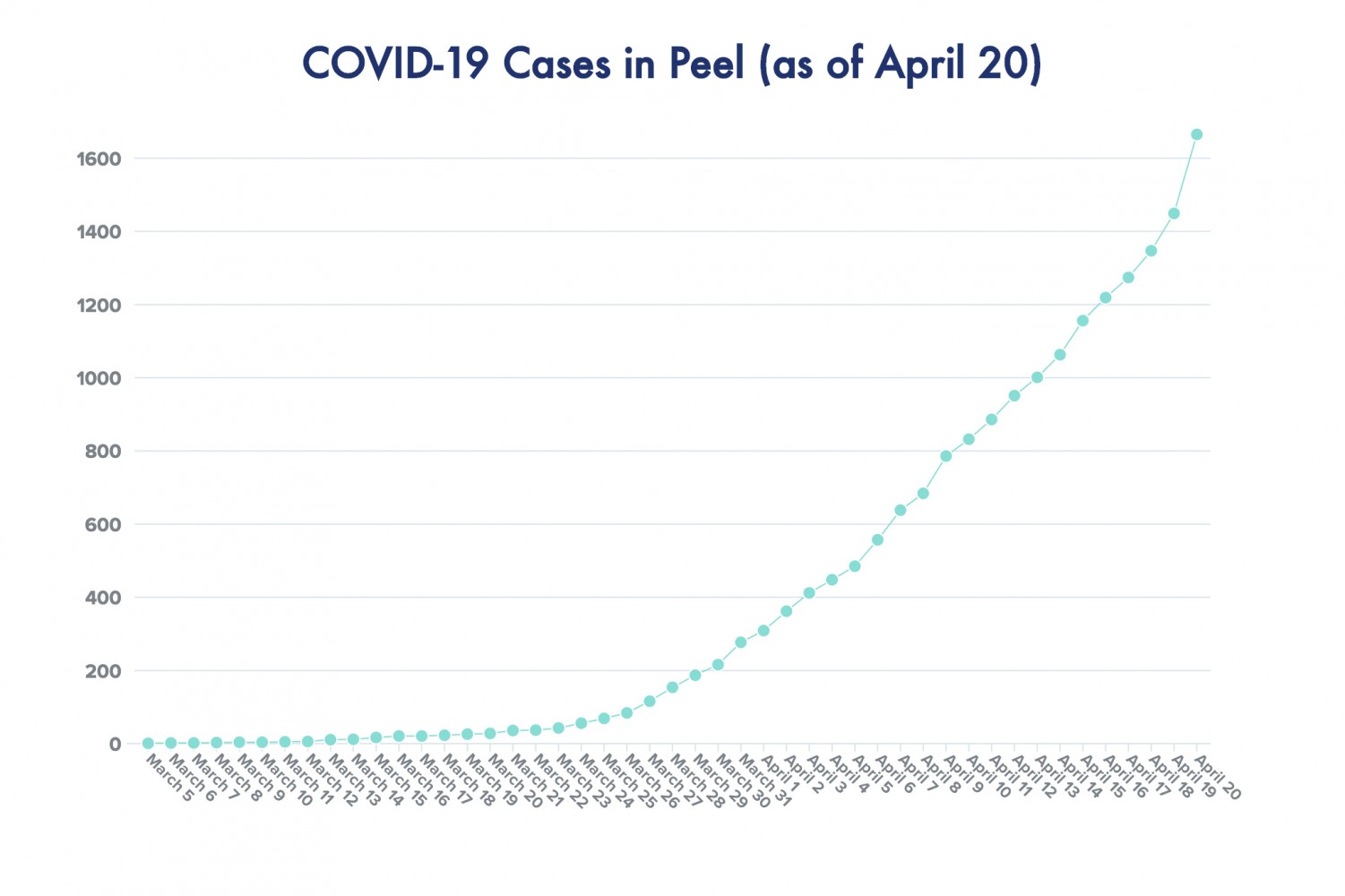 There is cause for cautious optimism.

Over the last week, Ontario’s infections have been increasing by between 5 and 7 percent each day. For health officials, this appears to be the top of the “curve” that many in the province have been hearing so much about over the last few months. The goal has been to reach this flattening out point as quickly as possible, instead of continuing to watch as the curve keeps rising higher.

According to Adalsteinn Brown with the Dalla Lana School of Public Health, a scientist and former assistant deputy health minister who is now part of the province’s COVID-19 team, it is “hoping” to start seeing a reduction in cases in the coming days, something previously not expected to occur until the middle of May.

However, for the Region of Peel, the potential good news was dampened by a spike of 216 new cases and 9 additional deaths reported Monday, the largest single-day increase in new cases the region has seen since the start of the pandemic at the beginning of March. 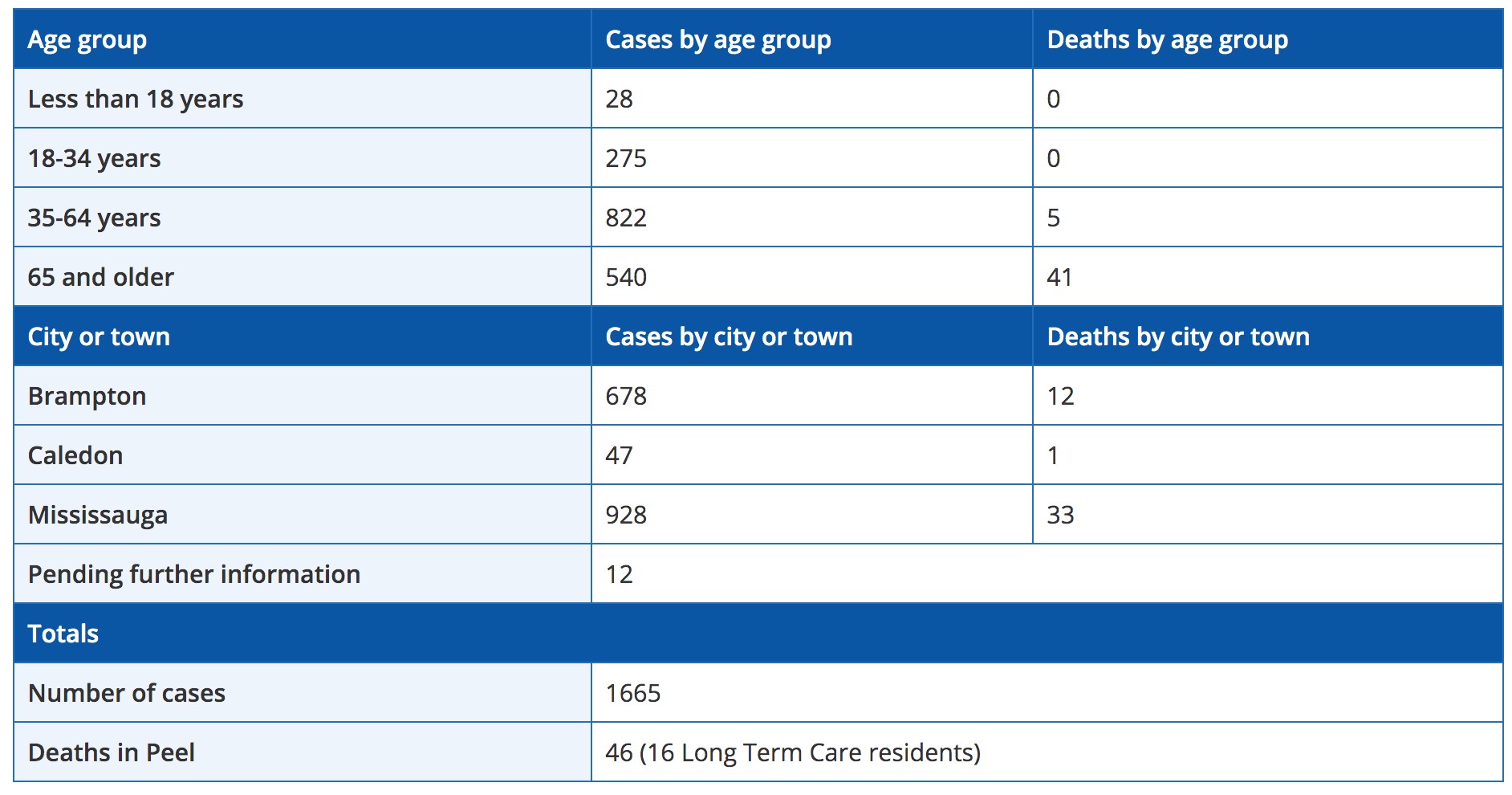 A breakdown of COVID-19 cases in the Region of Peel as of April 20.

“They can be a little bumpy,” Brown said of these “peak periods” in pandemics, which typically follow what is called Farr’s Law, where the incremental rise in new cases at the start, is followed by a nearly identical decline in the number of new infections as the pandemic starts to fade.

“The peak is not just one point in time, the peak can last a bit,” explained Dr. Barbara Yaffe, the associate chief medical officer of health for the province. “It will not be a light switch on-off, it will be gradual.”

The new modelling shows Ontario trending toward a best case scenario for infections when compared to its previous projections. At the beginning of the month, the province expected about 80,000 people would be infected by the end of April under the measures that were in place at the time. Now, the province is saying, thanks to enhanced social and physical distancing and other public health interventions, the expected number of cases at the end of April is estimated to reach 20,000, which is much closer to the best-case scenario presented at the beginning of April, of 12,500 infections by the end of the month with “full” intervention.

However the picture is not as positive when looking at the number of deaths. On April 3, when the first projections were announced, the worst-case scenario for the end of April was 1,600 deceased and the best scenario was 200, with full intervention in place.

Currently, Ontario has 11,561 confirmed cases of COVID-19, including 591 deaths. Nearly half of these cases (5,515) are marked as resolved. If the number of deceased doubles by the end of the month, that would mean close to 1,200 fatalities from the virus.

But the reason Ontario is trending toward a worse scenario is because of the unexpectedly high number of deaths in seniors’ facilities, which currently account for about half of all deaths. This high death rate in such facilities was not accurately predicted in the original model.

But the overall modelling for infections is reason for cautious optimism, as long as social distancing and self isolation continues.

“We should all be proud,” said Premier Doug Ford during a press conference Monday. “We have so far avoided the worst case scenario.”

“There’s some light at the end of the tunnel,” he said.

This message of hope was delivered with the caveat that Ontarians need to stay the course and continue to stay home. The emergency order in the province will remain in place until the end of May, as Ontario is currently battling COVID-19 on two fronts.

The province is turning the tide on community spread, reducing the rate of infection as people continue to stay home. It’s a different story in the province’s long-term care homes, retirement homes and other congregate settings like homeless shelters and correctional institutions, where COVID-19 is currently wreaking havoc.

In the Region of Peel, there are more than 20 institutions currently experiencing outbreaks of COVID-19, resulting in numerous cases and at least 16 deaths, according to Peel Public Health.

At Brampton’s Grace Manor, which has seen its number of cases skyrocket among residents since an outbreak there was declared on April 6, the most recent figures show 15 staff members and 42 residents at the home have tested positive for the virus. It’s reached a point where the owner of the facility, Holland Christian Homes, has sent a notice to families asking them to prepare funeral arrangements, should the worst case scenario arrive for their loved one.

While COVID-19 does not discriminate when it comes to age, the virus is particularly fatal among the senior population. In the Region of Peel, 41 of the 46 deaths from the virus were residents over the age of 65. 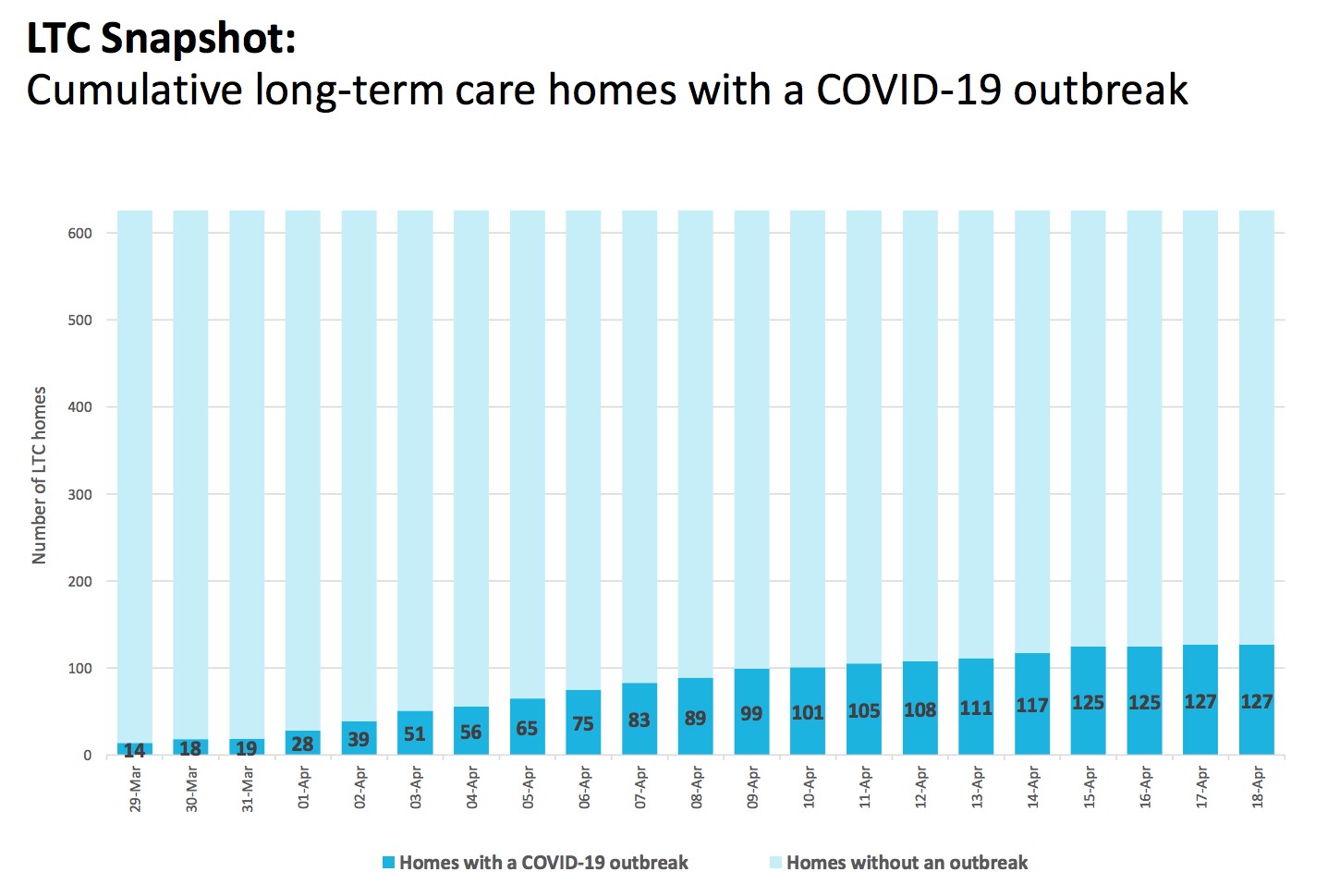 According to Brown from the Dalla Lana School, it means that as Ontario continues to see long-term care homes and retirement residences experiencing outbreaks — there are currently 127 homes with declared outbreaks — what will follow is the inevitable rise in deaths.

“It’s going to have a much bigger impact on mortality in places where there are a significant number of older people. Hence when you see a wave of infections going through long-term care homes it is, unfortunately, going to be followed by a wave of mortality,” he said.

On Monday it was also announced that the Ontario Correctional Institute in Brampton was closing its doors and relocating hundreds of inmates after an outbreak spread through the population, resulting in eight staff and 60 inmates becoming infected with the novel coronavirus.

According to a statement from the Solicitor General’s office, the inmates are being transferred to the Toronto South Detention Centre (TSDC) in Etobicoke where they will be placed in a separate area of the correctional centre to avoid spreading the virus.

“TSDC, our newest facility, has a modern healthcare unit with medical isolation units and appropriate resources, to effectively manage and support inmates with COVID-19,” the statement reads.

“Due to our proactive work to address overcrowding in our institutions, all of Ontario’s correctional institutions, including TSDC, are currently within operational capacity. We continue to work with Peel Public Health to identify and test staff and inmates who may be impacted. All staff from OCI are being asked by Peel Public Health to self-isolate for the next 14 days.”

Provincial officials were quick to remind people that just because the numbers appear to show reason for hope, it is not a reason to start flaunting physical distancing measures.

“Remember that lives are at stake,” said Minister of Health Christine Elliott, who acknowledged with the warm weather approaching it will be tempting to get outside with friends and family, but urged everyone to continue listening to public health officials. “Please resist the temptation to break from that advice,” she said.