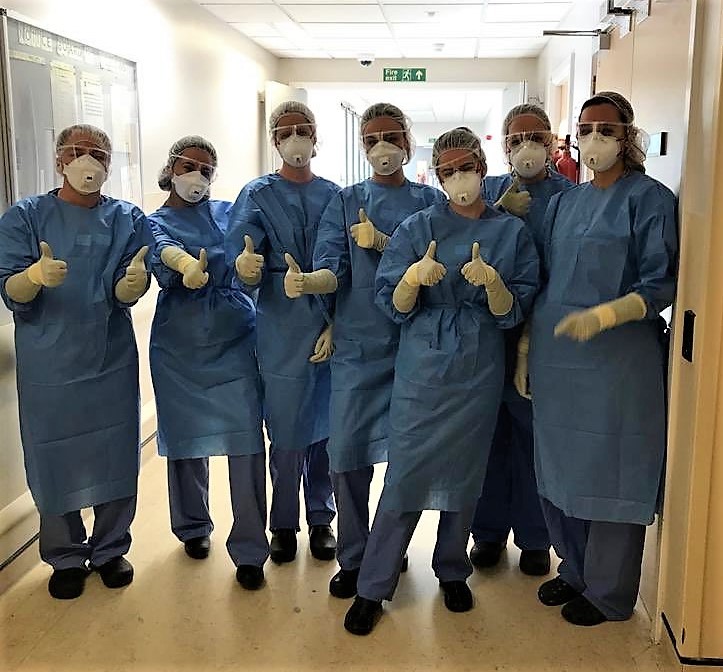 More than 17,800 answer province’s call to arms, but will it be enough for Peel’s hospitals?

Military metaphors and similes have dominated the COVID-19 narrative. On Thursday, Ontario Premier Doug Ford provided the latest in a string of examples, when he described frontline healthcare workers being drafted into long-term care homes as bringing in “the cavalry.”

Borrowing from the Premier’s own analogy, Ontario has been involved in a build-up for weeks. Provinces across Canada and countries around the world have been scrambling to stockpile personal protective equipment, ventilators and tests for the virus.

The numbers in Peel and across Ontario over the past month suggest hospitals are dealing with the early part of the first wave of cases which will likely grow until we see a prolonged decline.

As of Saturday there have been 1,347 cases confirmed in Peel and according to the provincial health ministry, Ontario has reported 10,010 cases, with 4,875 of those now resolved. There are currently 828 hospitalized COVID-19 patients in Ontario, 250 are in ICU and 197 of those are on a ventilator, as of Saturday morning.

But some simple math shows things inside hospitals will get much worse. On the last day of March, there were 1,966 confirmed cases in Ontario. It can typically take about 10 to 20 days from the onset of symptoms, when many get tested, till hospitalization for those whose condition becomes more severe.

The time between a positive test and hospitalization depends on a number of factors, primarily age, but also respiratory health, the condition of one’s immune system and complicating diseases such as diabetes and vascular problems. 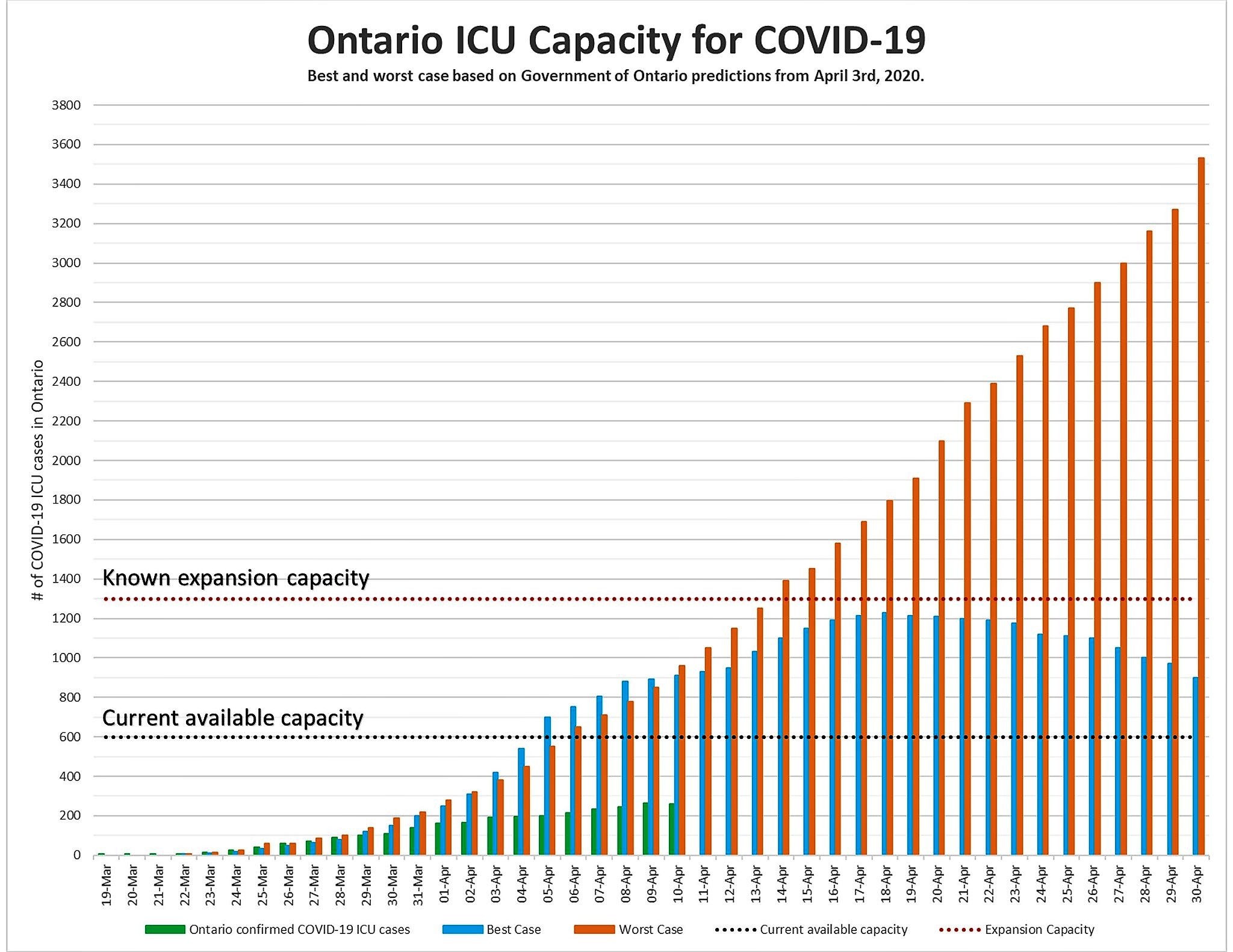 Of the roughly 8,000 positive tests since the end of March, it’s quite likely that most who will eventually end up hospitalized have not yet experienced the more severe symptoms that lead to an admission.

And the overall numbers in Peel and other parts of Ontario continue to climb steadily. The data suggests that certain hospitals are likely bracing for a surge in patients, while those most severely stricken by the virus could need ICU beds and ventilators for a prolonged period of time.

This will lead to a quick depletion of the current capacity.

As of April 15, according to data acquired by The Pointer from Critical Care Services Ontario, there were 2,811 ICU beds across Ontario with ventilators (including almost 1,500 added since the start of the pandemic). Of these, 590 were in use, leaving about 79 percent free. 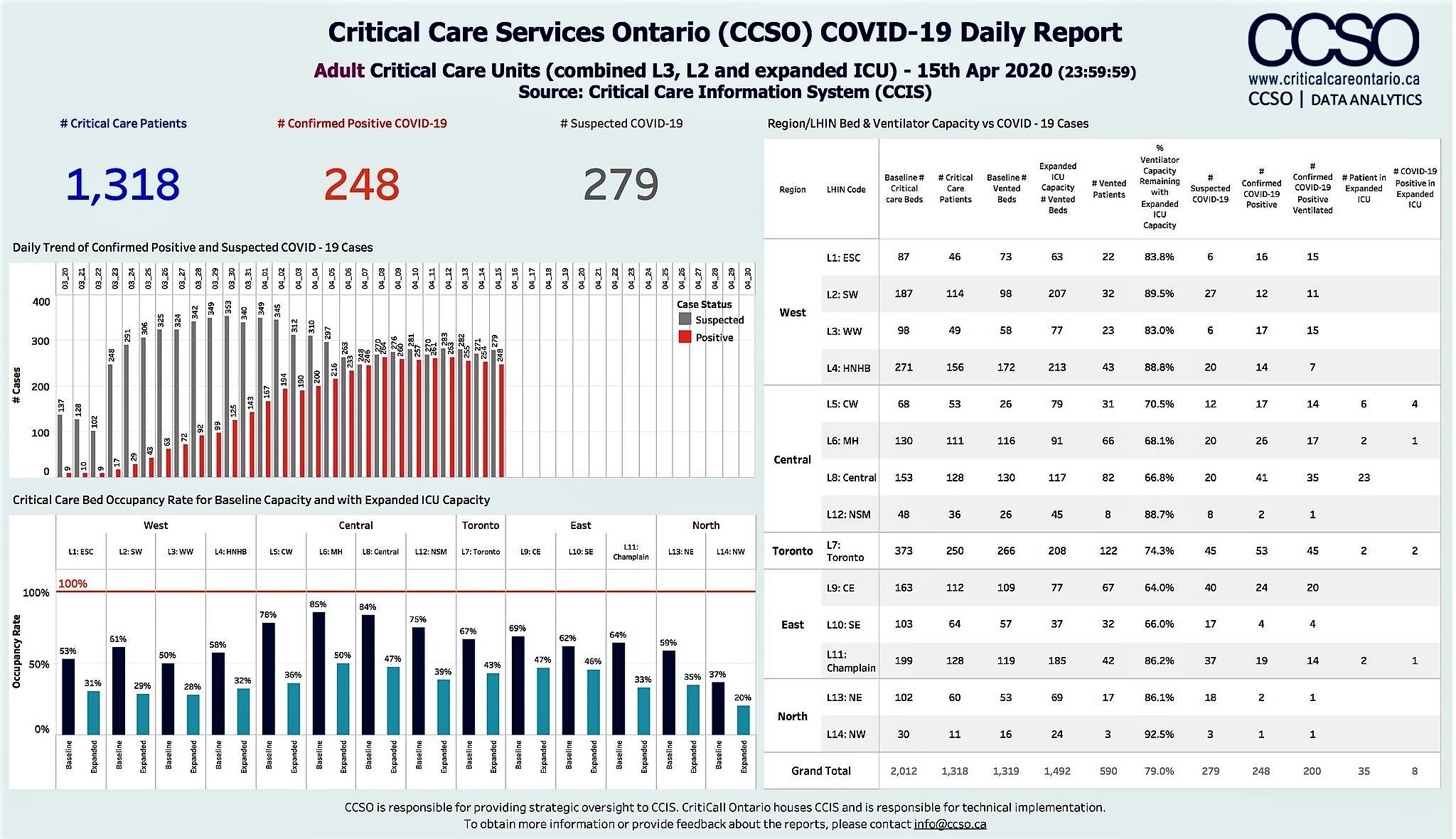 But the fear is that, like in New York City and increasingly in parts of Quebec, capacity can be depleted rapidly once serious infection numbers catch up to the earlier numbers of positive tests. In New York City, its largest healthcare network faced a major blow to capacity during the peak of the crisis when more than 900 hospital staff tested positive, an additional 3,000 called in sick over one 24-hour period and thousands more had to self-isolate because of possible exposure.

It's likely that Ontario's frontline healthcare capacity will take a hit for the same reason (the long-term care sector is already reeling from the loss of available staff), and supplies of personal protective equipment for hospital staff are being rationed with many facilities recycling masks to help ensure frontline healthcare workers will remain protected.

At Trillium Health Partners (THP), which operates both Mississauga hospitals, 76 health workers have tested positive for COVID-19. William Osler’s Brampton Civic also recently declared an outbreak when 10 staff tested positive. Peel Public Health did not return a request for the number of COVID-19-positive health workers in time for publication, but provincial statistics suggest the number could be significant. On Tuesday, the province had 887 health workers who had tested positive, a number that jumped roughly 10 percent overnight to 980 by Wednesday, April 15, but this includes many who work in long-term care settings.

In any rapid military build up, a rifle is only useful if there’s a soldier to carry it; fighter jets remain grounded without pilots.

Extra intensive care units and ventilators are rendered useless without more healthcare workers to take care of the patients around the clock.

In certain areas of Quebec, where COVID-19 has hit hardest partially because of an earlier March break, the province is in talks with Ottawa about bringing in medically trained military personnel to help with their staff shortages. In Northern Italy, at the peak of their crisis, Doctors Without Borders was sent in to help as hospitals became overwhelmed.

“We need thousands and thousands of people, not just a few hundred,” Quebec’s Health Minister, Danielle McCann, said this week. His province now has more than 17,500 confirmed cases.

In the desperate search for medical personnel to ramp up hospital capacity, 40,000 Quebecers volunteered through an online portal that invited anyone with healthcare experience to sign up.

But as of Thursday only 3,000 had been contacted by officials and it’s likely that many of those will not be approved to help.

In Ontario, under emergency powers, hospitals have undergone rapid expansions to meet the increased demand for critical care that’s expected.

Last week, the province announced an online portal designed to recruit foreign trained doctors, students and retired nurses and physicians to the battlefield. A spokesperson for the Government of Ontario told The Pointer more than 17,800 volunteers had signed up as of Tuesday.

It’s unclear how many of these will be approved to help, and while it’s heartening to see so many Ontarians volunteer in such a challenging situation, many of them might not be approved.

For those who are, it’s unclear if they will be centralized and distributed around the province, sent to the areas that need them most or work in their local healthcare facilities. Ontario has 14 Local Health Integration Networks (LHINs).

An order by the province early in the pandemic also instructed hospitals to scale back elective surgeries to free up staff, beds and resources. Initially this had a dramatic effect. On March 25, hospital occupancy sat at 76.6 percent, compared to 96.9 percent on the same day in 2019.

The province says emergency staff are being shared across units, physicians divided around regions and family doctors called up to work in hospitals.

In short — it’s all hands on deck.

“Hospitals are making the best use of their health human resources as they respond to the COVID-19 outbreak,” Miller added. “They have ramped down elective surgeries and non-emergency activities to preserve capacity, and the province has implemented an emergency order to ensure hospital staffing and resources are available to help care for and protect patients during the COVID-19 crisis. These measures provide flexibility for hospitals to identify staffing priorities and develop and implement staffing plans that are in the best interests of patients.” 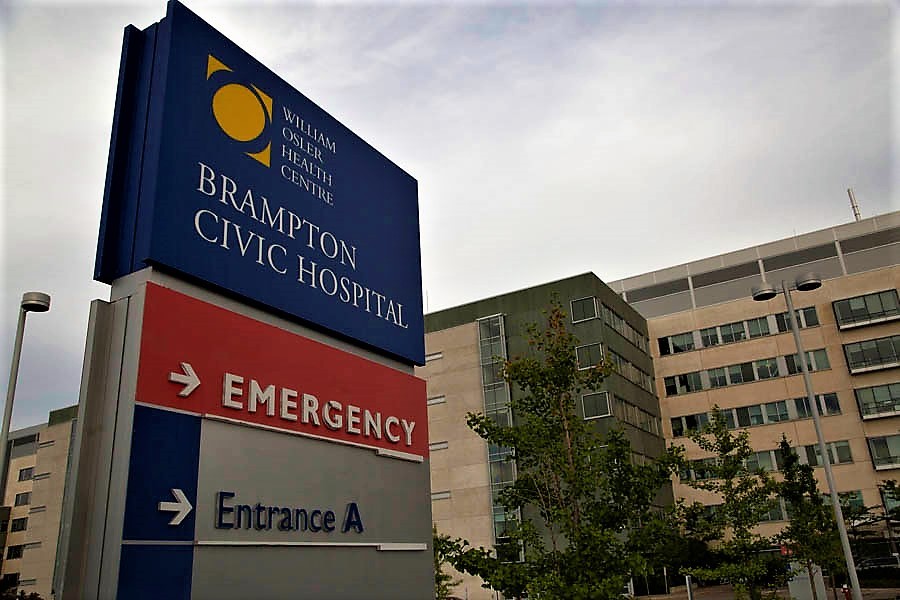 For Ontario’s hospitals, especially those like Credit Valley in Mississauga and Brampton Civic which both struggled before COVID-19 capacity expansions, any reinforcements are good news.

THP told The Pointer it has more than 10,000 staff across its three sites.

Victoria Bettencourt, a spokesperson for THP, said staff remain “nimble” in their response to the virus, working across departments.

“In order to centralize redeployment efforts, THP has created a Redeployment Office which serves to support the redeployment of staff as required in response to changing operational needs through the pandemic period,” she said.

“To support staff in preparation for potential redeployment, THP is providing training and upskilling for all clinical staff in advance of redeployment where required.”

With overall case numbers rapidly rising and the possibility of frontline healthcare workers getting infected or having to self-isolate due to exposure, ramping up capacity will depend not just on extra beds and ventilators, but the human capacity to actually provide the care.