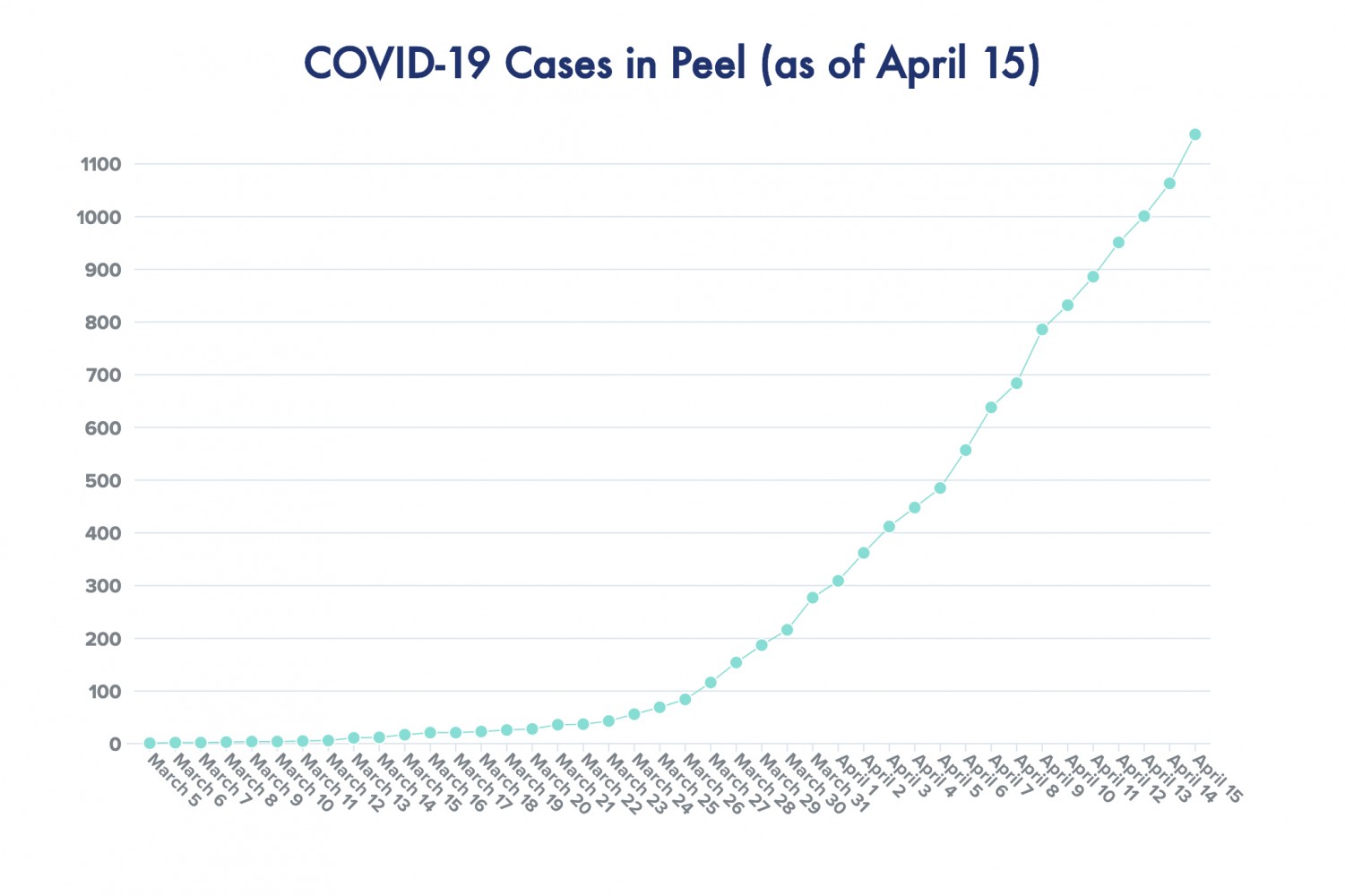 Numbers from Peel Public Health show an additional 93 cases of COVID-19 confirmed in the region Wednesday, bringing the overall total to 1,156.  The region also recorded three more deaths from the novel coronavirus, which has now claimed the lives of 25 Peel residents, six of them in long-term care homes.

The impact on the region’s elderly population continues to become clear as public health data shows that 22 of the region’s 25 deaths from COVID-19 were people over the age of 65. The virus continues to find its way into Peel’s long-term care and retirement homes, with 98 cases confirmed as of April 14.

Across Ontario, numbers have spiked over the last few days, with more than 9,000 cases now reported in the province and over 400 deaths, compared to just over 3,600 cases and 110 deaths as of April 4.

To address the rising number of infections in long-term care facilities across the province, Premier Doug Ford announced an updated action plan to be rolled out over the next 48 hours to protect vulnerable seniors.

It includes enhanced screening and testing measures, stopping staff members from working in different facilities during the pandemic, adding more staff to homes that need it, and working with the older long-term care homes to increase isolation capacity.

The province is also deploying teams to the hardest hit facilities that will handle infection control and measures to help vulnerable residents, often looked after by low-wage staff in private facilities who have limited training.

In older facilities, it’s common for residents to share rooms with one or more people. The province is now planning to work with these homes to find ways to increase their ability to isolate residents, including moving residents between different homes to free up space.

“My heart breaks for these families,” Premier Ford said Wednesday.

The PC government has been criticized for its handling of the long-term care situation, with many critics pointing out measures have not been stringent enough to protect the vulnerable residents in these homes.

Premier Ford, along with Merrilee Fullerton, the minister of long-term care, pushed back against these criticisms Wednesday, with Fullerton noting the province has acted “swiftly and decisively” to protect long-term care residents. Existing measures in place included screening for residents and staff members and limiting visitors to the home to limit the spread.

“This wasn’t just the first thing we’ve done…this is an enhancement,” Ford said.

He admitted, from a broader perspective, the entire long-term care system needs to be fixed, as COVID-19 has exposed many cracks and holes in the system.

“I think we have to,” Ford admitted, when asked whether the long-term care system needs to be reformed after the pandemic. “This will give us an opportunity to fix a lot of things, not just long-term care, but government as a whole and how it runs.”

“This is a wake-up call to the world,” Ford added.

The move to enhance long-term care response comes less than 24 hours after the provincial government extended its emergency order until May 12, signalling social and physical distancing measures will be in place for at least another four weeks across Ontario.

On Wednesday, Brampton confirmed an additional 39 cases, bringing the city’s total to 482, and Mississauga saw an additional 51 cases, reaching 622 infections since the start of the pandemic. 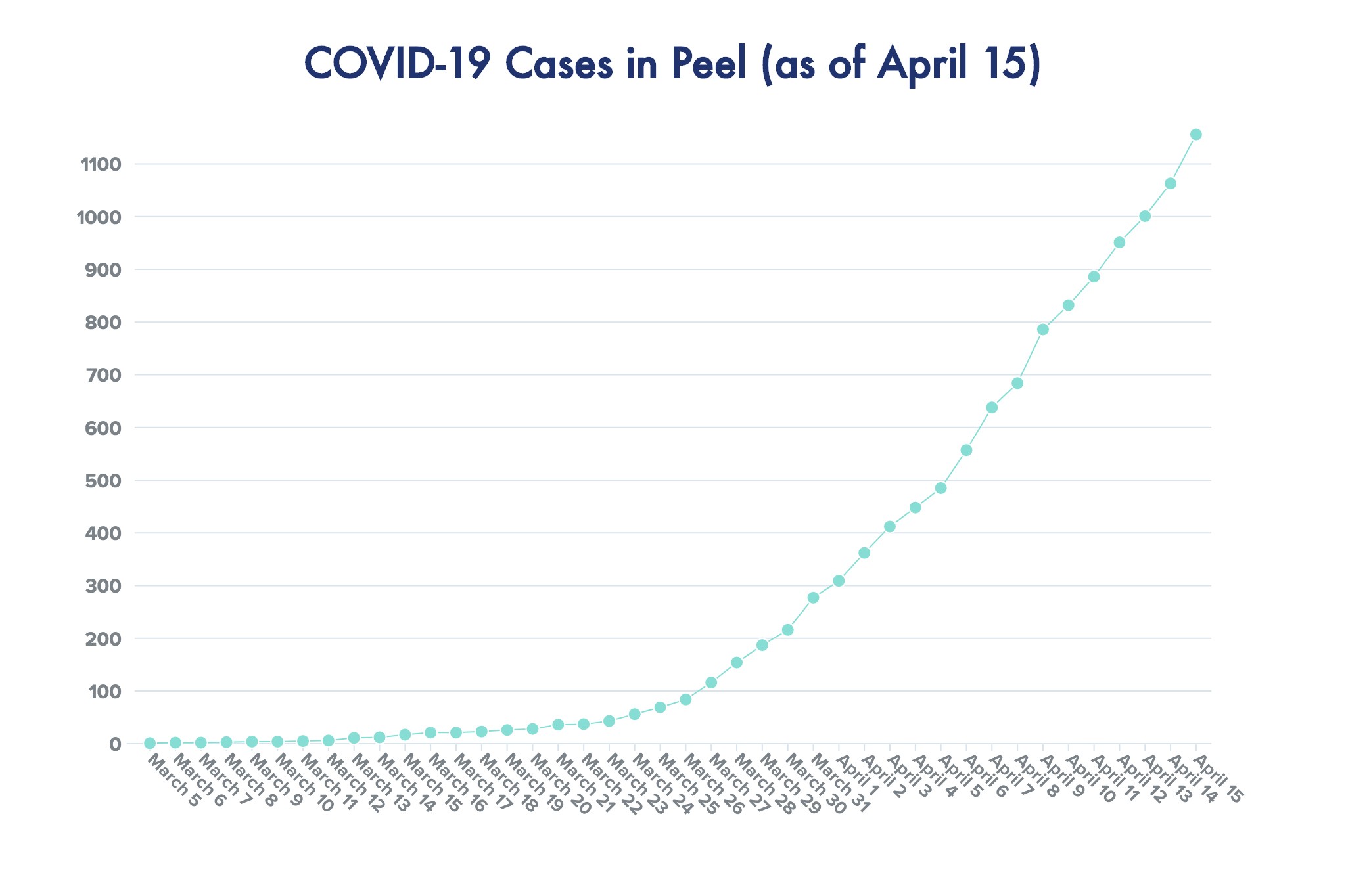 One of the confirmed cases was a Mississauga firefighter, the second among the city’s fire service to test positive.

“Public Health has confirmed that a second City of Mississauga firefighter unrelated to the first has tested positive for COVID-19. We are aware that Public Health reached out to those in direct contact with that individual and those direct contacts are in self-isolation. The station is closed for deep cleaning but fire operations remain normal. Enhanced cleaning protocols have already put into place for Mississauga fire stations and fire vehicles,” reads a statement from Catherine Monast, a spokesperson for the city.

Something that’s becoming routine are the claims of public health officials in the region and spokespeople for public institutions, who state that those public employees who have tested positive, did not acquire the virus at the workplace. Similar language is being used that makes it unclear how these individuals got infected and how officials can be sure they didn’t contract it through their employment.

It remains unclear why public officials would make such statements without knowing conclusively that staff did not contract the virus through their work.

While the numbers continue to rise, both healthcare networks in Peel appear to be managing the increased need created by COVID-19 patients.

At Trillium Health Partners there are currently 92 patients being treated for COVID-19 in its two Mississauga hospitals, 24 of whom are in critical care. At William Osler Health System, which manages Brampton Civic and Etobicoke General, 37 patients are currently being treated for COVID-19, 19 of them in critical care, but there is no breakdown available by hospital.